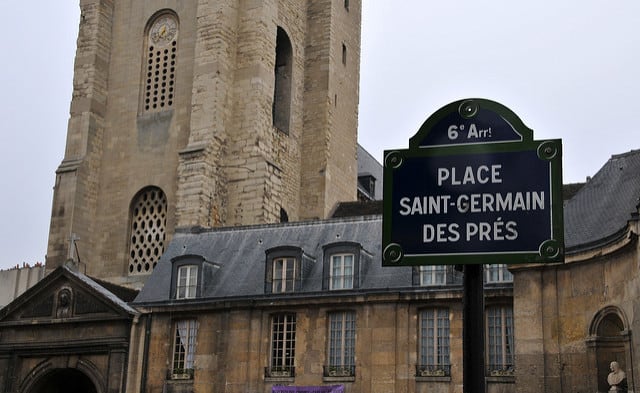 The mythical area of Saint-Germain-des-Prés in Paris is rich in history, culture, and architecture. This neighborhood in the 6th arrondissement is known as a hub for writers, artists, and other creative types throughout the 19th and 20th centuries. 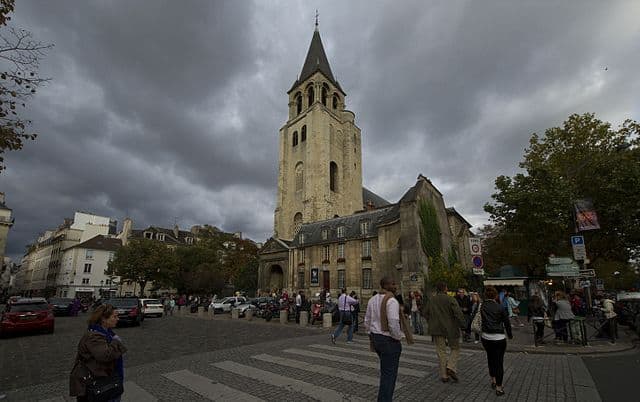 I lived just next door to this area for about 6 months, and it was really special for me as a writer. Greats such as F. Scott Fitzgerald, Ernest Hemingway, and Ezra Pound formed a group called the Lost Generation, and were known to hang out and work on their craft in the neighborhood.

In addition to cult restaurants and cafés such as Les Deux Magots, Brasserie Lipp, and Café de Flore, there is a beautiful church, the Église de Saint Germain des Prés, located in the center of this bustling area of Paris. The area of Saint-Germain-des-Prés has existed since medieval times, and the church is the oldest in Paris!

Keep reading to learn more about the history of this neighborhood, and why the church is so special!

In 542, King Childebert I was at war with Spain. He noticed that the residents of the Zaragoza province were praying to Saint Vincent to protect themselves from his armies. This must have tugged on his heartstrings, as Childebert decided to lift his siege on the area. As a way of saying thank you, the bishop of Zaragoza gave Childebert the saint’s stole. When Childebert came home to Paris, he ordered for a church to be built in honor of Saint Vincent, and to house the relic.

It wasn’t until 558 (the year Childebert died), that the church was completed and dedicated by Bishop Germain, the bishop of Paris. Just next to the church, a monastery was built. Because the church was located outside the limits and the protection of Paris, it was often attacked. It was actually destroyed by vikings in the 9th century!

When the church was rebuilt in 1014, the pope at the time, Alexander III, had it dedicated to the Bishop of Paris, Saint Germain. I know thats a lot of bishops, and a lot of Germain’s to remember, but bear with me!

Although today the quartier of Saint-Germain-des-Prés is located smack dab in the middle of Paris today, in medieval times, it was actually situated beyond the city lines. At the time, religion was very important, and so in turn the area was named for the Abbey. In French, the word prés means fields, add on the Saint Germain church, and you get Saint-Germain-des-Prés. 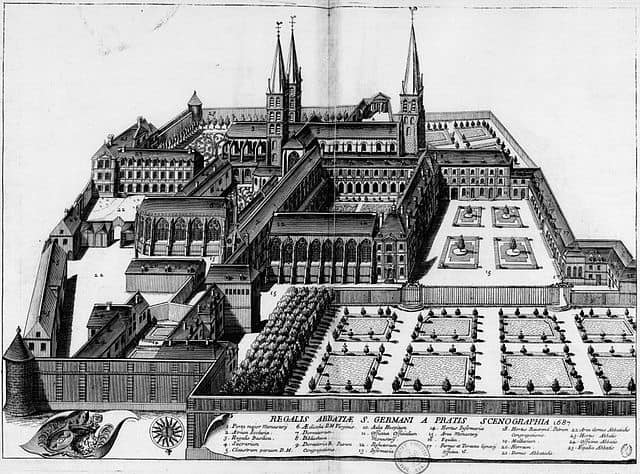 When the church was founded, it was used to guard relics (like the stole of Saint Vincent), and to bury holy people. This has since been moved to the Basilica of Saint Denis, and unfortunately many relics have been lost in the move and over the years.

The Abbey was the center for intellectual activity in Paris until the French Revolution. During this time in French history, the French people were revolting against abuse of power, and the church was a major source of that at this time. The people rose up, and took back the lands that the church owned. As a result, the Église de Saint Germain des Prés is all that remains of the complex. 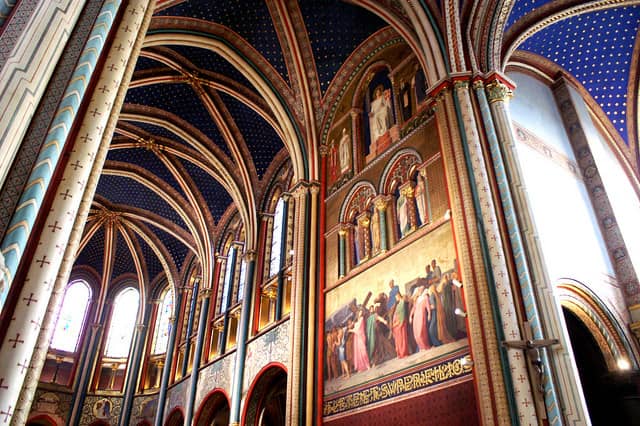 Today, feel free to enter the church to bask in the Romanesque architecture. Even though the church was destroyed and rebuilt many times, the bones of the original structure exists in all of its glory. When I entered the church for the first time, I was really taken aback by how large and magnificent it is inside! If you’re interested, there are actually guided tours that are scheduled every Tuesday and Thursday at 3pm, where you can visit the church and hear all about the history of the structure from Parisian history buffs looking to tell the story of the church!

Saint-Germain-des-Prés as a cultural hub

While you’re visiting the church, I encourage you to also explore the surrounding area. I consider this area to be a quintessential Parisian neighborhood, with its narrow streets, classic Haussmannian architecture, and bars and cafés that are famous world wide. 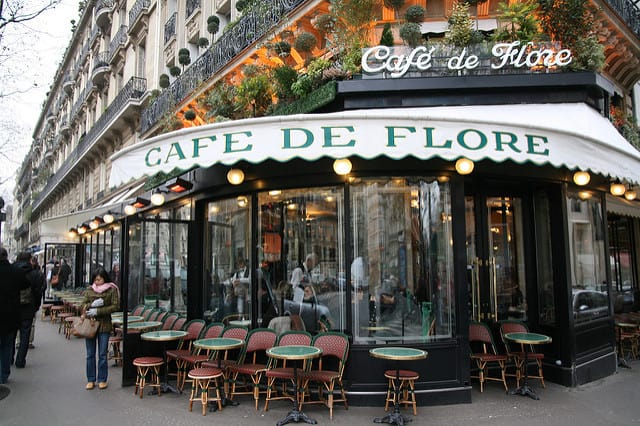 As I mentioned, Saint-Germain-des-Prés also played a very important role in the literary, philosophical and artistic world of Paris in the 19th and 20th centuries. Claude Monet and Auguste Renoir lived in small studio apartments in the neighborhood, along with Pablo Picasso. Albert Camus, Simone de Beauvoir, and Jean-Paul Sartre could be often found at the Café de Flore. Writers Honoré de Balzac and George Sand were fond of Saint-Germain-des-Prés, as well as painter Édouard Manet. 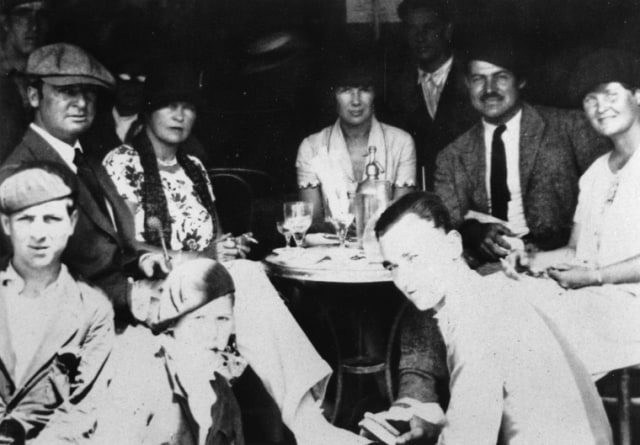 Members of the Lost Generation, including Ernest Hemingway – WikiCommons

The Lost Generation, a group of Expats fleeing their home countries to bask in the greatness and inspiration that imbibed Paris at the time called Saint-Germain-des-Prés home. Authors such as Gertrude Stein, Hemingway, Fitzgerald, T. S. Eliot and others found their voices, and produced some of the greatest literary works of the 20th century while working in cafés, restaurants, and brasseries in the area.

For those of you interested in this type of literature and art need to head to Saint-Germain-des-Prés to feel like you’re following in the footsteps of these greats! I know that personally, I love knowing that I’m walking the same streets as some of my idols. 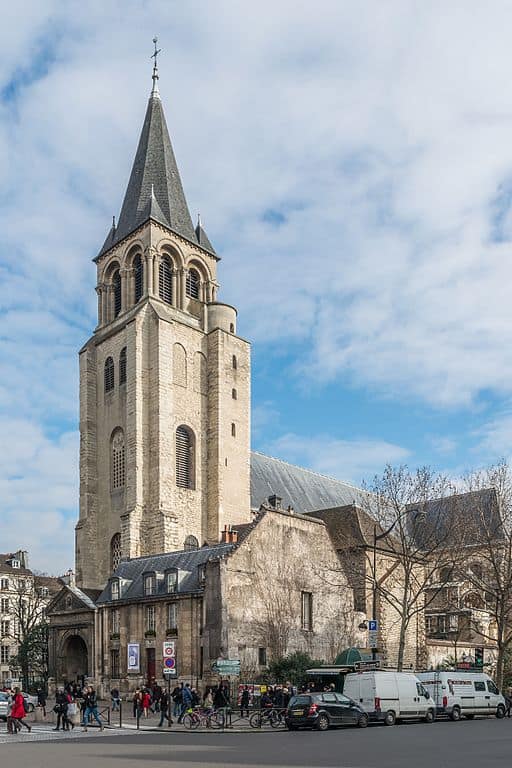 The church of Saint-Germain-des-Prés existed before the Paris we know today did. That is definitely a part of the reasons why it is indeed so special! If you want to check out the oldest church in Paris, I definitely recommend taking the time to explore.

If you’re interested in literature and art, this area is also perfect for you! History, art, culture, and literature all rolled up into one amazing Parisian neighborhood?! Sign me up!