Where to go ice skating in Paris in 2019 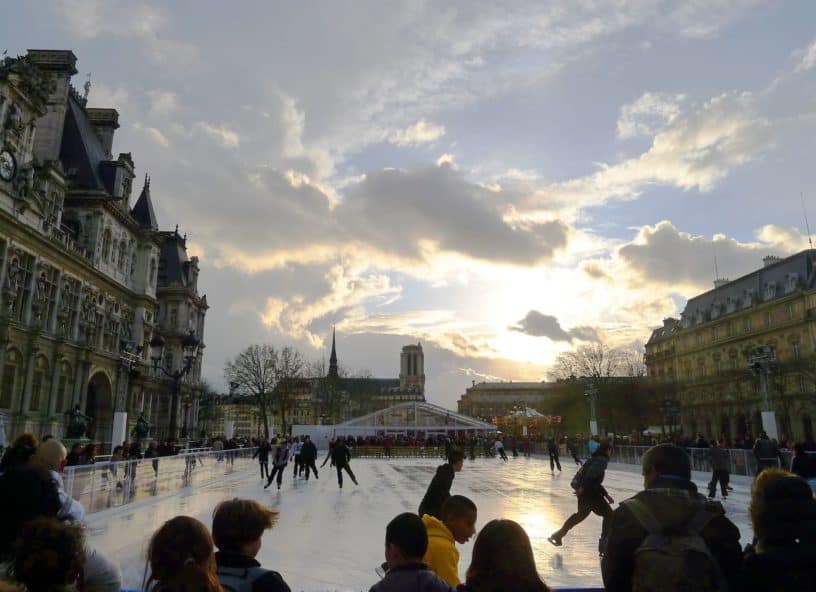 Where to go ice skating in Paris in 2019

With Christmas Day less than three months away, I’m here to tell you about one of my favorite holiday activities: ice skating. I love ice hockey, and even though ice hockey isn’t very popular in France, ice skating is definitely a thing here in Paris during the winter months. It really is the perfect winter activity, especially in the city of lights.

It’s a great time, especially when you’re desperately trying to keep your balance, falling, and laughing with family and friends. Every winter, there are a few pop up outdoor and indoor rinks around the city that are open for a few weeks around Christmas time, usually at Christmas Markets and Villages, so lace up a pair of skates, get on the ice, and take the time to explore the incredible Marchés de Noël that Paris has to offer. 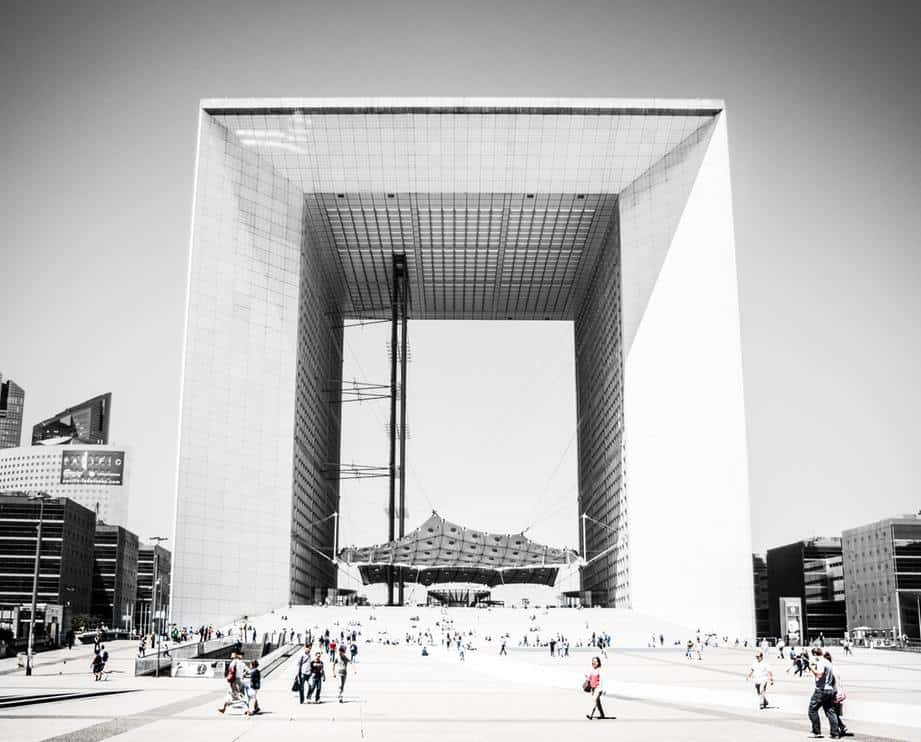 First on my list of places to go ice skating in Paris in 2019 is La Grande Arche at La Défense. To get there, take metro line 1 or the RER A to Gare de la Défense metro station. I guess La Grande Arche is technically situated just outside Paris, but it’s so close, and for the sake of giving you the best possible places to skate, I think I need to include it in this article.

I don’t know about you, but skating on a rooftop sounds pretty cool to me. From December 8th to December 21st, you can skate at this rooftop rink every Wednesday, Saturday, and Sunday.

You’ll get an unbelievable view of all of Paris, including all the significant monuments. Tickets are 12€ and skate rental is 3€, and they don’t allow you to bring your own skates. Keep in mind that this is because the rink is synthetic.

There’s also a Christmas Market there that you should be sure to check out as well. 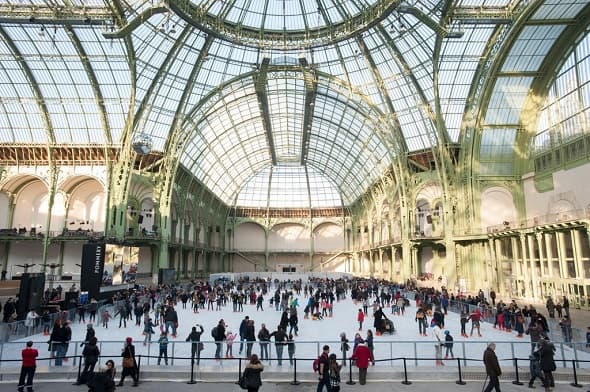 Next up, and probably the most unique place to go ice skating in Paris this year in my opinion, is the Grand Palais. Go to Invalides on metro line 8 or 13 or take the RER C. Note that this is the first of two indoor rinks that I’ll be writing about.

Le Grand Palais des Glaces is back this year from December, 13th to January, 8th. It’s the biggest skating rink in France! You can skate here from 10am to 1pm for 17€ and from 2pm to 7pm for 25€. This is definitely on the more expensive side, but it may be worth it at least once for the experience.

And at night, from 8pm to 2am, there is a light show and a DJ and the rink becomes a giant dance floor. This makes for the perfect holiday weekend night out in Paris. Like a lot of the pop up patinoires in the city, it’s only open for about three weeks, so plan accordingly and go soon! 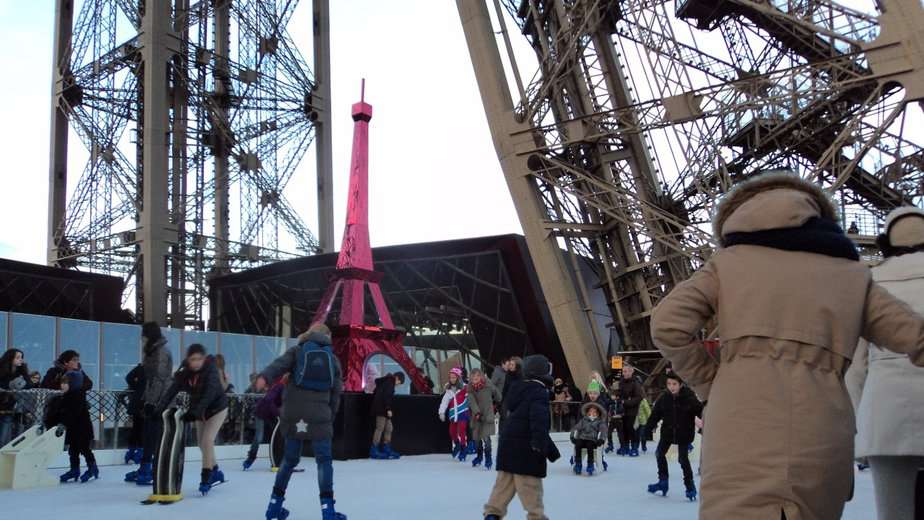 Moving on. This year, you can also skate right next to the Eiffel Tower! Every year, there is a Christmas Village at Place du Trocadéro near the Champ-de-Mars that features a skating rink for people of all ages to enjoy. Take the metro to Trocadéro on metro line 6 or 9 and you’re there. Super convenient.

This year, the village will be held from December, 22nd to January, 7th. It’s open every day from 11am to 8pm, but the rink stays open an extra hour, until 9pm. Note that it will be closed on Christmas Day, however. I’m not sure if the others are open on Christmas Day, so be careful.

Either way, take advantage of this rare, one of a kind opportunity to skate under the lights of the Eiffel Tower and enjoy the rest of this well-known Christmas Village at the same time.

Known as La Magie de Noël in 2019, a huge skating rink will be placed right in the middle of this amazing Christmas Market. Also, it’s not too long of a walk from here to the Champs-Elysées, so you can still go and get the rest of your Christmas shopping done if you need to. The Champs-Elysées around Christmas time is awesome, so I definitely recommend taking a walk there. 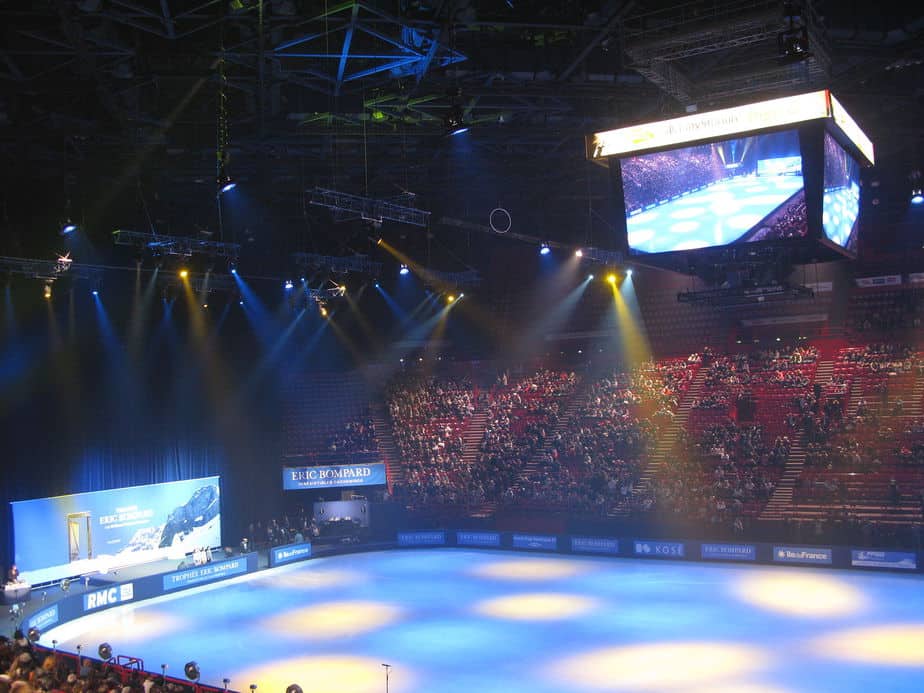 And finally, if you’re looking for a more traditional place to go ice skating in Paris this year, you can always skate on an actual ice hockey rink at the AccorHotels Arena in the twelfth arrondissement, in the Bercy neighbourhood. Hop on the metro and go to Bercy on line 6 or 14.

They have a bunch of open ice hours during school vacation and there’s a big soirée de Noël around December, 21st from 9:30pm to 12:30am. I believe it’s around 6€ to skate and another 3€ to rent skates.

So there you go, five excellent places to go ice skating in Paris during the 2019 holiday season. There are definitely more, and some places don’t set up a rink every year, so be on the lookout for other locations.

For example, there will be a Christmas Market this year at Hotel de Ville and there is sometimes a skating rink that goes along with it, but not this year to my knowledge. I’m hoping they feature it next year because this is also a great, scenic place to skate and enjoy the holidays in Paris. Enjoy!