What to do in Rome on Sundays 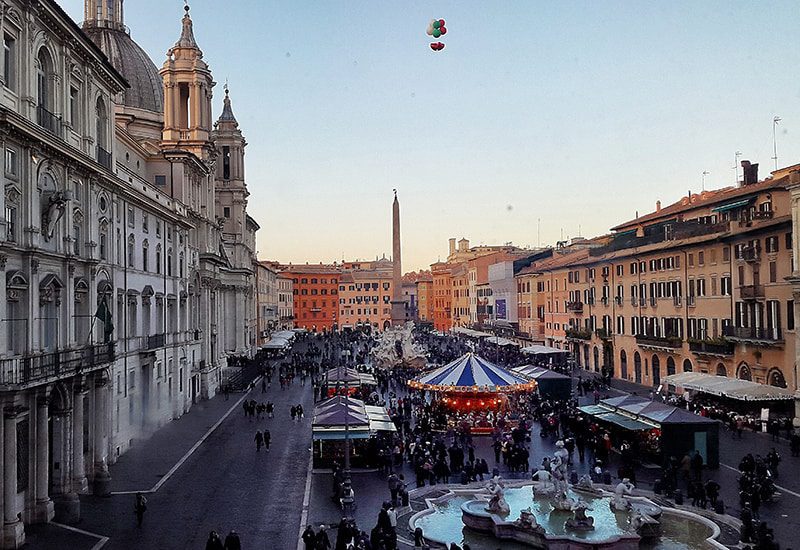 What to do in Rome on Sundays

The eternal city known as the beating heart of Italy, with its rich history and breathtaking landscapes and finest architecture, is the perfect city to be enjoyed and lived outside walking street after street among people, shops and thrift stores, interesting local museums and sightseeing great monuments every day.

But “when in Rome, do as the romans do” especially if you are travelling on a Sunday! Take your time to enjoy la dolce vita, relax and stroll around to have a memorable day. Check out the best things to do in Rome on a Sunday:

The typical Sunday morning in Rome usually starts with a walk around an iconic place, the local flea market called Porta Portese, one of the most famous markets in Italy.
Well-known for its multiethnicity, with thousands of stands where you can find just anything, different kind of objects and goods, second hand clothing, antiques and vintage designer products and much more.
This best known flea market is located in the Trastevere district; the marketplace stretches from the very old Porta Portese gate in Piazza di Porta Portese to Via I. 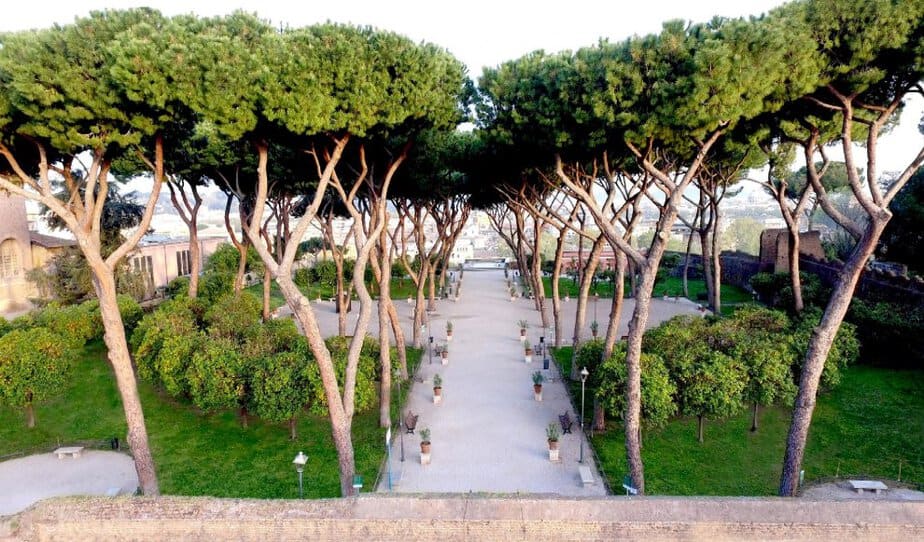 This charming park surrounded by orange trees is the most magical and suggestive place in Rome where tourists love to stroll and stop to admire the landscape. The garden was built in 1932 on the Aventine Hill near the Basilica of Santa Sabina and extends for about 8.000 square meters and is surrounded by beautiful orange trees.

From this evocative and panoramic terrace is possible to admire Rome in all its beauty with the River Tiber, the Church of Santa Maria in Cosmedin, the Temples of the Foro Boario and St. Peter’s dome.

Just outside from the garden, there is a little surprise for those who want to enjoy another picturesque view and take a beautiful photograph from the keyhole of the door of the Priory of the Knights of Malta.

This archaeological structure visible from the Belvedere “Romolo e Remo”, testifies the ancient history of Rome. The Circus Maximus was used to perform the most popular activities loved by the ancient Romans, such as chariot races and gladiator fights.

These activities allowed Roman citizens to enjoy themselves and have fun. The structures that can still be seen today dates back to the emperor Trajan. Starting from the 1930s the archaeological excavation works have brought to light most of the structures present today and the remains of the Arch of Tito.

Visitors will have access to the archaeological area every day from Tuesday to Sunday from 09.00 am to 19.00 pm.

The Legend: The Mouth of Truth 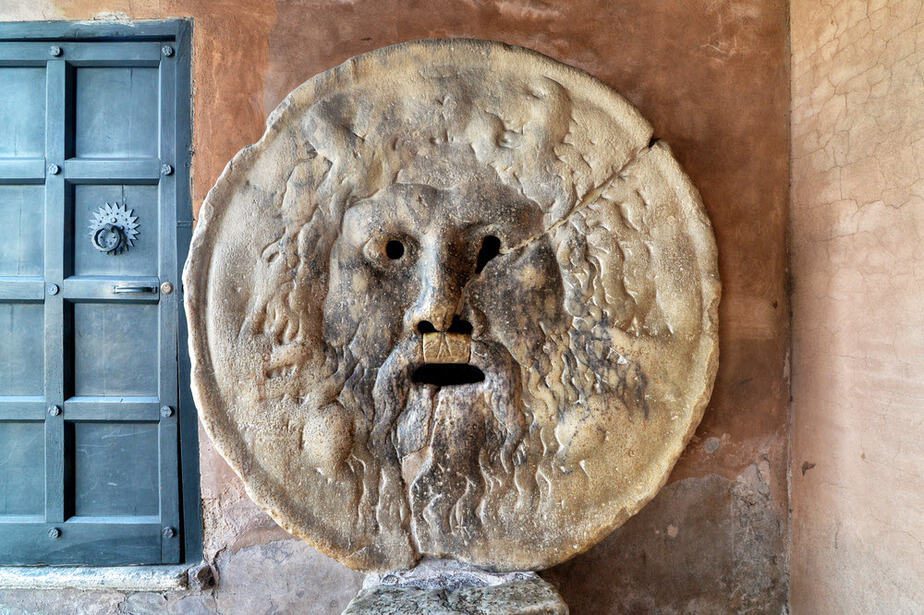 Walking from the Circus Maximus, in the square called Piazza della bocca della verità, you will find the Mouth of Truth, the worldwide famous marble mask.

Located under the Portico of Santa Maria in Cosmedin’s Church, this sculpture large 1, 75 meters and with a weight of about 1300kg it can be dated around the First Century and represents the God of the Sea with a bearded face, holes for the eyes, nose and mouth.

According to the legend people believed that the mouth of the marble face would close if anyone put his hand in it and told a lie. If you are brave enough, give it a try!

Some Magic: The Alchemical Door 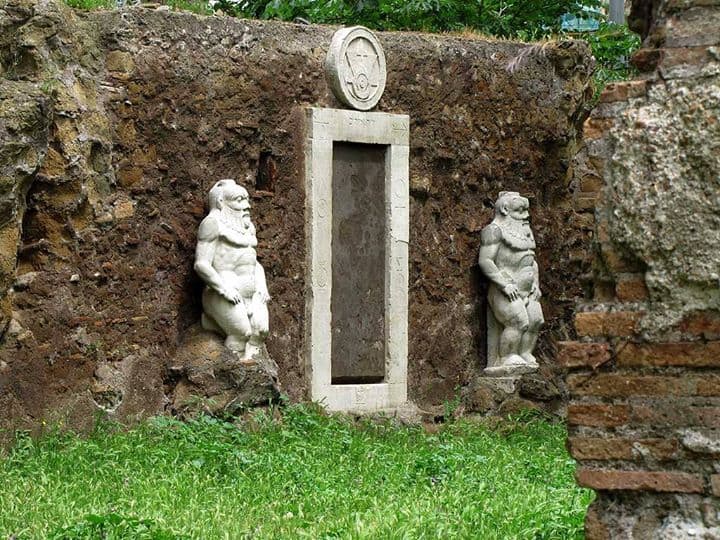 Located in Piazza Vittorio Emanuele II near the underground Vittorio Emanuele (Line A) there is this magic door also called “the alchemical door” built in the second half of the seventeenth century by the Marquis of Pietraforte.

The legend tells the story of a man who had visited the Marquis, leaving his notes full of symbols and enigmas and phrases in Latin that the Marquis had engraved on five doors, with the hope that one day they could be deciphered. Here you can admire the only remaining door of the building known as Villa Palombara.

After a day walking between art and beauties of Rome, a few steps from Piazza di Spagna along Via della Croce you can find Pompi, “the reign of tiramisù”. It’s a place where to relax and taste some delicious food.

This family business was born in 1960, and it still produces hand-made ice creams and desserts.
During your roman holidays you must try the mojito tiramisù!

The Heart of Rome: The Pantheon 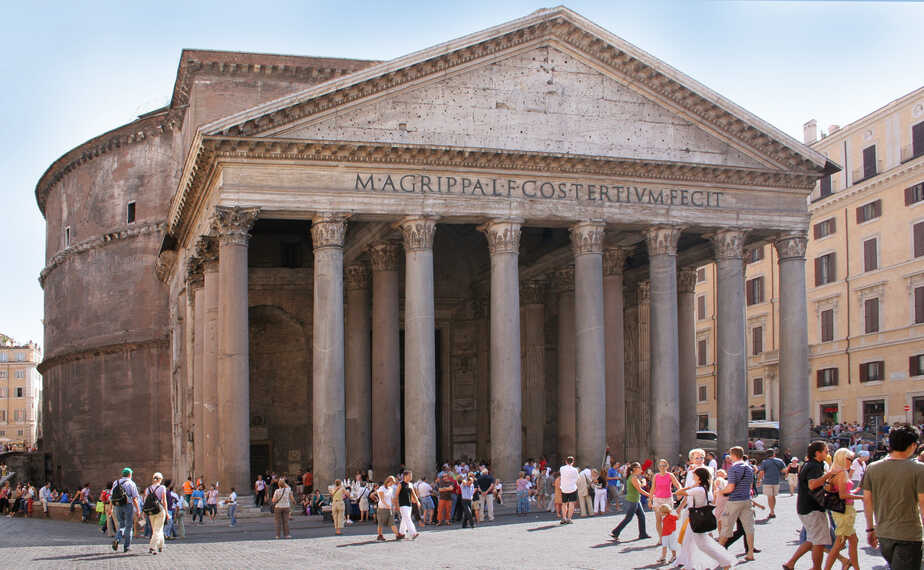 Walking throughout the narrow streets of Rome you will arrive in the historic centre of the city, to see one of the most spectacular sights. The Pantheon is a complete ancient building dating back to the 125 A.D. initially built has a temple for the deities and then rebuilt twice after two great fires.

The building is composed of a circular structure joined to a portico in Corinthian columns.
The dome above has at its apex a circular opening called “oculus”, which allows the illumination of the internal environment. In this way, thanks to the opening, inside the Pantheon there are some beautiful light effects of light and shadows.

Converted in the 7th century into a Minor Basilica, it was enriched with frescoes and today preserves the tombs of the first king of Italy and Queen Margherita.

The Quiet and the Art: Via Margutta 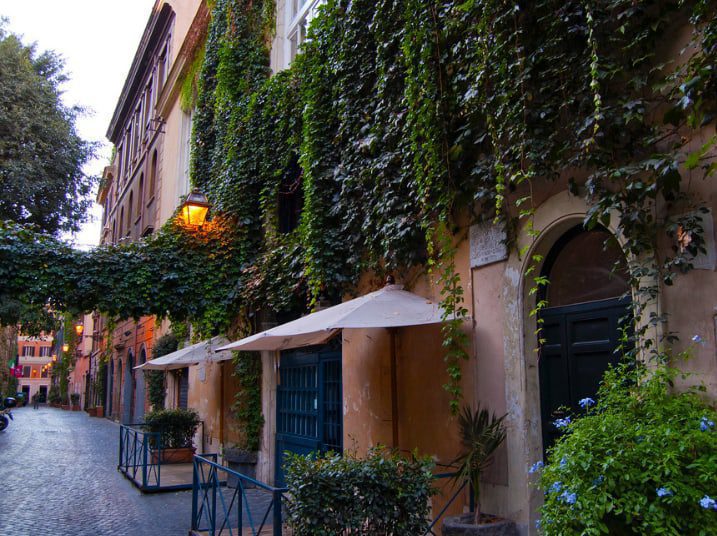 “Via Margutta”, know as the most romantic street in the world, image sourced from Spezio.it

Long ago, Via Margutta was the road along which carriages and carts were left, where there were warehouses and stables for horses. It then became a street where many artists, especially foreigners, found themselves with their shops.

Artists, sculptors and antique dealers created a quiet path in the middle of the roman chaos. Along the way it is possible to admire the Fountain of the Arts, a fountain made up of artists ‘tools or easels, palettes, brushes and sculptors’ compasses.

In the 50s, Via Margutta became the home of Federico Fellini. It was then chosen as location for the film “Roman Holidays” with Audrey Hepburn and Gregory Peck. 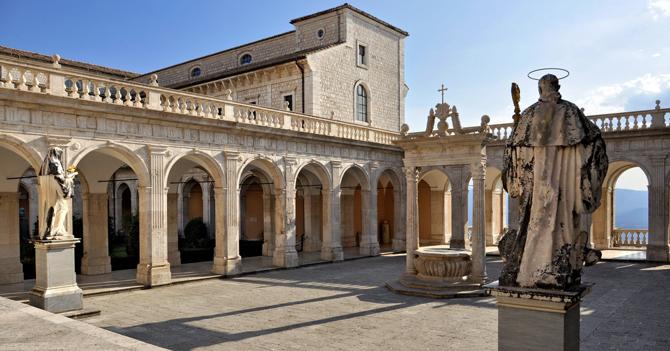 The cloister of the Bramante is a Renaissance architectural structure in Rome designed by Donato Bramante and commissioned in 1500. The building is characterized by an elegant and classic style. Nowadays inside the structure there are permanent and temporary exhibitions inside the museum space.

The museum is open every day from Monday to Sunday (10.00 am to 20.00 pm) but the ticket office closes an hour before the closing time.

Piazza Navona with its Bernini Baroque fountains (the Fountain of the Four Rivers in the centre of the square, which represents the rivers Ganges, the Danube, the Nile and the Rio della Plata, therefore the four corners of the Earth) was once known has “Circus Agonalis”.

Originally built has a Stadium under the Emperor Domitian and used has arena where different athletic activities took place. The square was concave and it was common in the Ancient Rome to block the closures of the fountains and the water came out so as to flood the entire square.

After the imperial era the Stadium was no longer used and became a meeting place and a market area. 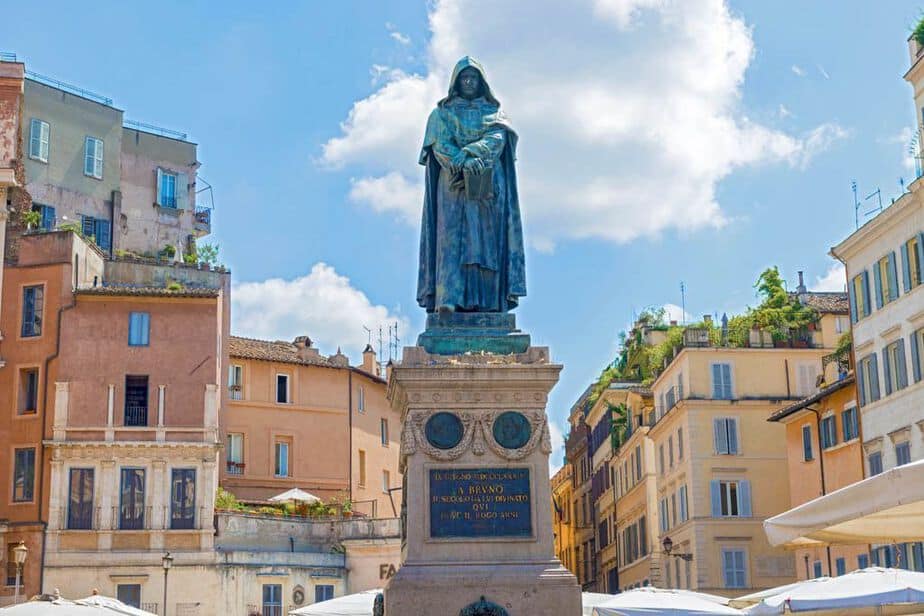 Campo de’ fiori is a beautiful square with a very old history, is a place where you can relax and take a break from the long sightseeing tour around Rome!

Is called Campo de’ fiori (literally translated as “field of flowers”) because once it was a green area full of flowers and vegetable gardens but with a redevelopment project by Pope Callistus II, the area was paved and several buildings were built. The square thus became a place of passage and connection with the other important streets near the neighbourhood.

Campo de’ fiori then became one of the main squares in which to perform public executions and among these,that of Giordano Bruno, condemned on 17 February 1600. The philosopher was considered heretic, and in this square was burned alive.

Shopping Around: Via del Corso 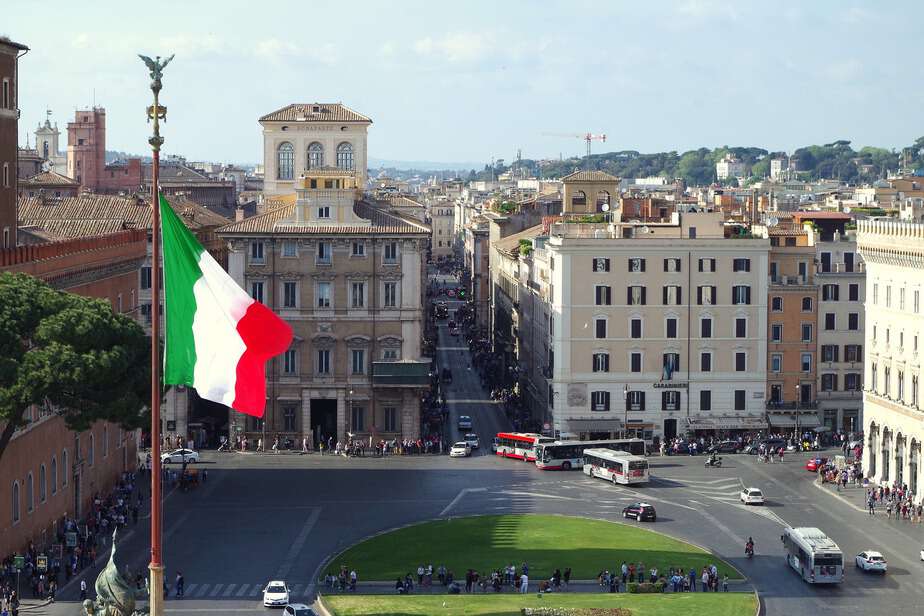 Rome is not only the capital city of history and culture!
Via Del Corso (also called “the street of the shopping”) is one of the most famous streets of the city, and is the best place to go shopping and stroll throughout Rome. In fact there is a high concentration of shops all along the street that connects Piazza del Popolo to Piazza Venezia.

Via del Corso together with Via del Babuino and Via Ripetta and all the small streets that cross in between, form a section of Rome that is called “the Trident”. The shopping heart of the city, the most exclusive area in all Rome, where the entire top brands have stores. Not to be missed!

All you have to do is take the underground (line A) and stop at “Spagna” near Piazza di Spagna or at the “Flaminio” stop near Piazza del Popolo.