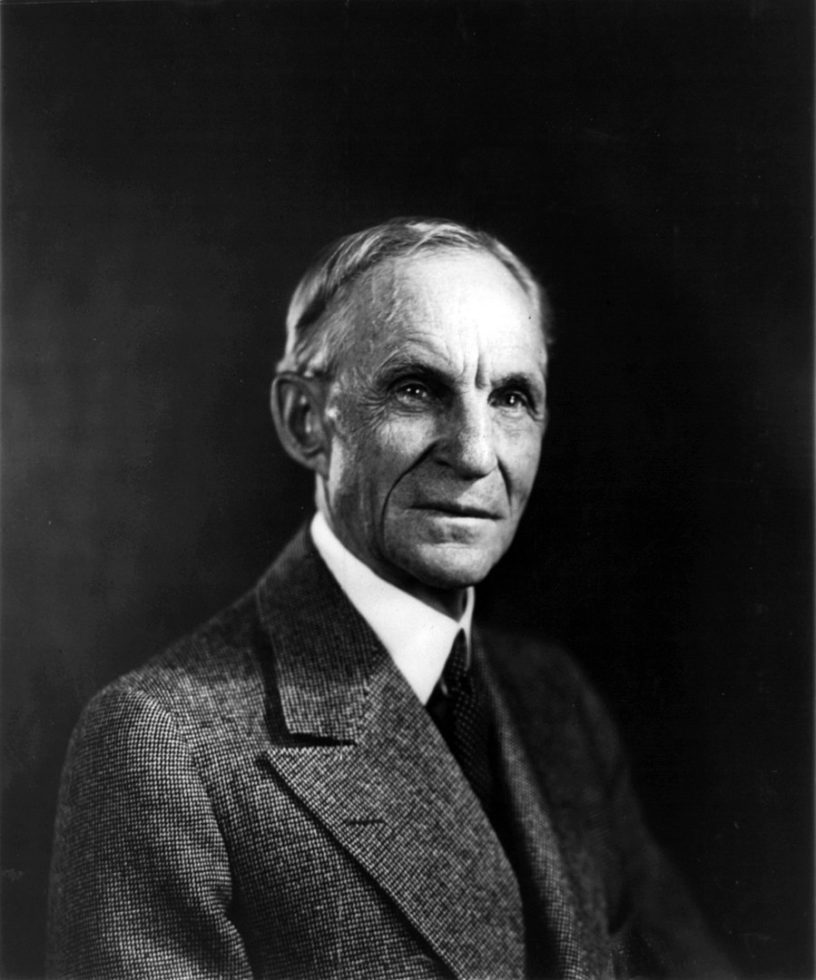 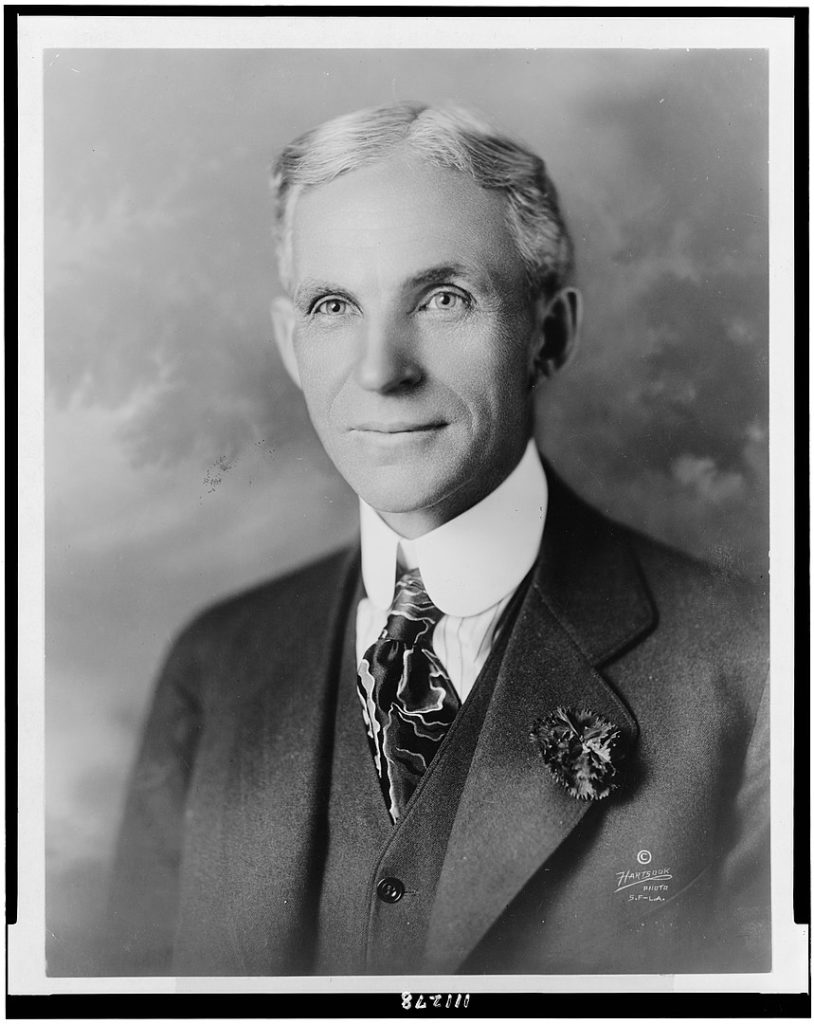 Henry Ford was an American industrialist, business mogul founder and chief developer of the Ford Motor Company. He was born on July 30, 1863. He was the eldest of six children. His father was a native of County Cork, Ireland, who came to America in 1847 and settled on a farm in Wayne County.

He was interested in mechanics from an early age. He constructed his first steam engine at age 15. He acquired an apprenticeship as a mechanist and later got employed as an engineer at the Edison Illuminating Company of Detroit. He became chief engineer on November 6, 1893.

He married Clara Jane Bryant of Greenfield, Michigan. Clara lived to the age of 84 and died on September 29, 1950. They had one child, son Edsel Bryant Ford was born on November 6, 1893.

1. He transformed agricultural economics in the United States 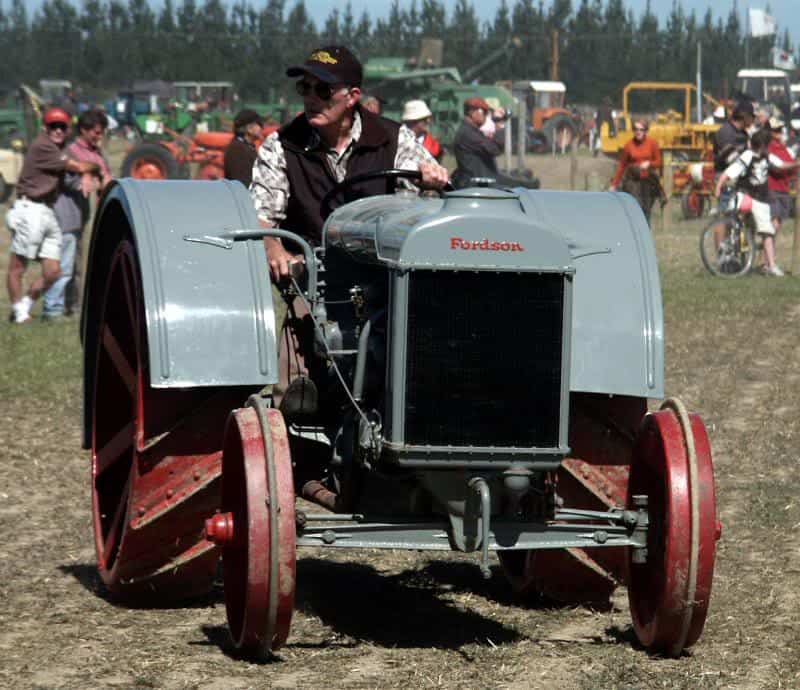 In the early 19th century, agriculture, food and all other related industries contributed greatly to America’s Gross Domestic Product.

Ford’s dream was to make farm life easier. He had grown up on a farm but he hated farm work. Farm work was physically draining and time-consuming. He thought mechanizing farming by using tractors would make it less tiring.

The Fordson tractor, manufactured by Henry Ford and Son, Inc., in 1917-1918, was the first lightweight, a mass-produced tractor that was affordable to the average farmer. Through this and other efforts, Henry Ford sought to relieve farmers of the burden of heavy labour.

2. Ford’s first car to build, Model A, was done with his son 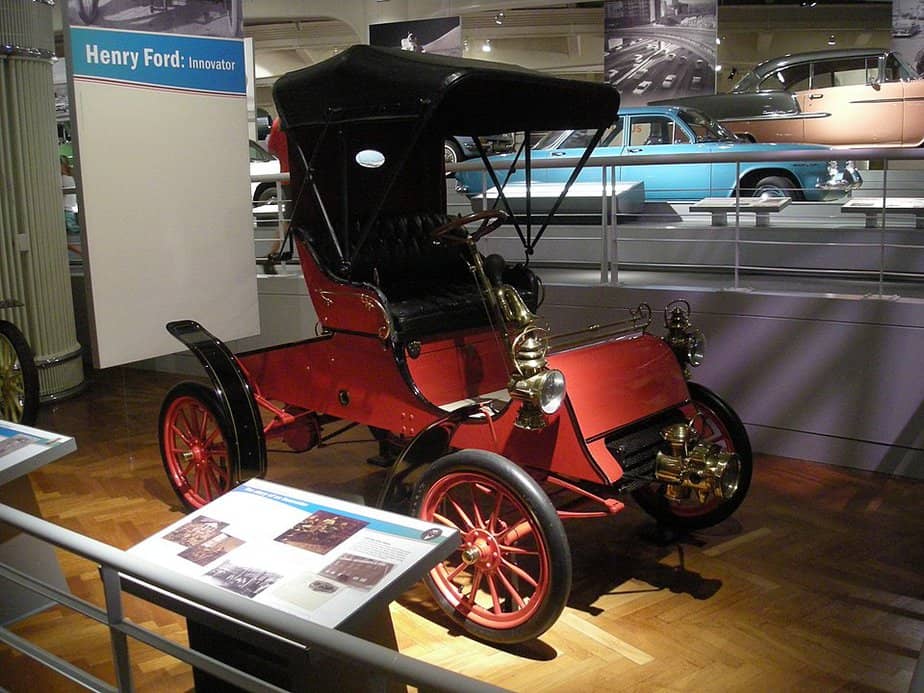 A 1903 Ford Model A . Photo by Michael Barera- Wikimedia

The original Model A was the first car he built.

It was advertised as reliable but it had problems such as overheating. He used up almost of all the Henry Ford and Son company’s savings but all in all, it was successful, it did generate profit. 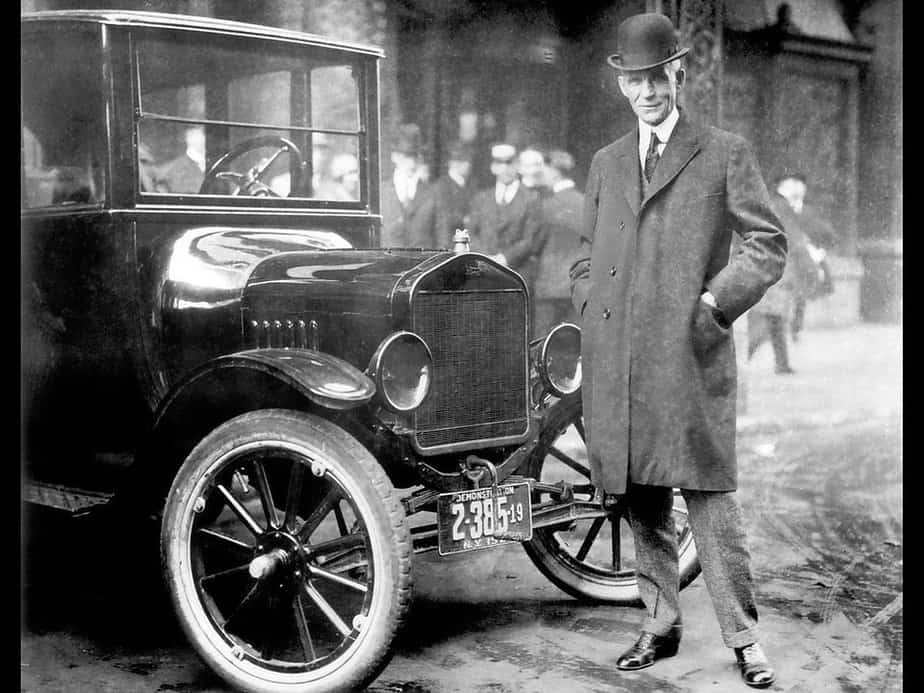 Model T, launched on October 1st 1908, put him on the map. Most drivers in America learnt to drive using the Model T. Half of the cars in the country were Model Ts.

The steering wheel was on the left which all other automobile companies copied. It was easy to drive, easy and cheap to repair and affordable.

In 1918, Ford turned the presidency to his son.  He remained a firm authority in the decisions of the Ford Motor Company. There were other stockholders in the company.

Ford went on and formed another company making sure to tag along with his best employees. This stunt duped the other stockholders to sell their stock to Ford. This gave his family sole ownership of the company.

4. He bought an airline company 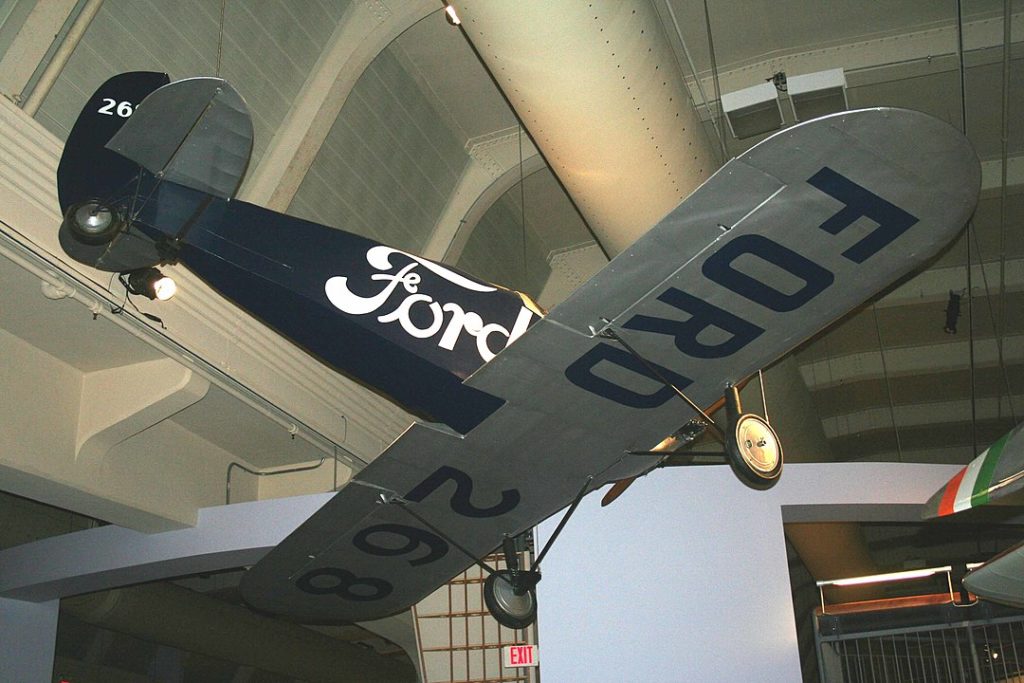 After WW1, planes generated interest in many. Ford was not left behind. He had always vowed to fly. He invested in Stout Model Airplane Company, a company that had perfected an all air metal transport in 1923.

His ambitions knew no bounds. Several attempts were made that led him to mass-producing bombers in WW2.

His son who had also devoted his life to the airline died in 1943 not having seen the end of the war. Ford however lived a couple more years and witnessed proudly, his work in full force.

When he first visited Bryan County, Georgia, in the late 1920s, he noticed that the once flourishing county had been left behind after the depression.

He decided to invest. He bought the land. He built schools, hospitals and even churches.

In the end, he did improve the livelihood of the people in the area but ended up controlling how they dressed, worshipped and what they learned in schools.

When he died, the county that had flourished in his lifetime slowly declined as it had become so dependent on his leadership. All the land ended up being sold. 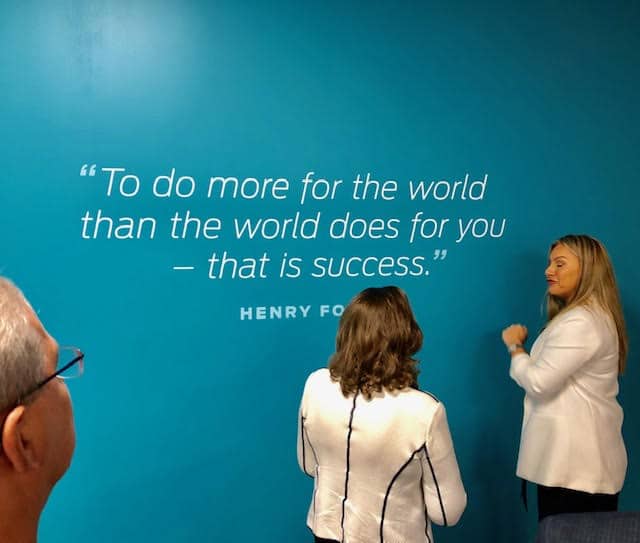 Ford always had the urge to improve and better everything around him. Another driving force is that he wanted his employees to afford his cars. He believed that paying workers fair wages would make them good workers and citizens.

This notion is what led him to add to his employees’ wages for more than twice what they earned. The wages were equal for both the white and black employees. This in turn did boost the sales since his employees bought cars.

7. He did not discriminate when hiring 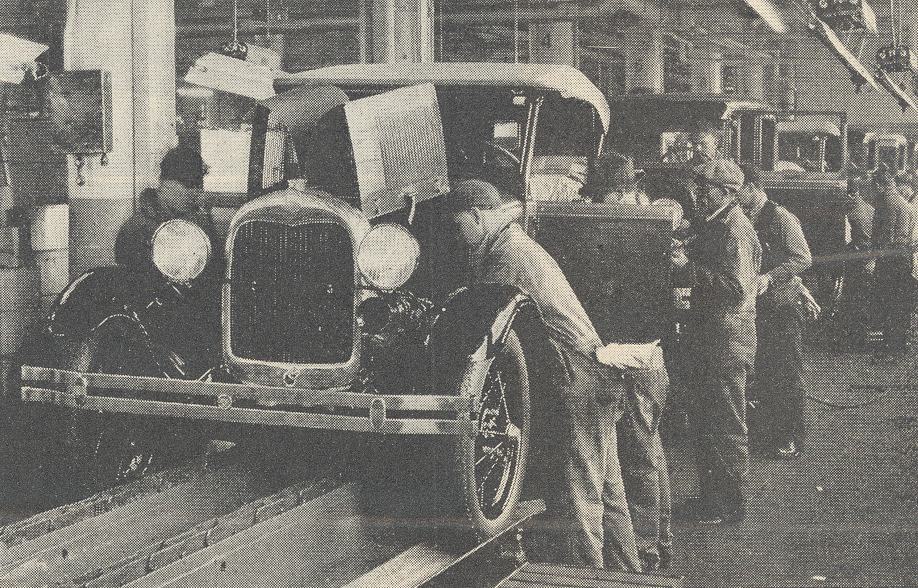 In his time, discrimination was rampant. Persons were discriminated against due to race, religion and even physical disabilities.

To Ford that was not an issue. Ford’s company was the one with most black employees due to his relationship with black ministers. He even paid the blacks the same amount as whites. This was not common in institutions at the time.

He did not see an issue with hiring disabled persons either. As long as the work was completed satisfactory, he did not mind hiring them. By the 1920s almost 20% of his employees were disabled. This also included hurt veterans.

8. He did not drink alcohol

Ford did not advocate for alcohol.

Ford’s obsession with innovation acquired him the nickname ‘Crazy Henry’ at a young age.

After he married Clara in 1888, he got a job at the Edison Illuminating Company in 1891. Every night, he experimented in the garage behind his house.

The neighbours called him “Crazy Henry” for his obsession, but in 1896 he rolled out his first self-propelled vehicle: the Ford Quadricycle.

With encouragement from Thomas Edison, Ford kept experimenting—and began to believe he could create his own automobile company.

10. Ford was a high school dropout 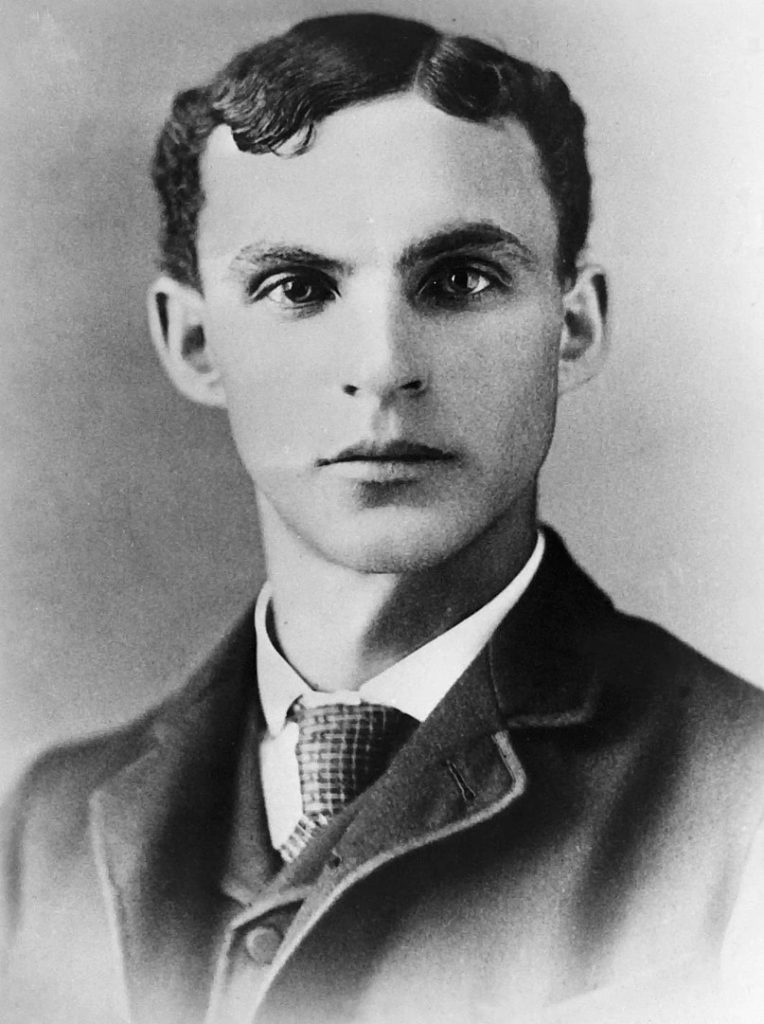 Ford did not go to high school. He left school after finishing eighth grade. He was 16 years at the time he left his farm. He went ahead to acquire an apprenticeship.

Even after leaving school, he was named Businessman of the Century by Fortune magazine in 1999.

Ford tried to take up the company’s presidency after his son died of cancer but a series of strokes and illnesses curtailed him.

He finally kicked the bucket on April 7, 1947, of a cerebral haemorrhage aged 83 beside his wife and household staff.

Ford Motor Company leadership was taken up by his grandson, Henry Ford II as he had earlier recommended.