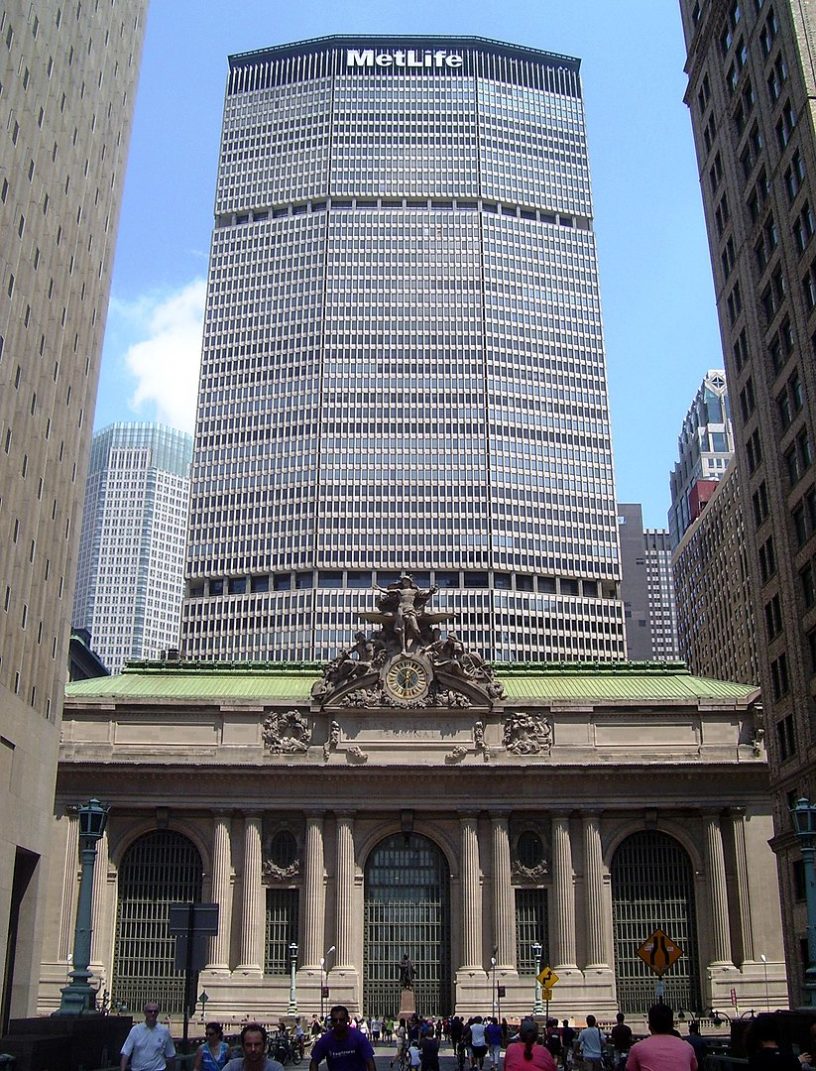 Grand Central Terminal, is a railway terminal in New York City, situated at 42nd Street and Park Avenue in Midtown Manhattan. Being the southern terminus of the Metro-North Railroad’s Harlem, Hudson, and New Haven Lines, it serves the northern parts of the New York metropolitan area.

Grand Central Terminal covers an area of 48 acres, with 44 underground platforms, the biggest number among railway stations in the world. It was established by New York Central Railroad in 1903 and officially opened on February 2nd, 1913.

It was a result of the failure of the original 1871 Grand Central Depot, to meet the demands of the 20th-century city. It is the second busiest railway station in North America. Enjoy the below top 10 astonishing facts about the Grand Central Terminal. 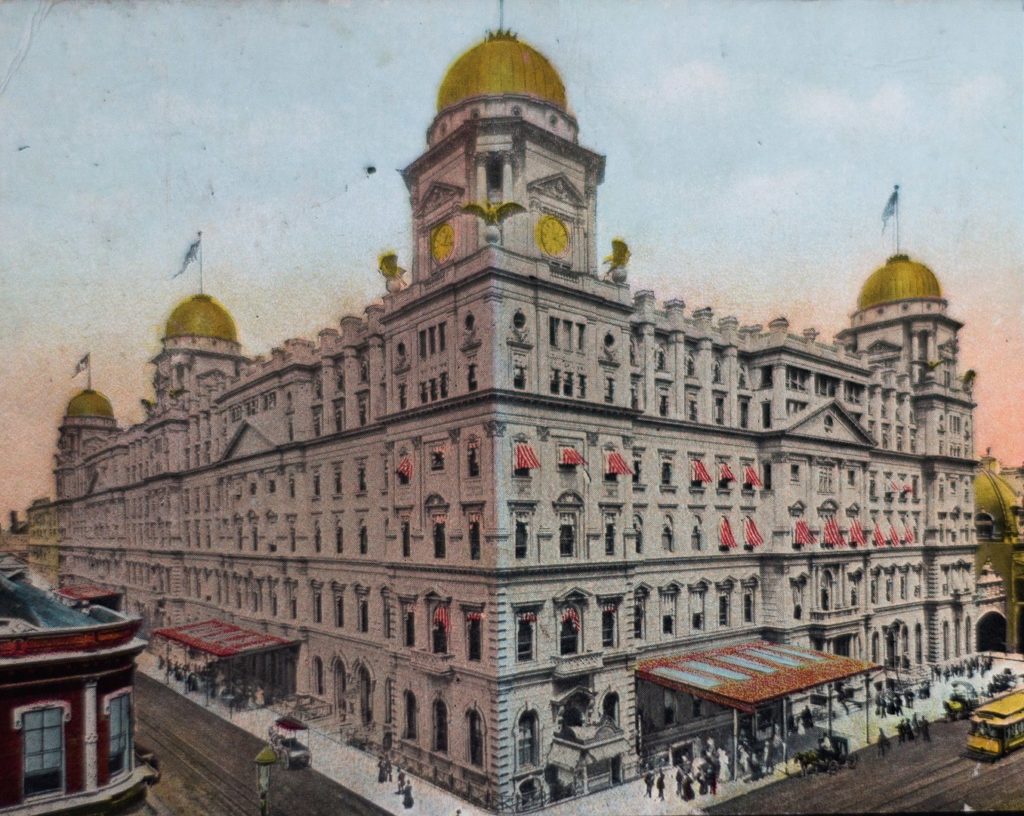 “You have undertaken to cheat me,” Cornelius Vanderbilt wrote to a former associate in 1853. “I won’t sue you…. I’ll ruin you.” An American Tycoon in the shipbuilding business had seen an opportunity in the inefficient & inexpert railroad industry.

Vanderbilt, nicknamed “Commadore” switched from ship to railroad industry, and in the 1860s, he bought Hudson, Harlem, and New Haven railroads. He merged them as one railroad and shared a new transit hub, the 42nd street location. He built the original Grand Central Depot which opened in 1871.

The station was renovated and renamed “Grand Central Station” three decades later. Due to technological changes and the speedy rise of traffic, the station became obsolete. This led to the demolition, redesigning, and reconstruction of the “Grand Central Terminal” at the site of its two predecessor stations.

Reed & Stem won, but Railroad was not sure if Reed’s innovative ideas were enough to make the station majestic. It hired another architect, warren & Wetmore which added an idea of monumental fascia. The two collaborated as ‘Associated architects’ and brought the best out of their combined ideas.

The floors were of Tennessee marble, wall trim of Botticino marble, and the walls of artificial Caen stone. Like those in the Cathedral of St. John the Divine, the Oyster Bar’s domed ceilings are decorated with a herringbone pattern of Guastavino tiles.

Outside is decorated with magnificent sculptures of Mercury, Hercules, and Minerva on top of the 42nd Street frontage. Grand Central’s distinguishing architecture & décor earned it several landmark designations, including National Historic Landmark on December 8th, 1976.

3. Grand Central Terminal, a pioneer of the invention of new technology

Grand Central Terminal conquered the intimidating challenge of building a massive, durable, and efficient railway station. With the little space of 48 acres, the engineers constructed a large underground erection. Four tracks in the park avenue tunnel, a 123-track train shed to support heavy locomotives and the buildings’ weight above. The concealing of train tracks underground paved the way for the buildings’ construction above them.

Engineers had to build models of indoor walkway ramps at various slopes, and according to The New York Tribune, studied “the gait and gasping limit of lean men…fat men…women with babies…and all other types of travelers” to determine the ideal slope. Grand Central Terminal has five centrally located signal towers that communicate closely with each other to route trains through a vast labyrinth of tracks.

Underground is a centralized hot water heating system, with pipes serving the station and the environs. Engineers William Wilgus and Frank Sprague designed a trailblazing third rail makes. Trains connected with the basement of the power rail, whose top and sides were covered in wood to protect workers from being electrocuted. 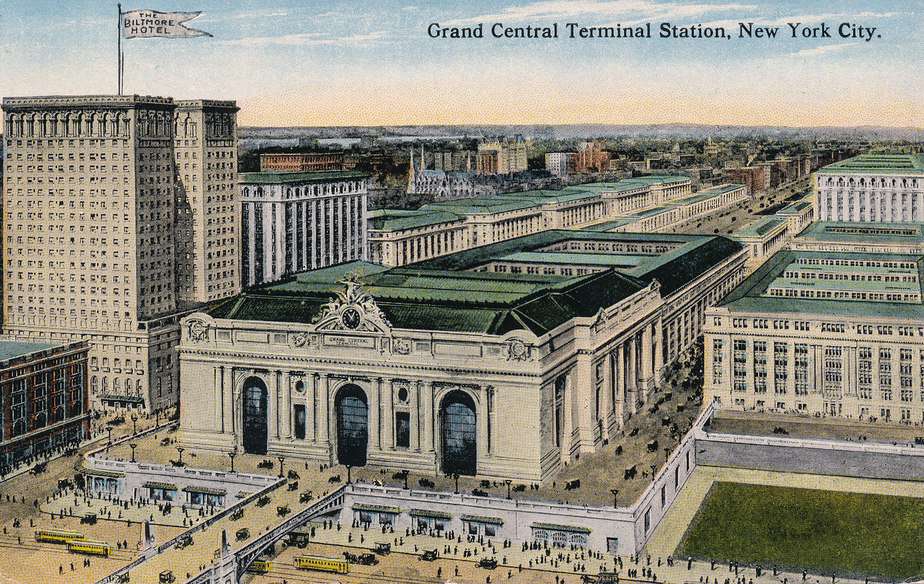 The train tracks concealed underground created a unique opportunity to lease out the ground above the tracks to developers.  The New York Central initiated the idea of selling “unreal” estate, the first-ever reference to “air rights”.

This novelty had a weighty impact that made Grand central Terminal the core of an extraordinary urban campus, a rambling complex of shops, office turrets, hotels, and posh apartments built above the tracks and tunnels.

Effective commuter services in the heart of a packed business district stimulated suburb growth by connecting extensive neighboring communities to mid-town. This led to more developments.

Every afternoon, the red carpet was unrolled to greet commuters boarding the splendid modern rail train heading to Chicago. The red Caps in the terminal carried the passengers’ luggage; Racketing cars aboard the train served lavish meals.

“You can sleep”, boasted ads for the New York Centrals water level route. The trains to Chicago and Midwest ran along the Hudson River and Lake Michigan route, providing a smooth and soothing journey.

The hall is lit by Beaux-Arts. and was formerly the waiting room for the intercity travelers. It. It is at the south of the terminal between the Park Avenue entrance to its south. The hall was renamed ‘Vanderbilt Hall’, after the family that built and owed it.

The west half of the hall was the Great Northern Food Hall, a swank Nordic-themed food court with five pavilions. Vanderbilt Hall also has hosted the annual tournament of champions squash championship 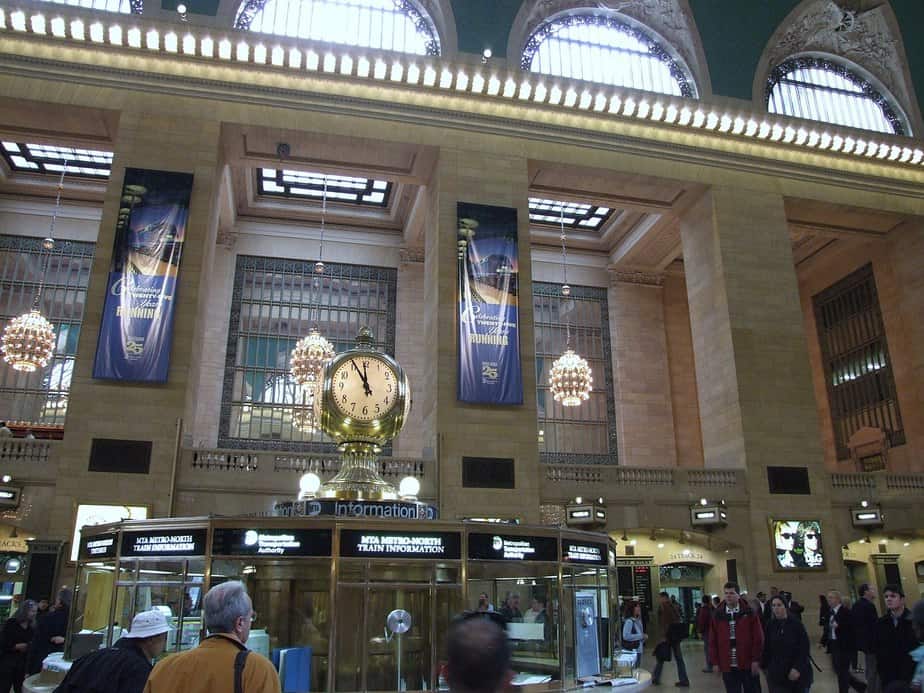 The main concourse is on the upper platform level, in the center of the building. It has an information booth at its center, that provides train schedules and other information to the public. It is topped with a four-sided brass clock, dubbed “Big Ben”, one of the Terminal’s most recognizable icons. It is usually a busy crowdy and a meeting place. The departure boards are located at its south end.

The Dining Concourse, Formerly Suburban Concourse, is below the Main Concourse and connected to it by numerous stairs, ramps, and escalators. It provides access to the lower-level tracks.

It has a small square-framed clock fixed in the ceiling near Tracks 108 and 109, a bureau where incoming items are sorted according to function and date, and lounge areas surrounded by restaurants like Grand Central Oyster Bar & Restaurant. 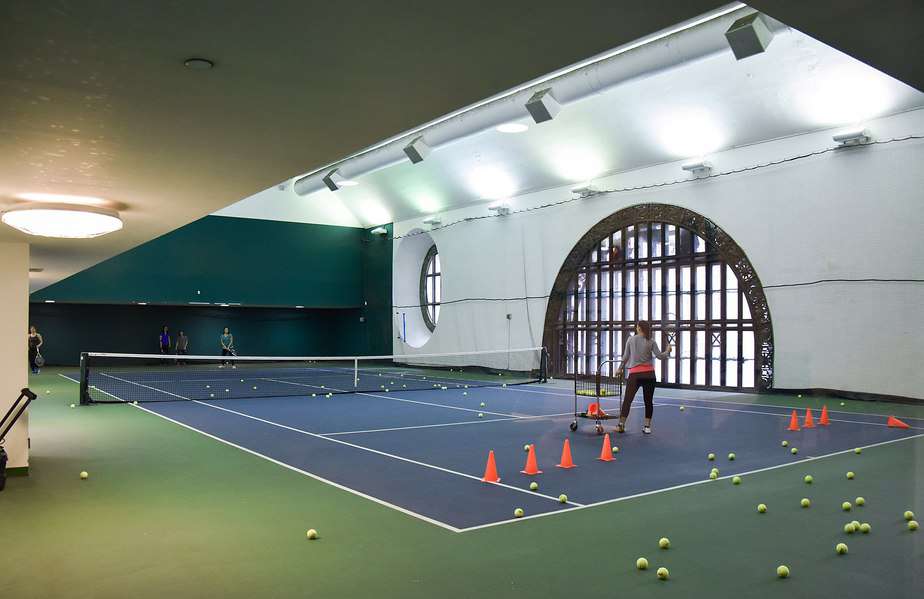 When “Annex”, the CBS television offices left in 1966, the space was occupied by Vanderbilt Athletic Club, a sports club founded by Geza A. Gazdag, an athlete and Olympic coach.

Its Tennis courts were once deemed the most expensive place to play the game. Other club amenities are; a nylon ski slope, a health club & sauna, and spaces for golf, fencing, gymnastics, and ballet practice. lease dispute led to Gazdag’s business eviction. A tycoon, Donald Trump bought the real estate. 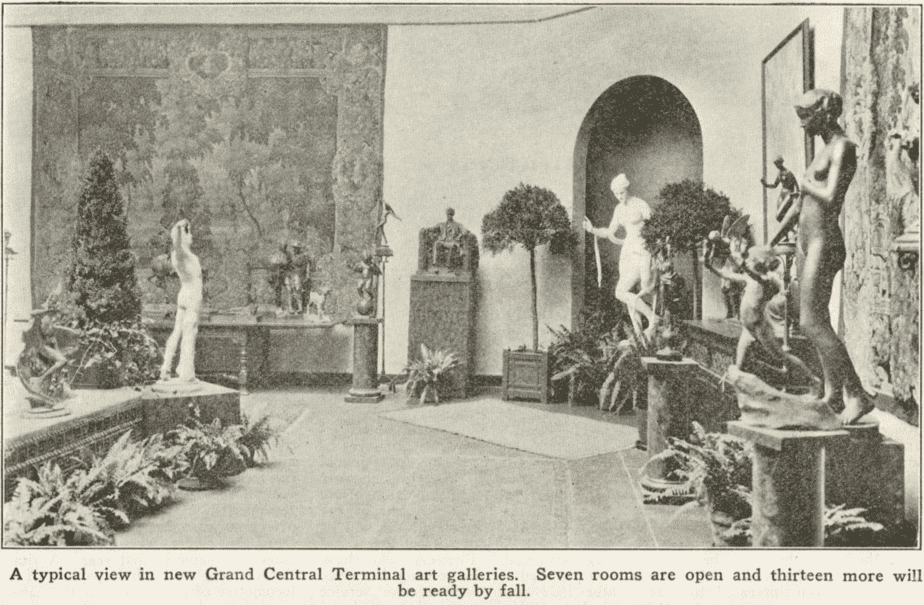 Grand Central School of Art is on the seventh floor of Grand Central, making it a home to the Grand Central Art Galleries from 1922 to 1958. It hosted several creative concerts including Phillippe petit’s 1987 high wire walk and exhibitions.

Art fixings in Grand central range from permanent works of public arts like the celestials ceiling in the main course, the glory of commerce work, the statue of Cornelius Vanderbilt in front of the building’s south façade, and the two cast-iron eagles’ statue embellishing the terminal’s façade, to temporary works, exhibitions, and events are frequently mounted in Vanderbilt Hall. 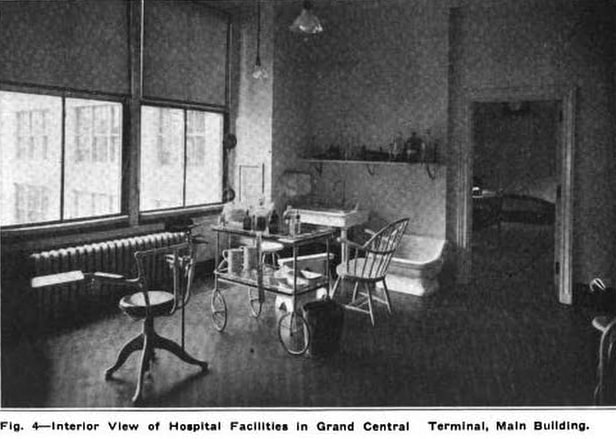 Grand Central Emergency Hospital was created in 1911, to treat the injured; both the employees and the passengers. It had four rooms; A as a waiting room, B as an operation room, C as a private office, And D as a resting room for patients. The hospital treated minor to moderate ailments.

Libraries include; Williamson Library, a meeting place and a research center comprising enormous books, newspapers, films, and photographs about railroads, artifacts, and part of the 20th century limited red carpet. The Frank Julian Sprague Memorial Library belonging to the Electric Railroaders Association has about half a million publications and slides based on electric rail and tram lines.

The Grand Central theatre/Terminal newsreel theatre which showed short films, cartoons, and Newsreel was altered for retail space in 1979.