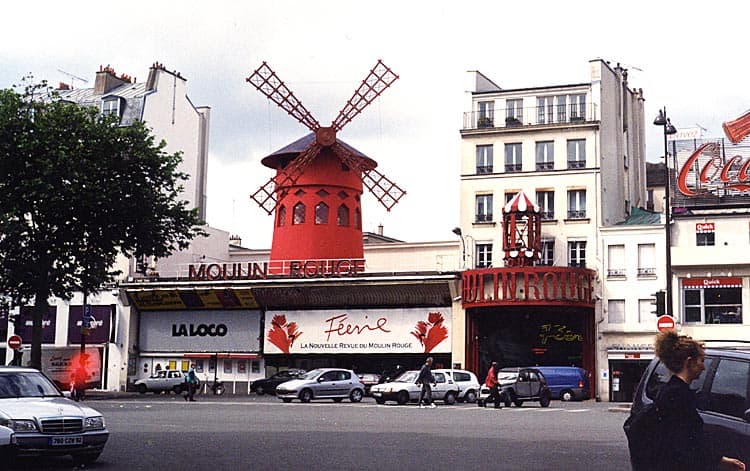 Five most romantic places to stay in Rome 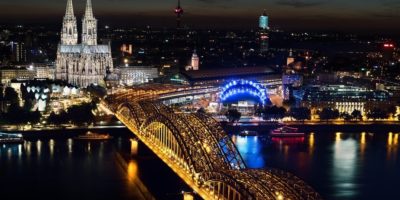 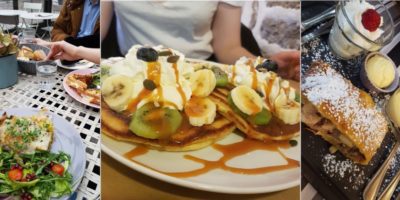 What To Do on Sundays in Paris

The Moulin Rouge is such an obvious and expected landmark in Paris that we often forget to even discuss the reasons why one should visit it anymore. It’s simply just part of the itinerary; rarely backed by motive or educational content.

At face value, the Moulin Rouge appears to be none other than a sleazy old performance hall that is holding onto the years gone by. It took me actually sitting down to divulge into the history of this iconic place to really appreciate its important role in the city of Paris. 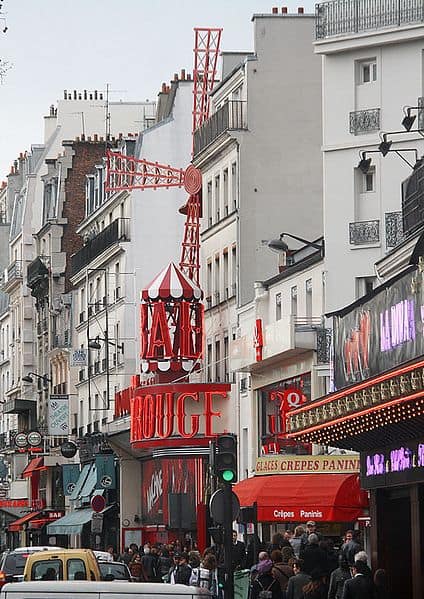 If booze, cigars and smoothie jazz aren’t enough to get you through the doors, here are ten more reasons to visit la Moulin Rouge in Paris.

1. It was the First Building in Paris to use Electricity for Aesthetics

In 1881 the Paris Palace of Industry held an exhibition to showcase all the new electrical innovations, including dynamo, the light bulb and the electric tram. This new technology spread quickly, used in telegraphs, motors and lighting.

Not long after, the Moulin Rouge became the first building in Paris to use electricity to decorate its façade.

The designer of the Moulin Rouge, a man named Adolphe Léon Willette, always envisioned the space powered by bright red lighting both inside and on the exterior.

His vision was brought to life when the city of Paris granted the building access to electricity every evening after 10pm. The same electric red lighting can still be viewed by night today at the Moulin Rouge . 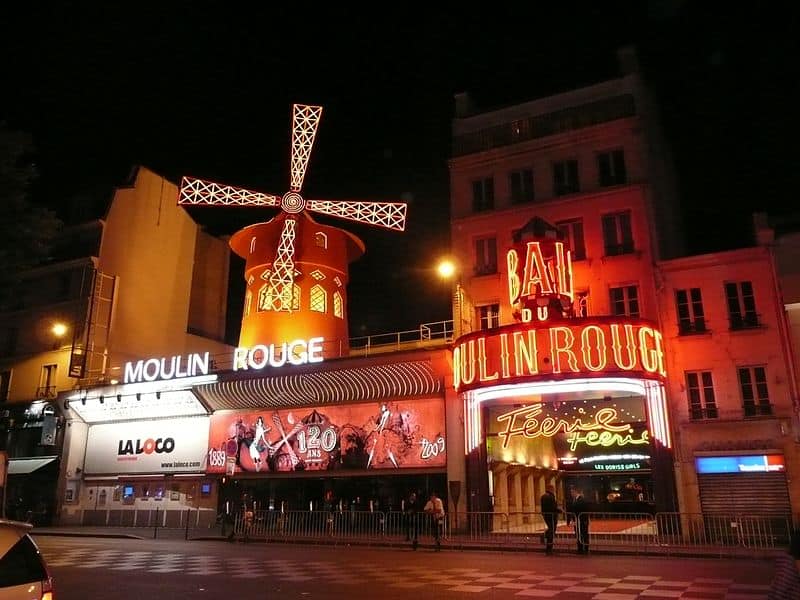 The club was first built in 1885;  it would later burn down in 1915 in a tragic fire that would see the club closing for six consecutive years. What you see today is thanks to the refurbishements!

2. It Houses One of the Last Remaining Windmills in Montmartre

Technically speaking there are a total of four remaining windmills in Montmartre. Those who only include the two at the top of Montmartre hill will argue otherwise, but in historic congruence the windmill atop the Moulin Rouge does qualify.

During the eighteen and nineteen hundreds there were over 300 windmills across Paris powering the various agricultural plants that needed them.

Today there are only a few of these left, all of which can be found in Montmartre. Visit the Moulin Rouge to see one of them still standing proudly overlooking the street. 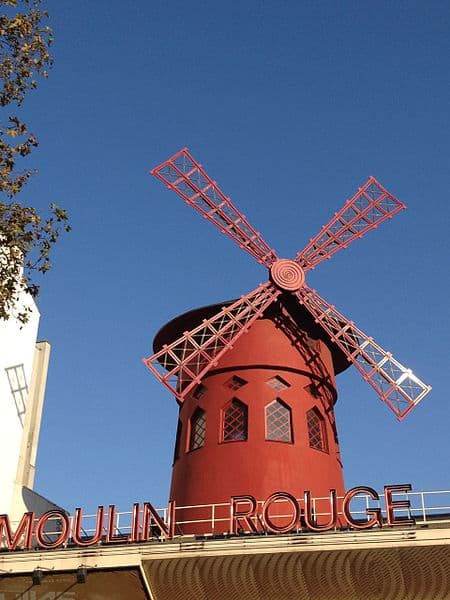 3. See Some of the Finest Cabaret that Paris Has to Offer

The Moulin Rouge doesn’t fall together on a whim; everyone inside the space are hardworking professionals who join their skills to put on the utmost best performances night after night.

The dancers at the Moulin Rouge are world class; trained in classical jazz and contemporary dance around the world.

Working with a team of choreographers, costume designers, set artists and producers, the cabaret shows are like nothing you’ll see anywhere else in Paris, and possibly the world.

4. Not All of the Dancers are Female

There is no sexism involved in the casting of the Moulin Rouge dance crew. Both men and women are welcome to audition and whoever is good enough gets the job.

Costumes remain the same across the board; its no easy task spotting the men from the women on the crowded stage.

5. Witness Where (and why) the Can-Can was Invented

Today the Can-Can is a universally recognized and celebrated dance around the world, very few people know that it was actually invented in the Moulin Rouge by accident.

Early dancers in the space experienced night after night of perverted men attempting to grope them inappropriately while on stage. The dancers would have to kick at the men to get them to behave; so saw the emergence of the Can-Can. 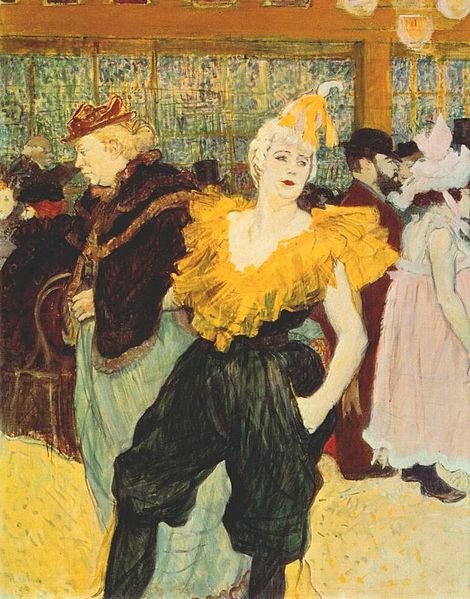 Inside the Moulin Rouge painted by Lautrec – by Petrusbarbygere – Wikimedia Commons

6. Experience the “Red” Neighborhood of Paris

Just after the Revolution in Paris, the lower end of Montmartre and Pigalle became the official red light zone for the city. It was the suburb to which you could go to where there were no rules; where sex and alcohol ruled the night and social status meant very little.

While this neighborhood around the Moulin Rouge is nothing like it was back then, it is still the unofficial “red” district of the city. All along the main strip you’ll find peepshows, strip clubs and more risqué bars than you can imagine.

7. Children Older Than 6 Are Allowed Inside

This one shocks some people when they first find out. Yes, children older than the age of six are allowed to accompany their parents into the performances inside the Moulin Rouge.

Many years ago this would not have been suitable, as the culture inside the club was very, very different. While the shows still involve a lot of bare skin and high-leg lifting, is it thought that an accompanied child can attend without fuss. 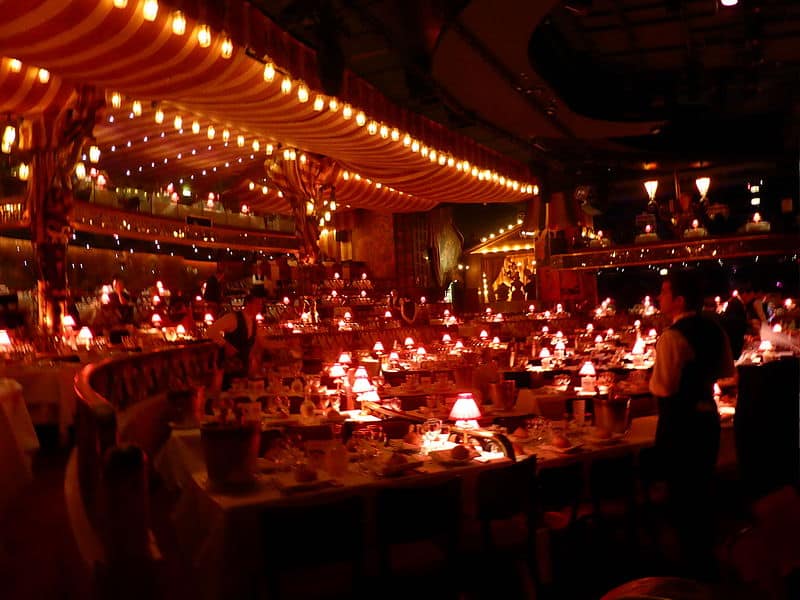 8. You Can Dress for the Occasion

The largely laid back and slightly sleazy nature of the Pigalle strip (on which Moulin Rouge sits) often allows for patrons to neglect effort in their appearance for an evening out.

To try and keep a element of class in the space, the Moulin Rouge has strict dress code rules that all attendees must adhere to. No shorts, flip flops, sports shoes or sports clothing are allowed into the venue.

If you have been on a casual free guided walking tour of the area during the day and would like to visit the Moulin Rouge later on, you’ll likely need to go home and dress for the occasion. 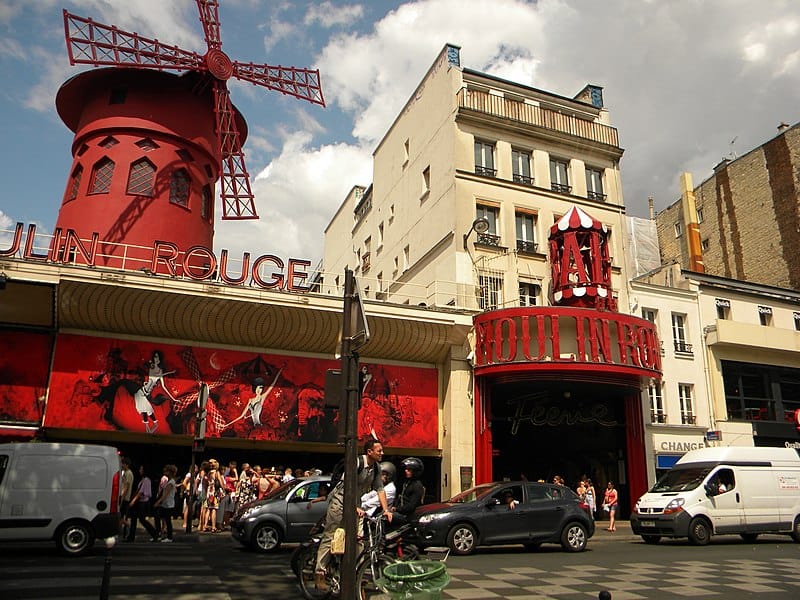 9. There are Different Ticket Packages to Suit Everyone

Back in the day, the Moulin Rouge had a single entrance fee that got you access into the club and what you did once inside was at your own expense.

Things are run slightly differently these days. Getting access to the club depends largely on the experience you would like to have. There are regular tickets, VIP tickets, VIP with dinner tickets and VIP with drinks tickets.

Most of the packages begin at €190 and go up depending on your added extras. Discounted tickets are available for children.

10. It is One of Paris’ Biggest Attractions

When one thinks of Paris there are a few distinct things that come to mind: the Eiffel Tower, croissants, wine… and the Moulin Rouge.

It is one of the most recognizable landmarks for the city of Paris around the world, and the success of Baz Lhurmann’s film titled with the same name has contributed to this significantly.

Whether you visit the Moulin Rouge for the full experience, or simple just stop by for a scope of the exterior, behold the historic attraction for what it is; an integral part of Paris’ city center. 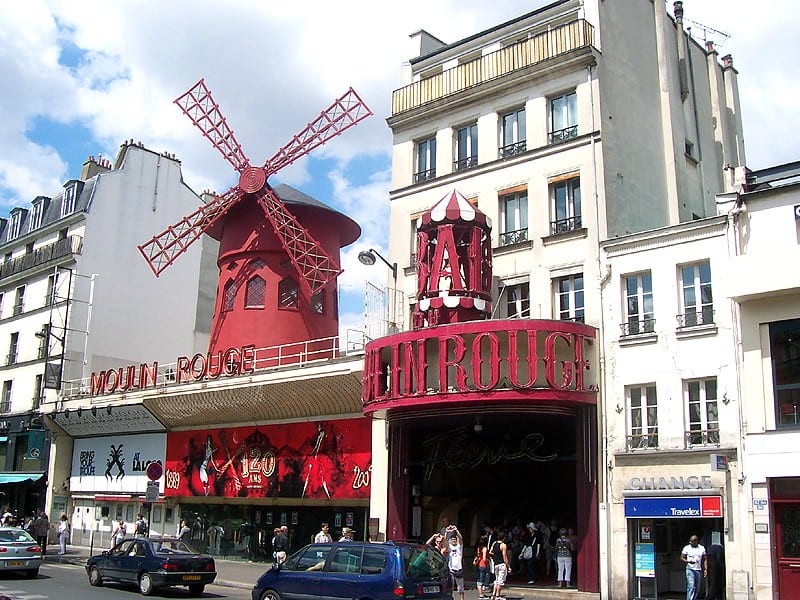 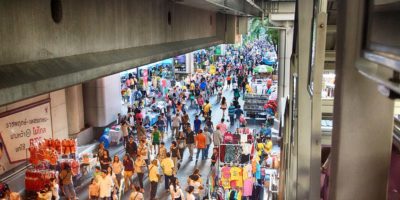 The Best Places for Walking in Bangkok