The 1 Biggest Controversy of the Sacré Coeur 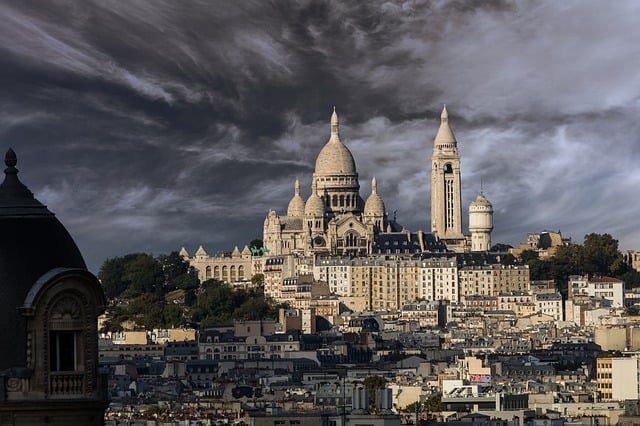 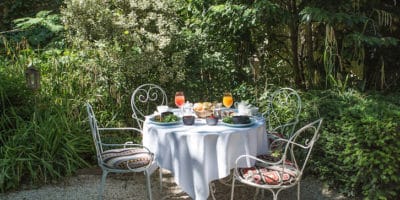 Top 5 Bed and Breakfasts in Paris 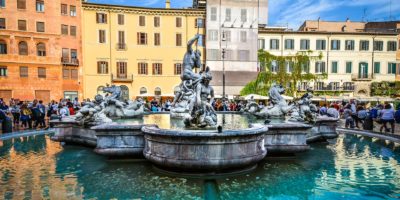 The 1 Biggest Controversy of the Sacré Coeur

The Sacré Coeur Basilica in Paris is pretty hard to miss. It sits on the top of the hill of Montmartre – one of the highest points in the city – overlooking a sea of grey rooftops. When the weather is nice (and honestly even if it isn’!), there are throngs of people that gather outside the basilica to enjoy the view, chat with friends or listen to the live music that seems to always be playing.

The outside of the church is unique, as it is made of white self-cleaning stone, which is much different than the other gothic churches in Paris. The inside of the basilica is not any less impressive, with France’s largest mosaic decorating the ceiling. The Sacré Coeur is my personal favorite church in Paris architecturally for it’s unique exterior and interior design, and for it’s great Montmartre location.

While the Sacré Coeur is a beautiful monument to visit, it is not without it’s controversies! From it’s inception, the basilica has raised questions and caused problems amongst Parisians. Keep reading for the biggest controversy of the Sacré Coeur!

The Biggest Controversy of the Sacré Coeur 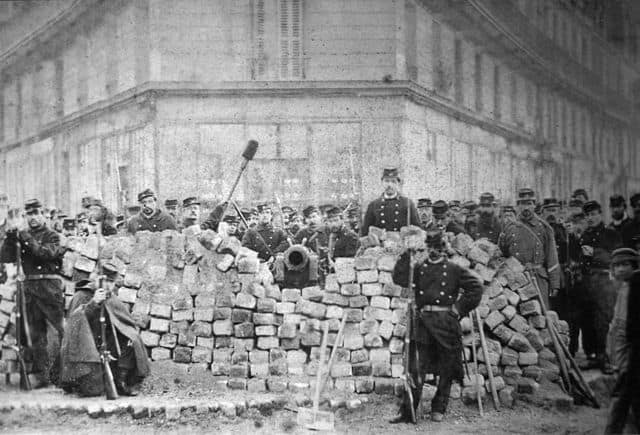 Before I jump into the controversies of the Sacré Coeur, I’d like to give you all a little bit of historical background on what was happening in Paris.

In the late 19th century, France was at war with Prussia. Prussia was a kingdom that was controlled by Germany, and in 1870 was at war with France. In September 1870, Prussian forces had captured Napoleon III, Emperor of the Second French Empire.

The Prussians invaded Paris despite National Guard soldiers that attempted to defend the city. These soldiers were known for their radical tactics. Despite their efforts, the Prussians overtook Paris in January 1871. Adolphe Thiers, the new leader of the French government since Napoleon III had been captured, signed an armistice with the Prussians. He agreed to call off the French army, but did not call off the National Guard. Remember this, it’s important!

As I’ve mentioned, the National Guard soldiers were pretty hardcore. By the time March 1871 rolled around, they had had enough of the control of the Prussians. The Paris Commune was formed! The Paris Commune was a radical and revolutionary group of National Guard soldiers that wanted to kick the Prussians out of Paris so that they could get their country back.

On March 18, 1871, a few Commune National Guard soldiers killed two French army generals, stating that they refused to be ruled by the new French government that was in cahoots with the Prussian forces. 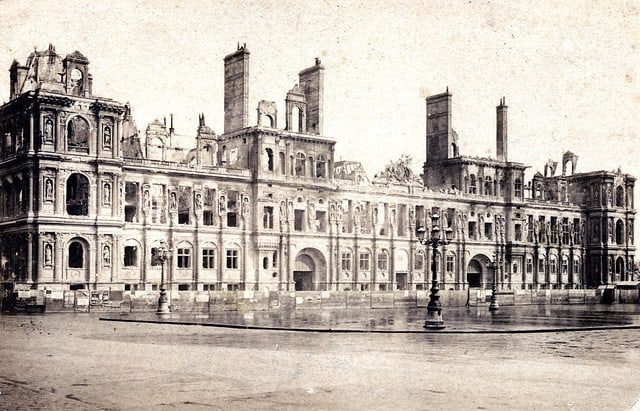 The Paris Commune governed the city for a little over 3 months, from March 18-May 28, 1871. The Commune was dismantled by the French government, by force. From May 21-28, the French army battled with the Commune in Paris. It is called La semaine sanglante, or The Bloody Week in English, for it’s violence.

By the time everything was said and done, the French Army had succeeded in taking back Paris from the revolutionary Commune. Many, many lives were lost and Paris was half in ruins. The Tuileries Palace was destroyed, in addition to the Hôtel de Ville. Houses were burned, debris filled the streets and the extreme violence had left an eerie feeling in the air. At least, that’s how I picture it.

The Sacré Coeur: an atonement 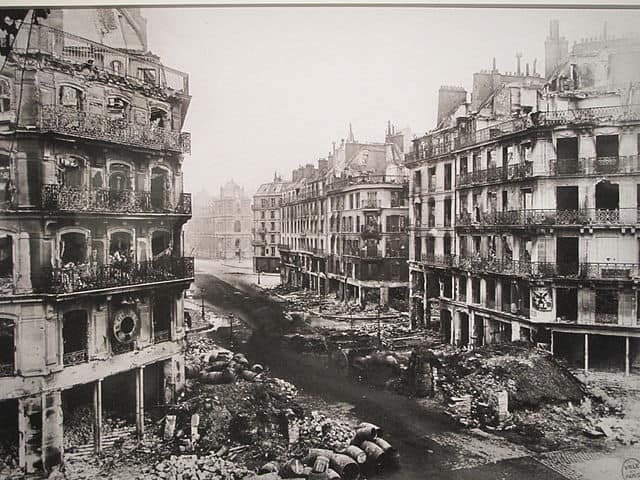 The aftermath of the conflicts of the Paris Commune on the rue de Rivoli, May 1871 – WikiCommons

So, why have I just told you all about the Paris Commune? Because you need to have that background information before I can tell you about the controversy surrounding the Sacré Coeur.

After The Bloody Week, the wounds from the Paris Commune were still fresh. Paris was a divided city: those who sided with the Commune, and those who sided with the French government. The Paris Commune was supported mostly by the working class that yearned for a democratic republic in France. So, when those workers had to get back to work for a government they no longer liked or trusted, you can imagine that tensions were pretty high.

In 1873, the National Assembly voted to erect a new church on one of the highest points of the city. The reason? The church would atone for the crimes committed by the Commune.

Paris is suddenly divided even deeper, with support for the basilica coming from the Catholic Church, and royalists that were against the Paris Commune. On the other side were socialists, revolutionaries and democrats.

The land where the future Sacré Coeur would stand was seized from its owners. This obviously didn’t go over too well for the people that had their property taken from them! The French government and the Catholic Church didn’t seem to care, and plans to build the basilica moved forward. 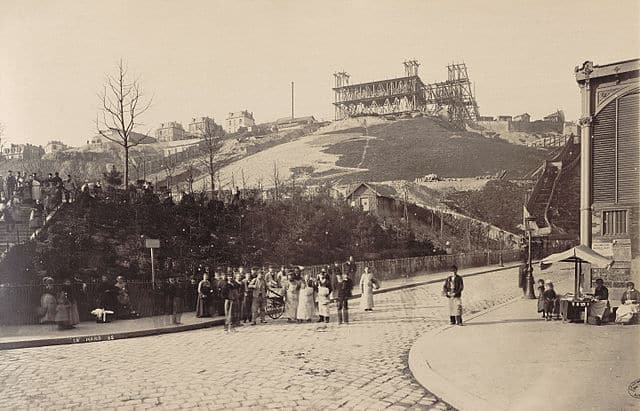 In 1875, the foundation was laid, but because of so much debate surrounding the construction, progress was very slow. In 1880, one debate went so far as to call the construction of the Sacré Coeur an incitement to civl war! French writer Émile Zola was very against the construction. He famously called it “the basilica of the ridiculous.”

Thanks to the many supporters and the architects involved, plans for construction moved forward, even if at a slow pace. The basilica was completed in 1914. 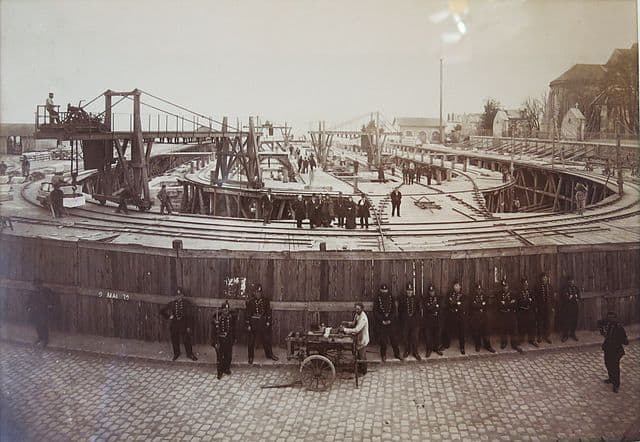 Even though the Sacré Coeur Basilica was completed in 1914, it doesn’t mean that it’s stories of controversy are over! Sometimes called the “white elephant” of Paris, there are still many that do not support its existence.

In 2013, amid the elections for the mayor of Paris, a Communist candidate named Ian Brossat, said that he did not like what the Sacré Coeur stood for, and if he was elected he would close it down.

For Brossat, like for many others at the time of its contruction, he sees the Sacré Coeur as a symbol of punishment for the Paris Commune. Brossat supports the revolutionary motives of the Commune, and he commends them for standing up against the bourgeoisie ruling class at the time.

In 2017, a Montmartre resident expressed his longing to have the basilica torn down, for the dishonor it gave to those who lost their lives for the Paris Commune. The comment emerged when the mayor of the 18th arrondissement (where you’ll find Montmartre) decided to propose a budget plan in which the residents of the neighborhood would get a say in what their arrondissement spent its money on. 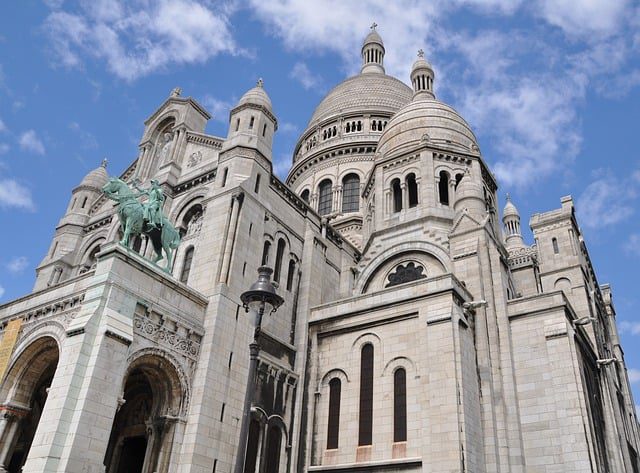 The mayor dismissed the idea, but as you can see there are still a lot of mixed feelings in Paris about the Sacré Coeur. It seems like you either love it or you hate it, and chances are if you love it unquestioningly, you probably don’t know the whole story of the church.

As I mentioned, the Sacré Coeur is one of my favorite churches in Paris for its architecture, but after doing the research for this article, I’m not totally sure I support its construction either!

Those that are on the same page of Brossat and that disgruntled Montmartre resident yearn for the revolutionary Paris of the past. While it can seem exciting to think about Paris in the state, it’s important to remember the violence and death that come along with revolution.

If you’re a tourist visiting Paris, or someone doing some research before their Paris trip, I’m willing to bet that you didn’t know the controversial side of the Sacré Coeur!

There are initiatives in recent years to memorialise the Paris Commune rather than vilify it. There are talks of changing metro stations to include the Commune (the Council of Paris suggested a station called Belleville-La Commune in 2015), or perhaps a rue named after Louise-Michel, a woman instrumental in defending the Commune.

I’m a firm believer in letting both sides of a story be told, and I think this is becoming more and more important as more time goes on. So, here’s hoping that one day the Paris Commune gets the recognition it deserves in this beautiful city!

Are you interested in learning even more about the Paris Commune, the Sacré Coeur and Montmartre?! Well, you’ve come to the right place ladies and gentlemen, because our walking tours in Paris are perfect for learning! Tour the city with one of our awesome local guides, and they are sure to amaze you with all of their knowledge about Paris! Click here to explore all of our different options. 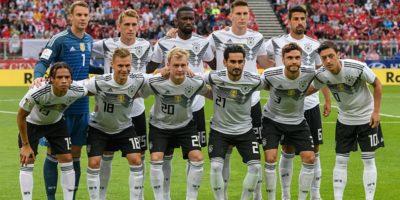 Munich – Activities and Things to Do