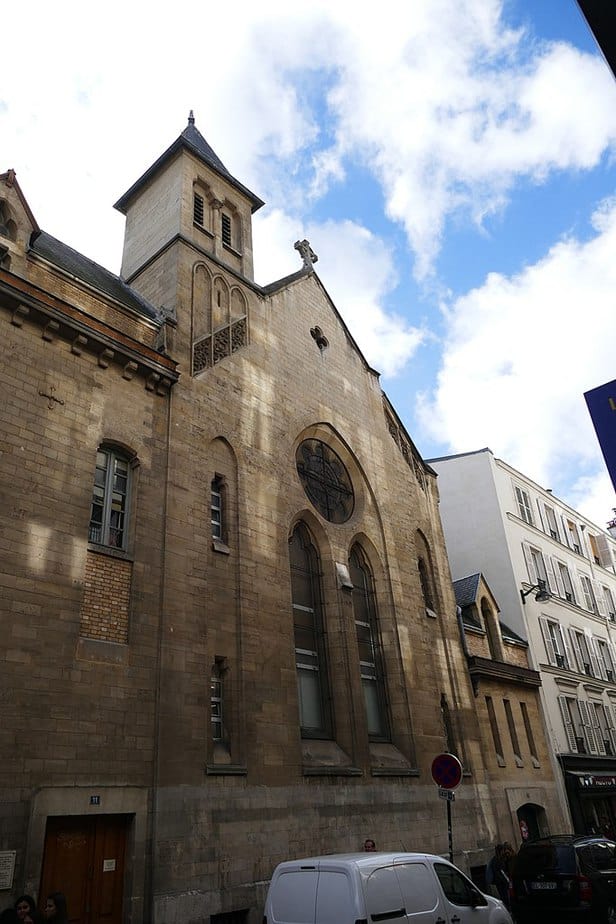 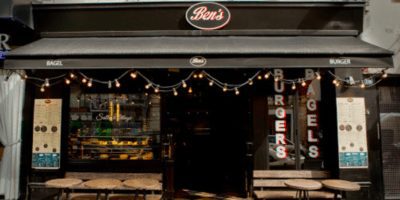 Where to find Late Night Food in Paris 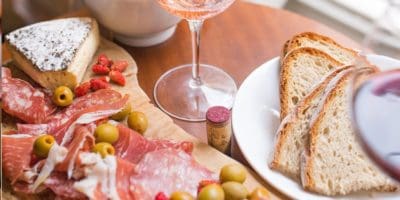 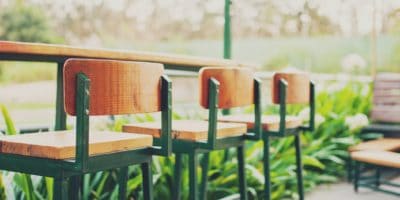 Montmartre is definitely one of the most visited areas of Paris, and it’s not hard to see why! Once a village located outside of the city walls, Montmartre still feels like a section apart from the hustle and bustle of Paris’ center. I know that personally it’s my favorite section of the city and I’m crossing my fingers that I find an apartment there someday!

Montmartre is known to most as an artists haven, or a place to catch a burlesque show at the Moulin Rouge. But, did you know that Montmartre is also a hub of activity for Christians all over the world?

Located just outside the metro Abessess and the famous “I Love You” wall at the base of Montmartre lies la Crypte du Martyrium de Saint Denis. You may be asking yourself…what does that even mean?! Well, it translates into English as the Martyrium Crypt of Saint Denis. Keep reading to find out more about Saint Denis, the crypt itself, and what you can find there!

1. Saint Denis was a Christian martyr 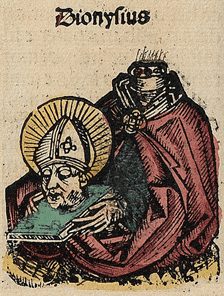 Depiction of Saint Denis in the Nuremberg Chronicles – WikiCommons

The first fact about la Crypte du Martyrium de Saint Denis that I’d like to share with you is the story behind Saint Denis. Saint Denis was the bishop of Paris in the 3rd century. According to his biography he was martyred by decapitation in Paris for his faith along with his fellow worshippers Rusticus and Eleutherius.

Saint Denis is one of the most famous cephalophores in Christian legend! A cephalophore is a saint that is depicted with his head removed. There really s a word for everything, huh?! Legend has it that after Saint Denis was decapitated, he picked up his head and walked quite a distance, preaching the word of God before he finally died.

Saint Denis is now the patron saint of France and Paris!

2. And it’s said that la Crypte du Martyrium de Saint Denis is where he was martyred 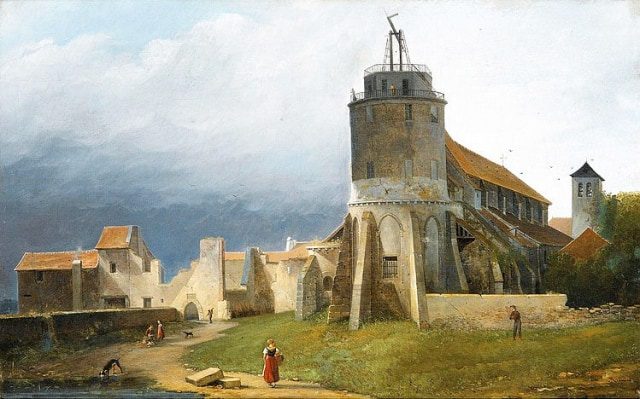 Saint Denis’ body is said to have been buried in a cave in Montmartre. Well, in 1133, King Louis VI and Adélaïde de Savoie founded the Saint Pierre of Montmartre Abbey. The abbey was entrusted to a group of Benedictine sisters, and the chapel was dedicated to Saint Denis.

One day, in 1611, a crypt with an alter and a carved stone was discovered hidden beneath the chapel, and it was believed that it was the exact place where Saint Denis was martyred!

From this point forward, the crypt and the chapel became a very popular place of pilgrimage for Christians all over the world. Even Queen Marie de Medici, the wife of French King Henry IV made a pilgrimage there! More on pilgrimages coming up…

3. Montmartre is a place of pilgrimage 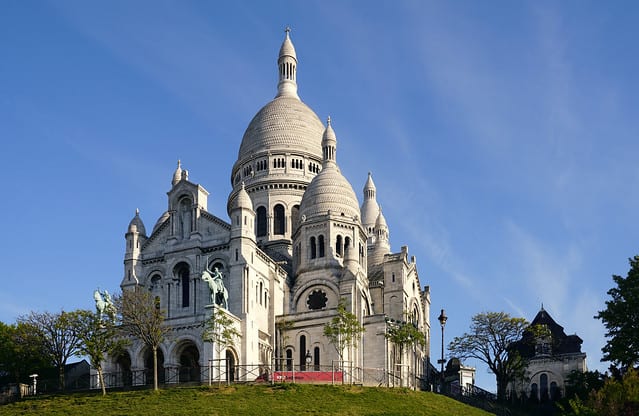 I’ve already mentioned that Montmartre is quite the hot spot for Christians. There are 4 churches on the hill of Montmartre including the Sacre Coeur, which I definitely recommend checking out if you haven’t already!

Today, there are many Christians that continue to make pilgrimages to Montmartre, notably to la Crypte du Martyrium de Saint Denis and the Sacre Coeur.

The website for the Sacre Coeur is really helpful when planning a pilgrimage if it is something that interests you. Click here to send them a message so that they can help you out with pilgrimage routes, meals, accommodations and more!

4. The Vow of Montmartre was given at la Crypte du Martyrium de Saint Denis 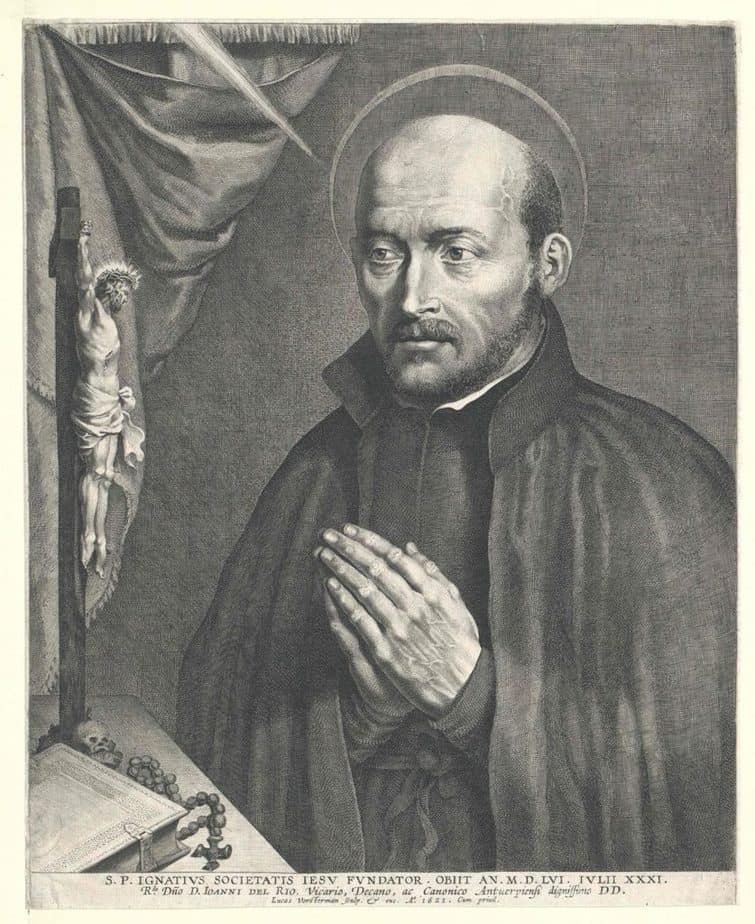 Drawing of Saint Ignatius of Loyola, located in the Austrian National Library – picryl

The Vow of Montmartre was a vow taken in 1534 in the Martyrium by Ignatius of Loyola, Francis Xavier, Pierre Favre and others to lead a life of poverty and chastity. These three men are important figures in the Christian faith. In addition, the group also vowed to make a pilgrimage together to Jerusalem.

The vow was taken when Pierre Favre, who was the only priest in the group at the time, gave the rest communion. This vow was the beginning of the Society of Jesus, a scholarly religious Congregation of the Catholic Church.

It wasn’t until 1540 that the group was officially recognized and approved by Pope Paul II. The group is known today as the Jesuit Order, and in 2013 one of their members, Jorge Mario Bergoglio became the first Jesuit to be elected Pope. He took the name of Francis, and remains Pope today!

5. The stone altar inside the chapel is a remnant of the original Crypt du Martyrium

When the crypt of Saint Denis was discovered back in 1611, an altar and an engraved stone were found. The same altar that was found remains in the crypt today! 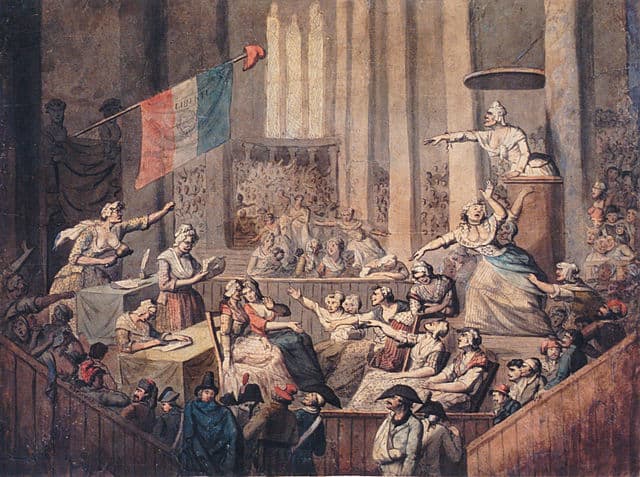 Group of Revolutionaries inside a church by Chérieux – WikiCommons

Like many, many things in Paris and its surrounding areas, the original Crypte du Martyrium de Saint Denis was destroyed during the French Revolution. Not only the crypt, but the chapel and abbey were completely destroyed as well.

The French Revolution wasn’t solely directed at the royal family. French people nationwide were also fed up with the power that Pope and Rome held over France. This resulted in the destruction of many churches throughout Paris, including the Saint-Germain-des-Prés church. Over 30,000 priests were exiled or killed. The Revolutionist even got rid of the Christian calendar and implemented their own, with days celebrating victories of the Revolution!

A really important event that marked the “dechristianization” of France and Paris was called the “Festival of Reason” that was held in 1793 inside the Notre Dame. The Revolutionists not only didn’t want a king, they didn’t want a pope either.

It took quite some time for the crypt of today to be rebuilt after the French Revolution. It was completed between 1884 and 1887, and was headed by the Society of the Helpers of the Holy Souls. This society is a female religious congregation that was inspired by the same Saint Ignatius who took the Vows of Montmartre hundreds of years before!

The crypt you can see today is located in the chapel of the Society of the Helpers of the Holy Souls. After the new crypt was finished, it was blessed in 1887, and to this day honors the taking of the Vows of Montmartre and the martyrdom of Saint Denis.

8. You can see a 13th century representation of the decapitation of Saint Denis inside la Crypte 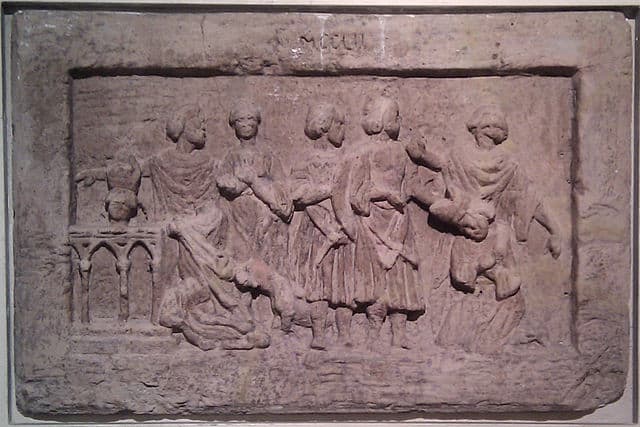 Engraved stone inside the crypt by Remi Mathis – WikiCommons

Inside the crypt, you’ll find a pretty amazing carved stone from the 13th century that represents the decapitation of Saint Denis. This is something I love about Paris: there is ancient art and history around nearly every corner!

This is one of the only artefacts to survive the destruction of the original crypt during the French Revolution. Historians are obviously quite thankful that this treasure remained! 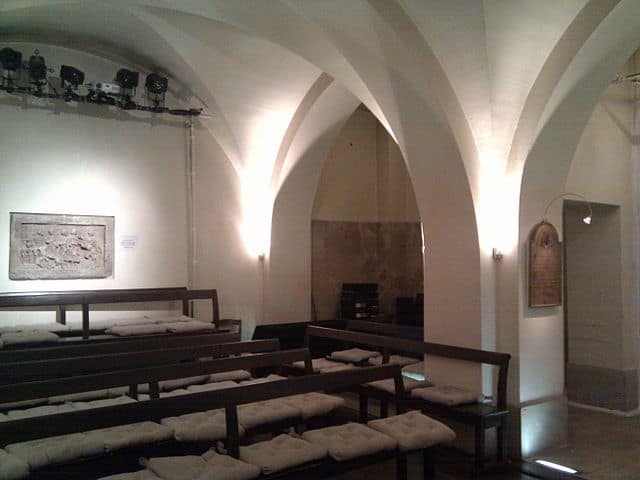 Inside the chapel of the crypt by Remi Mathis – WikiCommons

Yet another thing I love about Paris: every inch of the city is utilized to the max! You’ll find plays, poetry readings, and concerts that are held inside churches all the time. Check out the amazing performances in the Sainte Chapelle if you haven’t yet!

And, especially if concerts are your thing, you’ve come to the right place at la Crypte du Martyrium de Saint Denis. On the first Sunday of every month, there is a concert performed in the chapel at the crypt. Click here for more details.

If you’d like to check out the crypt without going to see a concert, the Association of the Crypt of the Martyrium of Saint Denis and the Remembrance of Saint Ignatius of Loyola, who is responsible for the upkeep of the crypt, open the historical and religious site up to the public on Friday afternoons from 3pm-6pm. It is also open at the same time every first Saturday and Sunday of the month!

Side note: many of Paris’ monuments and museums are free on the first Sunday of each month! Click here for a list of all of the places you can visit.

There you have it, my favorite 10 facts about la Crypte du Martyrium de Saint Denis in Montmartre! You really do learn something new everyday, right?! That is, if you visit the Discover Walks blog daily.

I hope you’ve enjoyed reading this article and learning more about this gem at the base of Montmartre. If you want to learn even more about this Parisian neighborhood, click here to check out our walking tour options! 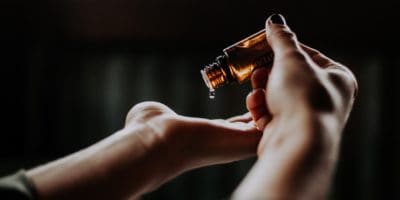 Where To Buy Bio Cosmetics in Paris