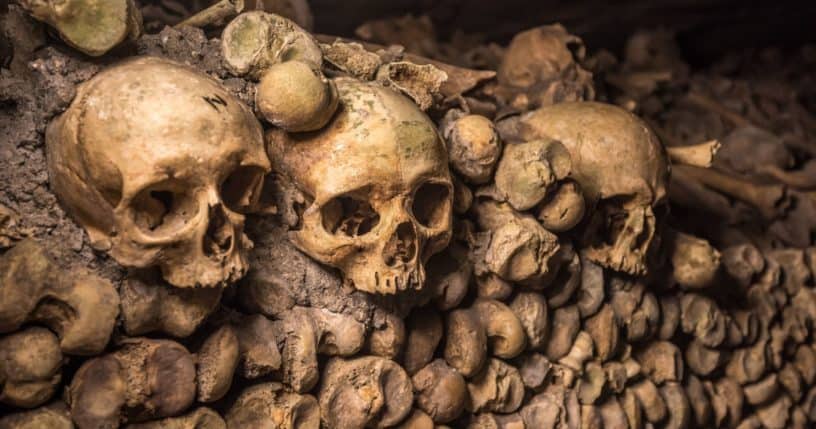 Paris, the city of light, romance, culture, and…mounds of 18th century corpses? The Paris Catacombs are even more interesting in juxtaposition to the lively streets tourists all over the world have come to know and love. It’s almost ironic that a city known for its celebration of life would have such a dark secret hidden underneath. 20 meters deep, 243 steps to climb down, and 11,000 m2 total, it’s a pretty massive secret too.  You can read here for even more secrets about this eerie site. You can also take one of our guided Catacombs tours!

The site was initially constructed as the “Paris Municipal Ossuary” in 1786, and later became known as the famous“Catacombs”, inspired by the widespread infatuation with the Roman catacombs. It wasn’t until 1809 that the Catacombs were opened to the public.

What’s even more interesting is how high up on everyone’s bucket list the Catacombs are. Nothing says enjoyment like walking through piles of century-old skeletons in cold, dark, stone made crypts. With so many things to do in and around Paris, it may seem like a bleak activity. Most people do, however suggest visiting this site at least once while in Paris! Here are some fun facts about the Paris catacombs that will either make you want to buy a ticket or perhaps a ouija board.

The Catacombs house the remains of over six million Parisians from the 18th Century. 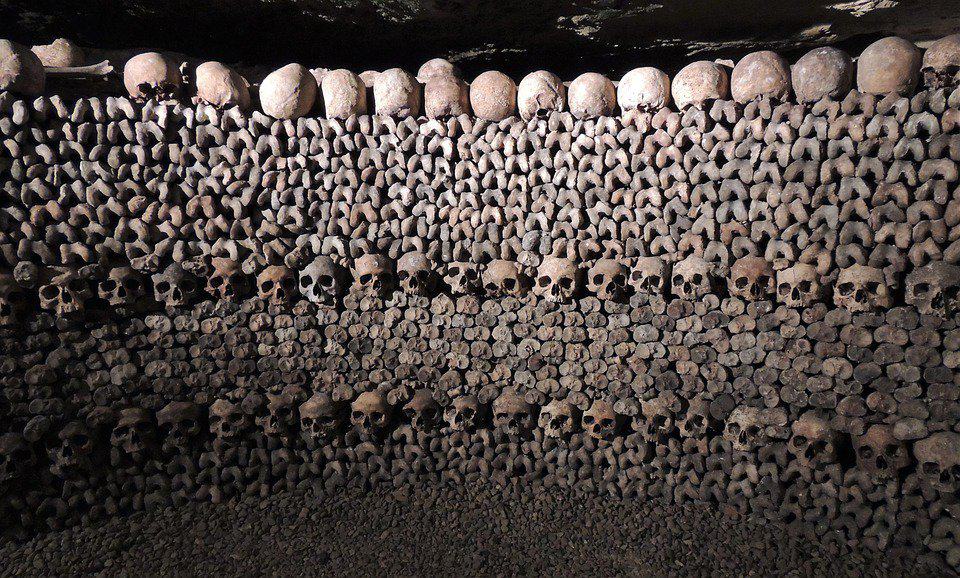 That’s right. Directly under your feet, are the remains of six million people. The reason the catacombs exist is because in the 18th century, cemeteries were often overcrowded, and bodies were not buried properly. This caused disease to spread throughout the city. Though it may seem very dark to have stuffed millions of the dead underground, this was a practical for a city with rapid growth to have resting place for all  those who passed. This was the only solution for such a major public health threat. You can read more about the history of why the  Catacombs were built here.

People have gone swimming in the Catacombs 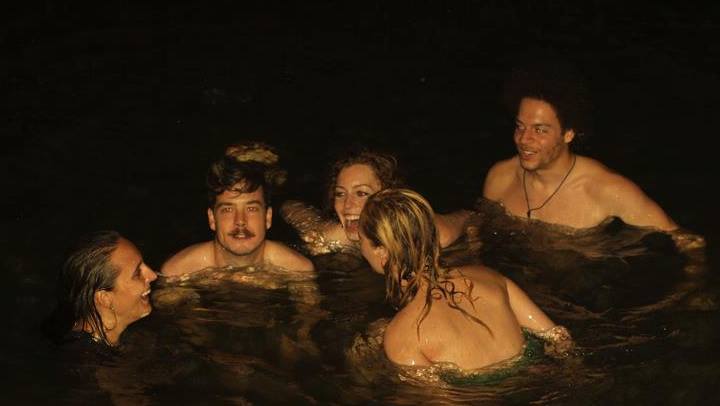 If you think walking through the catacombs is a bit on the safe side, some people have plunged themselves in the dark murky underworld waters–for fun! The cataphiles are a group of people in Paris who enjoy spending time in theCatacombs of Paris on a regular basis. If that doesn’t sound appealing to you, don’t worry. There are other more practical places to take a dip in Paris.

People have died in the Catacombs! 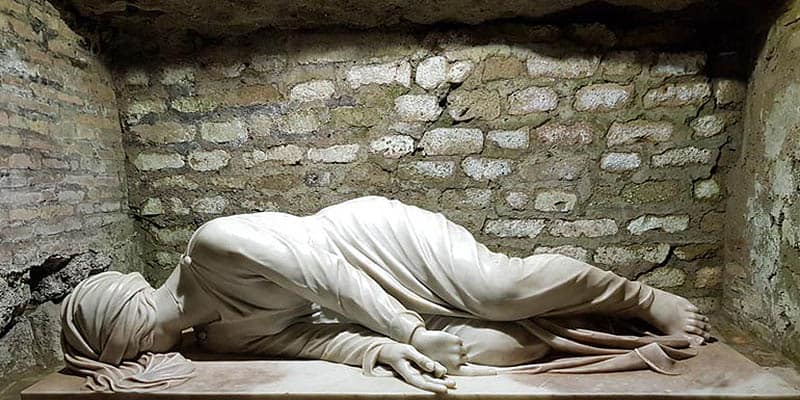 You heard that right. If an underground tomb with millions of bodies isn’t enough to freak you out, here’s another creepy story. Philibert Aspairt was a doorkeeper of the Val-de-Grâce hospital during the French Revolution. He entered the catacombs in 1793 and never resurfaced. His body was not discovered 11 years later, and his cause of death was undetermined. His final resting place? The catacombs, no surprise there. An even darker fact was that he was found right near an exit…

Sure, not many deaths are attributed to the Catacombs, but a lot of people have gotten lost. in 2017, two teens got lost in the Paris Catacombs for 3 days!

The Catacombs were used during World War II 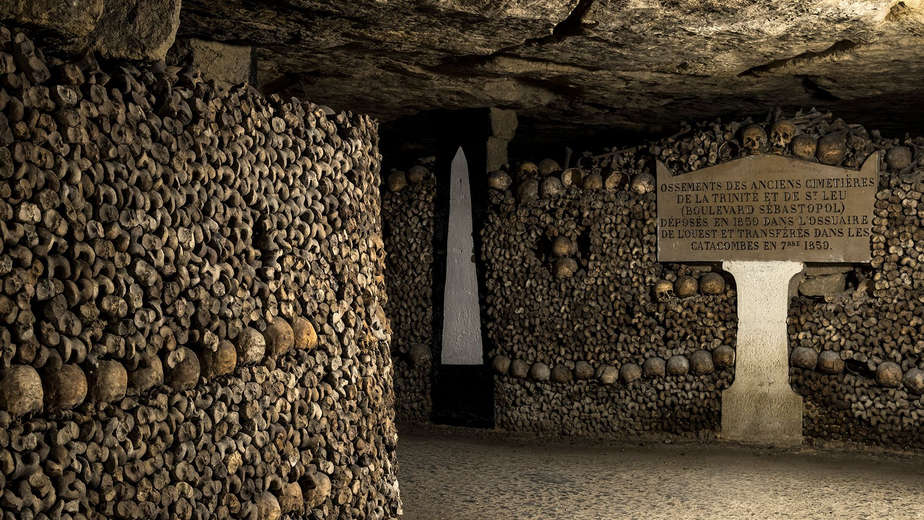 What is even more interesting is that the catacombs were actually used by both sides during the war.

Those in the French Resistance were actively using the underground tunnels as a hide out during the war and plan attacks against the Germans. The underground tombs and tunnels concealed the resistance members from German spies and allowed them to escape without being found. Doesn’t sound like the safest place to hide…Not only the French used the Catacombs, either. The Nazis also had built various bunkers in the underground crypts to avoid being caught.

They arrange the bones in decorative displays 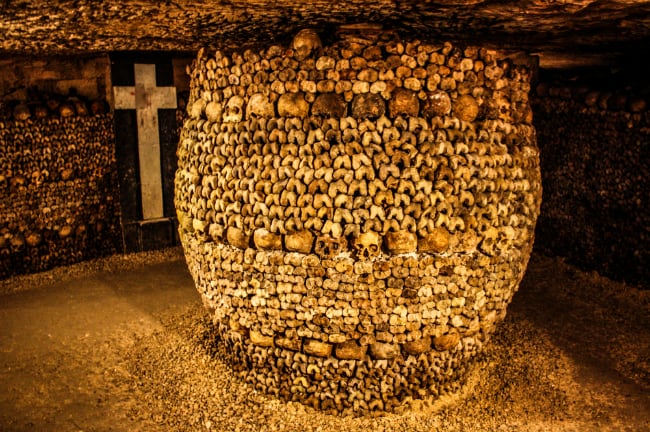 At first, the bodies were just being thrown into the crypt tunnels via cart. Then, someone decided to get creative. Those who were working in the Catacombs decided to start displaying the bones in decorative shapes, They probably thought this would make the atmosphere lighter, more entertaining. They were actually built this way to attract tourists. There is even a famous bone barrel (pictured) holding up the top structures. Seems almost poetic that the dead are being used as a pillar to hold up the ceilings.

Now with these fun facts, do you feel ready to take the 243 steps down into 6 million graves?