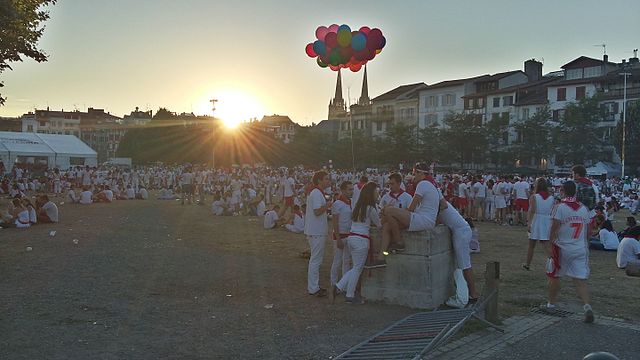 Something that I noticed right away about France and French culture is that they love holding fêtes, or festivals. I’m from a small town in America, and while we do celebrate holidays and have things like block parties, barbecues and small celebrations, you just don’t really see that type of thing. At least in my small seaside town!

In the summertime especially, festivals pop up all over France, and occur nearly every week. An excuse to hang with your neighbors and drink wine outside for an afternoon or weekend? Sign me up!

Today, I’ll be filling you in on Les Fêtes de Bayonne. Bayonne is located just next to Biarritz in Basque Country, the south-western corner of France on the border of Spain. This region of France is unique as Spanish and French cultures collide, forming a unique blend of the two countries’ food and traditions.

The festival occurs every year on the last weekend of July before August. The dates for the 2019 edition are July 24-28!

Dates: The festival occurs every year on the last weekend of July before August. Visit the official website below to learn the exact dates, which vary per year.

Entry fee: 8 euros for the Bracelet Pass Fêtes, which will give you access to the entire festival. 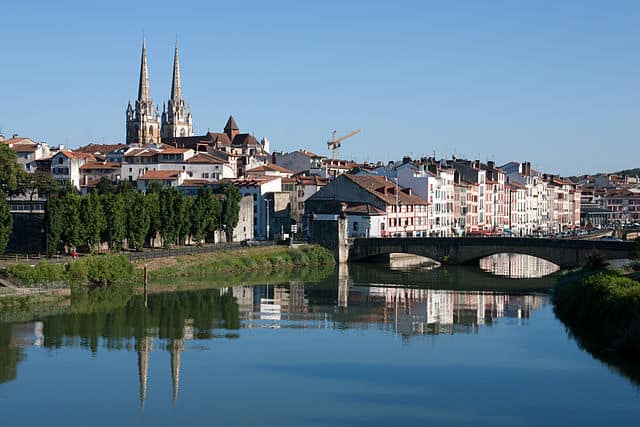 As I’ve already mentioned, Basque Country is a territory nestled on the border of France and Spain. The territory extends between both countries. The northern section is completely in France, and the southern section is in Spain. There are three provinces in each country that belong to the territory.

They have their own traditions, food and even a language! I can attest that their food is delicious. Make sure to try classics like squid served in its own ink and Marmitako, a tuna and potato stew.

The scenery is absolutely beautiful, and is definitely a top reason to head to Bayonne for the festival! The town is located on the Adour River, with colorful houses lining the edge. The narrow streets lined with homes, restaurants, cafés and boutiques are adorable, and are filled to the brim with people during the festival. If you’re feeling adventurous, follow the river west to see where it meets the Atlantic Ocean!

2. Les Fêtes de Bayonne is the largest festival in France 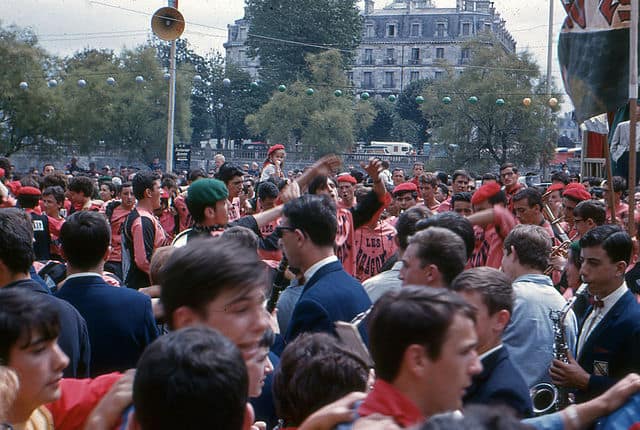 If you want to cross “go to biggest festival in France” off your bucket list, you need to head to Les Fêtes de Bayonne!

The festival has been put on annually since 1932, and was called off only once: from 1940-1944, during World War II. It was originally called the “Big Summer Festival,” and was thought up by a group of friends and rugby teammates. They wanted to create a festival in Bayonne that was similar to the ones held in Pamplona, Spain, another major city in Basque Country.

If you plan on heading to the festival, get your white and red clothing ready! If you want to get really traditional, make that a white shirt with a red scarf and red belt. 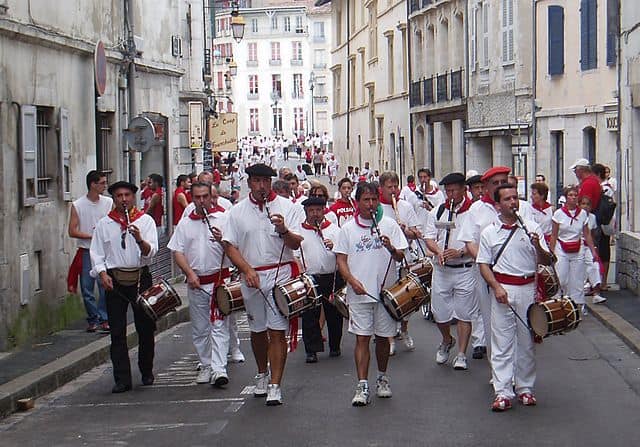 Les Fêtes de Bayonne has been around for quite a while now. I’ve already told you about the beginnings on the festival: the group of Rugby friends that were inspired by Pamplona in 1932.

Many traditions that have been around since the very first festival are still going strong today. This includes the cow races, the red and white costumes, and one of the most important traditions: the key toss by King Leon (more on him later)!

There are pelote tournaments as well. Pelote is a game, particular to Basque Country, that is played with a ball and a racket against a wall. I’ve never played racquetball before, but I imagine the two games are similar! It can also be played between two teams, with a net placed between them.

There are bullfights, which have become a little controversial in recent years, but Bayonne’s residents insist have been a vital part of the festival since it’s start.

Don’t miss the massive parade, or corso, which according to Les Fêtes de Bayonne’s official website attracts up to 350,000 each year. In Bayonne, there are over 80 different associations, called peñas. These associations were created to encourage cultural and touristic events in Bayonne. The peñas are obviously very actively involved in Les Fêtes de Bayonne and the corso! 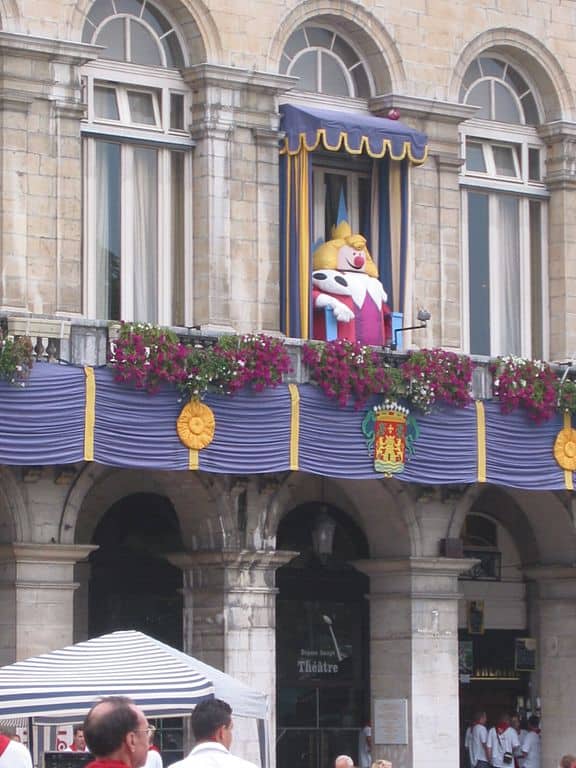 Are you itching to learn about the mysterious King Leon of Les Fêtes de Bayonne? You’ve come to the right place.

King Leon is the official mascot of the Les Fêtes de Bayonne, and is a giant puppet that reigns over the festival from the balcony of the Town Hall. On Wednesday evening, after the first day of the festivities, King Leon officially opens les fêtes at 10pm. The next day, the King is joined by the rest of his court: six figures which represent the traditions and history of the festival. These figures are also in the form of six giant puppets that join in on the parade that awakens King Leon each day of the festival.

Les Fêtes de Bayonne also calls upon a celebrity each year to throw three keys to the city from the balcony of the Town Hall into the crowd. Superstar Johnny Hallyday was once the “chosen one,” to give you an idea of how huge this festival is in France!

Every day of the festival, starting on the Thursday after the opening ceremony, King Leon enters the place de la Liberté at lunchtime to kick off the festival for the day. You can catch the King on the Town Hall balcony all day long, encouraging the party to continue. At the end of the festival, on Sunday, King Leon mysteriously disappears into the night, only to be seen next year! 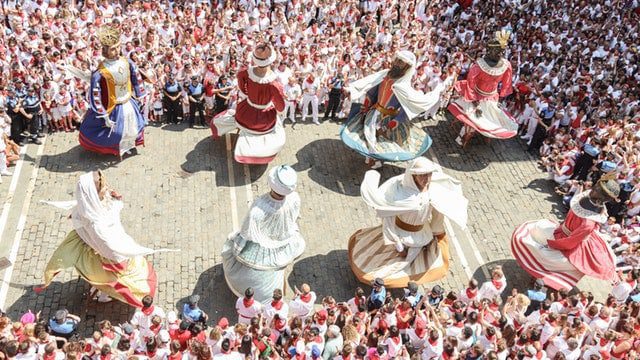 Saturday is the Dia de Pamplona, or, Pamplona Day.

Bayonne is actually twin cities with Pamplona, so it’s no surprise that the original festival-goers were inspired by the San Fermin festival, held in Pamplona each year. However, a major difference between the two is that Pamplona is famous for its “Running of the Bulls” through the center of the city. In Bayonne, cows are used, making it a lot less dangerous!

Saturday is a special day during the festival, as the events and activities pay homage to Pamplona for inspiring Les Fêtes de Bayonne.

If you’re in France this summer, I definitely recommend you check out Les Fêtes de Bayonne! I hope this article has given you all of the information you need to be inspired to take the trip down.

If you want to learn more about traditions and festivals in France, I also recommend that you join one of our walking tours in Paris! We pride ourselves on our local guides, who are sure to have some insiders information on festivals like Les Fêtes de Bayonne!