Back in the day, Paris was actually one of Europe’s beer brewing capitals. During the 18th and 19th centuries, you could stop into your corner brasserie and enjoy a delicious, house-brewed pint. Nowadays times have changed, and the local brasseries that were churning out great beers a couple centuries ago have shifted their focus to food. As you can imagine, the brewery game has since been dominated by global corporate giants like Anheuser-Busch and Heineken.

Several years ago, when I first moved to Paris, it was nearly impossible to find a craft beer in the city. Let alone a Parisian microbrewery!

But luckily, the food and drink scene in Paris is always changing and evolving. Over the last few years, the city has seen a growth spurt in craft beers. And now that it’s à la mode again, microbreweries are popping up seemingly on every corner. But which ones are worth a try? I’ve put together a list of the top 5 microbreweries in Paris to help guide you! 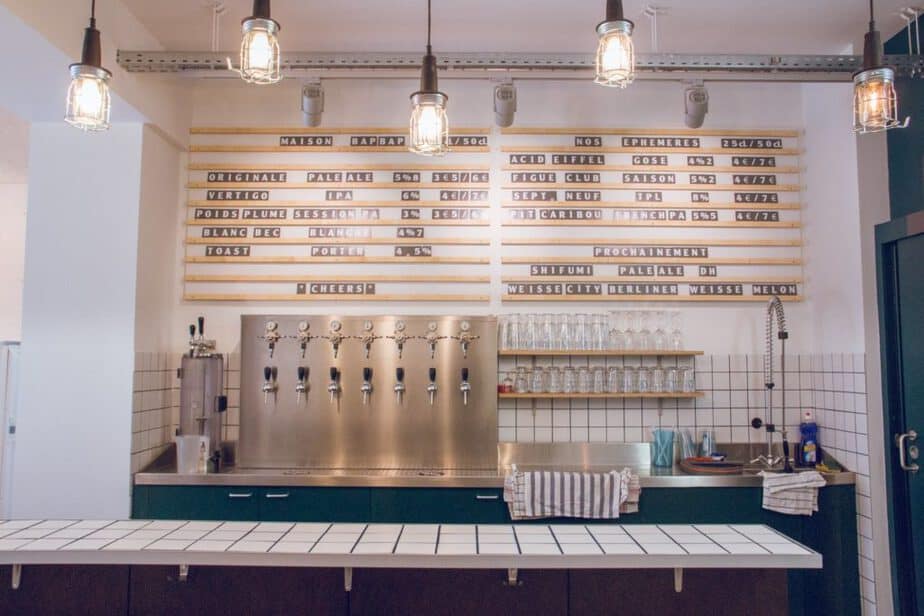 The first stop on our tour of the top 5 microbreweries in Paris is Maison BAPBAP. This Parisian institution was born of two middle-school friends who shared a passion for craft beer.  Eventually they both became master brewers and they opened Maison BAPBAP.

If you’re wondering about the name “BAPBAP”, it’s actually an acronym. It stands for “brassée à Paris, bue à Paris”, which translates to “brewed in Paris, drank in Paris”. They live up to their logo and BAPBAP is a hit with Parisian beer lovers!

Their offerings change seasonally, but there’s an excellent variety. With around ten beers on tap at any one time, there’s definitely something for everyone! IPA, Porter, Red Ale, Pale Ale, White beer, Gose, Sour, Belgian Triple, you name it. They’ve probably got it.

Maison BAPBAP is located the middle of the cool and hipster 11th arrondissement, right next to Oberkampf. But what’s really cool about Maison Bapbap is that everything about the beer-making process takes place on site. From crushing the grains down to the bottling and even labeling. Their 6-story brewery is a whopping 1,800 square meters, which is huge!

The brewery is open for tours and guided tastings, so you can learn about how that delicious beer is made! Tours last an hour and a half and cost €15 per person. They’re pretty informative, and there’s a lot to see. And taste, because it also includes 4 beers! You can reserve a spot here.

Located in the 18th arrondissement of Paris, this neighborhood used to be pretty grungey. As so many other areas in the city, it has undergone a lot of change over the past several years! The Goutte d’Or as the neighborhood is known, now boasts one of the coolest and avant-garde restaurants and bars in Paris. The areas’ namesake brewery is no different. Hip while remaining laidback and welcoming, the atmosphere at the brasserie is the perfect place to relax with friends.

What I love about Brasserie de la Goutte d’Or is their originality. You won’t find run of the mill lagers or plain old pilsners here. But you will find updated versions and flavor combos which are sure to surprise even the most experiences palates. Imagine a season beer flavored with apple and buckwheat. Or a dry rice lager, or even a passion fruit ale. But don’t take my word for it, try for yourself! They have upwards of a dozen beers, so you may have to make a repeat visit to taste them all.

As an added bonus, Brasserie de la Goutte d’Or has just opened  le patio  just a couple blocks away. Featuring live music, craft beers, Mediterranean cuisine and even an art gallery, this little patio won’t be around forever. They close July 28th, so go check it out before it’s gone!

wednesday through friday from 18:00-midnight

There was no question about whether to include this spot on my top 5 microbreweries in Paris! Tucked away on a quiet street just minutes from the Canal Saint-Martin is Le Triangle. You’ve heard the old saying “don’t judge a book, (or bar) by its cover”, well in this case it’s true. The basic and minimalist exterior can’t prepare you for the incredible beer and food awaiting you inside!

Run by a French-Canadian team, the master brewers at Le Triangle really know what they’re doing. They brew their own beers on site, and they’re seriously tasty. The Triangle Porter is usually available, but they brew everything from sours, to dry-hopped pale ales, reminiscent of West Coast beers. Offering 8 craft beers on tap, 2 of them are usually house-made. The selection changes regularly, so Le Triangle is worth a repeat visit. They also stock a good number of bottled craft beers from all over the world, so you’re sure to find one that’s right up your alley.

The blend of Italian, French and Canadian food is simple yet well-thought out and modern. Everything is made fresh, including their appetizers. The homemade potato chips and dip are the perfect match for an after work brew. In colder months, their homage to Canadian Poutine is hearty, decadent, and delightful to the last bite. And if you decide to eat here, be sure to ask about beer pairings for your meal! The staff are super knowledgeable and very friendly.

It’s a small and cozy space with a handful of tables, which fill up nightly for dinner. There are a couple seats at the bar as well, and if weather is nice, there’s a chance you can sit in one of the few tables outdoors.

But, the best part is yet to come! Le Triangle cans their own beers on site, and any of their beers on tap are available to-go. Everything happens right before your eyes, and you’ve got a cold, delicious beer to take with you. So in summertime, my advice is to grab a couple cans and head to the Canal Saint-Martin!

This next spot on the top 5 microbreweries in Paris has the best location of them all. At Paname, you can sip a tasty craft beer overlooking the water. No matter the city you’re in, it doesn’t get much better than that!

Paname Brewing Co. is situated right on the banks of Bassin de la Vilette in Paris’ hip 19th arrondissement. This area has been undergoing a lot of changes over the past few years. And we’re seeing a ton more experimental food and drink spots pop up around La Villette!

This artisanal Parisian brewery has been around since 2015 and has become a huge hit in the French capital. And it’s easy to see why! All the beers are brewed on site, and the brewers at Paname have found the perfect balance between experimental flavors and seasoned classics. Paname proposes 5 house brewed beers on rotation, including everything from red ales, to black IPA’s and pre-prohibition style lagers. Plus, they offer a pretty solid food menu, with everything from pizza, to steaks and brewery classics like fries.

So do what the locals do, and head to Paname Brewing Co. to enjoy a tasty brew and a cool view.

Bonus fun fact: “Paname” is actually old Parisian slang word for “Paris” coined in the early 20th century. Since then, many locals have been lovingly referring to their city as Paname. 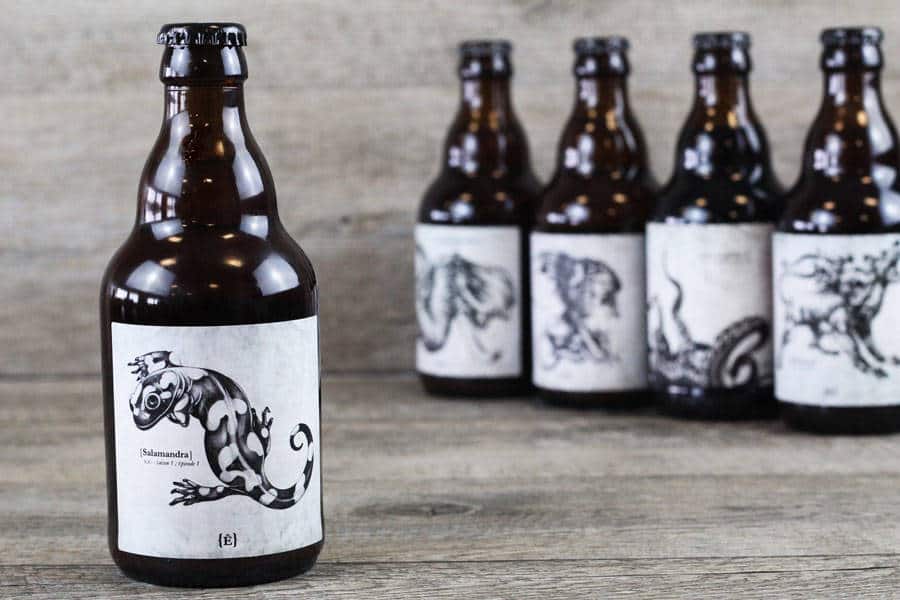 Last, but certainly not least on my top 5 microbreweries in Paris is Brasserie de l’Être. This microbrewery is also located in the 19th arrondissement and it’s within walking distance of Bassin de la Villette. Brasserie de l’Être really puts the “micro” in microbrewery. They manage to produce some of the best beer in Paris in a tiny space. There’s actually not even seating inside the brewery, because nearly all the space is used for beer making equipment!

But don’t worry, you can head right next door to the taproom Ah! la Pompe à Bière to sample the goods. They have three beers on tap, which are all brewed just meters away. For summer, there’s a lager, an IPA as well as  Belgian-style Triple on tap. All of which are worth trying. Bottled beers are also for sale, perfect for a picnic later on.

Well I hope you’re thirsty, because these are the best microbreweries in the Paris to grab a pint! So cheers, or santé as we say in France!

Tip: If you’re trying to be more environmentally-friendly (aren’t we all?) you can purchase growlers at these breweries and bring them back for refills. You’ll get a discount on beer and reduce waste. Win-win, right?!