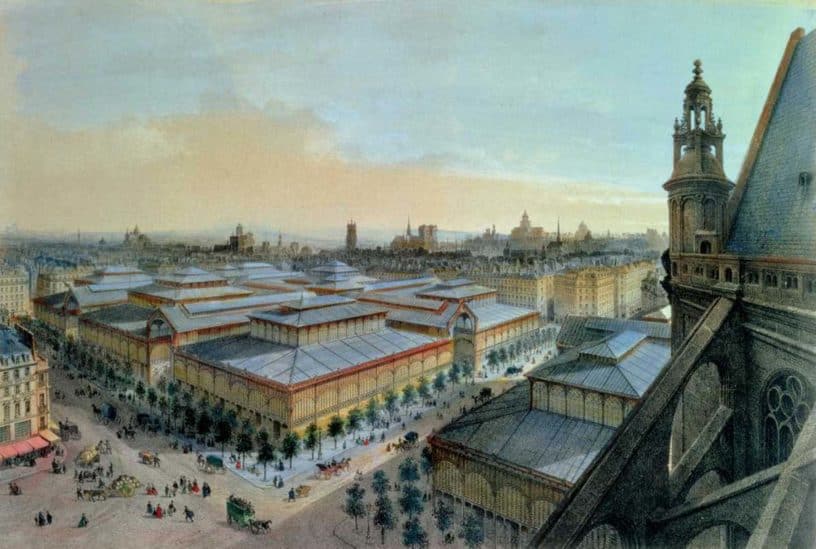 Located in the right bank of Paris, you will find Les Halles! This modern neighborhood is found right in the centre of Paris. In this article, I will introduce you to this amazing place where locals love to gather! From shopping, grocery shopping to hanging out in cafés, Les Halles are everything you need to spend an awesome day in Paris. Many of Paris hidden gems are found in Les Halles area.

If you’re interested in Les Halles and want to know why it is considered to be the heart of Paris by many locals, read on and find out 5 interesting facts about Les Halles! Its history began during the twelth century, so there’s a lot to discover and learn about it! 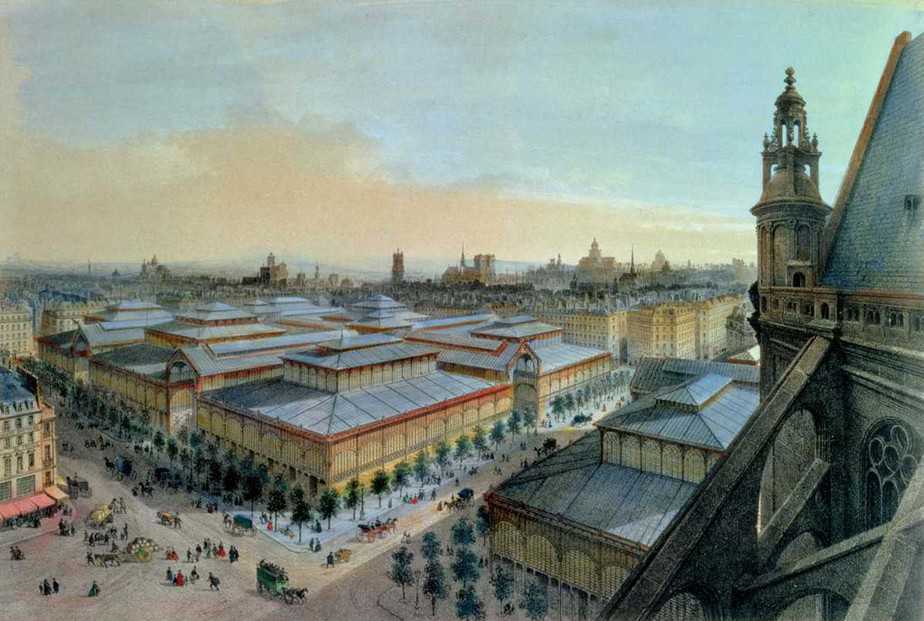 During the twelth century, a Royal Decree established there the great market of the capital. But the area was not appropriate for a market, since the city was evolving very quickly. It was only during the nineteenth century that the Halles de Baltard were born! Les Halles de Baltard were twelve pavilions of an avant-garde architecture, made of cast iron and glass. This change happened in 1870. These pavilions stayed up for one hundred years. Each of them has a speciality, such as fish, vegetables, meat, while many other market stalls overflew the streets.

The hygiene of the area was terrible and there was not much room. So, in 1969, the Halles de Baltard were moved to the town of Rungis and the pavilions were destroyed. This demolition deeply saddened the locals that lived in the neighborhood. For about ten years, there was a big hole right in the middle of it. Until, a new project emerged in 1979: the Forum des Halles. The Forum lasted for 47 years. 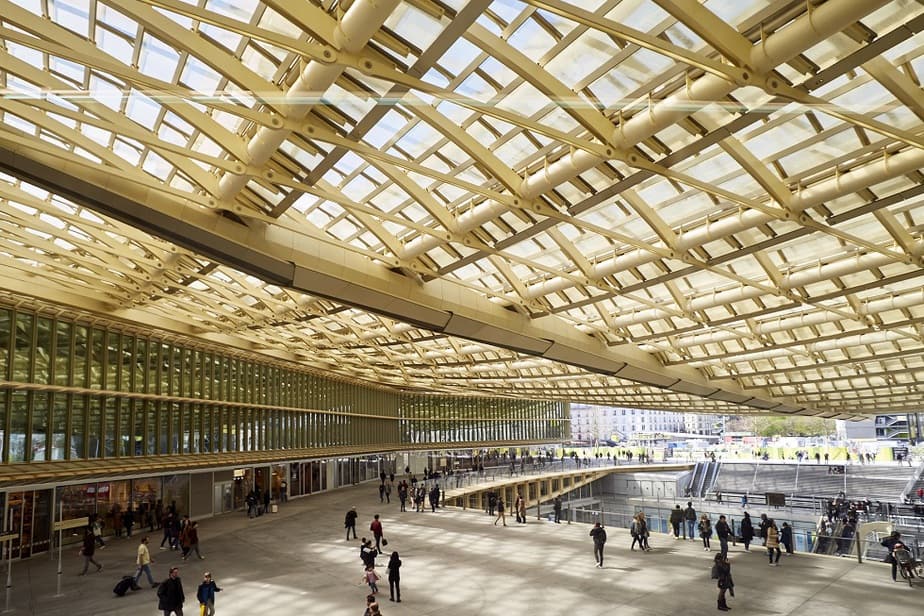 In 2010, Les Halles were once again redesigned and redevelopped to suit the modernization of the city, with its popular Canopée. 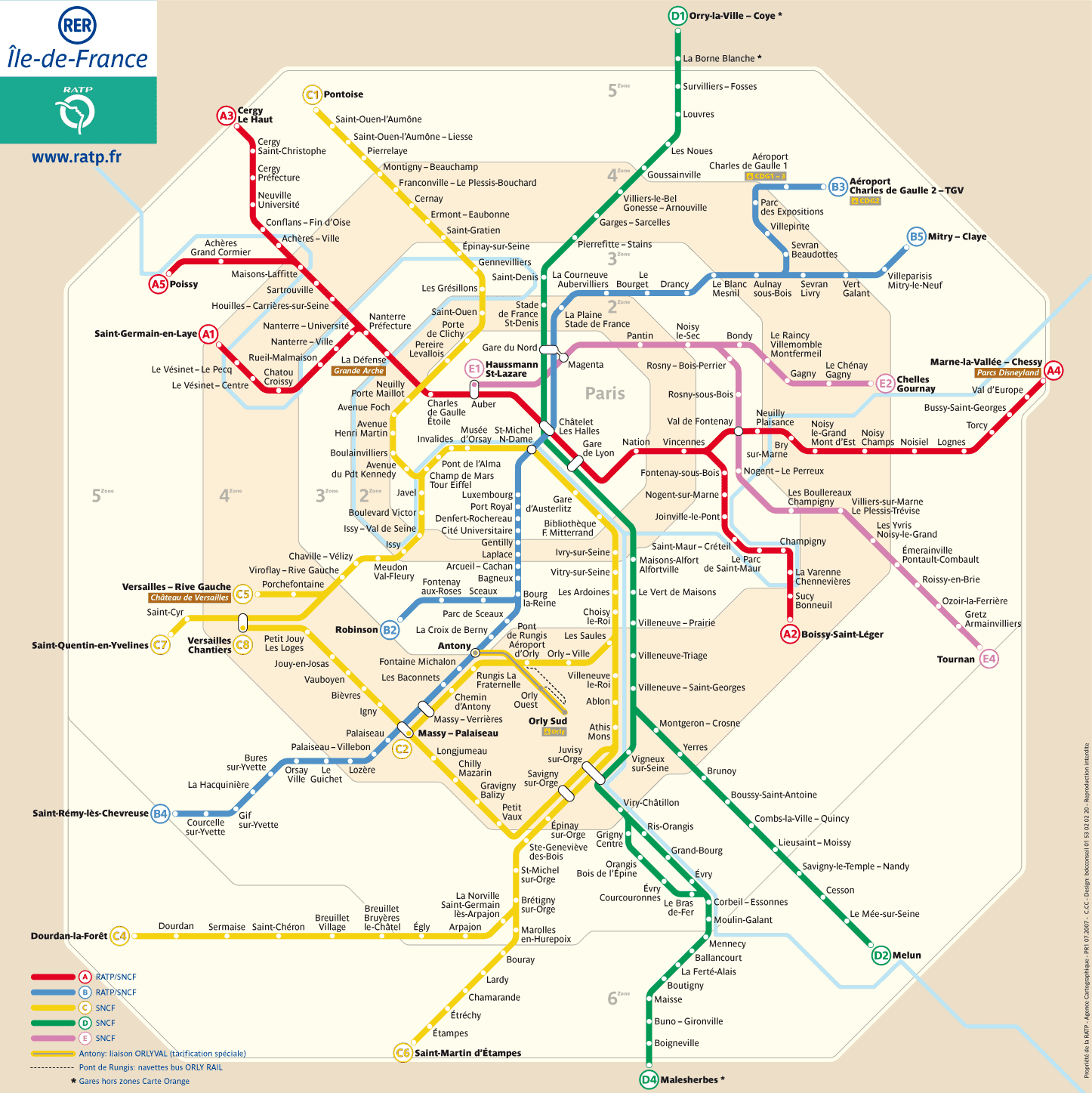 Les Halles is the largest underground train station of Europe! It has three RER lines, which is the Regional Express Network. Its rapid trains connect you to Paris and its suburbs. For instance, you can get to Disneyland by taking the RER in Les Halles station.

Plus, in Les Halles, you will also find five metro lines: 1, 4, 7, 11, and 14. The metro line nº1 will take you to most of the greatest Paris landmarks. In my opinion, if you happen to get lost while in Paris, you can always try to reach Les Halles. This is where you’ll find the different lines that will get you to your flat, hotel or choice of destination. 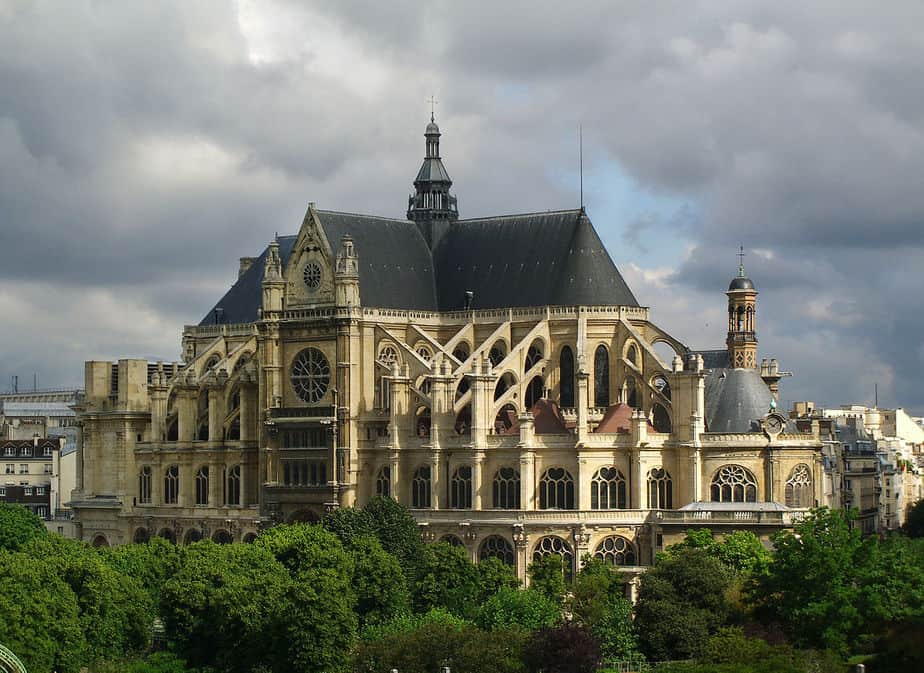 As you walk up the escalators of Les Halles, you will stumble upon one of the greatest churches of Paris. I couldn’t talk about Les Halles without mentioning the Église Saint Eustache!

It is one of the biggest churches of Paris! Paris has plenty of chapels and churches, but apart from the Notre Dame Cathedral, the city did not have large churches. This is why the Saint Eustache Church was built. It is 88 meters long, more than forty meters large and an arch of 33 meters.

It was the King François I that laid the first stone. He wanted to build a church that was able to compete with Notre Dame. The Saint Eustache is one of the last Gothic churches, but it also has Renaissance details. Some Parisians consider it to be the greatest church of Paris.

Due to its close location to the Louvre, it became the Royal parish. The Cardinal Richelieu was baptized in Saint Eustache. The King Louis XIV did his first communion there. Jean-Baptiste Lully got married in this church. And Colbert’s tomb is found there.

While Notre Dame is the national church, the church dedicated to big ceremonies (such as coronations), the Saint Eustache is the church of the Parisians! 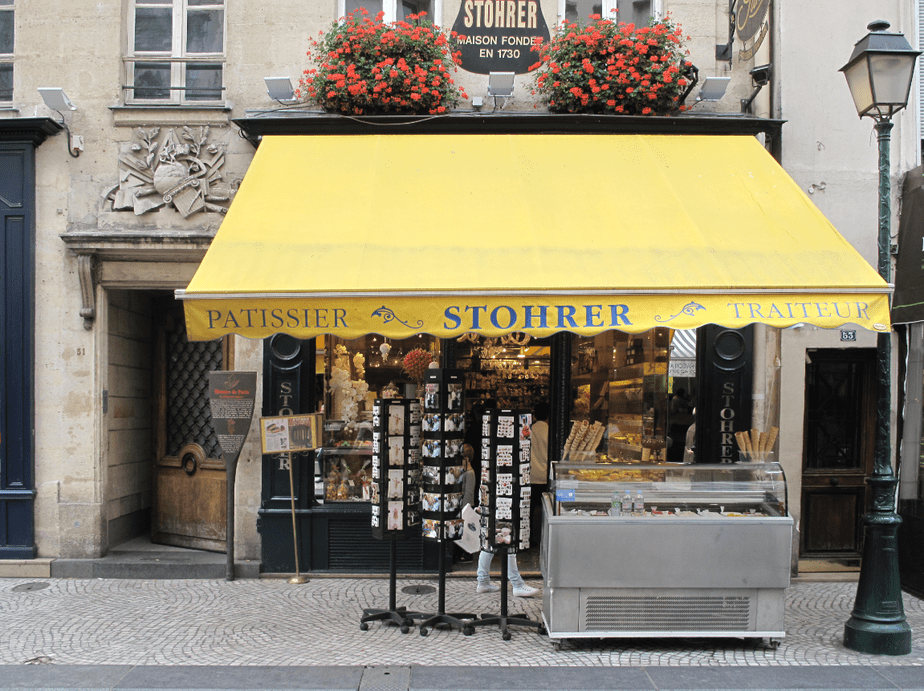 Les Halles definitely brought life to the neighborhood! In the streets around Les Halles, you will find many buildings and institutions that are centuries old!

In the lovely street of Montorgueil, just a few steps from Les Halles, you will find the famous Stohrer. The decorations of the bakery are from the eighteenth century, designed by Paul Baudry who also designed the decorations for the Opéra Garnier, and are now classified as historical. Nicolas Stohrer was the baker of the King. But, while the King was living in Versailles, he still decided to open his bakery on Rue Montorgueil. He opened its doors in 1730. Why did he choose to settle there?

At that time, the Rue Montorgueil attracted an upper class clientele. People used to come there to buy fish and seafood, and not everyone could afford to buy seafood. Nicolas Stohrer chose to establish his bakery on this street, because he knew his clients would be able to afford his cakes.

While at Stohrer, you can try the Puit d’amour pastry, which was Louis XV’s favorite one! And also the Alibaba, which was the favorite of his father-in-law, the King Stanislas.

Fact nº5: There was a cemetery 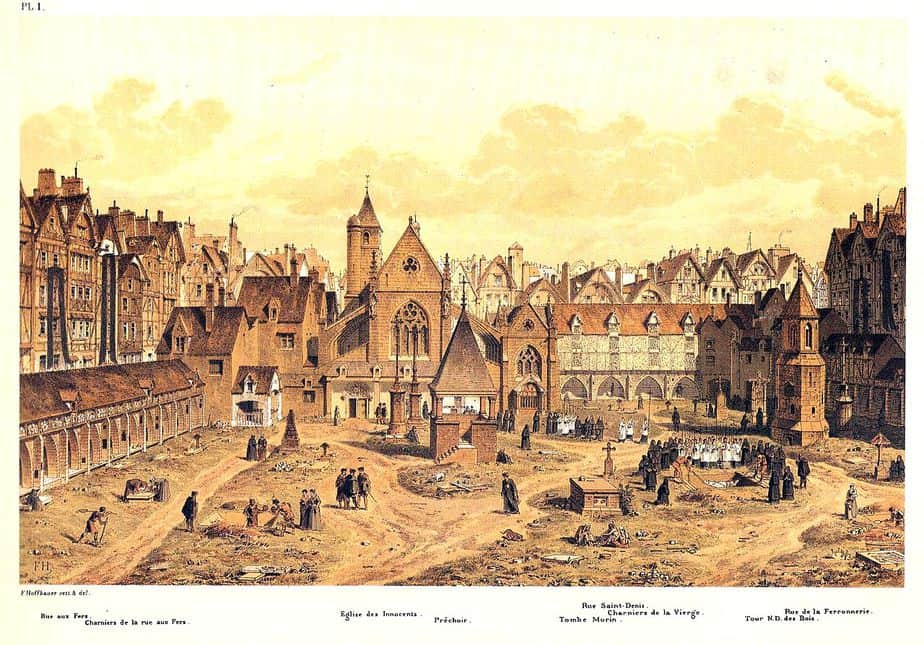 For about eight centuries, corpses were piled up near Les Halles. More than six millions bodies were in the Cemetery of the Innocents – Cimetière des Innocents, in French.

This cemetery was located outside of Paris, because the centre of the city was in the City Island. As the city of Paris grew, the Cimetière des Innocents ended up being right in its centre. In 1780, the cemetery was closed for public health reasons. A market of flowers, fruits and vegetables was settled there instead.

If you’re wondering where did they move all the bodies, you will have to go to the Paris Catacombs. This is where all the skeletons were transferred to. It is a very interesting place and you will end up learning a lot about the city than you would have expected!

My top 5 interesting facts about Les Halles is now over! I hope you’ve enjoyed it and that it has inspired you. While in Paris, you definitely should walk around this area, because it is actually very close to the main landmarks of the city and you will also get to explore the places locals love! Its central location is a great asset, so seize the opportunity and also discover its surrounding areas. I hope to see you soon in one of our tours!