The Montparnasse Tower or la Tour Montparnasse is easily one of the most distinguishable buildings in Paris. Which is saying a lot for a city that’s home to architectural wonders such as the Eiffel Tower and Notre-Dame.

So just what is it that makes the Tour Montparnasse such a unique part of the Parisian horizon? Read on to discover some unexpected facts and of course a little history in my top 5 fun facts about the Montparnasse Tower!

The tower’s location near the Montparnasse train station means it borders three different arrondissements; the 6th, the 14th and the 15th. The neighborhoods change vastly in just a couple of blocks, from business to residential and from upscale to popular; all with classic architecture.

So the tower has no problem standing out, it’s the only skyscraper in Paris. This is because the city’s other skyscrapers are located outside the city limits, in a business district called La Défense.

As you can probably imagine, Ever since its construction in 1973, the Tour Montparnasse has been regarded by locals as a humongous eyesore. Visitors alike remark on the tower, often asking why the city would allow such a monstrosity to be built.

Well, the answer this question begins in 1959 at the adjacent train station. The French rail company, SNCF decided that the Montparnasse station needed to be renovated, and moved to accommodate the growing influx of passengers. So much to Paris’ dismay, the Gare Montparnasse was moved to its current location and the 59-storey tower was built next door to house Parisian office buildings.

2. La Tour Montparnasse is the Second Tallest Skyscraper in France

By Paul Gauldriault on Unsplash

In 2011 however, the massive Tour First was remodeled adding to its height and surpassing the Montparnasse Tower as the tallest in the country. Located just outside Paris in La Défense business district, the Tour First stands 231 meters (or 757 feet) tall. Although it’s just 21 meters taller than Montparnasse, that was enough to land it the title of tallest skyscraper in France.

3. It’s the Oldest Skyscraper in Paris 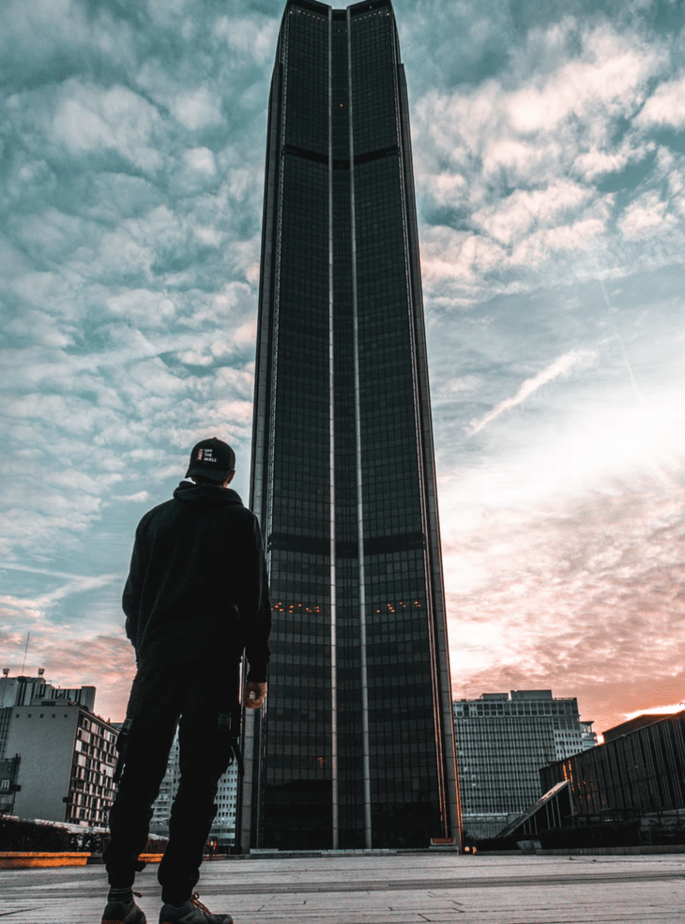 By Felix Meynet on Unsplash

Most people are surprised to learn that Montparnasse is actually the oldest (and only) skyscraper in Paris. But actually, it’s not as old as you may think. The construction of Montparnasse Tower started back in 1969 and lasted until 1973. Before that time, there weren’t any buildings taller than seven storeys in Paris.

As you can imagine, locals were less than happy to witness the tower’s inauguration. So unhappy in fact, that the city of Paris passed a law banning further buildings over 7 storeys tall in Paris.

Since then, the city has updated the rules in certain business districts and commercial neighborhoods; to allow for some slightly taller buildings. These areas, such as parts of the 12th and 13th arrondissements, and the 15th near Beaugrenelle all feature some high(er) rises, but nothing compared to the Montparnasse Tower!

4. There’s a Restaurant on Top

Photo by The Ciel de Paris – Uploaded by them

You may have already known that Montparnasse Tower is the tallest skyscraper in Paris, but did you know there’s a restaurant on top?

Yes, that’s right you can enjoy a meal overlooking Paris! Ciel de Paris is a full-service, fine dining restaurant located on the 56th floor. Situated high above Paris, the restaurant provides 360° vistas of the city and all its monuments. Sit down to dinner and watch the Eiffel Tower sparkle below. You’ll have dinner and a show indeed.

The menu is relatively small and filled with classic French dishes such as foie gras and blanquette de veau. There’s also some vegetarian options and a full bar. Ciel de Paris offers set formulas or you can order à la carte. But as usual, the set formula is more affordable and will save you some Euros.

5. Montparnasse Tower Has the Best View in Paris

By Simon Infanger on Unsplash

The Tour Montparnasse isn’t all bad, and lots of Parisians have come to appreciate it. And if I may say so, this is mostly because the tower offers the most spectacular view of Paris. You’ll find the observation deck on the 59th floor, offering unmatched panoramic views of the city.

While the Eiffel Tower, Arc de Triomphe and the Sacré-Coeur, provide a great view, you can’t escape the giant Montparnasse Tower in the distance. Ironically, Montparnasse provides the best view because it’s the only vantage point in the city where you don’t see the tower itself.

From 59 storeys above ground, you can admire the Eiffel Tower, Montmartre, the Louvre, Invalides and even see beyond Paris. Montparnase Tower has visibility for 40km, meaning you can often see planes taking off and landing at Orly airport from the observation deck!

One of the things I love about visiting the Montparnasse Tower is that you can plan your visit in advance. For example if you want to watch the sunset from the top, simply reserve a ticket for the time slot you want. Just know that this is one of the most popular times, so try to book in advance if you can!

Well know you know the top 5 fun facts about the Montparnasse Tower! I hope you’ll take the time to discover this place for yourself. Or at the very least, enjoy the impeccable view from the top.