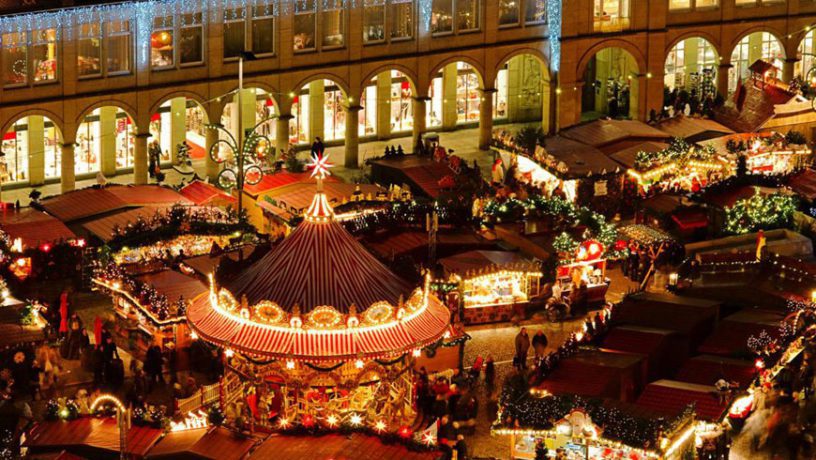 When the air gets cold and smells like hazelnuts and the days are shorter, then you know that Christmas is coming to Barcelona! No matter if you are religious or not, no matter if you simply like going out and buying stuff (or you simply need to run away from the never-ending New Year’s reunions, parties, meetings with relatives), Christmas Markets are there for your benefit. They are a part of the tradition of the city and something worth visiting.

So, come with, take my hand, and let me show you the Top Five Christmas Markets in Barcelona.

The first of our Top Five Christmas Markets in Barcelona is also the newest. This market, located in Portal de la Pau, next to Christopher Colombus’ Statue, is part of the Port of Barcelona’s 15Oth anniversary celebrations.

It has wooden market stalls, decorated with traditional Christmas tinsels which sell crafts and presents. For those who cannot stand the cold air without eating, there are lots of food trucks with traditional Spanish food.

Shopping is not your thing? You do not need to worry! The market also has a stage and lots of musical and theatrical shows!  But none of these is yet the biggest surprise of our first choice, as you will see. What if I tell you that there is a 31-metre-high Christmas Tree and an amazing floating nativity scene? Make sure you don’t miss this one, from early December to early January. 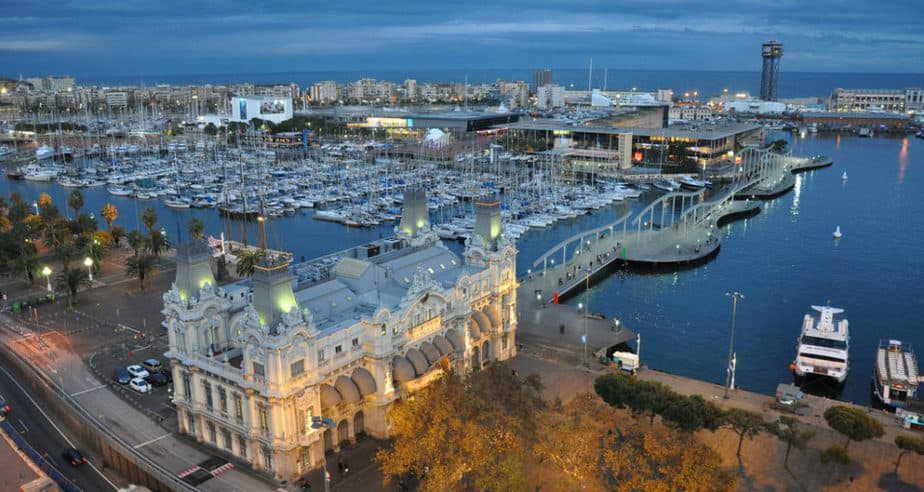 Second in our list of the Top Five Christmas Markets in Barcelona, appears the well known Fira de Santa Llucia, set next to Barcelona’s Cathedral.

It is a market with quite a long story which started in1786 (wow!), and is the oldest Christmas market in the country.  Santa Llucia is such a traditional place that it is always crowded and visited by thousands of tourists.

Santa Llucia Christmas Market is the best place to have a look at the most typical traditional Catalan Christmas traditions: the surprising caga Tio and the Caganer. 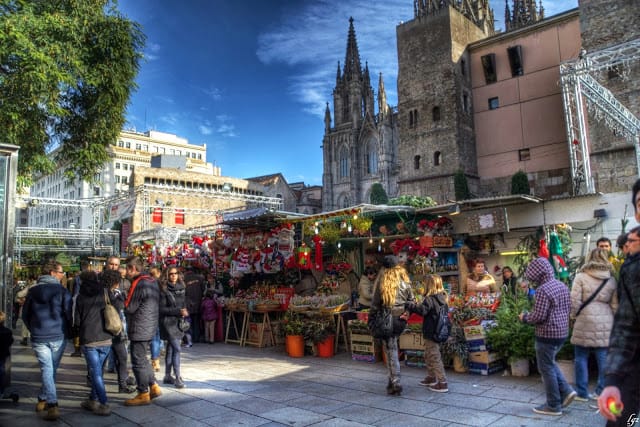 Who can be indifferent to art when standing in front of Barcelona’s most famous artist Antonio Gaudi works? I hope no one. So, yes, considering its location, la Fira Sagrada Familia should be the top of our Top Five Christmas Markets in Barcelona.

Created in 1962 as a prolongation of Santa Llucia’s, this is nowadays the most traditional Christmas Market in the zone of the city known as Eixample. It is set in Sagrada Familia Square and divided in four sections where you can buy trees and plants, nativity scenes (pesebres), traditional figures, food, sweets, presents, crafts and even jewelry and clothes from the end of November to the end of December. 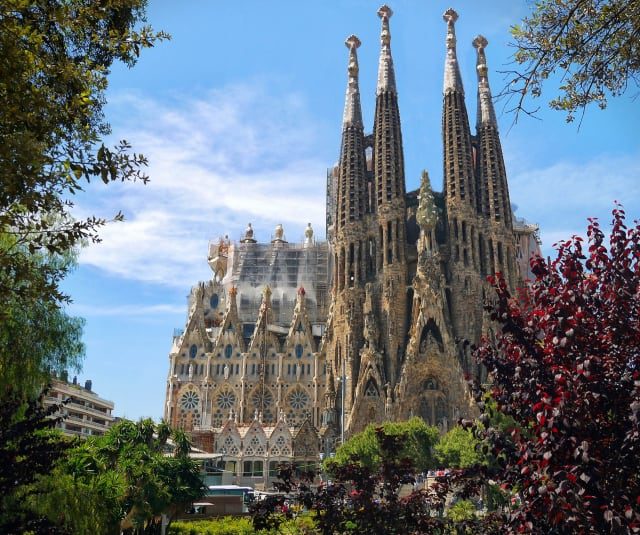 There was a time when Father Christmas was not even known in Spain and the Epiphany, or Three Kings Day, celebrated on the 6th of January, was the most important and traditional Christmas event in all the Hispanic world. Things have changed much since then, but yet, on the Epiphany Day Hispanic kids receive presents (if there is no tangible proof of misbehavior) from the Three Wise Men from the East, who are thus as appreciated by the young ones as Santa. This makes the Three Kings Market one of our Top Five Christmas Markets in Barcelona, for sure.

The market was created in 1877 as a toy market where the young Catalan kids  could choose the gifts that they “ordered” later, in a well written and presented letter that the kings themselves read. Nowadays, the market’s tinsels are located on both sideways of Gran Vía, one of the city’s main avenues, where the dozens of chariots of the King’s Parade greet and offer candies  the thousands of local kids on January the 6th.

Poble Espanyol (Spanish Town) is an open-air architectural museum located in Montjuic, a few meters from the Magic Fountains. It is a museum that offers contemporary art, architecture, crafts and food. The enclosure is made up of 177 real-scale buildings from all Spain, and makes up a town with its streets, squares, houses, schools and shops.

From the 6th to the 8th of December, Poble Espanyol celebrates the magic of Christmas with an incredible market which deserves to be one of our Top Five Christmas Markets. During those three days visitors will enjoy of tastes of wines and handcrafted beers, traditional Spanish food (paella, yeah!), live music and theatre, Christmas inspired films and Christmas Carols.

If you have got children, or like kids, or even if you feel like one yourself, Poble Español will be twice the fun! Poble Espanyol offers them a living nativity scene, storytellers, and a giant snowball where you can take crazy pictures!

Of course, Santa Claus will visit Poble Español too, and more than once, and will personally receive all the children’s letters. Don’t miss the Forest of Desires, where you can hang your Christmas wishes even if you are too old (or too naughty) to receive presents from good old Santa Claus.

So far, we have reached now the end of our great visit to the Top Five Christmas markets in the marvelous city of Barcelona. Each one is a lovely place to visit, full of wonder and magic for you and your family.

If you have enjoyed this article, follow us on Facebook for more recommendations. Have a nice day out and enjoy this holidays! Hohoho! See you soon! Fins ara! Hasta pronto!