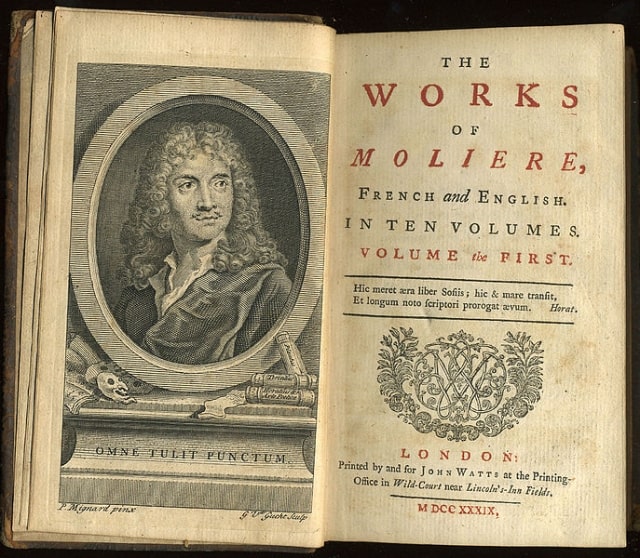 Frontispiece and title page from the first volume of Molière's works translated into English printed by John Watts 1739 from the Private Collection of S. Whitehead - WikiCommons

If you’re familiar with French theatre, you’ve definitely heard of Molière! Born Jean-Baptiste Poquelin, Molière was the French playwright’s stage name. In addition to writing plays, he also wrote poems and was a performer himself. He lived and worked in Paris during the second half of the 17th century, and is widely considered one of the greatest French writers of all time.

Molière wrote everything from comedies to dramas, to satire. His plays have been (and continue to be today) performed at the legendary Comédie-Française in Paris more times than any other playwright, ever. French is even sometimes called, “the language of Molière,” to give you an idea of how influential this guy was!

After years of training, and a close friendship with Philippe I, Duke of Orléans, otherwise known as the king’s brother, Molière got the chance to perform for King Louis XIV at the Louvre (before it was a museum, the Louvre was a palace!). The king was smitten, and Molière was granted the use of several theatres in Paris.

He continually awed audiences with his work until his death at the young age of 51. Molière experienced a coughing fit brought on by his tuberculosis while on stage. In a reflection of his hard work and dedication, he finished the performance before he collapsed and died a few hours later.

Molière boasts an extensive body of work, so you may no be sure where to get started. I suggest that you stick with his plays to begin so that you can get a better idea of his style and his overall ideas. If you still need some help, keep reading for the top 5 best plays by Molière! 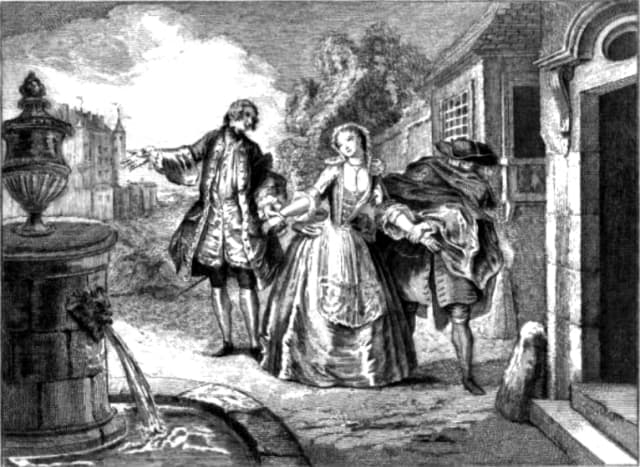 First up on my list is a comedy! Several critics consider The School for Wives, or, L’École des femmes, to be one of the best plays Molière ever wrote. The first time the play was performed, it was at the Palais Royale theatre in Paris for Philippe I.

The play tells the story of a man named Arnolphe who is so scared of women that he decides to marry his young and naïve girl named Agnes that has been in his care since she was a child. Arnolphe is obsessed with essentially grooming the young girl to be his ever-faithful bride. But, in the end, Agnes falls in love with another man, to the chagrin of Arnolphe. I’ll let you read the play to find out the end! 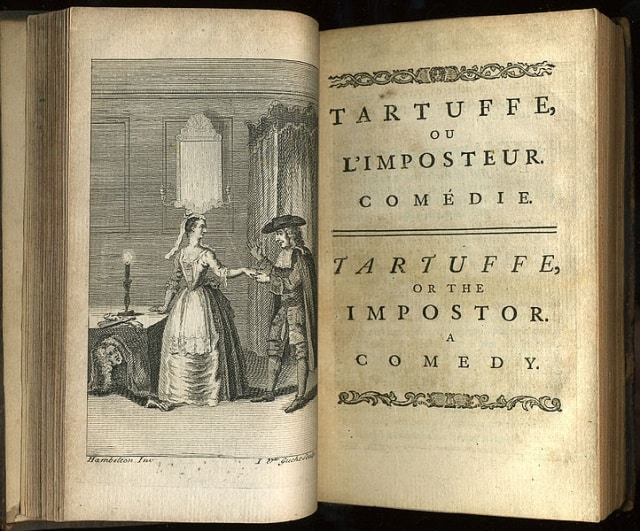 Frontispiece and title page of Tartuffe or The Imposter from a 1739 collected edition of his works in French and English, printed by John Watts from the Private Collection of S. Whitehead – WikiCommons

The three main characters are Tartuffe, Elmire, and Orgon. Tartuffe is a charlatan who pretends to be pious in order to gain control over Orgon and his mother. Although Tartuffe has managed to dup them, the rest of the characters in the play can see past his act. Then, Tartuffe attempts to seduce Elmire, Orgon’s wife. The rest…I’ll let you read for yourself!

Almost directly after the play was performed for the first time in 1664, it was surpassed by King Louis XIV. The play directly pokes fun at the Catholic Church, and the king was a very religious man. 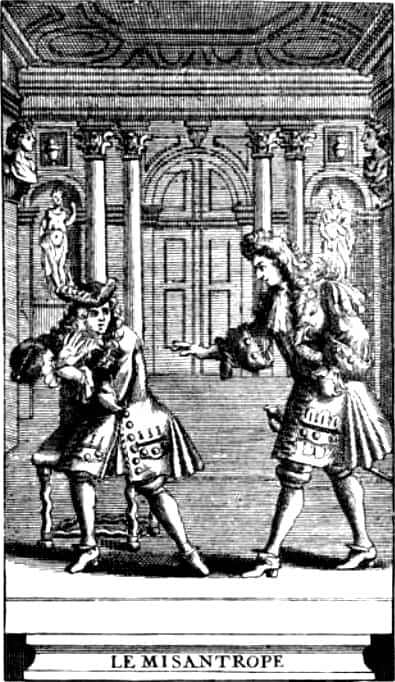 Another comedy on my list of the top 5 best plays by Molière! The Misanthrope, or, Le Misanthrope ou L’Atrabilaire amoureux, is a satirical criticism of the French aristocrats at the time. However, what makes this play so much better than others of the same genre performed around the same time, is that the characters are fully developed. Other satires featured extremely flat and underdeveloped characters, making them more difficult to relate to.

The Misanthrope is Molière’s best-known play, but it has also received a lot of criticism. In particular, the French philosopher and writer Jean-Jacques Rousseau complained that the main character should be treated as a hero rather than as a fool, as Molière wrote it. Pick up a copy of your own to meet the characters for yourself! 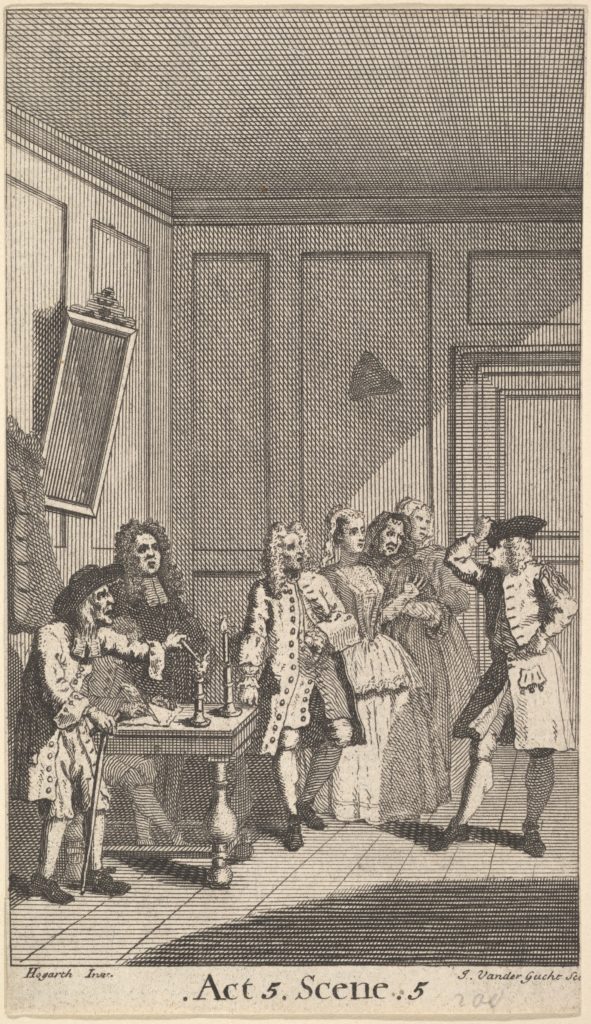 Frontispiece to Molière’s L’Avare, (The Miser) by William Hogarth – WikiCommons

I hope you’re not sick of laughing, because The Miser, or, L’Avare is another comedy by Molière! If you haven’t been able to tell by now, although he did dabble in other genres, comedies were really Molière’s forte. I personally find The Miser to be Molière’s funniest play, and I think you will too!

The Miser tells the story of a stingy man that hopes to steal his son’s lover away from him. If you’re not already hooked, there are plenty of other complications that arise in hilarious ways which will keep you laughing. 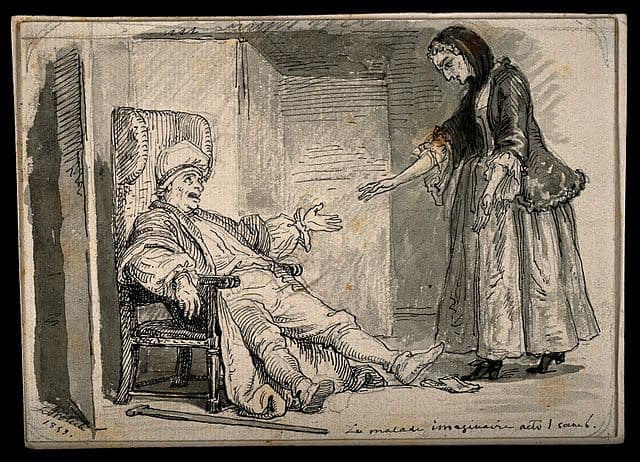 Argan, the hypochondriac, complaining of his ailments to his nurse by Lorens Frölich – WikiCommons

You caught me: all of the plays on my list are comedies! Except for this time, The Hypochondriac, or, Le Malade imaginaire, is a comedy ballet. This one goes out to all of my dance lovers!

The Hypochondriac focuses on a man named Argan, a hypochondriac. He is so overly worried about his health that he gets taken advantage of by several crooked French doctors until one of them tells him that he only has 6 months to live. I won’t spoil the ending for this one, either!

This is also the play that I mentioned when I touched on Molière’s death. He was able to perform four times as Argan until he died after one of the performances.

Pick up these 5 plays by Molière and you’ll enjoy a great introduction to his work! There are several others that you should also read once you’ve finished with these, such as The Bourgeois Gentleman, The Doctor in Spite of Himself, and Don Juan!

If you’re in Paris I strongly encourage you to visit the Comédie-Française to see one of these plays for yourself! And, if you’d like to learn more about Molière and other French personalities, join one of our walking tours. Our local guides are sure to know even more fun facts to fill you in on! Click here to learn more and make a booking.