The Latin Quarter got its name thanks to the university that has been part of this district for centuries. Back in the day, Latin was the most widely taught and spoken language within facilities of higher education.

This neighborhood on the Left Bank remains a student town and thus the Latin Quarter was born. 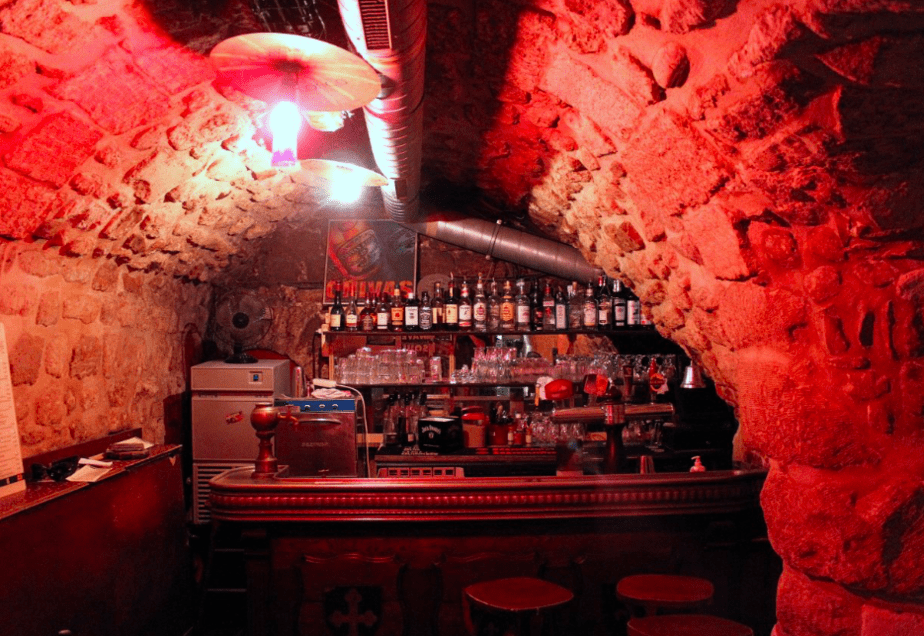 Being a student town, quality nightlife is of the utmost importance. Good music, affordable booze and intelligent conversation are three very valued elements that make up the after-hours spaces in this area.

Bar culture is superior to club culture in the Latin Quarter, those looking for dance clubs are better off heading over the Seine and into le Marais where clubbing is more popular.

Here are five unmissable bar experiences for your time in the LQ.

The Caveau de la Huchette is situated right on the edge of the Seine as you cross over onto the Left Bank from Notre Dame, using the Pont des Coeurs.

The building dates way back to the 16th century, its a wonder that it is still standing this close to the center of town. Inside there is a small cave-like space that has been home to the Huchette jazz bar since 1949. 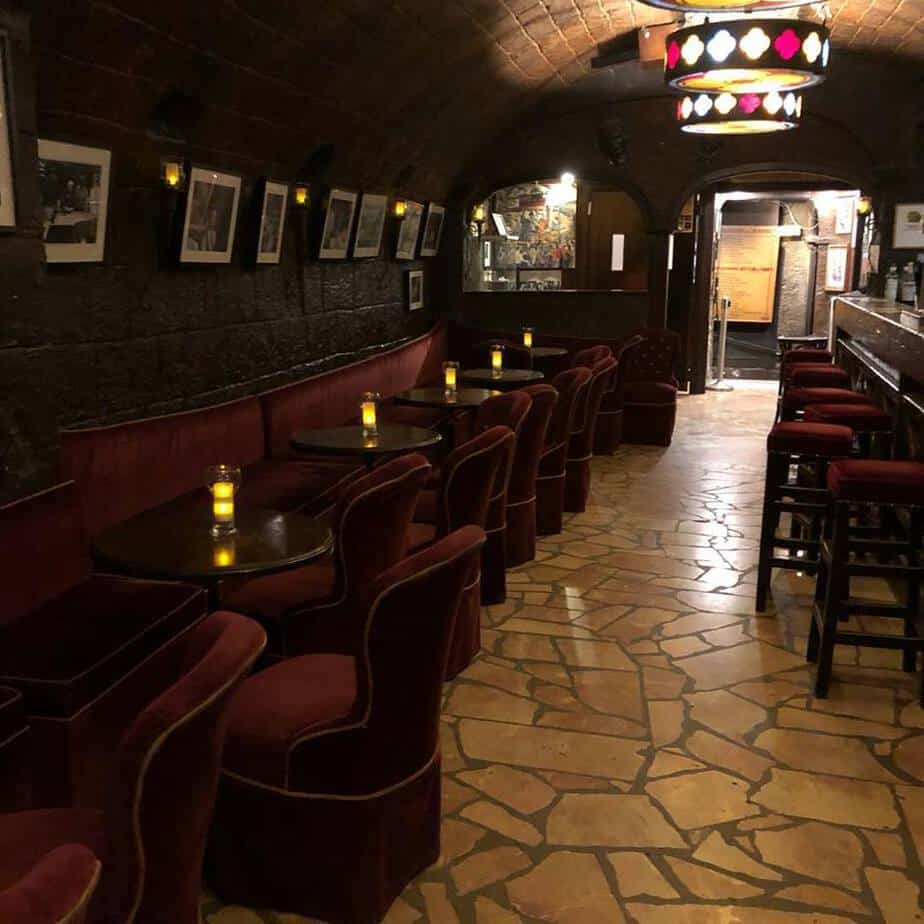 Every evening at around 9:30pm the cellar is opened to guests and the jazz performances commence. You’ll sip on wines and whiskeys of your choice.

The ambiance is phenomenal. The performances usually focus on 1920s jazz and dressing up is encouraged if you happened to remember your flapper dress when you packed! There is a €10 entrance fee which goes toward contribution for the performers.

After the jazz, le Caveau de la Huchette puts on additional live swing and rock shows that run into the early hours of the morning.

Every evening, aside from Sundays, le Piano Vache invites patrons inside for an evening of live music and cheap drinks.

It is a favorite amongst both the students and residents of the Latin Quarter. The crowd is always a well balanced mix of both young and old. 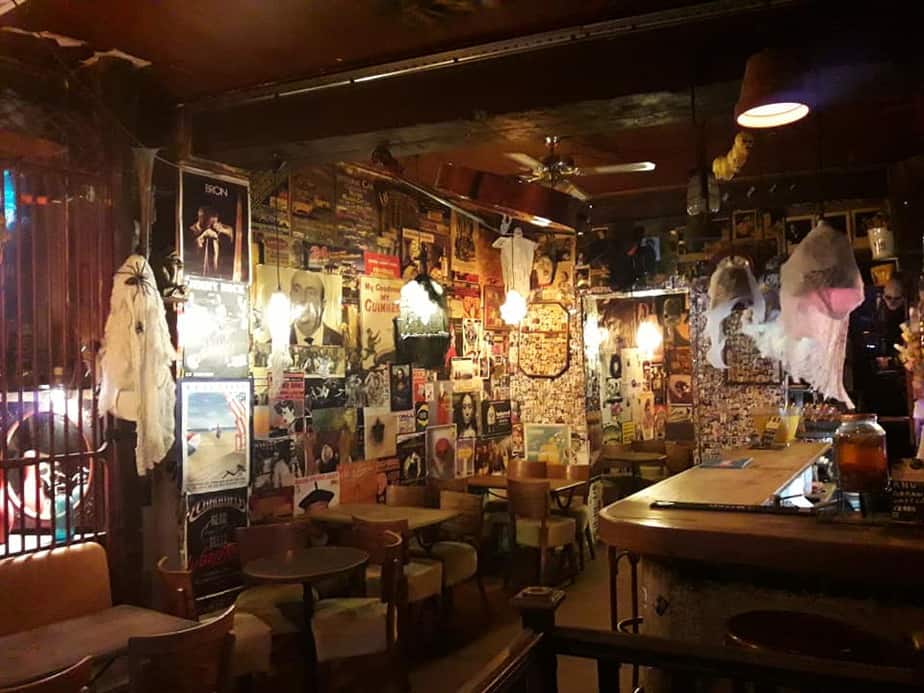 The performances are mostly jazz, blues and classic rock. Customers in le Piano Vache drink beer on tap and converse in low tones so as to not drown out the performers.

Monday evenings are reserved strictly for jazz. The music begins at 9:30 sharp and there is no cover charge. You’ll have to get there early if you want to get a seat, otherwise you’ll have to swipe one during the musician breaks.

3. Castor Club in the Latin Quarter

Nor far from the famous Shakespeare and Company bookstore is this classy little joint known as the Castor Club.

Most places in the Latin Quarter allow for people to drift in and out in whatever attire they’ve been wearing from a full day of excursions. It’s not uncommon to head for a drink in the LQ after a free guided walking tour through le Marais or the surrounding neighborhoods. 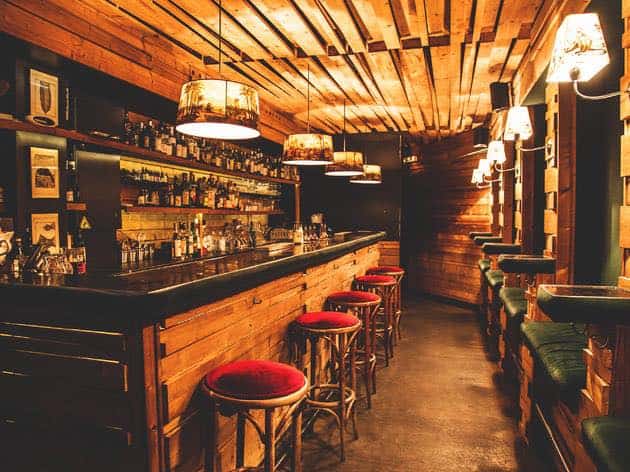 This bar, however, values self preservation and you’ll want to put some effort into your night out here. It’s got the feel of a up-market Parisian speakeasy.

Crafted cocktails are the menu headliner here and the mixologists are very, very good. They’ll set you back a hefty €14 per drink, non-alcoholic cocktails will cost €9.

Dancing in the bar is encouraged. The genre of music depends on the night; sometimes 80s, sometimes country, sometimes even house. Luck of the day!

The Caveau des Oubliettes hosts nightly jazz performances off of a little stage in the back of the cave. There is no entrance fee for the performances but all customers are expected to purchase a drink upon arrival. Ratio is one drink per seat minimum. 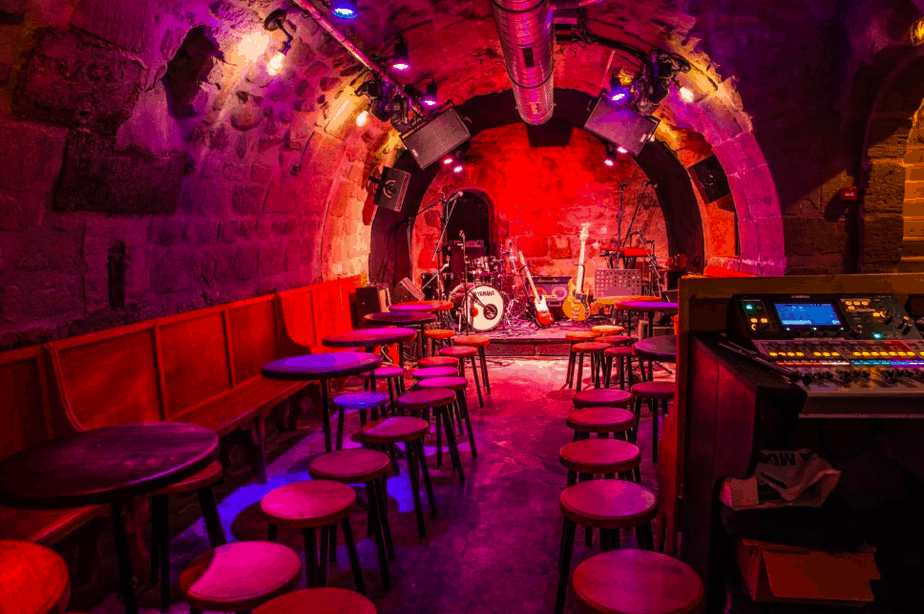 Performances here range between English, French, Portuguese and occasionally Spanish. It’s a great way of involving everyone in the music.

The bar doesn’t open on Mondays, but the rest of the week they are usually open until 3am. When the bars in le Marais start to close up at 2, simply cross over the river and find your way here instead!

Dress is smart-casual; nothing too fancy but effort is appreciated.

The pub is open daily. It is loved by the locals of the Latin Quarter because it is open until 5am on Fridays and Saturdays, however it is usually only the locals who know this.

During happy hour you’ll enjoy beers for around €5. Cocktails during this hour are more reasonably priced too, regular prices can be seen as steep considering this is a student town. 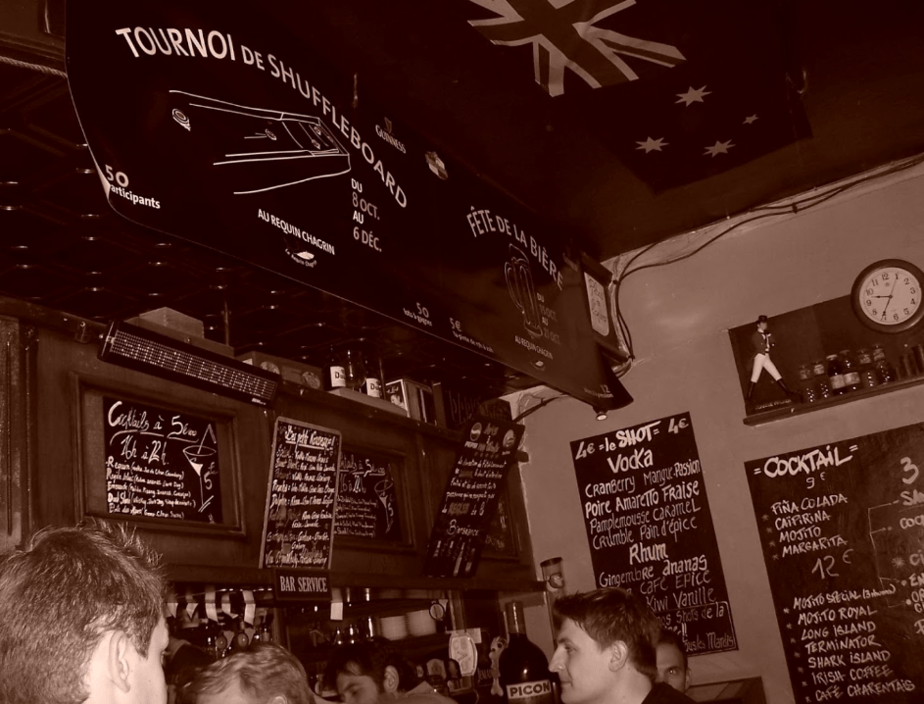 Le Requin Chagrin is a popular spot for after work drinks for the locals of the Left Bank. There’s not a night of the week where there isn’t a vibe in this pub; good music, exciting conversation and new acquaintances being made.

They open door policy allows you to “come as you are”, whether you’re dressed for a night on the town or you’ve been walking Paris all day and it shows, you’re welcome in le Requin Chagrin.