Paris - Activities & things to do, Paris - Neighborhoods and where to stay, Paris - Our top 10 lists 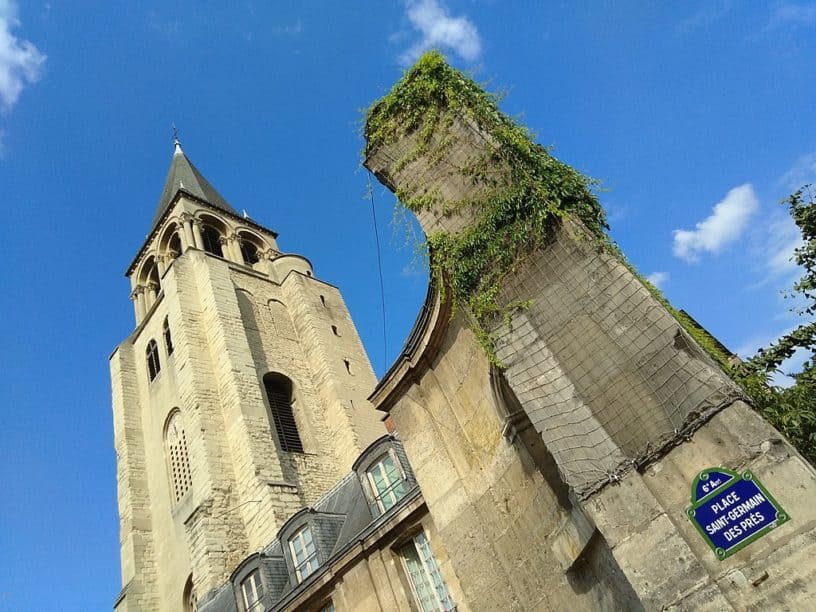 In Paris, we have world renowned landmarks such as the Louvre, the Eiffel Tower, the Arc de Triomphe, or Notre-Dame. We also have neighborhoods from which stem very specific atmospheres such as Le Marais, or Montmartre… And then, we have Saint Germain.

Located right between the student Latin Quarter and the luxurious 7th Arrondissement, Saint-Germain-des-Prés has now turned into a must-see area.

Before naming ten things that you should see there, here is a bit of information about Saint-Germain.

From the Prayers to the Arts

When you walk the streets of Paris, it is hard to remember that the city was small and contained, for most of its 2000-year history. In fact, the Left-Bank of the Seine developed much more slowly than the Right-Bank, because, outside the city walls, many lands belonged to the Clergy, to abbeys, churches, convents and parishes. In the Middle-Ages, these were almost as powerful as some lords, and their lands were respectfully preserved.

The Abbey first appeared in the 6th century and it gradually grew through the Middle-Ages. It was located right outside the city walls, and a small village, Saint-Germain-des-Prés, formed around the fortified lands of the Abbey.

In the 14thcentury, the creation of the University, in the nearby Latin Quarter, started to threaten the so-far unquestioned power of the Saint-Germain Abbey. The Abbey then agreed to the yearly Saint-Germain Fair settling onto its grounds, thus contributing to the national visibility and notoriety of the Abbey. 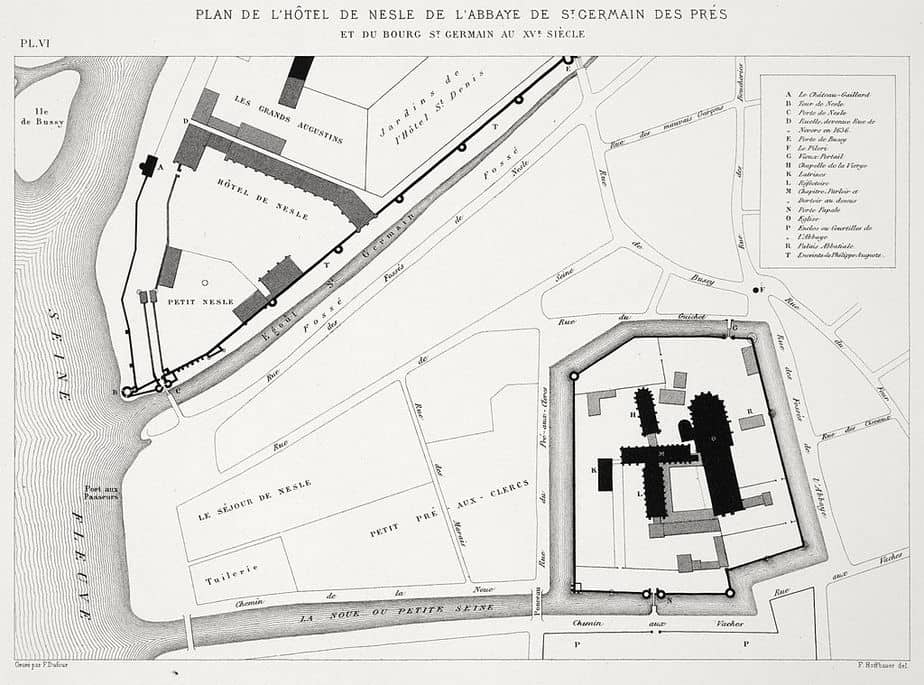 The map show the St Germain area in the 15th century. The Paris city limits appear along the canal near Hôtel de Nesle and the fortified grounds of the Abbey are clearly visible outside the city…

However, its power soon started to decrease. Lots were sold one by one, and the village was slowly included within the Paris city limits, as the city grew. 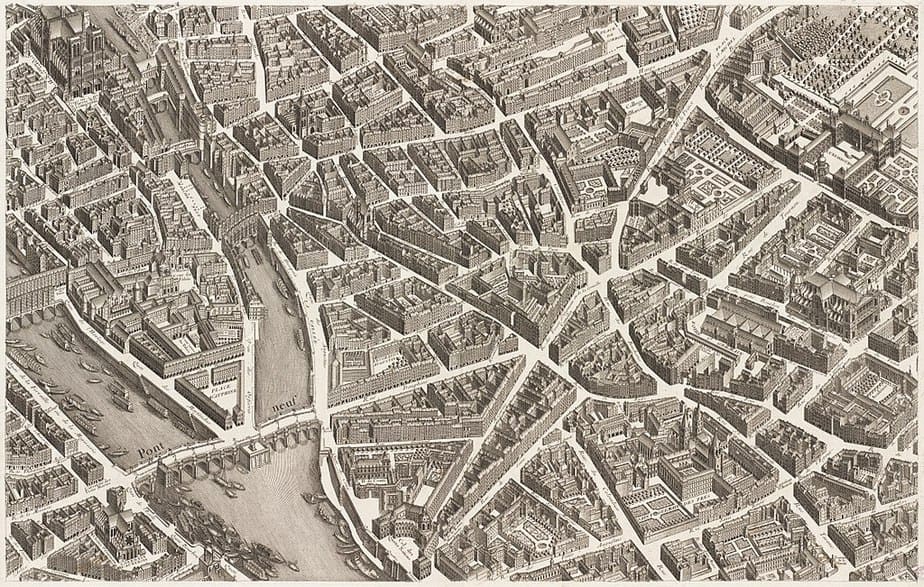 On this 16th Century map by Turgot, St Germain is clearly shown as part of the now extended Paris City limits. The abbey is visible at the bottom right with its three bell towers.

From the 16th century on, the new neighborhood of Saint-Germain-des-Prés became important for intellectual life. Philosophers, writers, artists, and politicians gathered to discuss, exchange, and debate. Many editors settled there. The neighborhood is, still today, the place to be if you are a French editor. Also, many of the greatest figures of the French Revolution resided nearby and used to gather here.

Starting during the 19th century, the creation of soon-to-be legendary cafés and brasseries – such as Les Deux Magots – allowed for larger reunions and intellectual prosperity. Verlaine, Rimbaud or Mallarmé all had habits in the area. Artists and gallerists also soon stormed the neighborhood. The tendency amplified between the two World Wars, as new writers arrived and made some of the cafés their headquarters.

At last, after the Wars, the nightlife of the neighborhood exploded. Jazz lovers in particular made the area trendy again. The 4-square-kilometer area saw some of the most important names of that time spend some wild nights here. Among them were Juliette Greco, Boris Vian, Beauvoir, Prevert, Sartre, Camus, or Queneau…

Today the neighborhood has slightly lost its trendy side, but the remains of its past glory are still very present…

These are ordered geographically, from North (by the Seine) to South, to allow you to follow a sort-of itinerary…

Of course, you may also choose to book our Saint-Germain Tour!

1. Have a private tour at Paris Mint

The very official “Hôtel de la Monnaie”, commercially nicknamed “11 Conti”, located by the Seine, is home to La Monnaie de Paris (or Paris Mint in English). It is the government’s instance in charge of producing coins and medals. The neoclassical building is home to a museum, temporary exhibitions and can be visited on your own or with a private guide.

La Monnaie de Paris is one of the oldest companies in the world. It was founded in 864. Today, it is in charge of the coin production for euros, as well as the coin productions for more than 40 other countries’ official currencies.

2. Dream of glory by the domes of The Institute and read at the Mazarine Library

Right by the Hôtel de la Monnaie is the beautiful Institut de France (Institute of France), amazingly built in front of the Louvre, across the wooden Bridge of Arts. 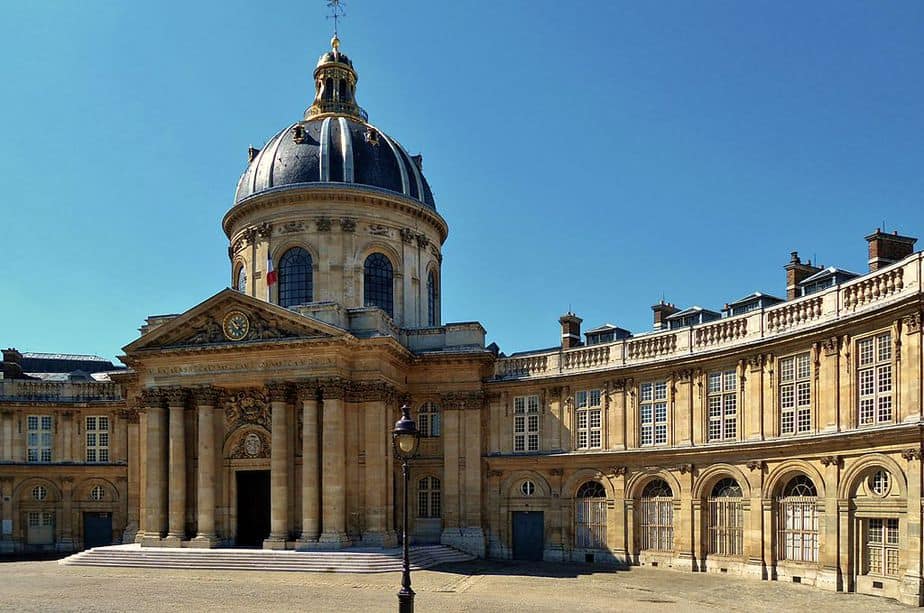 Created in the 17th century, four – then five – groups of (supposedly) masters in their fields were chosen to represent, define and gather all knowledge on Arts, the French Language, History and Archaeology, and Science. They became the one reference in their field. Dissolved under the Revolution, these Academies were all reinstated under the umbrella-name Institut de France by Napoleon in the early 19th century.

It was only at this time that it was moved from the Louvre to this beautiful building – formerly a university College: the College of the Four Nations.

Today, the “Academicians” still gather on their subject. The French Academy is the most renowned. Their choices serve as reference in the rules of the French language.

They gather under the great cupola that you can see from the outside. 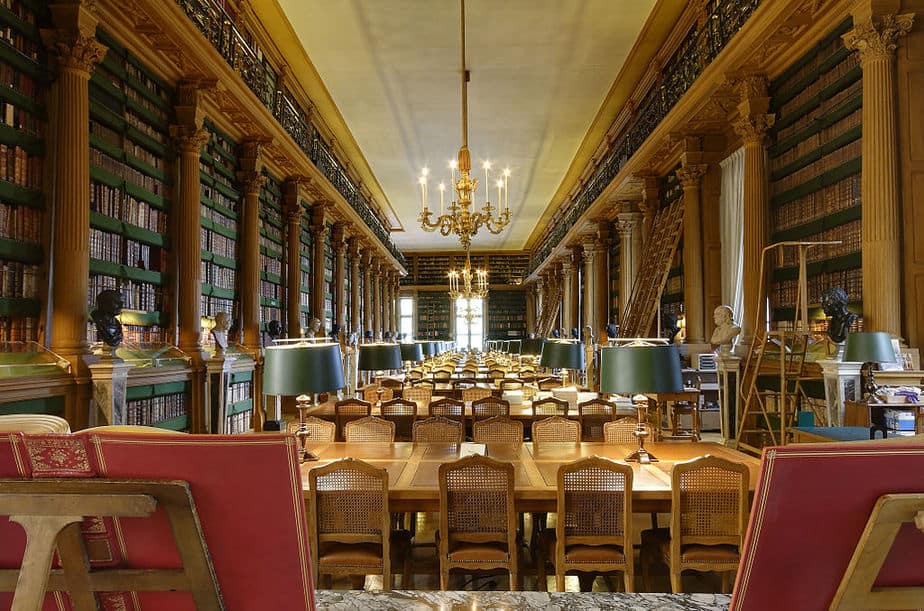 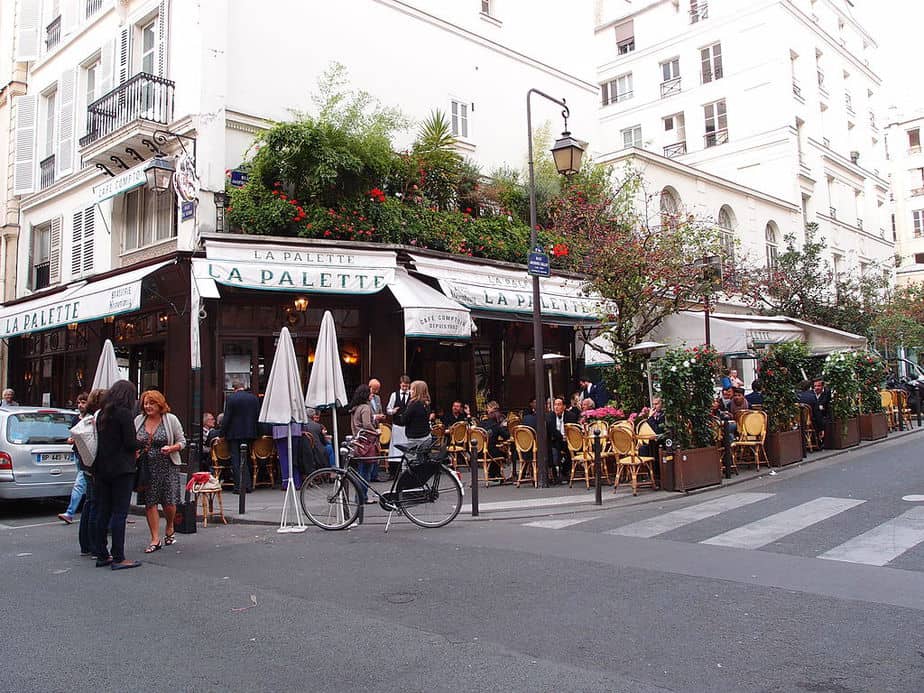 The North of Saint-Germain-des-Prés mostly consists in narrow streets lined with art galleries and concept stores. Since their quality varies through time, depending on what they display, it is pretty hard to truly advise you on which to visit. However, since most are free to enter, I recommend picking a street and strolling until you find the one that best fits you.

As a general rule, be aware that Rue de Seine (especially its middle-section near the corner with Rue Jacques-Callot) is a great choice for art galleries. If you prefer antiques, rather choose to head to Rue Jacob. 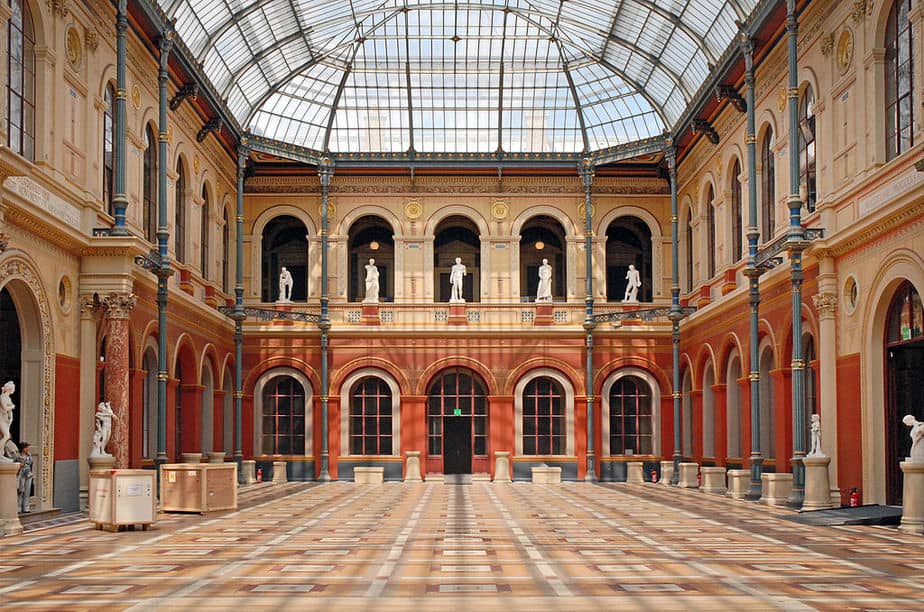 The main yard at ENSBA – by Dalbera – On Wikimedia Commons

How could a place so centered on the arts not have an art school? The Ecole Nationale Supérieure des Beaux Arts (EBSBA) is a prestigious school for art studies. The elegant buildings were built – specifically to host an art school – over three centuries, on the remains of the former convent of Petits-Augustins.

Unfortunately, most of these buildings are generally closed to the public, even though you can admire the main yard and buildings from Rue Bonaparte. You may enter the Palace of Fine Arts (entrance on the Seine side) when a temporary exhibition is present – which is quite often. As for the rest of the building, you may take a guided tour if you are here during the “Open Workshops” (Ateliers Ouverts) in June – which is the only time when the school is open to non-scholars.

5. Have a romantic walk on small Rue de Furstemberg 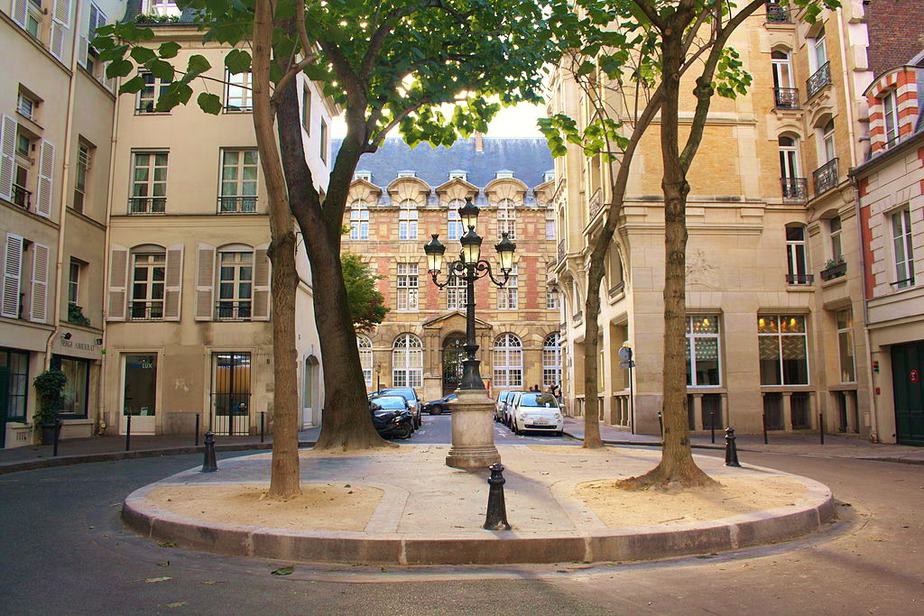 Paris is known to be the city of love and a very romantic place. Of course, some areas – such as Montmartre – are very prone to dates and romantic walks. Saint-Germain-des-Prés can also be a very good option. The quieter atmosphere and village feel of its narrow streets are quite appreciable at dusk.

If you want to experience a truly romantic place – or if you need a stunning Instagram picture – I recommend you head to the small Rue de Furstemberg. Particularly quiet, this tiny street, starting Rue Jacob, terminates elegantly with a small square, in the center of which is a typical Parisian lamppost and four paulownia trees. The whole composition is quite visual. 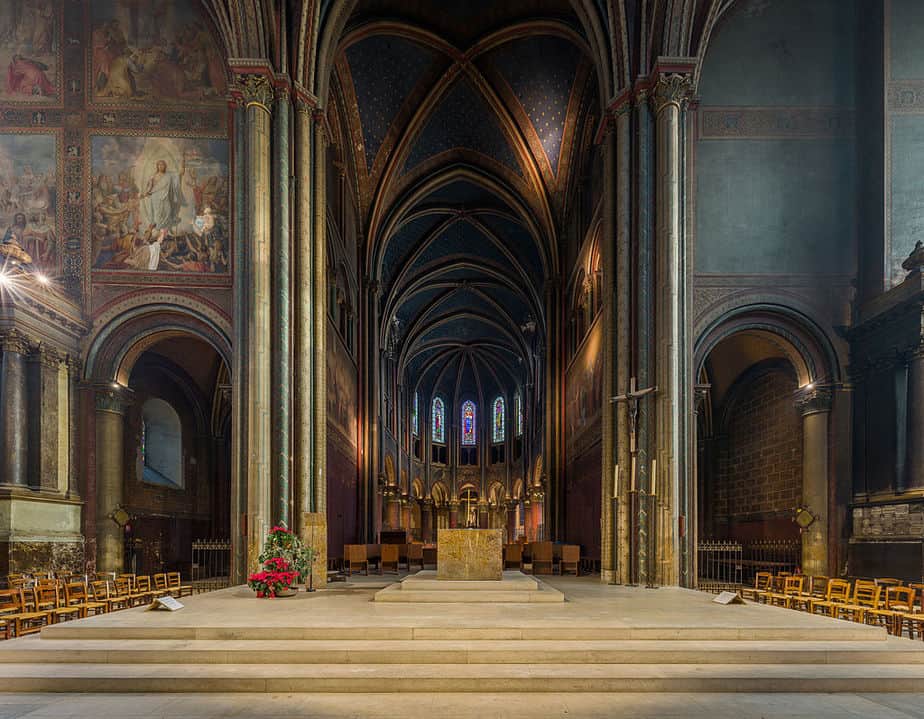 If you want to visit Saint-Germain-des-Prés, you cannot really miss what started it all! The Saint-Germain-des-Prés church is all that remains of the old Abbey. I won’t detail here the whole history of the church as it would require an entire article! Just keep in mind that, through its 1500-year history, the church was transformed. From the church of the 6th century only a few stones remain at the base of some walls. Most of the structure dates back from the 10th through 13th centuries.

Used as storage during the Revolution, it had to go through intense renovations in the 19th century.

As I previously explained, the fame of Saint-Germain partly comes from its cafés where intellectuals and artists gathered to debate. Among them, three have become legends. They all are on the Boulevard Saint-Germain.

Have a drink at Café des Deux Magots or at Café de Flore, and try having lunch at Brasserie Lipp. These have turned into real institutions! 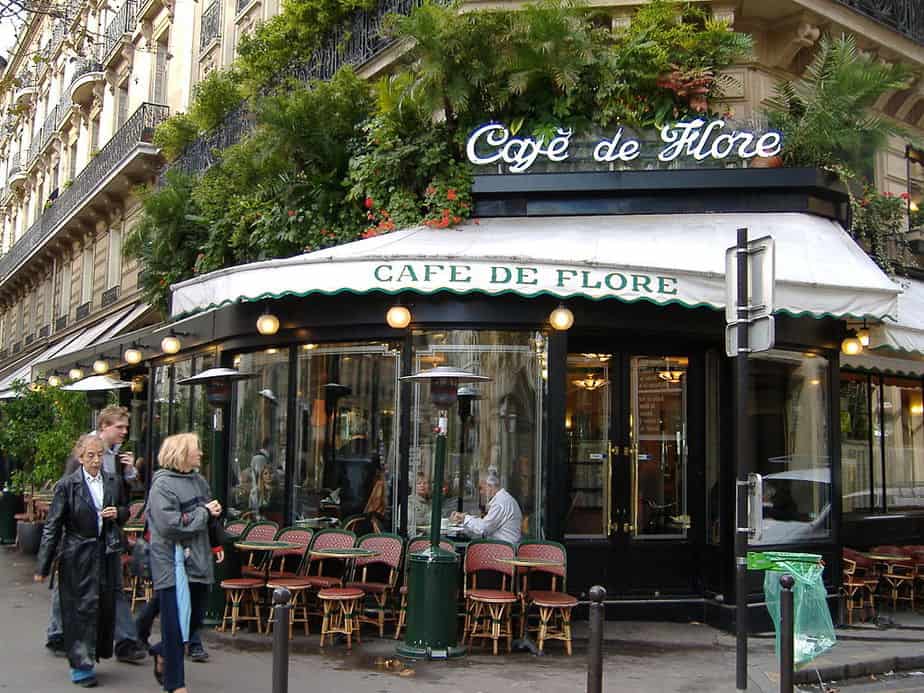 To be 100% fair, these places have become so renowned and historically impregnated that they have lost quite a bit of their former atmosphere. If you are looking for a typical Saint-Germain café, you should now head more into the smaller streets of the neighborhood. But one of those “Big Three” should be on your list at some point! It definitely is on mine. 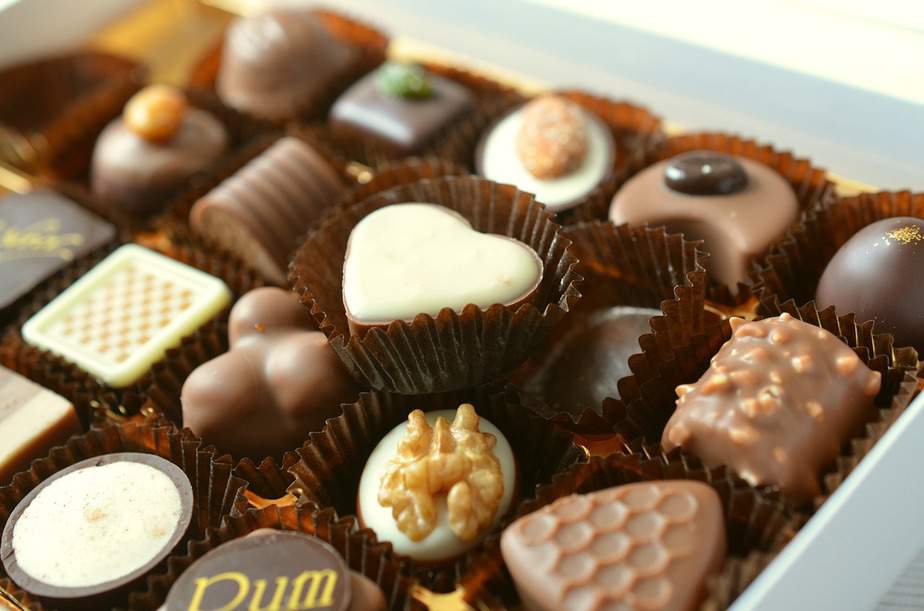 If there is one thing you might not expect at Saint-Germain, it is to taste chocolate. However, despite the whole city being a great destination for food, the Saint-Germain area has some of the most excellent – if not the best – chocolate and sweets stores and patisseries. Among the finest : 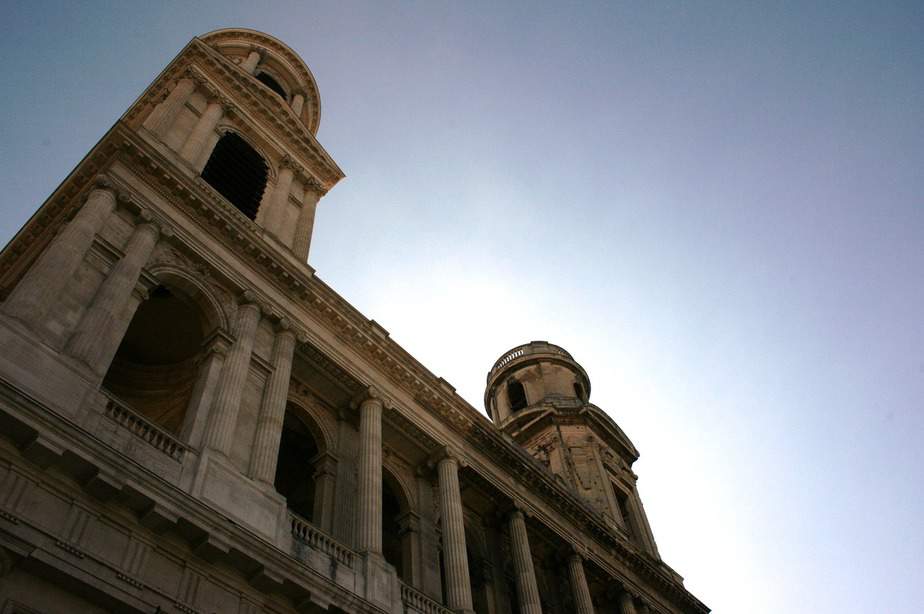 Saint Sulpice Church is one of the biggest churches in Paris and one of the main settings of Dan Brown’s bestseller, the Da Vinci Code.

Before entering look at the façade and its two different towers. Originally designed to be similar, the plans were changed several times, and the construction of the South tower was never finished. The lack of decoration and the holes used to hold the scaffolding are visible.

Do not miss the inside of the church, quite stunning, especially the Chapelle des Saints-Anges decorated with Delacroix’s paintings.

Notice also, the gnomon. The gnomon is a system comprising a line engraved in the ground, and an obelisk. Through the year, the much directed light of the sun hits the line at different locations indicating the date. Markers on the ground help identify specific dates such as solstices or Easter. The gnomon is given a much more legendary story in the Da Vinci Code but none of it is true.

If you want good cocktails – even created just for you – in a very discreet and cosy place where most tourists will never disturb you, well, you should head to Le Bar…

Le Bar is indisputably the most hidden bar in Paris. The outside barely shows there is a bar inside, no communication is ever made from the bar management, and only very regulars come and enjoy long talks in this unique place. Also, the welcoming is very friendly and prices are not to complain about in this rather-expensive area of the French Capital.

Intrigued yet? Well, Le Bar is at 27, Rue de Condé and opens from 9:00PM from Tuesdays to Saturdays. Oh! And keep it to yourselves ;)

If you want to find out more about Saint Germain, we offer guided tours of the neighborhood! Learn more here!