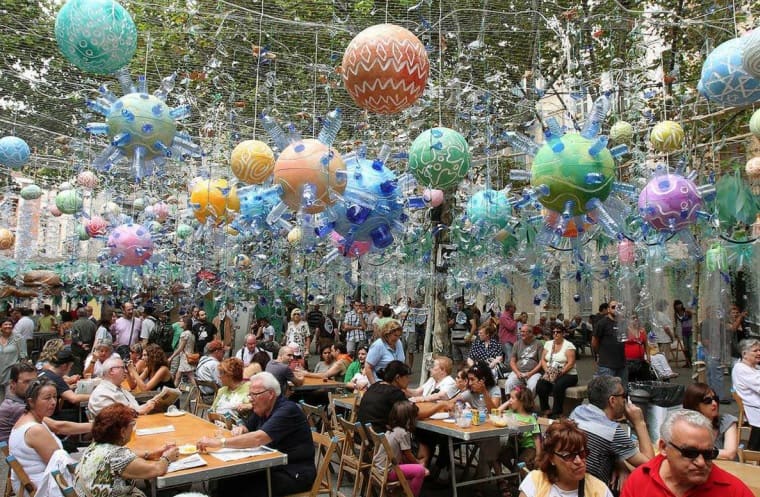 Gacia neighbourhood during the festival, image sourced from Devour Barcelona

For this list, we have excluded the visits to Barcelona’s most famous sites such as Sagrada Familia, as those can be done at any time of the year, but that doesn’t mean that these activities on the list can be done only in the summer.
In any case, here is a group of summer activities in Barcelona that you just can’t miss. 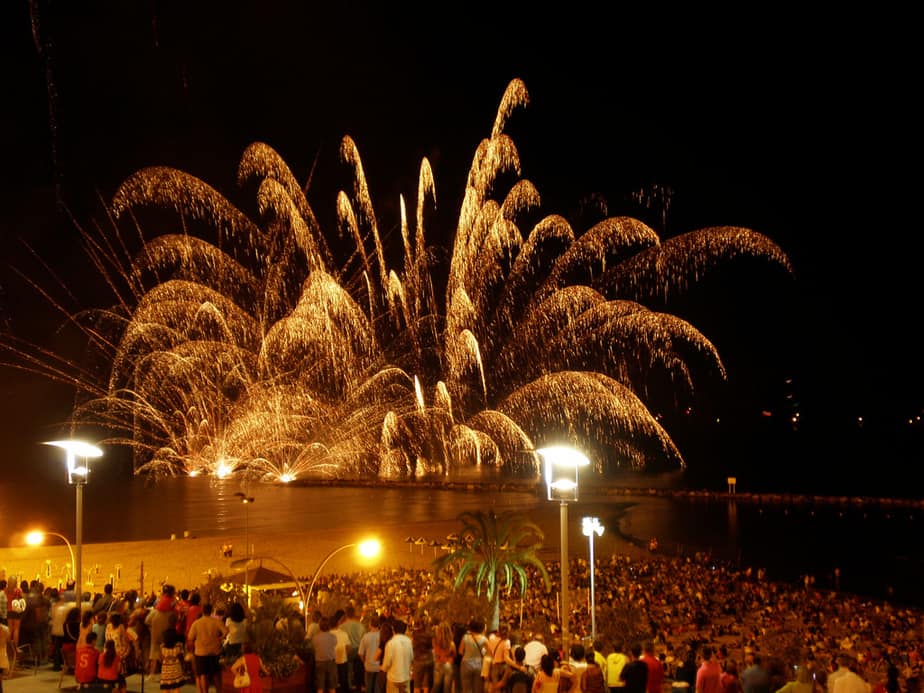 Sant Joan celebrations and fireworks on the beach in Barcelona, image sourced from Aspasios Blog

Barcelona welcomes the summer with one of the biggest festivities of the year, the Revetlla de Sant Joan (“Sant Joan Celebration”).

On the night from the 23rd to the 24th of June (a bank holiday), locals and visitors alike celebrate the arrival of the summer with night parties in neighborhoods and beaches (specially in Barceloneta) involving fire in all its shapes and forms: Bonfires, fireworks and firecrackers become the soundtrack of the night, and the smell of powder is present all over the city.

Acknowledging the magnitude of the day, metro runs all night on the night from the 23rd to the 24th. Not the best night to sleep, but a great night to enjoy. 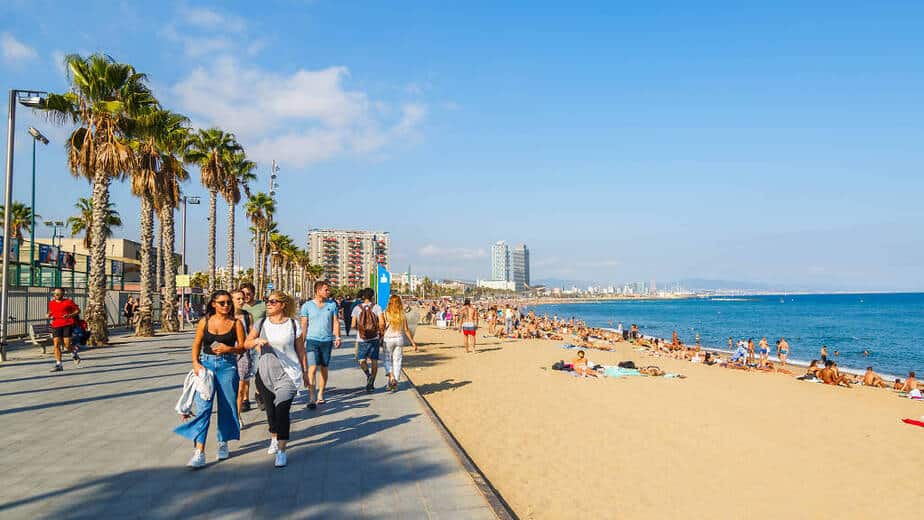 The king or queen of summer activities in Barcelona. The magic of a good bath in the sea.

Nowadays there is a world-renowned association between Barcelona and the beach, but many don’t know that this wasn’t always the case: Before the Olympics of 1992, Barcelona’s coast line was kind of hidden before rail tracks and surrounded by industrial areas, which led Barcelona citizens to look for beach areas outside the city.

Almost 27 years later the situation has changed, with citizens claiming again beaches like Bogatell or Barcelona, the latter a favourite destination. Make sure to check all the available beaches within zone 1 of the metro & commuter train area, many of them (Badalona or Montgat) are still quite unknown to the general public. If you want to explode further, make sure to check out the Garraf area or Sitges. 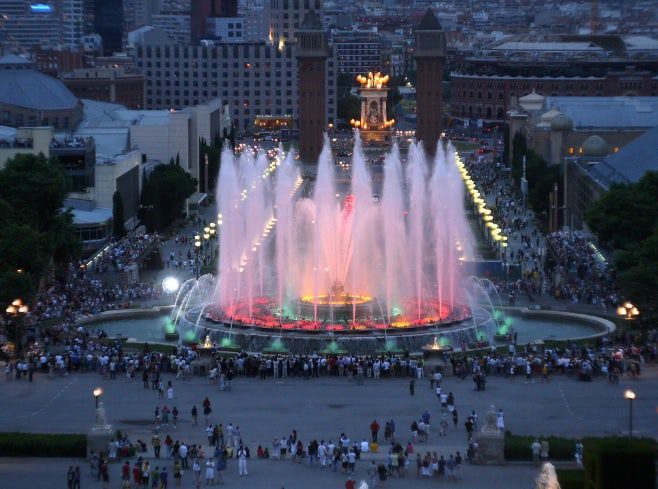 One of the best-known Summer activities in Barcelona is the show of the Montjuïc Fountains. An impressive array of water sprays that create a unique show of water, light and music, which can be witnessed for free but also enjoyed with a group.

Inaugurated in 1929 for the Barcelona International Exposition, these fountains added music to the show in the 80s, and gained worldwide notoriety in 1988 for being one of the few places where Freddie Mercury and soprano Montserrat Caballé performed their iconic song ‘Barcelona’.

The magic fountains season actually starts before the summer and can be witnessed also in the early fall, but remains an icon of summer activities in Barcelona. Make sure to visit the Fountains’ site to check the show hours, and think about having a walk in the delightful surrounding Montjuïc areas, like the Font del Gat or the Larival gardens. 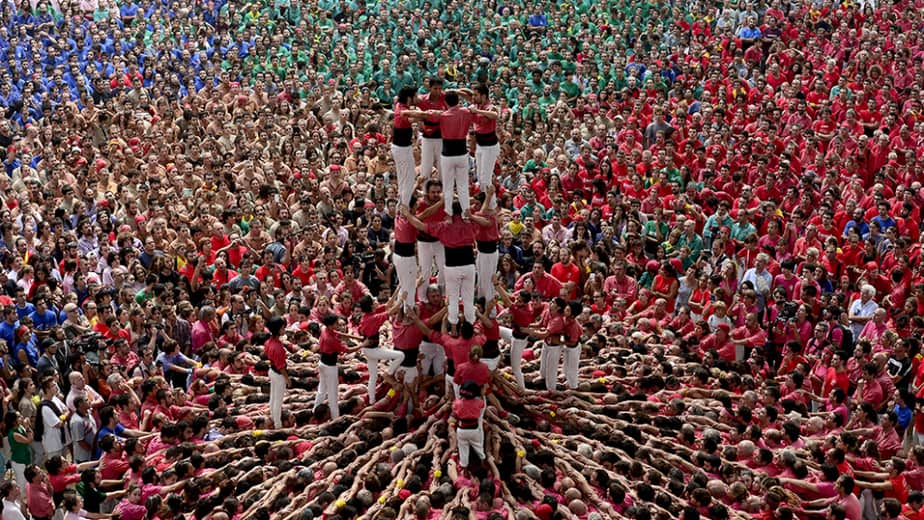 All neighborhoods in Barcelona have their “festes majors” or local festivities, and Poble Sec and Raval are no exceptions. If we include both centric neighborhoods in the same entry it is because their festivities take place at the same time period (mid July) and are bothfocused on music, popular culture parades and celebrating a sense of community. Check out their agendas as you might also find fire parades or “castellers” (human towers) exhibitions.

One of the most visually impressive summer activities in Barcelona are the “castellers” exhibitions, a tradition dating back to the mid 19th century, in which groups of people try to build the highest human towers ever done.

Even though the “castellers” season spreads from late winter to mid fall, there are plenty of opportunities of seeing these exhibitions in the summer, both in Barcelona and surrounding areas, so checking an agenda wouldn’t be a bad choice, for instance in the “Festes Majors” of neighborhoods like Gràcia, Sants or Poble Sec.

A tradition that was inscribed in 2010 on the UNESCO’s list of Intangible Cultural Heritage of Humanity, it is a must see, specially, if you are into photography. The most famous summer event when it comes to castells is Sant Felix, the exhibition linked to the local festivities of the town of Vilafranca del Penedès, outside Barcelona.

Taking place on august the 30th, this exhibition can last up to 4 hours and normally gathers the best “casteller” groups all over Catalonia. 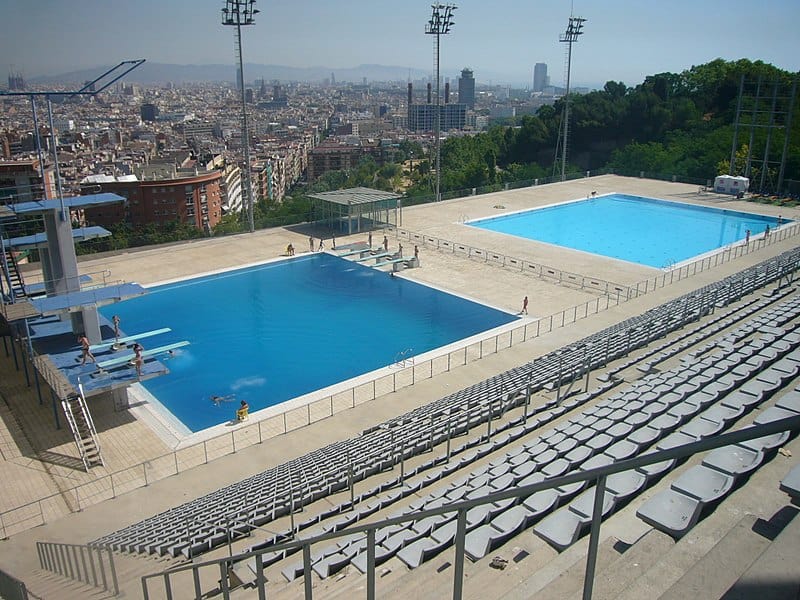 One of the most desired summer activities in Barcelona is having a good bath outdoors. If a packed beach is not your favourite option, Barcelona has many outdoor swimming pools available for everyone. Generally located in areas far from the city’s downtown, like Montjuïc, Nou Barris or Sarrià, make sure to check out the one closest to you, to have a nice, non-salty and more or less quiet bath.

Some of these swimming pools are not free and only a few of them take credit cards, make sure to check this out in advance as well, as well as their opening hours.

Gacia neighbourhood during the festival, image sourced from Devour Barcelona

Probably the most famous “festa major” of Barcelona, the neighbourhood of Gràcia becomes the heart of the city during the second week of august. Gràcia used to be an old village of its own, until it became part of the city in the late 19th century.

This distinction can be seen easily in its streets, narrow and filled with low-rise buildings in contrast to the neighboring Eixample. This distinction becomes clear during their festa major, in which Gràcia becomes a giant area of fun and color, thanks to a street decorations contest that has their neighbours working collectively months in advance in order to become the best decorated street.

If what you have just read about the “festa major” in Gràcia has sparked your interest but you won’t be in the city until the following week (the third in august) then don’t worry: That’s when the neighbourhood of Sants celebrates its own “Festa Major”.

If you don’t know the city well enough you might just associate Sants with its central train station, but it’s also an old area with an intense history.

Most of the praises sang in the text about Gràcia also apply here, including their own street decorations contest. Even if Sants’ celebrations are not as popular, they are really enjoyable. 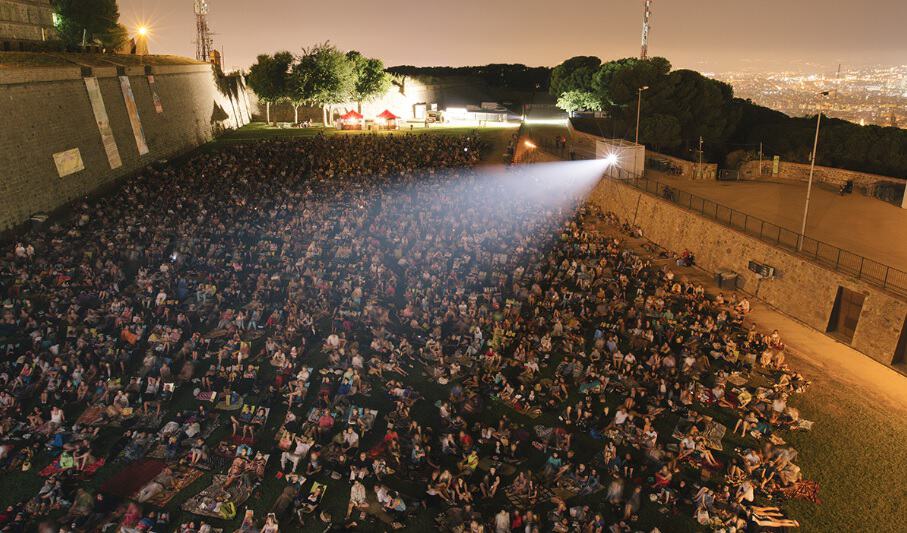 Open-Air Cinema in Montjuic, image sourced from their website SalaMontjuic

If you love watching films in the outdoors, Barcelona has many summer options for you. The most famous one is “Cinema a la Fresca” at Montjuïc’s former military castle, where every summer you can see many interesting films in a huge area along with hundreds of like-minded people.

The feature films shown are usually preceded by a short live music concert and a short film. Also interesting is the “Gandules” cycle at the main pation of the centric Centre de Cultura Contemporània (CCCB) or the “Cinema Lliure” program at Barceloneta beach, being the only one that is free.

If you don’t understand Spanish, don’t worry, as these three options show the English-speaking films in original language with Spanish subtitles.

Over the years Barcelona has become a world capital for music festivals. While Primavera Sound (the most famous one) might take place in spring, Barcelona’s summer has many different options when it comes to music festivals: Sonar Festival in June / July, Cruïlla festival in early July and Vida Festival right the following weekend.

Sonar started as a small electronic and experimental event in the mid 90s, but now it is a world-famous festival of electronic music, experimental and also urban sounds, combining acts and DJs from all over the world with other art manifestations such as art installations.

In 2019 the festival has moved its celebration from mid June to mid July because of a commercial fair, but the 2019 line up combines electronic classics like Underworld with more contemporary acts such as Bad Bunny, Asap Rocky or Skepta.

Cruïlla (Catalan word for “Crossroads”) aims to please a wider audience, and this year features a line up where Kylie Minogue and the Black Eyed Peas are the main stars, while Vida Festival has indie legends like The Charlatans and Madness as headliners. Vida festival takes place in the beach town of Vilanova I la Geltrú, 30 minutes away from Barcelona by train, but the festival and the town are well worth the visit.
Make sure to check the festivals respective sites to check the price of tickets.

Jordi is an English Teacher and Journalist who was born and raised in Barcelona. Loves films, photography and currently resides in Barcelona’s neighbourhood of Poble Sec, where part of his family is originally from. 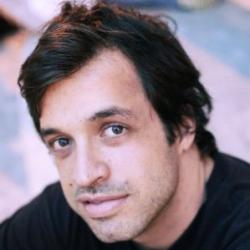 Jordi is an English Teacher and Journalist who was born and raised in Barcelona. Loves films, photography and currently resides in Barcelona’s neighbourhood of Poble Sec, where part of his family is originally from.