Where to Find the Best Pasteis de Nata in Lisbon? 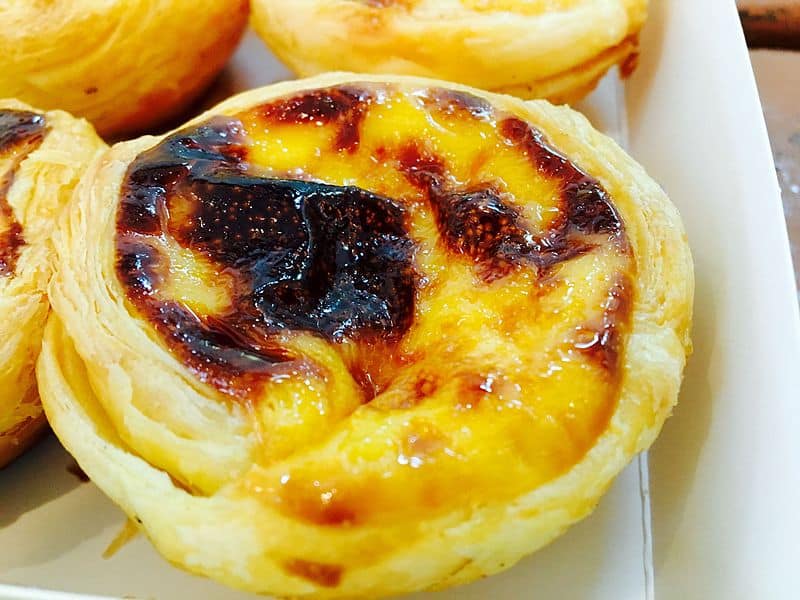 Where to Find the Best Pasteis de Nata in Lisbon?

The Culture of Pastel de Nata

Portugal is recognized for the richness and variety of its Mediterranean and transcendental cuisine that is a part of the history of this beautiful coastal country. This includes its immense variety in bakery and pastry.

The menu of cakes, croissant, breads and puddings only make a small part of everything they have to offer in terms of the use of the well-known puff pastry and pastry creams.

But no dessert stands out more than the famous and traditional national cake, the one that all the visitors of Portugal want to try: Pastel de Nata. Since its appearance and commercialization it marks a milestone in the history of creamy sweets in Portugal and in the world. 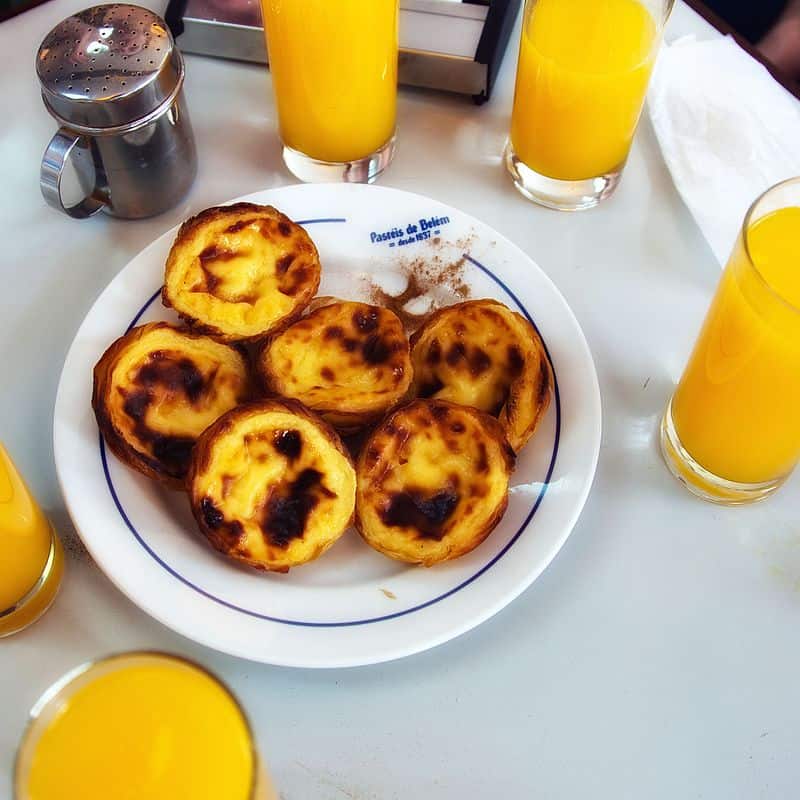 How is Pastel de Nata made?

The most repeated and common ingredients in the world of baking will always be flour, milk, butter, eggs, and of course sugar with cinnamon as key points of flavor and aroma. Mixed and used in the precise amount, these ingredients in the hands of the pastry chefs who follow the traditional recipes, create the best-selling handmade confectionery of Portugal: the Pastel de Nata.

The oldest recipe of this simple but known sweetness takes roots from the sixteenth century. It was called ‘Pastel de Leche’, the nake of which was taken from a notebook written by Infanta Doña María. This recipe has evolved and changed over the past years, but the flavor and texture are undoubtedly those made under the traditional recipes.

The original ‘Pastel de Nata’ consists of a cake type biscuit based on a basket or a bowl, the diameter does not exceed 10cm. The filling is cream based, as the name implies, with a slightly yellowish color, which must have a pasty and juicy texture inside and moderately hardened or crystallized the top of the cake, in which a small toast is roasted with a layer of caramel with a touch of cinnamon.

It is a dessert that is recommended to eat when it is freshly made, preferably lukewarm. These can be consumed both cold and hot and it still maintains its good taste, although it can take two to three days for the pastel to change its natural textures. 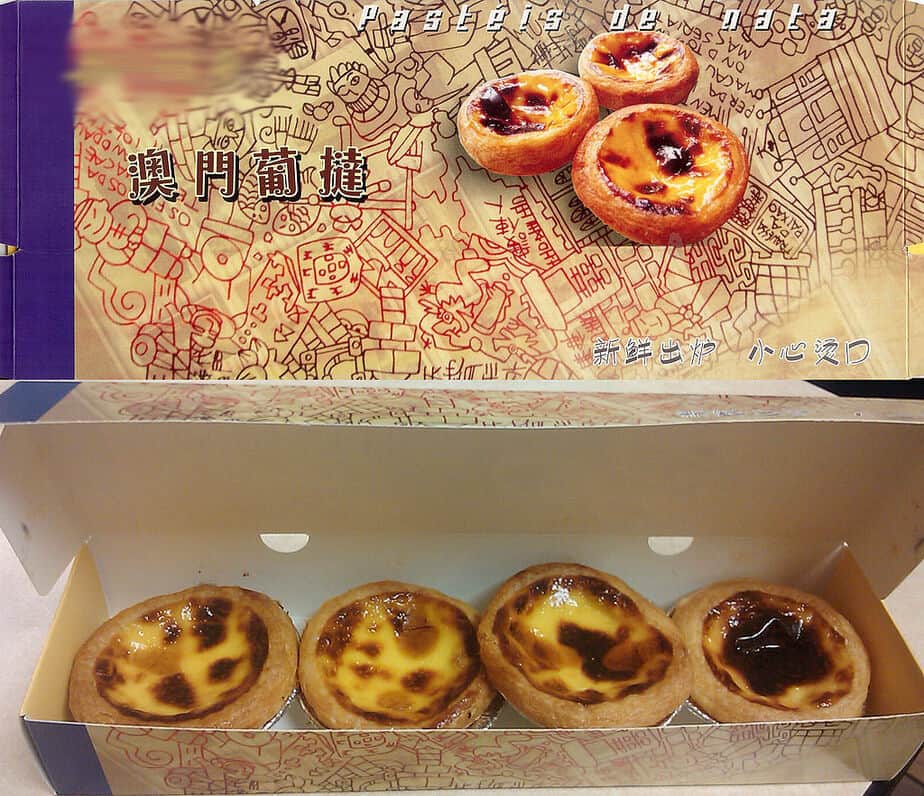 Globally, Pastel de Nata are already part of the menu of many other countries. They maintain good rating in the world exhibitions and international competitions. They have been part of the stand that represents Portugal in the cultural exhibition known as Café Europe. On the other hand, in Asian countries such as China and Cambodia it is distributed by international restaurant chains such as KFC under the name of “Dan-Ta”, which translates as ‘Egg Pie’. Popularity that was achieved in these countries was due to the transculturization that occurred in Macau after being a colony of Portugal.

The candy that is most consumed by the Portuguese is Pastel de Nata. While tourists always are directed  to ‘Pastel de Belém’ restaurant to see what they are missing out. 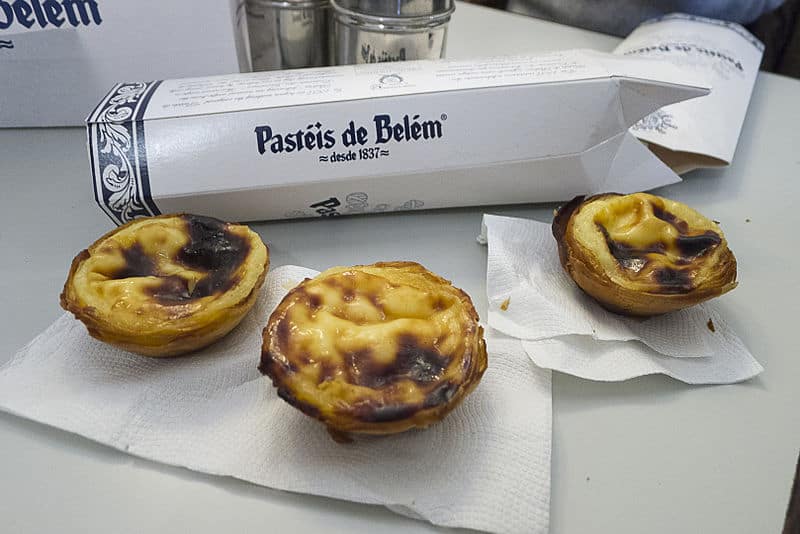 Many of the foreigners who arrive to Portugal search for “Pastéis de Belém” instead of Pastel de Nata. Despite being similar in appearance and taste they are not the same. “Pastéis de Belém” are a part of a registered trademark, which protects both the name of its factory and its recipe.

The name belongs only to one of the bakeries that produces this type of cake, which in fact is the most famous but it’s not the only one. All the other bakeries that dispatch this type of a cake sell it simply with the name of Pastel de Nata.

Casa Pastéis de Belém sells a story apart from selling cakes, which is what gives them the international popularity they possess. The company says it follows the recipe that has been passed down from generation to generation within the Alves family, which today are still the owners of that factory who claimed to have never disclosed the secret of baking. 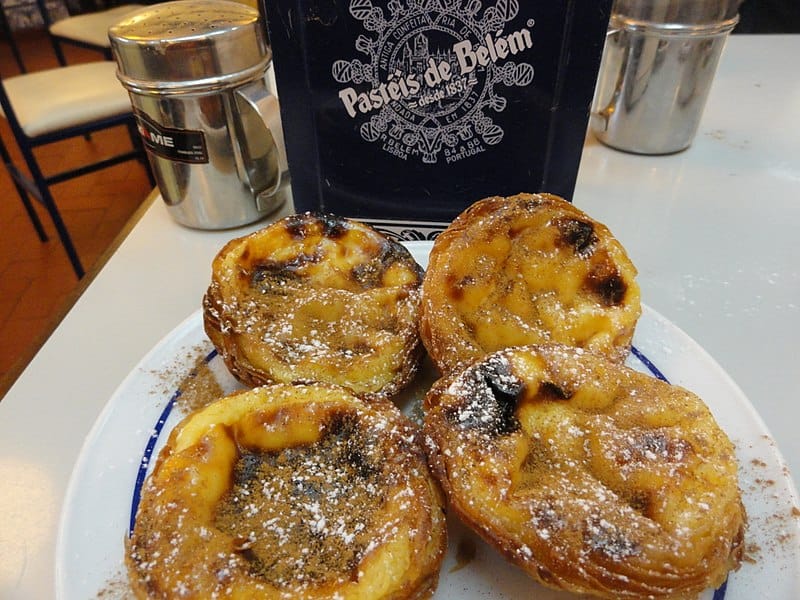 This highly protected recipe is believed to have been created in the monastery of Santa María de Belém. After the revolution of liberal cause that occurred in 1820 that many monasteries were closed. The story says that the baker of the monastery sold the famous recipe to the Alves family. Mr. Domingo Rafael was a man and an entrepreneur who began manufacturing them under the name of ” Pastéis de Belém.

From a small store associated with a sugarcane refinery that it was adjacent to the monastery, and due to the high influx of local people and visitors who attend the Jeronimos monastery and the tourist tower of Bethlehem through that area, its popularity and its sale were dynamited.

Since then, this place works manufacturing more than 20,000 units of the famous cakes without stopping following a secret and traditional recipe without altering, with a mass production that covers the sale and consumption within the premises like any other coffee shop and that increases to double if it is a holiday in the country.

This recipe is indeed secret, but it does not cease to have similarities with the classic Pastel de Nata, both are puff pastry tarts with an egg-based cream, sugar and milk and whose size fits in the palm of one hand. Even so, the difference can be seen, and this lies in the cream, the Pastel de Nata use cream mainly while the Pastéis de Belém use a base with greater zeal in the yolk of the egg and the sugar, which gives it an appearance of a little more intense in terms of color. 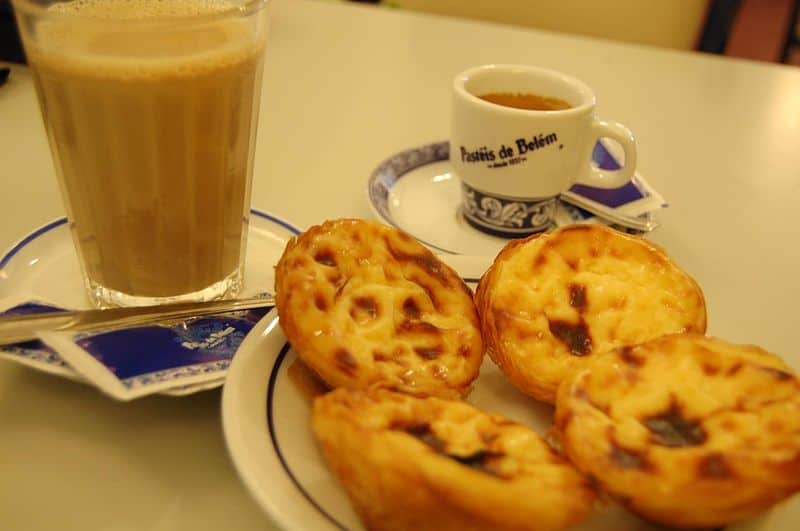 All the Lisbon cafes have these sweets, and it is those small variations that make them stand out from each other: the amount of caramel on top, the cooking time, the consistency of the cream, the sweetness or the texture of the puff pastry, are all influential and the result of each despite using the same ingredients will always be a matter of proportion.

The key to success to get a good Pastel de Nata is ultimately the quality of the ingredients that are expected to be used.

It is the traditional Pastéis de Belém factory, which also has huge rooms where you can sit and try them, receiving the quick service. You simply want to take you time and enjoy them while those are freshly made, just from the oven.

Ideal option if you are looking to take a rest after a walk through one of the most touristic and famous areas in Lisbon. If you visit it on weekends or on holidays, be aware that there will be many people in line waiting to buy the renowned cakes.

This pastry shop is concealed in the Praça de Luis Camoes in Lisbon. This branch was opened recently and it has two other offices in which its production factory is included in Mafra. From there it does not only leave its delicious and award-winning Pastel de Nata but also a whole variety of traditional sweets such as Queijadas and Parrameiros, sweets with which the branch has won about 15 awards in national competitions. Beautiful place for its Pastel de Nata which makes it worth visiting if you want to enjoy a good and varied breakfast.

Many of the Pastel de Natas that can be tried in other parts of the city. Among those you can see the mass production. Here they serve always warm and freshly made, they stand out with the crunchiness of their puff pastry and their authentic flavor cream.

This bakery many has other branches. When you enter their cafe you can hear the sound of a bell from the street. They serve an exquisite Pastel de Nata, fresh and ready to be consumed. One of the stores where you can also see through and watch the entire production process. If your interest is any other cake with another flavor, those mad of a passion fruit stand out.

It has been the only restaurant on the list of competitions with the award to Pastel de Nata. Their specialty is the products of the sea, but here the delicious Pastel de Nata that is being baked by the recipe of the same baker Paulo Oliveira.

Located in the busy and lively area of Barrio Alto, it allows you to enjoy an exceptional partying area of Lisbon while you give yourself a moment of calmness in this bakery of extensive tradition that was  founded in 1920. It has been recognized for its Pastel de Nata, and more after absorbing the brand known as Aloma, which has also been awarded for its Pastel de Nata.

Their specialty is of course, Pastel de Nata. They have been been awarded in local competitions and their bakery is one of the best in the whole city. Come and enjoy!

If you want to enjoy a Pastel de Nata of 32 years of tradition, which starts from the work of the great-grandfather of the family that governs these patisseries. The good traditional flavor is what you can find in this bakery, or any of its three branches are also famous for its variety of handmade sweets, especially cookies.

An ideal bakery for breakfast were you can enjoy bread with sausage, a good Bolo de Rei, and of course its specialty, Pastel de Nata. Come to this place in the North of Lisbon to taste Pastel de Nata worthy of a reward.

This pastry abounds cakes of all kinds and flavors, without missing the typical Pastel de Nata. In addition, the architecture of this beautiful old place is an ideal place to sit and enjoy a sweet creamy cake with so much history and good qaulity expresso.