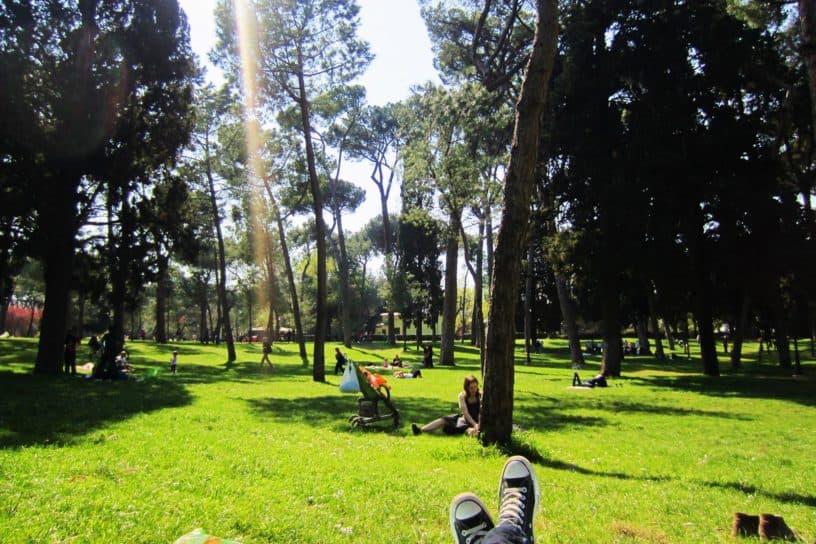 Picnic at the Villa Borghese park in Rome, image sourced from Oddvisor

Not unsurprisingly for a city this big, Rome has plenty of parks. Not only can they become the perfect spot for a picnic: the good news is that most of them are just around the corner from some of the most famous landmarks in the capital of Italy!

So, take some time off from your tourist activities and be ready to relax… and marvel: these spots are must-sees in their own right. Exactly like the monuments and museums you came to visit! 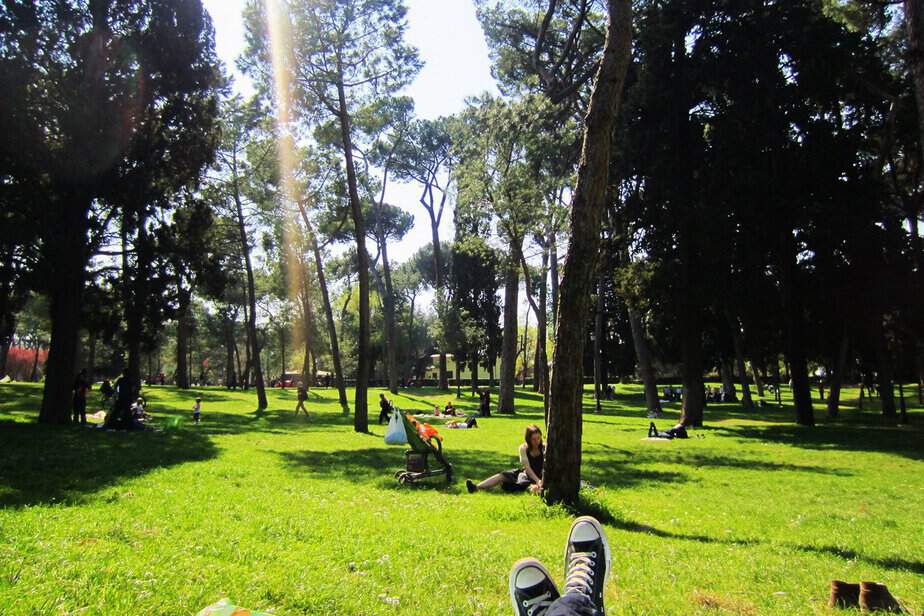 Picnic at the Villa Borghese park in Rome, image sourced from Oddvisor

Take Villa Borghese, for instance: it’s strategically placed right above the Spanish Steps, which means it’s a perfect destination at the end of the classic Trevi Fountain-Via del Corso route.

The Borghese Gardens, as English-speakers call them, are one of those places in Rome that are more than just a park. There, you can visit museums, get to the local zoo, see movies, enjoy a Shakespeare play or two, enjoy your aperitivo and obviously do a myriad of outdoors activities.

Shaped as a heart as it is, it’s also a favorite for happy couples and it has a number of cozy corners where you and your significant other can set up your blanket. Villa Borghese is one of the most easily reachable parks in Rome, as visitors can get to it by bus, light rail, tram or subway. It’s open 24/7. 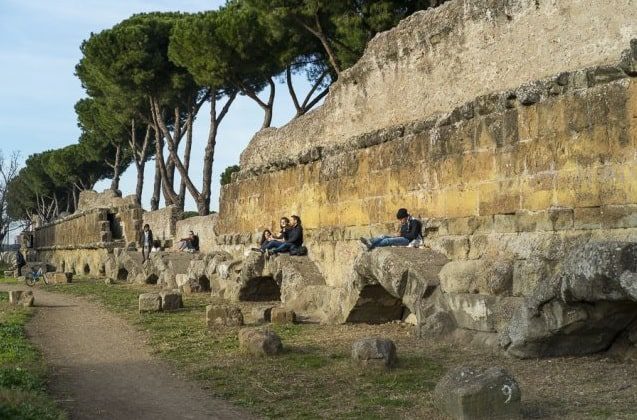 The picturesque reminder of what the Eternal City used to look like to travelers coming from outside of the urban area in the past few centuries, this park in south Rome offers stunning views over no less than seven different aqueducts – hence its name.

Apparently unkempt (it’s actually protected by the Archaeological Superintendence of Rome and is part of the Appian Way Regional Park, as is nearby Parco della Caffarella), Parco degli Acquedotti is fascinating and different from your average green grounds.

You can reach it by subway in no time (“Giulio Agricola” on the A line) and it’s open until nightfall. And if you still feel hungry after your picnic, look for the pizza place by the main entrance for more delicious food!

Tucked away, close to the Colosseum: Villa Celimontana 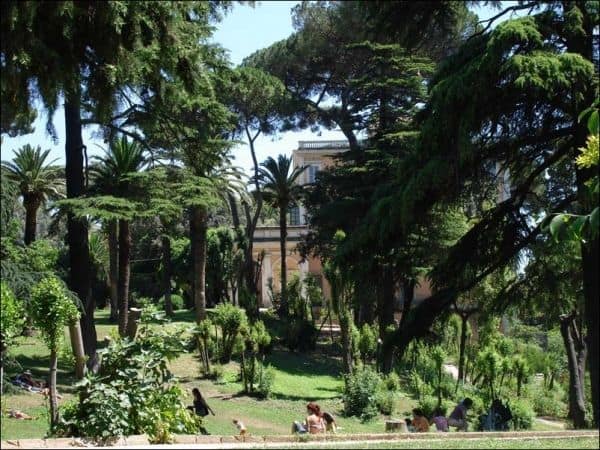 Villa Celimontana in Rome, image sourced from The Barrel Bar and Grill

Very few foreigners visiting Rome are aware of the park in Villa Celimontana because a) lodged as it is uphill of the Colosseum and Forum people tend to flock to those landmarks and barely pass through it and b) by Roman standards, it’s actually a small spot, so it goes unnoticed.

Like many other parks in Rome, it used to be the garden of a noble mansion (“Villa”): in this instance, it’s Palazzo Mattei, now the headquarters for the Italian Geographical Society. The park is the venue for a couple of major festivals, but can be accessed daily, offering a quiet corner in an area that’s otherwise always bustling with people and energy. Note that this park will close at sundown when no events are taking place in it. 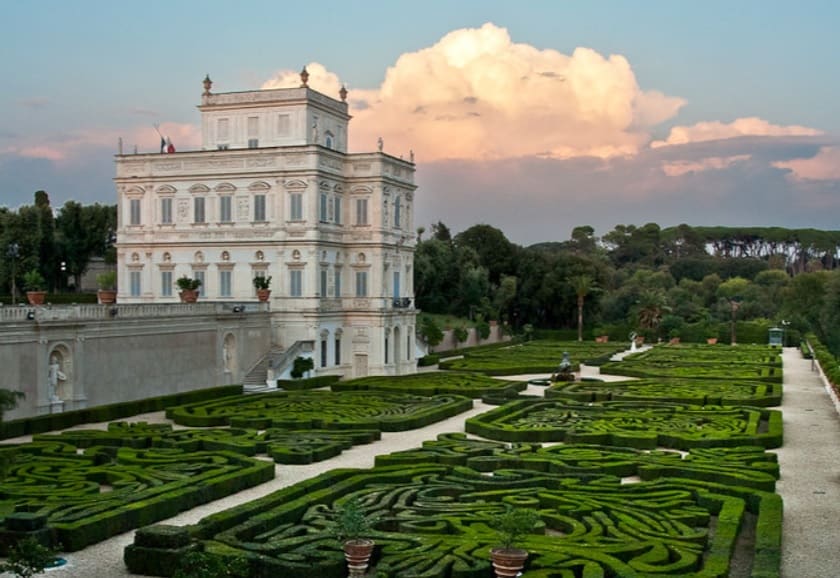 Villa Doria-Pamphilj (just “Villa Pamphili”, if you want to refer to it the Roman way!) is the biggest park around, with its 184 hectares (roughly 455 acres). Plenty of space for a picnic here!

The former hunting grounds for the Doria-Pamphilj family, this beautiful spot has maintained for the most part its wild personality, and it’s not uncommon, in fact, to have chance encounters with some of Rome’s most common wildlife species, among them boars and foxes.

Villa Pamphili can be reached by bus or after riding the whole route of tram line no. 8 (those staying in Trastevere or wanting to reach that borough will surely be familiar with it), followed by a short walk.

Picnics are so common here that pre-made baskets can be bought at a bistro at one of the park’s entrances – a genius idea when you feel like it’s time for an impromptu snack in the green. Be sure to leave before it closes down (at sunset). 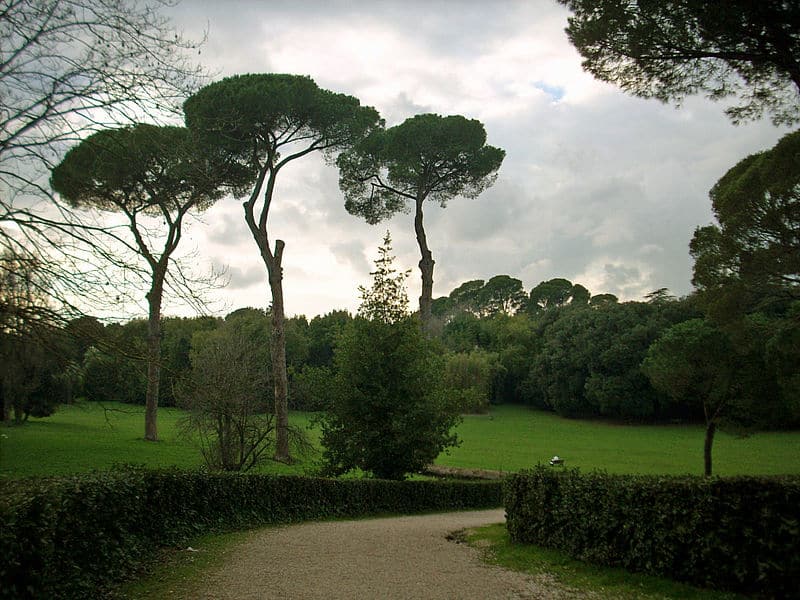 One more case of hunting grounds (for the former kings of Italy, no less!) turned into a public park, Villa Ada is a 450 acres marvel, the second biggest in Rome, along the Via Salaria (Salaria Way) in the posh Parioli and Trieste neighborhoods in north Rome. It is comfortably connected to the center of the city by several different bus lines.

Open every day from 7AM to 8PM

Finding a picnic spot here is not only easy but also a surprising experience: part woodland area, part English garden, with catacombs, bomb shelters, music festivals and even foreign embassies, you never know what awaits you just around that majestic pine tree or at the end of that footpath…

The ghost of Mussolini: Villa Torlonia 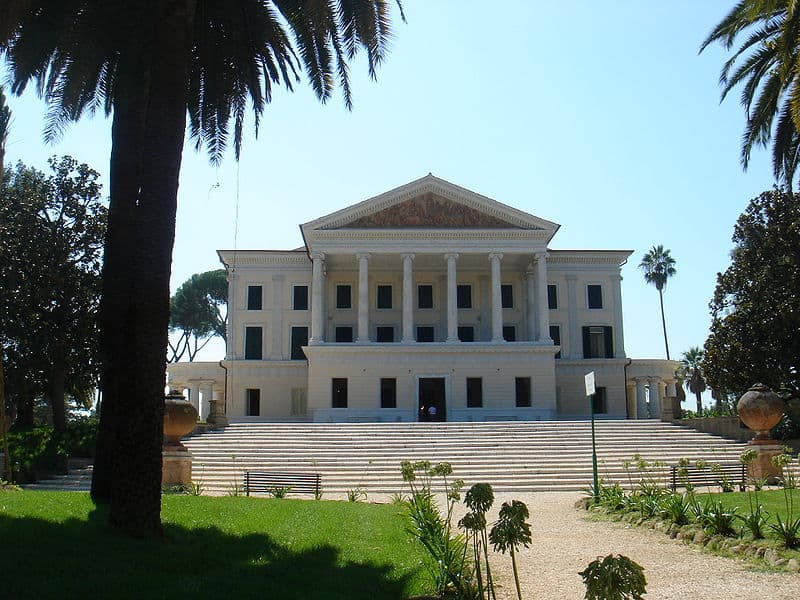 Located in the same general area as Villa Ada, Benito Mussolini himself famously bought this beautiful mansion (and the gardens that came with it) from the princes Torlonia.

After the fall of the dictator, this estate in north-east Rome was briefly lived in by British soldiers and American GIs, and then meticulously restored to become a museum.

While you will need tickets for those, the park is free to visit and enjoy, every day from dawn til dusk. Even if you don’t care about museums, don’t miss the “Casina delle Civette”, particularly, a funny looking building which will be the perfect backdrop for your pictures.

For those who’d rather sit at a table rather than having a picnic, you can also find a great restaurant here (“La Limonaia”, the former lemon greenhouse in the estate). Villa Torlonia can be reached by bus from the central train station at Roma Termini, or by subway (the closest stop is “Policlinico” on the B line). 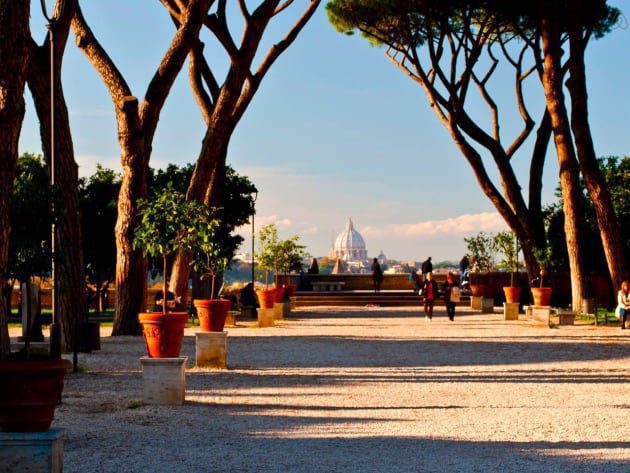 More of a walled garden than an actual park (it may very well be the smallest public green space in Rome), Giardino degli Aranci (which translates as “Orange Garden”) is also one of the city’s top spots for a stunning view over the roofs of Trastevere, the Jewish Ghetto and so much more of the center. It’s open daily until the sun goes down.

You will work an appetite walking uphill on the Aventine Hill to reach the place after getting close to it by subway (“Circo Massimo” on the B line), but know that your picnic here will have to be minimal: you’ll have lots of competition!

The “other” spot on the Janiculum Hill: Villa Sciarra

Many other guides will suggest climbing to the top of the Janiculum for your picnic in Rome, but the top of the hill there is hardly quiet – the views are beautiful but crowded, and car traffic is definitely an issue.

This small-ish park lodged between that hill and the Trastevere neighborhood below is a good alternative.

Mostly known by local residents and those interested in visiting the Italian Institute of Germanic Studies, which is hosted there, it has its entrance on Via delle Mura Gianicolensi or Via Dandolo. Villa Sciarra can be reached by bus from central Rome and is open from daybreak to sunset. 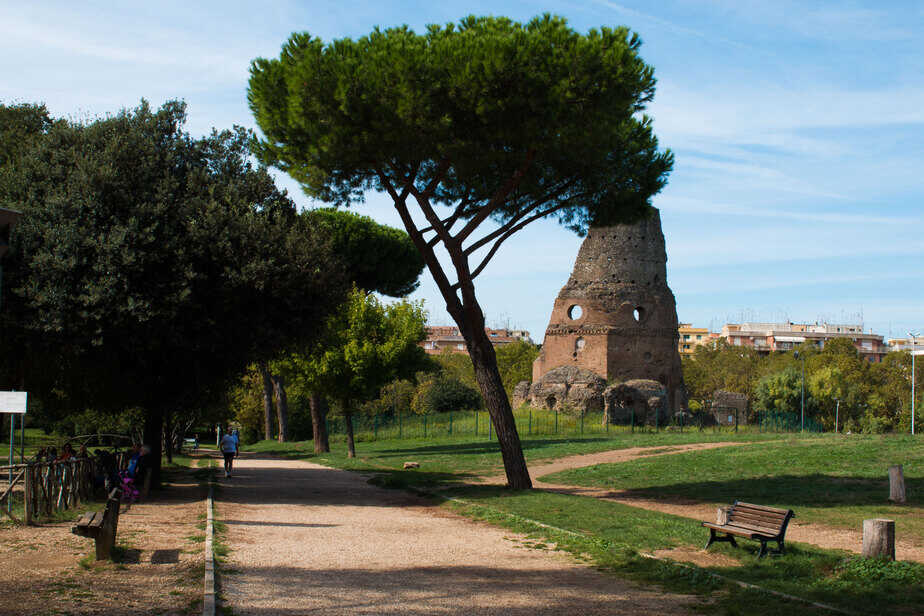 As visitors look to explore Rome away from the usual tourist spots, they also start moving out of the city center, for instance by looking at accommodations in the hip Tor Pignattara or Pigneto neighborhoods, untouched by the spreading gentrification.

Villa Gordiani is the largest park close to those, developing along Via Prenestina (Prenestina Way).

Unlike other parks named “Villa”, this didn’t belong to an aristocrat family, but to an ancient Roman gens, the Gordiani: when the area was turned into a park, administrators paid homage to some of its early inhabitants. And indeed you can have your picnic in the shadows of many impressive Roman remains peppering these gardens.

The park can be reached by bus, tram or subway (C line, with the closest stop at “Teano”) 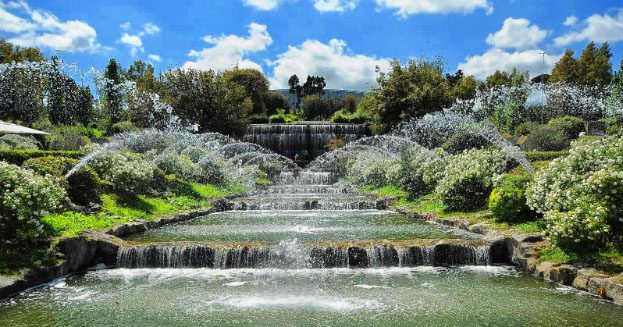 The EUR district is a must-visit destination for all lovers of modern architecture and history, having been imagined during Mussolini’s regime, but it’s not immediately obvious as a picnic destination.

And yet, this is exactly where connoisseurs go, choosing the shores of the “Laghetto dell’EUR”, the small lake by the PalaEUR multi-purpose arena, an artificial basin built for the 1960s Olympics.

The whole area is well-connected to the city center by bus and subway (several stops on the blue B line will take you in the neighborhood, and “EUR Palasport” is the closest to the lake)