Top 10 paintings to see in the Louvre Museum 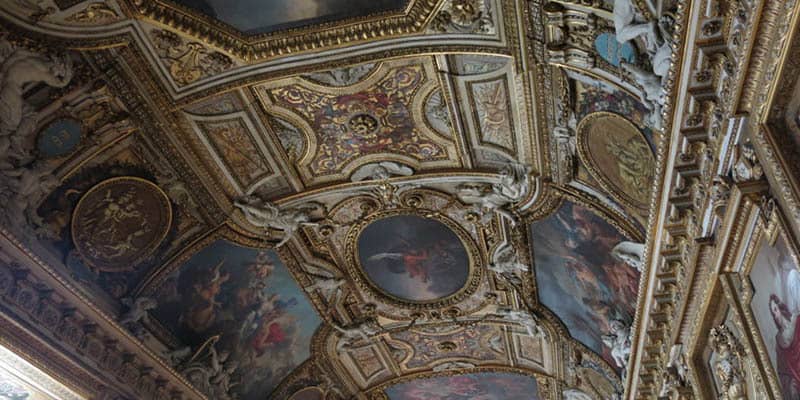 Top 10 paintings in the Louvre Museum

If you’re coming to Paris, to visit the Louvre is probably on your to-do list. You also probably want to see, more than anything else, the Mona Lisa portrait by Leonardo da Vinci. Many people only come to the Louvre to see the enigmatic lady. And that is quite understandable. It is the most famous and the most visited museum in the world thanks to this painting. Plus, the painting is also considered to be the most valuable work of art ever. So, whenever people come to the Louvre, they rush towards her and have a couple of selfies with her ;) If you want to know the best way to see the Mona Lisa, check this article!

My advice, if you want to have a look at her portrait in peace, is to come to the Louvre at the opening hour. The early bird catches the worm. If you want to fully enjoy the Louvre Museum, you definitely have to come as early as possible. Because the Louvre Museum is the biggest museum in the world and has many art treasures you absolutely need to see. I love Paris and I love all the art and culture it has to offer. So, I went -once again- to the Louvre and I’ve came up with a list of my favorite paintings. Read on to find out my top 10 paintings in the Louvre Museum.

The painting depicts the moment Jesus had to carry his cross to his own crucifixion. This piece of art is on my list for several reasons. There are many intriguing details. For instance, it is said that Jesus was tortured and whipped before his execution, but in this painting, he appears well-dressed and strong by the way he carries his cross.

Those who believe and support him are on the right side of the painting, they walk behind Jesus, and those who despise him are on the left side of the painting, walking in front of him. But the most striking detail, the one detail that caught my attention, is the look Jesus and his mother exchange. Jesus is looking at his mother as he walks to his execution. It’s as if they were saying goodbye to one another with great sadness. It’s a religious painting, but we can feel the despair and the love between the mother and the son. 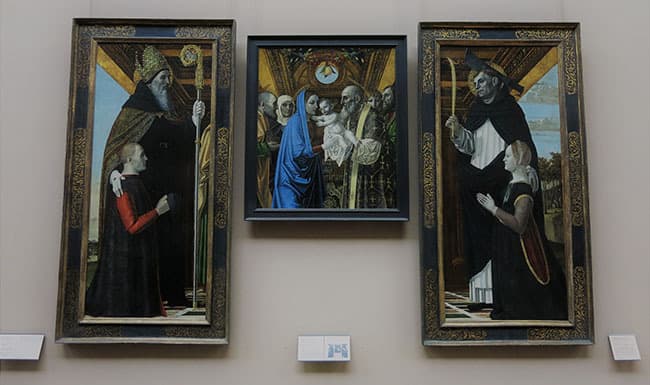 Ambrogio da Fossano is another Italian Renaissance artist. This set of paintings is believed to have been made around 1494. The centerpiece is called “La présentation au temple”, the left one is called “Saint Augustin et un donateur agenouillé” and the right one is “Saint Pierre martyr et une donatrice agenouillée”. It entered the Louvre Museum in 1863. You can have a look at this set, in the Louvre Museum, in the 1st floor, Denon alley.

I really loved this artwork. Firstly because of the fact that it is divided into three different paintings. I think it is pretty unique and original. Secondly, because of the choice of colors, it is mainly dark and cold colors with a few warm ones. It gives to Ambrogio da Fossano’s piece of art a one-of-a-kind atmosphere. 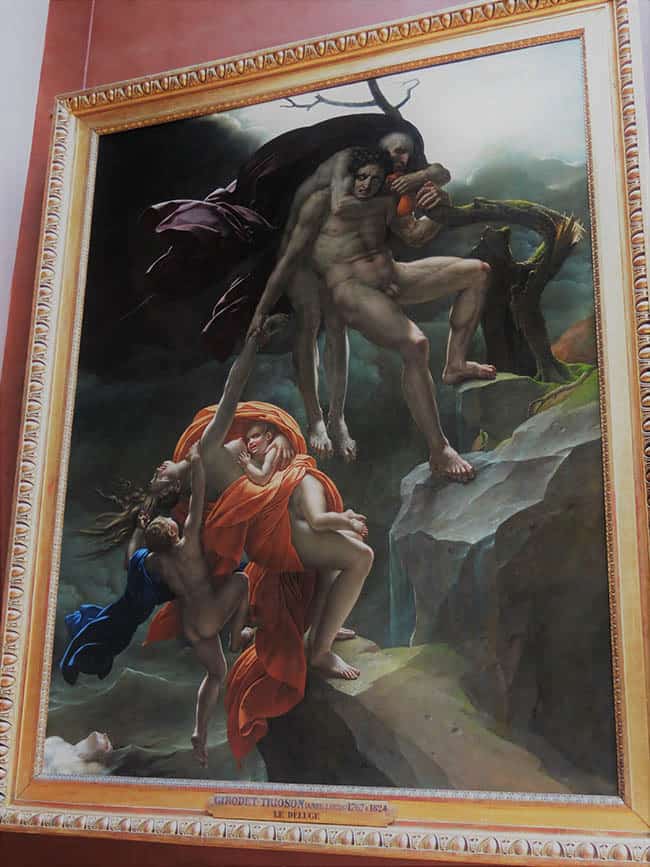 Next on my top 10 paintings in the Louvre Museum is “Scène de déluge” by Anne-Louis Girodet, a French painter. I think it is a very strong painting. It entered the Louvre Museum in 1818. And it is huge! It is really impressive, be it for its dimensions or for its details, the perspective and the story it tells.

The “déluge” is a biblical cataclysm. In English, it is the Flood. God was unhappy with His creation, He was disappointed with men. So, He decided to destroy everything He had created. Usually, paintings that depict the Flood often present Nature uprising. So we often see gigantic paintings showing extremely rough seas and tiny men trying to save themselves.

But in “Scène de déluge” by Anne-Louis Girodet, we have a completely different perspective. We see a family trying to survive as best as possible. We can see that the whole family relies on the family man – young and strong – that has to carry all the weight of his family, from his father to his elder child. The family is desperate and tries to hold on to each other as hard as they can, otherwise, they will face the same end as the woman at the bottom of the painting who’s already dead. 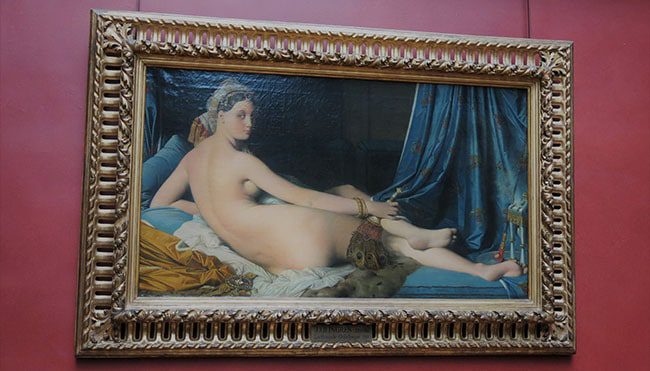 This painting was ordered by Napoleon’s sister, Caroline of Murat, queen of Naples. “Une odalisque” was finished in 1814. When it was first exhibited, it has been criticized. According to the people of the time, the woman body was not realistic, it did not correspond to the real female body. Because some limbs are just too long.

At some level, these comments might be true. But one cannot ignore the fact that it is anyway very beautiful and sensual. One gets hypnotized by the exotic looks of the odalisque. 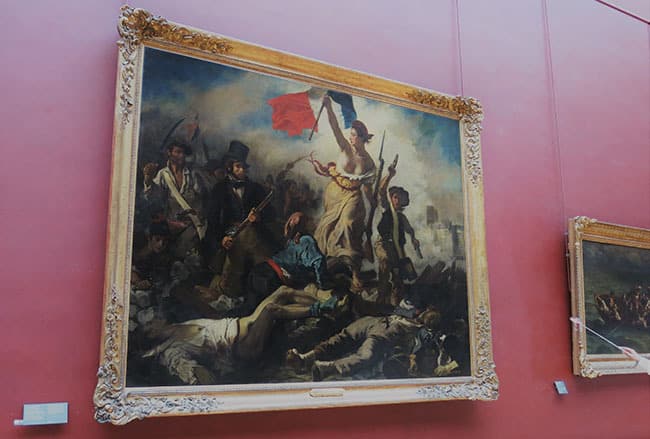 If you come to Paris, you have to see this painting as much as you need to see the Mona Lisa. If this painting was not in your “to-see list” yet, you can add it now. Next on my top 10 paintings in the Louvre Museum is “La Liberté guidant le peuple” by Eugène Delacroix.

This painting depicts the July Revolution in Paris, also known as “Les Trois Glorieuses” in French. During three days, the people rose up against the King Charles X and his ordinances that were to suppress Liberal opposition and some civil liberties.

“La Liberté guidant le peuple” illustrates the glorious and free Parisians who fought for their rights, in the city of Paris. We can see it takes place in Paris because of the Notre Dame in the background. The painting symbolizes the French way of thinking. People who always speak their minds and stand for what they believe in. In the painting, Freedom is represented by the woman in the center. She embodies the victory and the sovereignty of the people. There is so much more to tell about this piece of art, that is why you should absolutely see it live in the Louvre Museum.

Jusepe de Ribera was a Spanish Tenebrism artist. He used strong contrasts of light and darkness to produce dramatic effects in his paintings. “Saint Paul Ermite” dates from 1625 and entered the museum in 1875. The first time I saw “Saint Paul Ermite” in the Louvre Museum, it instantly caught all my attention and I spent several minutes looking at the painting. The “chiaroscuro” technique is truly mesmerizing and carried out to perfection.

The character in the painting is Saint Paul Ermite. He was one of the first Christians to flee to the Egyptian deserts from the persecutions. Legend has it that a crow used to come and feed him in his cave.

This painting is so impressive! I was astonished by the amount of detail in “Le cardinal Melchior de Polignac visitant Saint-Pierre de Rome”. I’m sure you will love it as much as I do. Moreover, in the same room, you will find three other paintings by the same artist in the Louvre Museum. They all depict scenes of Rome.

Giovanni Paolo Pannini is an Italian painter and architect, but he’s most famous for his veduta, which are paintings of a town or a city.

Arcimboldo was a 16th-century Italian mannerist. He is famous for creating original portraits using different objects, such as fishes, vegetables, flowers and fruits. So his masterpiece “The Four Seasons” had obviously to be on my top 10 paintings in the Louvre Museum.

I’ve already talked to people who hated his creations, thinking it was kind of creepy and somewhat disturbing. But, in my opinion, it is very original and outstanding. I find it very funny and it reminds me of some sort of collage. It is definitely a must-see at the Louvre Museum. 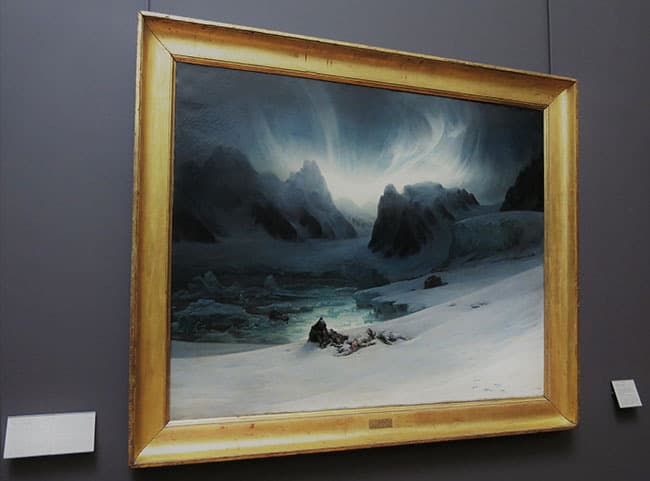 François Biard was a 19th-century French painter. In 1839, the artist went on a scientific expedition in the Arctic. When he came back, he created several landscape paintings. But this one must be by far his most extraordinary.

In this painting, Biard allies beauty with death, close to perfection. The castaways are trapped in the ice at the forefront, while we can witness the beauty of the aurora borealis at the background.

“Scène de la Saint-Barthélemy” was produced by Joseph-Nicolas Robert-Fleury in 1833. It depicts the St. Bartholomew’s Day massacre in 1572 that took place during the French Wars of Religion in Paris. It was a targeted group of assassinations against the Protestants on Saint Bartholomew’s day.

The painting entered the Museum in 1833. It is part of my top 10 paintings in the Louvre Museum because the facial expressions of the characters and the precision are stunning. All the details on the characters faces are breathtaking. It is as if the artist was there to witness the scene. That is why I consider this painting worth the look!

My top 10 paintings in the Louvre Museum is now over! I hope you’ve enjoyed it! Feel free to share with me your thoughts and tell me which ones were your favorite too! If you want to know more about the Louvre Museum, you should definitely read this article. Some useful tips are provided for you, to make sure you enjoy the city and its landmarks in the best conditions!

How to buy tickets for Le Louvre?

Last but not least, the Louvre entrance is always incredibly crowded and the queues can be really long! You can purchase tickets directly at the ticket office or you can buy advanced tickets for any day with our partner Tiqets (smartphone tickets).