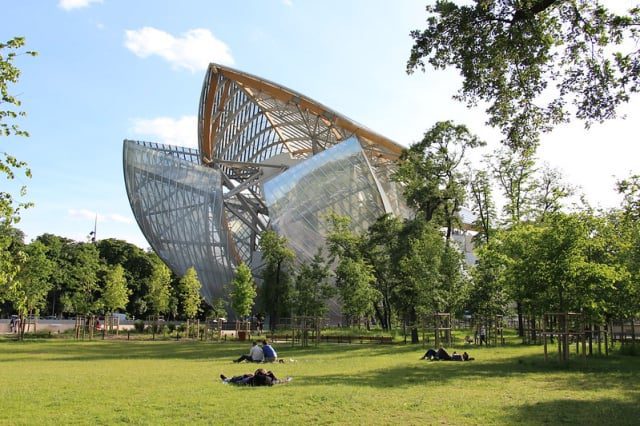 Paris is most well known for it’s iconic Haussmannian architecture. That’s thanks to a massive overhaul of the winding medieval streets, overcrowded tenement buildings and unhygienic living conditions that plagued the city in the late 19th century. Emperor Napoleon III commissioned his prefect at the time, Baron Haussmann, with the task. Thanks to this pair, Paris looks the way that it does today!

But, that doesn’t mean that there isn’t other types of architecture to admire in Paris! Le Marais is one of the only areas that has stuck to its medieval roots, and there is also some really cool modern architecture to be found.

This art museum was designed by architects Renzo Piano and Richard Rogers for an architectural design competition. The two architects wanted functional structural elements (such as electrical wires, pipes, etc.) to be outside the building.

This way, the inside could be fully used to expose art. Today, you could say that the building that houses the museum is a work of art itself!

Le Centre Pompidou should be on your list if you love contemporary art.

2. The headquarters of the French Communist Party 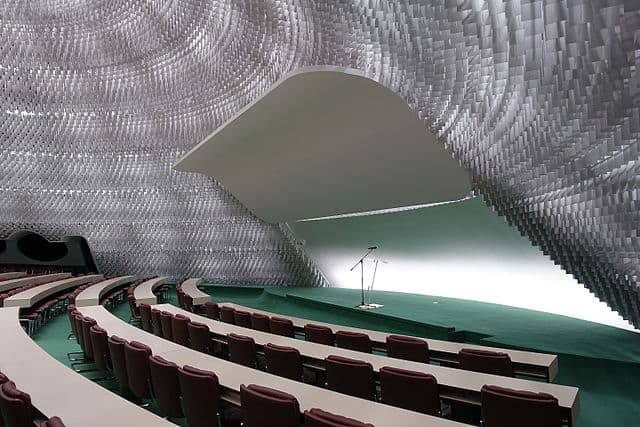 Le Siège du Parti communiste français (the headquarters of the French Communist party in English) is also known as the Espace Niemeyer. The structure is named after the Brazilian architect Oscar Niemeyer who is responsible for it’s design!

Fun fact about the French Communist Party headquarters building: in 2013 a big part of the movie Blue Indigo (L’écume des jours in French), with Audrey Tautou and Romain Duris was shot in the building!

Entry fee: You can take a guided tour of the headquarters upon appointment only via their website.

In 2006, the architect Edouard François was tasked with renovating the luxurious Hotêl Barriere Le Fouquet.

He decided to recreate a typical Haussmannian facade in grey concrete. And so the architecture of this building is a mix of historical and contemporary design! The rooftop is the best place to admire this modern architecture gem.

Entry fee: You can book a room by clicking here.

Opening hours: There are several bars and restaurants inside the hotel with varying hours. Click here to learn more! 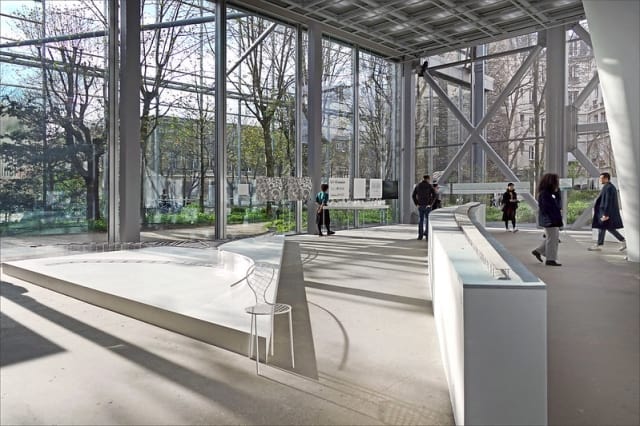 The architect Jean Nouvel designed this new building in 1994. Nouvel wanted to highlight and utilize transparency in the design, which he achieved through the high ceilings and glass walls!

If you’re interested in photography, paintings, design and sculpture, head to the Fondation Cartier. The foundation is funded by and named after the luxury jewellery design house Cartier.

The garden was designed by Lothar Baumgarten. Here, you can find 35 different types of trees inside of it.

The Fondation Louis Vuitton building was designed by architect Franck Gehry in 2014. Gehry is one of my favorite architects, and I absolutely love this museum for the building alone!

It is located in the Jardin d’Acclimatation, near near the Bois de Boulogne. It is made of concrete and features a glass roof. The building has been compared to a cloud, an iceberg and a ship, all of which I can understand!

In fact, the building is meant to outshine Fondation Pinault in Venise, which is also called Palazzo Grassi. With that in mind, you can clearly see the competiton between François Pinault and Bernard Arnault (the Chief Executive Officer of LVMH) in the luxury field. 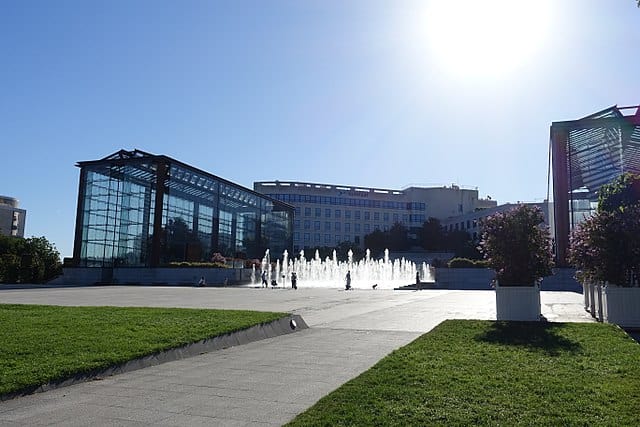 It was opened in 1986 and it’s the best place in Paris to admire luxuriant vegetation and nice fountains. I used to live near this park, and I loved the large grassy areas, perfect for setting up camp on a sunny day.

Most of the parks in Paris tend to get pretty crowded during the warmer months, but I’ve never found that at the Parc André Citroën. I like to think of this as my secret oasis in Paris!

The architect cabinet Jakob + Macfarlane built this massive building in 2008. The project started in the hopes of bringing contemporary style to this former industrial site.

The building has been the home of the Arts ludiques – Le Musée (Museum of Playful Arts) association since 2013. There are also restaurants, nightclubs and the IFM (Institut Français de la Mode) school inside!

An excellent view of the Seine River can be admired from the large green elevated terrace.

This is maybe the most famous gem on my list!

The pyramid was designed by the Chinese-American architect I. M. Pei and was inaugurated in 1989. The pyramid itself is made of metal and glass, and the French president François Mitterrand commissioned it.

Parisians did not like the pyramid when it was first installed. Today, it is well loved and is considered to be a symbol of the city!

Word on the street is that President Mitterrand had an affair Egyptian mistress, the famous singer Dalida. So maybe you can see the connexion between this Egyptian girl and the pyramid?

Entry fee: Free to view the pyramid from outside 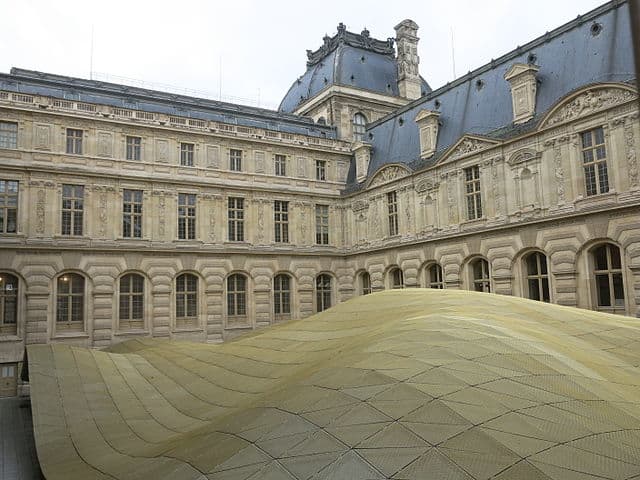 Cour Visconti at the Louvre by Tangopaso – WikiCommons

In the Musée du Louvre, you’ll find an entire department dedicated to the Islamic Arts in the cour Visconti.

The exhibition spaces are under a window with a wavy form. It’s composed of 1600 glass triangles. It was designed in 2012 by architects Rudy Ricciotti and Mario Bellini. They say the window reminds them of a wing of a dragonfly or a magic carpet! I can definitely see what they mean!

Practical information for visiting the Louvre 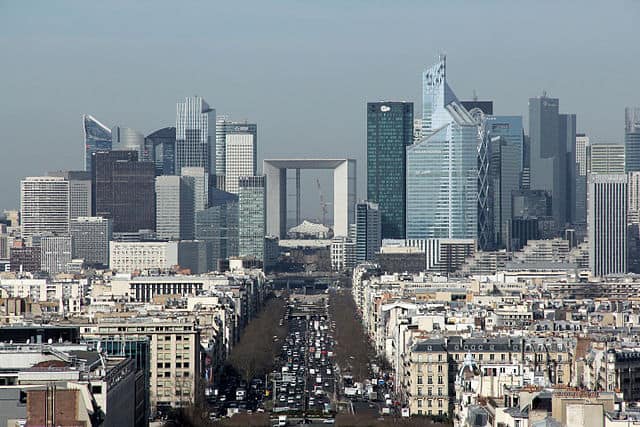 Okay, I’m cheating a bit for this last gem…but I promise it’s worth it!

La Défense, the Central Business District of Paris is composed of a lot of buildings that are master pieces of modern architecture.

The highest one is Tour First, with 23m high. There is also the famous Grande Arche de la Défense, the modern version of the Arc de Triomphe!

And here is! It is the end of my top 10 gems of modern architecture in Paris! You now know all the main modern buildings of the capital city. I hope you will see have the chance to see a few (if not all!) of them in your Parisian trip, as they are much more impressive when it’s really in front of you!

If you want to tour Paris with us, click here to discover all of our walking tour options and make your booking.

Maéva studies political sciences at Sciences Po Paris, in Saint Germain-des-Prés. She likes to walk in the streets of Paris with friends and discover new hidden places. She's also an "Invader" hunter! Completely in love with her city, she likes to share her passion through Parisian fun facts. 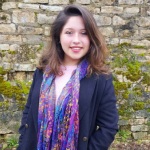 Maéva studies political sciences at Sciences Po Paris, in Saint Germain-des-Prés. She likes to walk in the streets of Paris with friends and discover new hidden places. She's also an "Invader" hunter! Completely in love with her city, she likes to share her passion through Parisian fun facts.