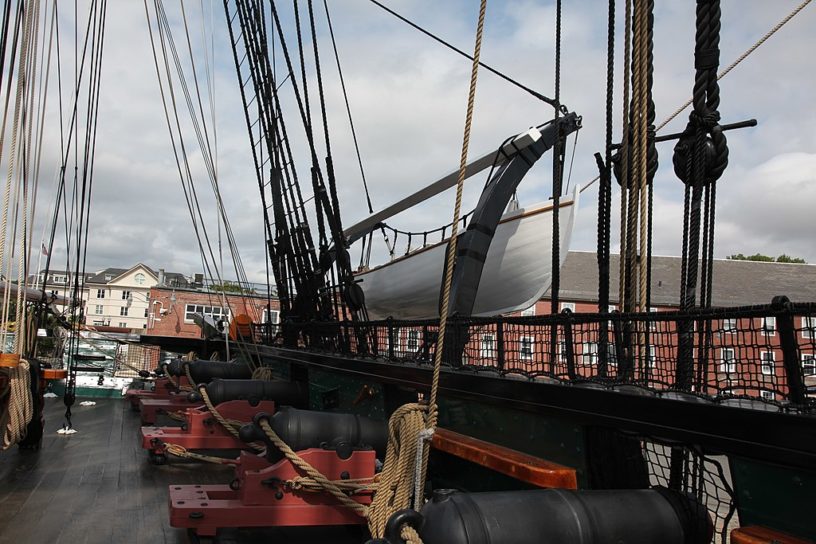 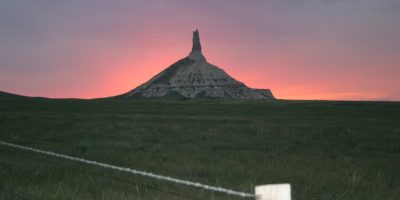 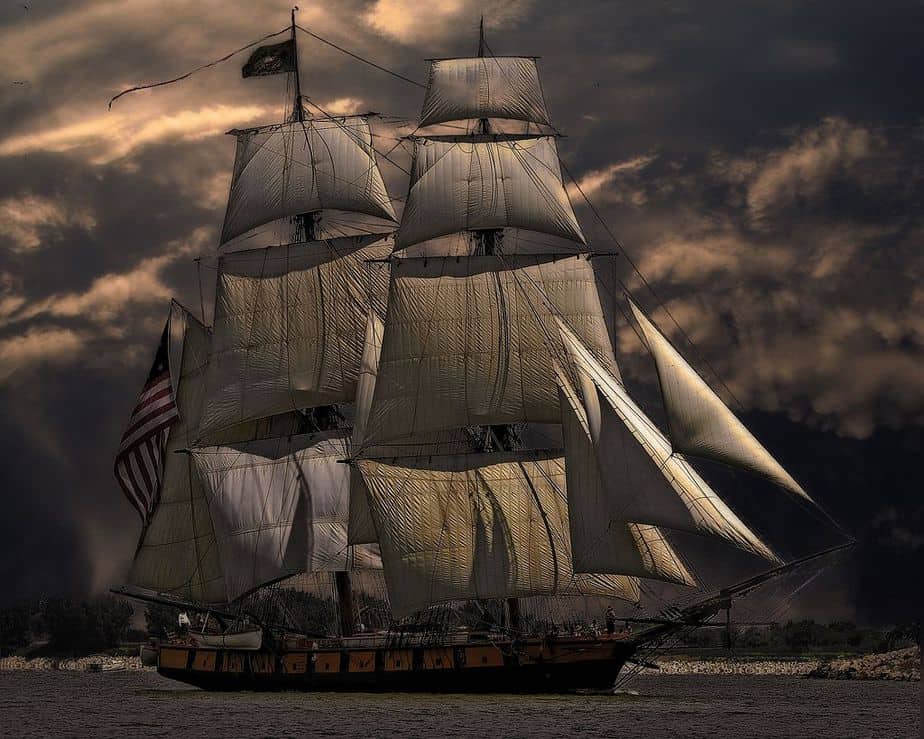 The USS Constitution is a three-mast – wooden-hulled frigate belonging to the
United States Navy. The bulky frigate is the oldest ship of any type still afloat
because the HMS Victory, while older, is preserved in a dry dock located in
Portsmouth, England. Here are some remarkable facts about this legendary ship.

Prior to independence, the British Royal Navy was responsible for the safety and protection of the thirteen American colonies. However, upon attaining independence in 1776, this responsibility would have to be internalized as the threat from pirates and foreign navies remained real.

In 1794, Congress authorized the construction of the first six warships. These warships became the new United States Navy. Each of the six was built at different seaports along the Eastern coast.

The USS Constitution was built at Hartt’s Shipyard in Boston under the watchful eye of Colonel George Claghorn. The ship was designed by Joshua Humphreys while the bolts fastening its timbers and copper sheathing on the bottom were made by the silversmith and patriot Paul Revere. Construction began in 1794 and the US Navy took delivery of the ship on October 21, 1797. The original cost of the vessel was just over $300,000, inclusive of guns and equipment. 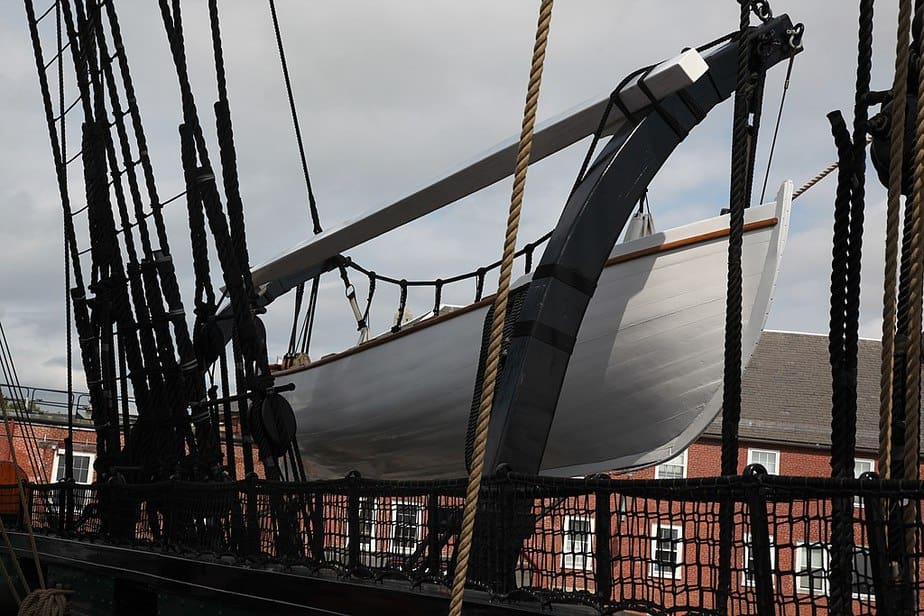 The USS Constitution was an impressive and formidable vessel during its heyday. The ship had a crew of 450 and was rated a 44- gun Frigate, that on any given day had an armament of more than 50 guns including 32 24-pounder long guns; 20 32-pounder carronades and two 24- pounder bow chasers. She boasts 42,710 square feet of sail on three masts and could reach a top speed of 13+ knots.

4. The moniker “Old Ironsides” is given to the Constitution

Hull did not stay in Boston for long, restocking his water and other supplies before setting sail on August 2 for the British convoy lanes around Halifax, then on to Bermuda. On August 19, Constitution spotted a lone British frigate, Guerriere, and moved to engage the adversary. As the Constitution approached, Guerriere fired numerous broadsides, the majority of which missed altogether and rebounded against the American ship’s sturdy oak sides.

According to legend, one American crewman screamed out that the sides were composed of iron, earning him the moniker Old Ironsides. The story is most likely mythical, and the term was most likely coined by florid journalistic descriptions of the conflict later that summer.

Constitution quickly reduced the British ship to a floating ruin, dismasted, holed below the waterline, and immobile. The ships were entwined for a time, with the British bowsprit entangled in the rigging of the Constitution, but the strong waves prevented either side from boarding the other. The British surrendered, which was nearly unheard of in nineteenth-century naval affairs. Hull desperately wanted to carry his prize into Boston, but it was too badly damaged by his gunfire, and the British ship was destroyed.

On August 19, 1812, commanded by Captain Isaac Hull, the USS Constitution defeated the British frigate Guerriere. The British ship fired the first shot of the legendary battle but 20 minutes later it was nothing but a dismasted hulk, so badly damaged that she was not worth towing to port.

6. The ship’s construction and early trips were marred by challenges

Sailing ships were launched with just the lower masts in place, and the upper hamper – topmasts, topgallant masts, yards, and all associated gear – had to be completed before the ship could be considered seaworthy. It hasd to be armed as well.

During the ship’s first trip, the ship’s forty-four guns, thirty 24 pound cannons on the gun deck and fourteen 32 pound carronades on the spar deck above were not accessible. Constitution and other Navy ships were dispatched to sea in May 1798 to safeguard American ships against privateers and naval vessels of Revolutionary France, which was at war with the United Kingdom.

Constitution was obliged to borrow weaponry from the army, capturing 16 cannons from Castle Island in Boston Harbor’s fort.

Because the borrowed cannons were 18 pounders, the amount of metal Constitution could unleash on an adversary’s vessel was far less than it had been meant to be. Despite this, the ship went to sea in July under Captain Nicholson, patrolling the US Eastern Seaboard. The ship won the first prize of its career in August, a ship sailing with a French crew while purportedly being under British instructions. The US government eventually apologized and compensated the United Kingdom. Nicholson came across another British warship that had been seized by the French the following year.

It was a lawful prize for Constitution under the rules of war, but Nicholson released the vessel, presumably befuddled by the politics of the previous event. Throughout the duration of the Quasi-War, the Constitution patrolled alongside other ships of the developing US Navy.

When in 1830 the ship was condemned as unseaworthy and recommended for breaking up, public sentiment was aroused by Oliver Wendell Holmes’s poem “Old Ironsides.” The ship was preserved and its rebuilding was provided for in 1833.

USS Constitution was removed from active service in 1882, and in 1905 it was opened to the public in Boston Harbor. After restoration (1927–31) the ship was recommissioned; although it did not sail under its own power, it called at 90 American ports on both coasts and was visited by more than 4.5 million people.

The USS Constitution sailed under her own power for her 200th birthday in 1997, and again in August 2012 to commemorate the 200th anniversary of her victory over Guerriere.

10. The ship was a success of American design and shipbuilding

The design of the Constitution and her sister ships was groundbreaking and divisive at the time. The frigate design, rather than the bigger and more strongly armed ship of the line, was used by the US Navy for its largest ships. Designer Joshua Humphreys envisioned frigates with larger weapons and more of them than the standard design of the time. He wanted the American frigates to be able to outgun ships of their class and outrun those that were more powerful.

The design sparked debate among conservative shipbuilders, and the building was beset by cost overruns, ushering in yet another US Navy tradition that has stood the test of time. Working with live wood proved to be a challenge. Under the command of US Navy Captain Samuel Nicholson, Boston shipbuilder Edmund Hartt destroyed around 60 acres of trees in the construction of the ship and its lower masts. Paul Revere of Boston fashioned the copper sheathing for the hull.

The majority of the timber used in the ship’s construction came from the marshes of South Carolina and Georgia. The ship was too heavy to slide down the ways when it was ready for launch in 1797. On October 21, 1797, the ship successfully entered the waters of Boston Harbor after three failed attempts.