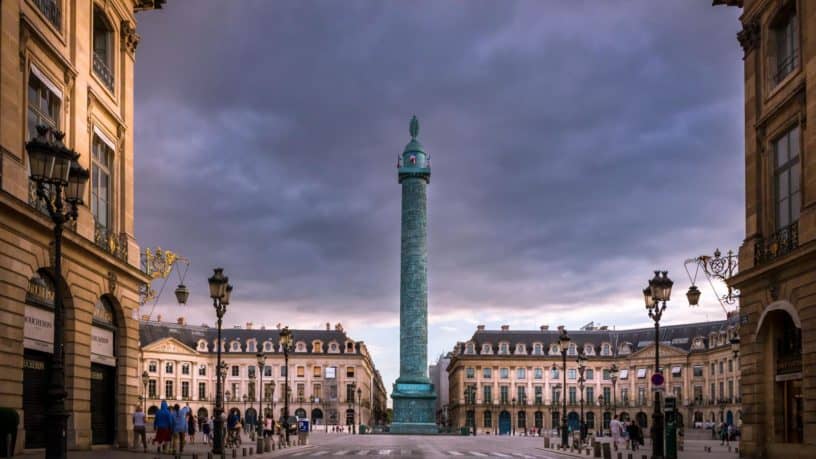 In this article, I will share with you my top 10 fun facts about Place Vendome in Paris! Because, it is one of the most luxurious and prestigious places of the city of Paris!

The Place Vendôme was built in 1686 by order of the French King Louis XIV. Along the decades, the most prestigious French haute couture brands and the finest jewellery houses started owning whether a store or an atelier, under continuous intensive surveillance, at Place Vendôme.

Nowadays, this square is definitely the emblem of the French luxury. If you want to learn more about this majestic place, read on and find out my top 10 fun facts about Place Vendome in Paris!

Fun fact nº1: The most beautiful jewellery in the world are found at Place Vendôme

At Place Vendôme, you will find the most stunning sapphires, rubies, emeralds and diamonds in the world. The last two centuries, the most prestigious jewellers established there. Mellerio, Chaumet, Boucheron are some of the names you will need to remember.

If you love jewellery, shiny pieces, delicate materials and fine designs, you will love walking the Place Vendôme and admiring the vitrines of the jewellery stores. Believe it or not, I can tell you that the most beautiful jewellery in the world are made at Place Vendôme! Each jewellery is pure art and a true masterpiece.

Whether you intend to buy a jewel or for your viewing pleasure, walking the Place Vendôme and admiring the stores displays is a must while in Paris!

> Join our Paris landmarks tour to discover the best jewellery stores and their history.

Fun fact nº2: The first jeweller to establish in the Place Vendôme was Mellerio 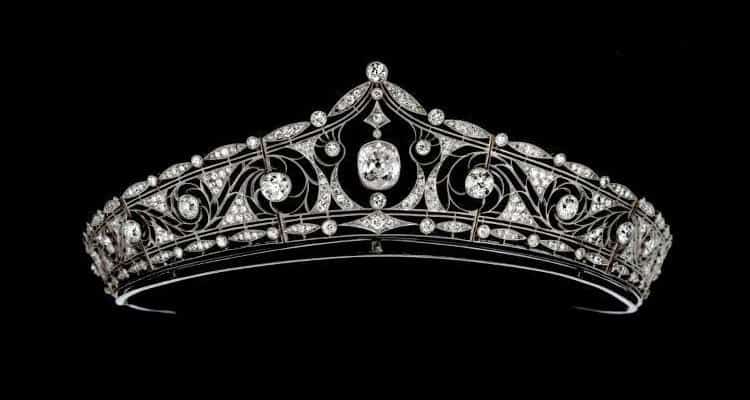 Located at 9 Rue de la Paix, you will find the Mellerio jeweller store. It is just a few steps away from the Vendôme Column. Mellerio opened the doors of his store in 1815. He was the first jeweller to establish his store and atelier in the area. All the crowned heads of Europe used to go to him for jewels.

The Queen Marie Antoinette, the Empress Joséphine, the Empress Eugénie de Montijo, the Queen of Netherlands Emma of Waldeck and Pyrmont were just a few of the royalty members that simply loved the classic and sensual pieces Mellerio created.

Mellerio is the oldest jewellery store of France, which is why you cannot miss this store while in the area! Most jewels worn by the most prestigious members of the court you see in history books and paintings were probably designed and created by Mellerio.

> Read this article to learn more about the French queens. 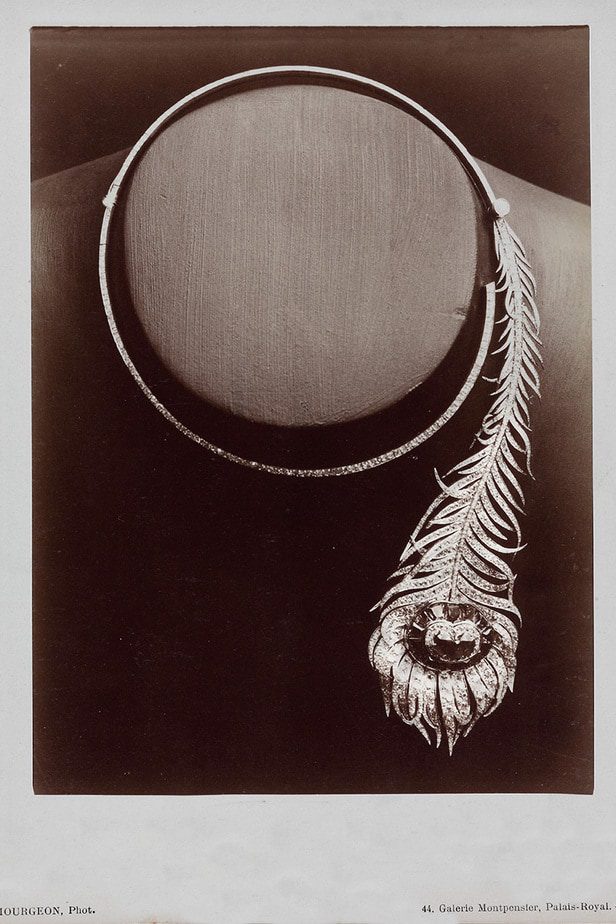 In the nineteenth century, most jewellers were found at the Paris Royal. But Frédéric Boucheron decided to leave the area and opened his store at 26 Place Vendôme in 1893. He was a visionary and very creative. He created innovative pieces that were often copied but never achieved his excellence.

Boucheron invented a unique piece which was much more modern than what people of the time were used to. The “point d’interrogation” necklace was revolutionary, because women didn’t need the servants to put on the necklace. Inspired by the peacock, the jewel was shaped like a question mark. It had no clasp, so the necklace could be easily put on with a simple twist!

Fun fact nº4: At its center, you will find the Colonne Vendôme 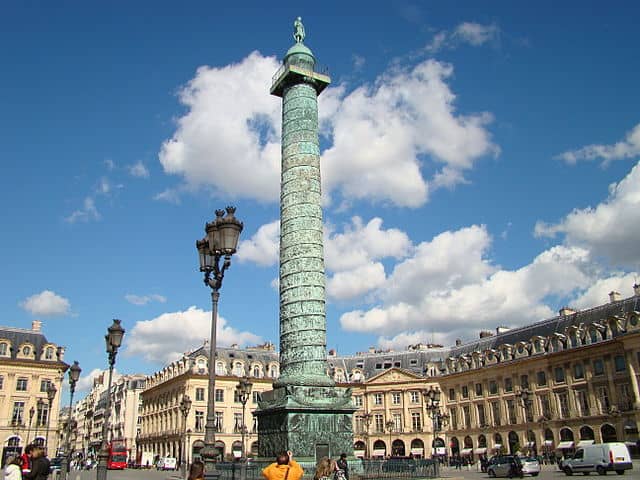 The first column of the Place Vendôme was built in 1699, once the construction of the square was finished. The statue represented the King Louis XIV. But, in 1792, during the Revolution, his statue was destroyed.

So, in 1810, a new column was constructed. The current column makes reference to Napoleon and the Empire. It commemorates the victory of the Grande Armée over the Austrian and Russian troops in Austerlitz in 1805. This column was inspired by the Trajan’s Column in Rome.

Fun fact nº5: All the mascarons of the square are different and were handmade by the same sculptor 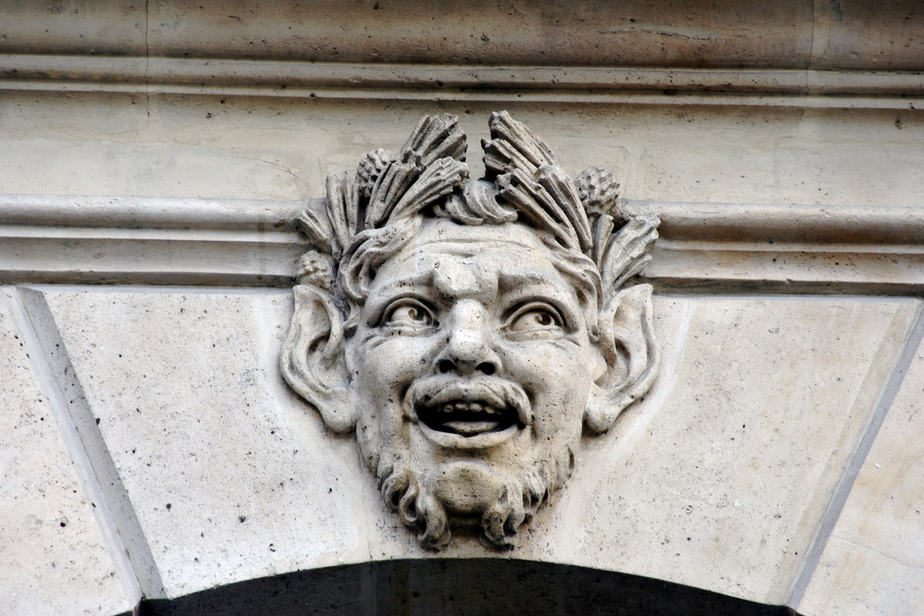 If you walk around the square, have a look at the mascarons! There are 158 arcades, which means there are 158 mascarons. They were all sculpted by the same artist but they are all very different from one another. The mascarons are definitely the details that most visitors miss while in Paris. So, when you come to Paris, pay attention to the mascarons.

Fun fact nº6: The Colonne Vendôme was made with the cannons of the Austrian and Russian armies

The bronze used for the construction of the Colonne Vendôme was made out of 1200 cannons that were taken from the Austrian and Russian armies, after the Grande Armée of Napoleon won the battle in Austerlitz. The bas-reliefs on the column represent the exploits of the Great Army and battle scenes.

Fun fact nº7: It was the favorite place of many important figures 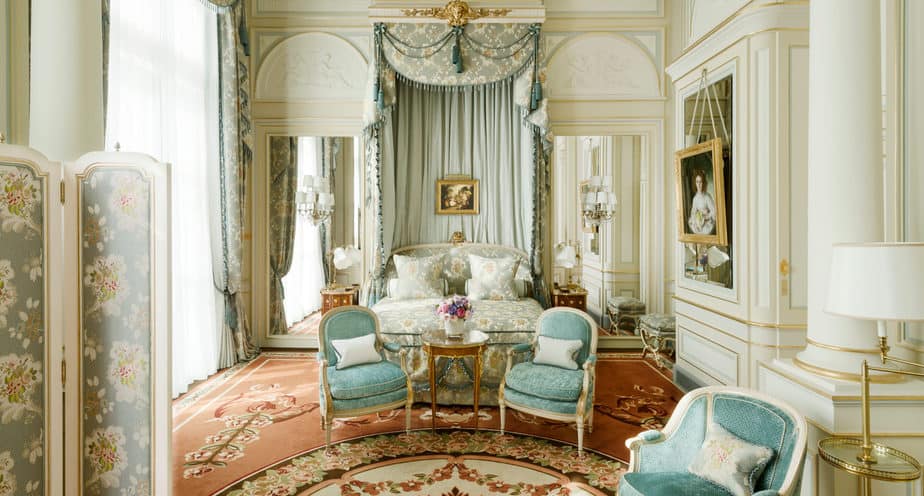 The Place Vendôme has always been praised by many. One specific place has won many hearts: the five-star Hôtel Ritz. Over the years, it has received the most distinguished customers, such as Ernest Hemingway, F. Scott Fitzgerald, Charlie Chaplin and Coco Chanel. Some of the suites even got named after the most prestigious guests.

For more than thirty years, Coco Chanel lived in the Hotel Ritz. She died in her suite in 1971. This place was very dear to her heart. So, the hotel named the suite after her, and kept all the decorations she brought in and all her personal items. If you’d feel like spending a night in the Coco Chanel suite, it would cost you more than 18 000 euros.

> Find out more about Coco Chanel.

Fun fact nº8: Lady Di had her last dinner at the Ritz 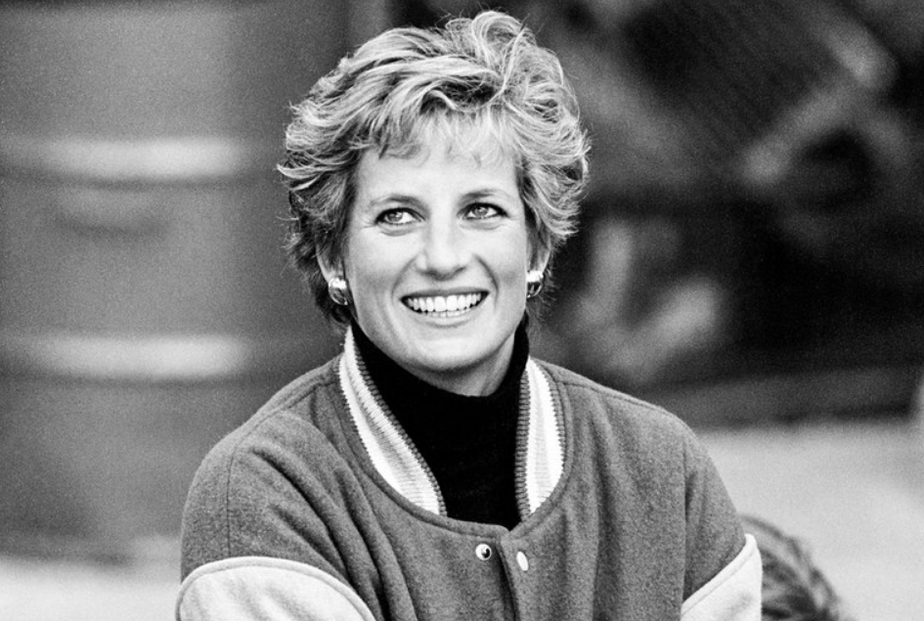 On August, 30 of 1997, Diana, Princess of Wales, and her lover, Dodi Al-Fayed, were dining in the Imperial suite at the Hotel Ritz. Later that night, they left the hotel in a car and suffered a tragic car crash that took their life away. The accident happened on the Pont de l’Alma in Paris.

> Read our article about the best Parisian bridges.

Fun fact nº9: Mansart is the architect of the Place Vendome 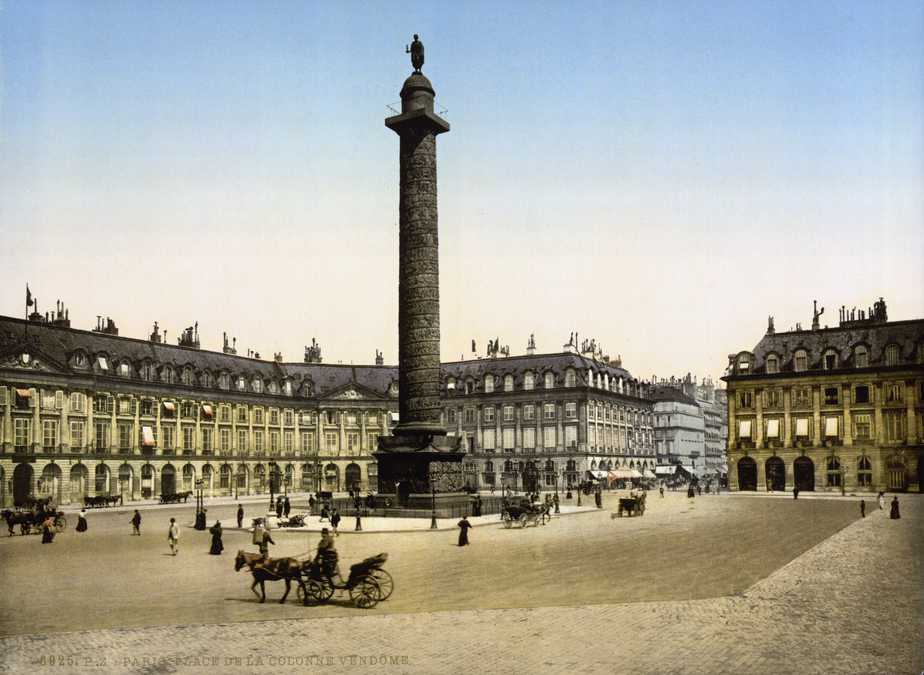 Jules Hardouin-Mansart is the man behind the design of the Place Vendôme. When walking around Paris, you will find other places designed by him. For instance, the Place des Victoires that both belongs to Paris first and second district. Mansart is also known for some remarkable projects at the Palace of Versailles. He participated in the Galerie des Glaces, the Orangerie, and the Grand Trianon.

Fun fact nº10: It’s one of the highlights of the city of Paris 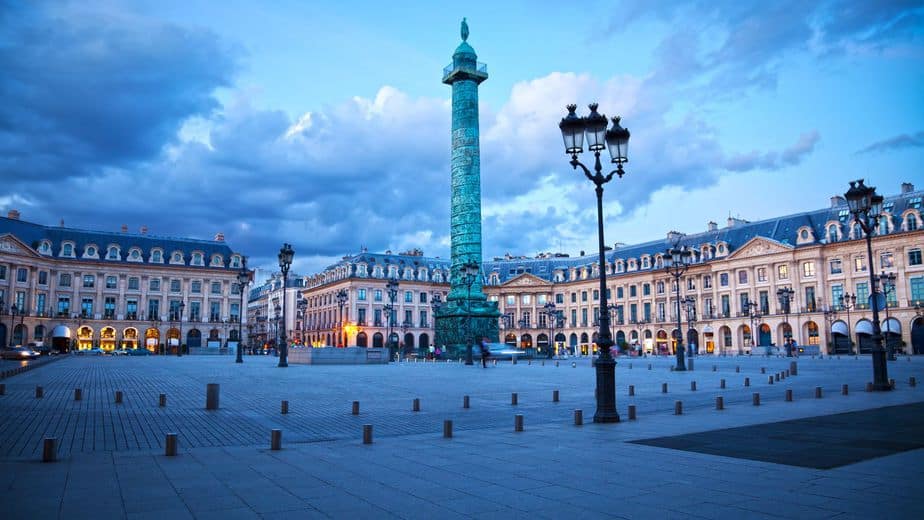 While in Paris, the Place Vendôme is an unmissable highlight of the city. When you visit Paris right bank, you should definitely take the time to walk the area and appreciate all the details the square has to offer. If you want an even more authentic experience, join our Paris landmarks tour. Our local guide will make sure you enjoy the area and truly understand its history. All the facets of the Place Vendome will be revealed to you!

I hope you’ve enjoyed my top 10 fun facts about Place Vendome in Paris! While in the city, if you happen to find out more facts about this majestic square, feel free to share them in the comments, so we can grow as a community and learn from one another. Don’t hesitate to contact us if you need further information about anything. I hope to see you soon in one of our tours!