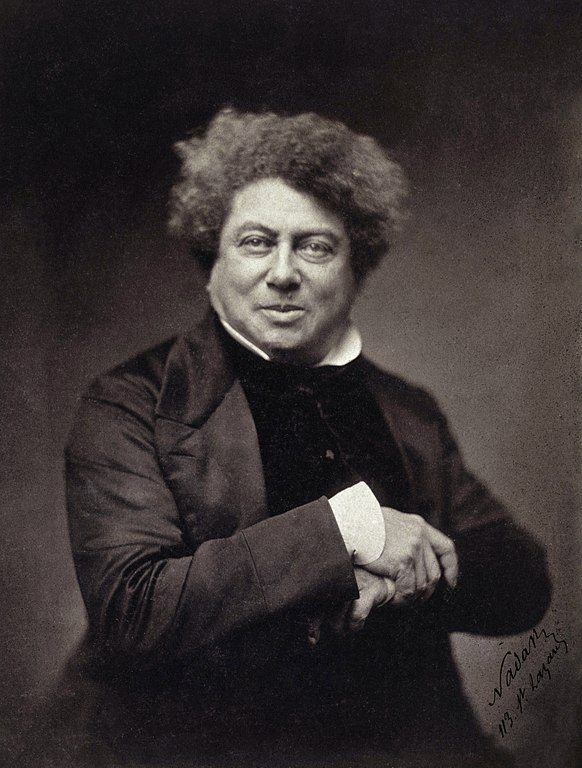 So many talented writers have come out of France. Today, I’m going to be telling you a little bit more about Alexandre Dumas in particular!

Dumas was born in 1802 in northern France. His full name is Dumas Davy de la Pailleterie, but he changed it to simply Alexandre Dumas when he was older. Dumas is an homage to his grandmother’s last name.

Dumas began working as a scribe for the future King Louis Philippe, the duc d’Orléans, when he moved to Paris in 1822, and he soon moved on to writing books and plays. He wrote and put on his first play when he was 27 years old.

This was just the beginning of this French écrivain’s interesting and exciting life! Keep reading for my top 10 fun facts about Alexandre Dumas.

1. Alexandre Dumas was a famous writer 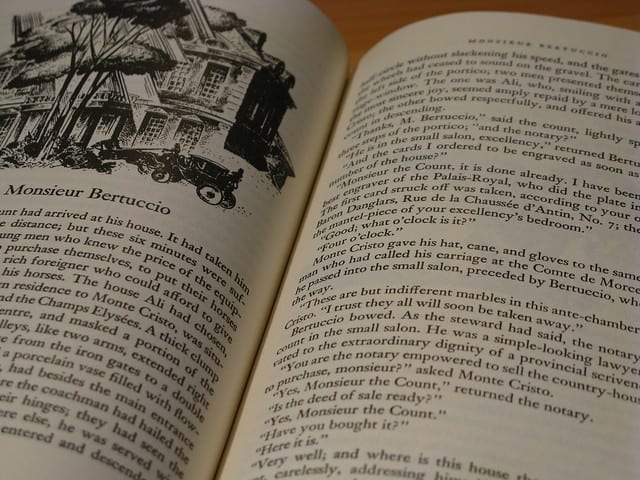 Alexandre Dumas – The Count of Monte Cristo by Richard – Flickr

When Dumas was still working as a scribe, Dumas began working on his first play. It was called Henry III and His Courts. The French public loved it, and so he soon began working on another. His second play, Christine, was also a hit, and after the success of the 2 plays, Dumas was able to quit his job and work as a writer full time.

Dumas may have written plays, but he is perhaps most well known for his novels. He is the author of the famed stories The Count of Monte Cristo and The Three Musketeers. Although these 2 books are his most famous, Dumas penned 100,000 pages over his lifetime! This included his plays, novels, magazine articles and a few travel books.

Dumas really liked to keep busy, apparently! He is considered to be one of the most widely read French authors in the world. Many of his works have been translated from French into various languages, which is probably why many of you have heard of him! 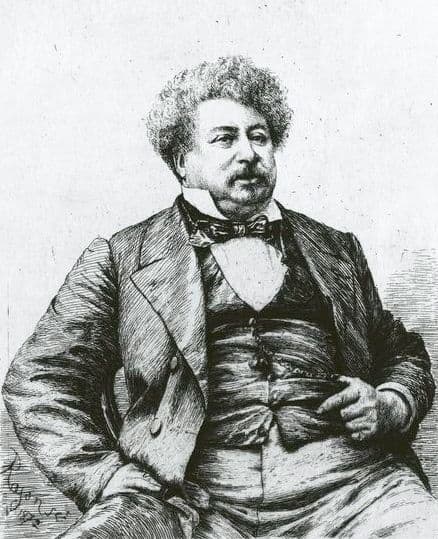 If you consider the sheer volume of work Dumas completed over his career, it makes sense that he used the help of ghostwriters! A ghostwriter is someone who writes material for someone else, and is usually not credited.

But, apparently Dumas came into conflict with one of his ghostwriters. Auguste Maquet did a lot of work to help Dumas on many of his books and plays. After a while, Maquet got fed up with being behind the scenes, and wanted Dumas to start listing him as his co-author.

Maquet went so far as to sue Dumas and take him to court for the misunderstanding. However, Dumas still refused to put Maquet’s name on his novels, choosing instead to pay him a large settlement.

3. Alexandre Dumas wrote a series of novels about Marie-Antoinette 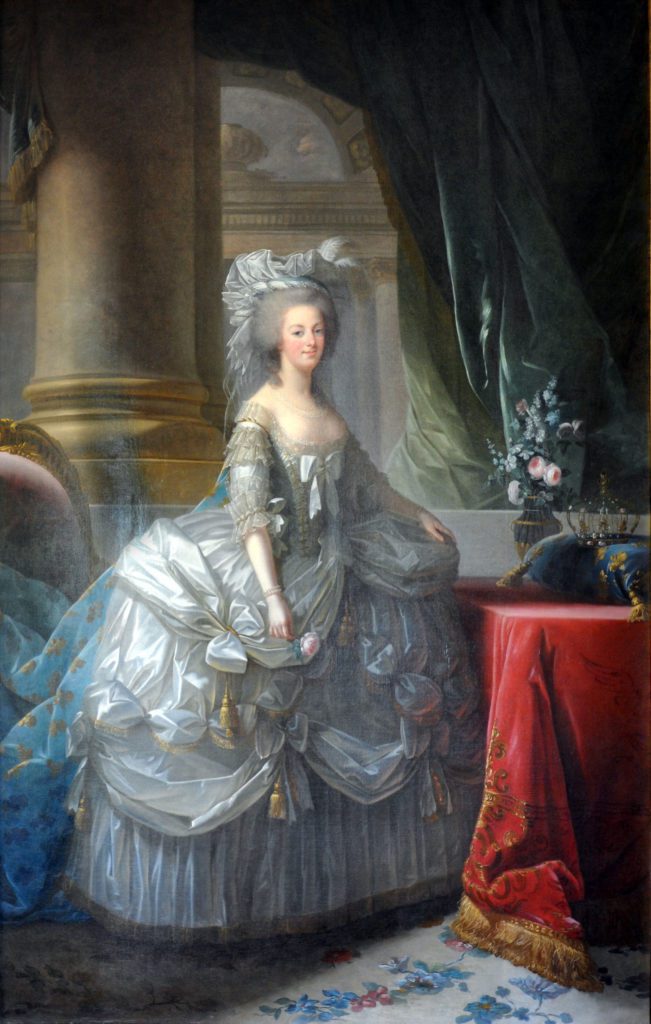 Marie-Antoinette was a French queen that you’ve probably all heard of. Her husband was King Louis XVI, and during the French Revolution, the two monarchs both met their fate with the guillotine.

Marie-Antoinette has become quite the celebrity over the years, and many novels and biographies have been written about her. Dumas wrote 8 fictional romance novels about the queen’s life! These books are pretty hefty: the unabridged version consists of 100 chapters! If you feel intimidated by all of that reading, you’re in luck, as the abridged version contains just 50 chapters.

The most famous book in the series is called The Queen’s Necklace, and was published in 1849.

4. Many of Alexandre Dumas’ characters are based on his father 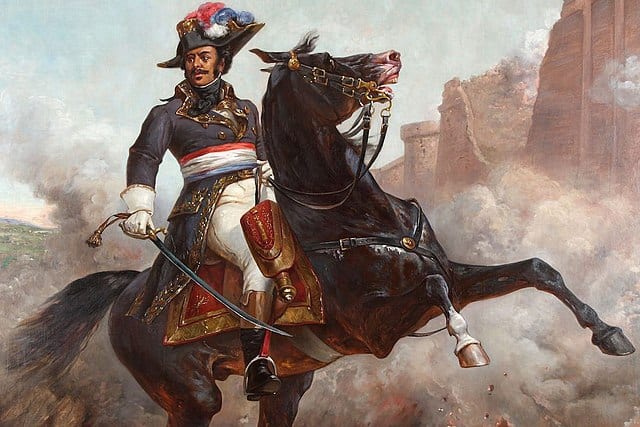 Dumas’ father was the illegitimate son of a French count and a Haitian slave woman. He was born in Haiti, and then his father brought him to France to raise him. Dumas’ father, Thomas-Alexandre, was a military man, and a celebrated war hero at that! He was also the first Black man to ever be promoted to general in a European army at the time.

Thomas-Alexandre was revered in France for his military achievements. Dumas was proud of his pops and all that he had done for France, and he showed his appreciation by writing him into many of his stories.

Dumas’ father lived a full and exciting life, inspiring his son to create similar fearless and flamboyant characters. He was also aware of how rare it was for a Black man to be so  successful in the military. He often created characters that came from diverse backgrounds, just like his dad. 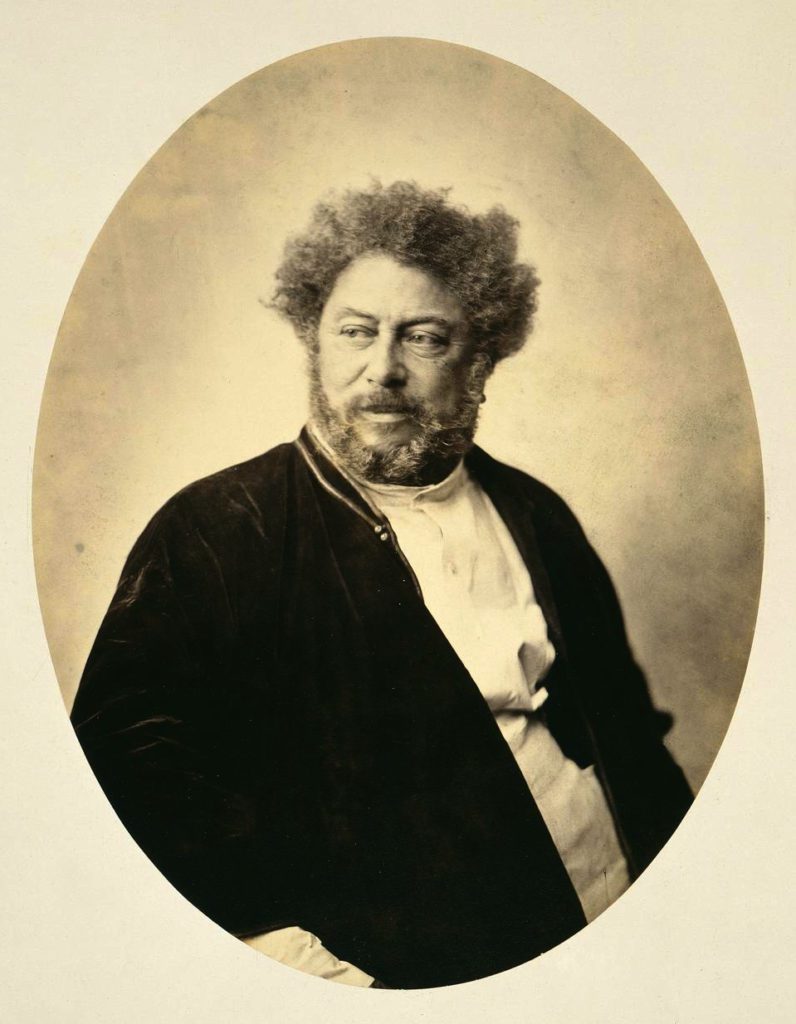 I’ve already mentioned that Dumas’ father was the child of a French count and a Haitian slave. Because of his diverse heritage, Dumas was very aware of racism and the negative effects had on humanity.

He was very vocal about his dislike of slavery, and he even wrote a book about racism called Georges. The plot of the novel could have been based on his own life: it tells the story of a man named Georges, who is the son of a biracial father.

The novel also touches on the negative effects of colonialism and racial discrimination, something that was rarely written about in the 19th century.

6. Alexandre Dumas reportedly had up to 40 mistresses 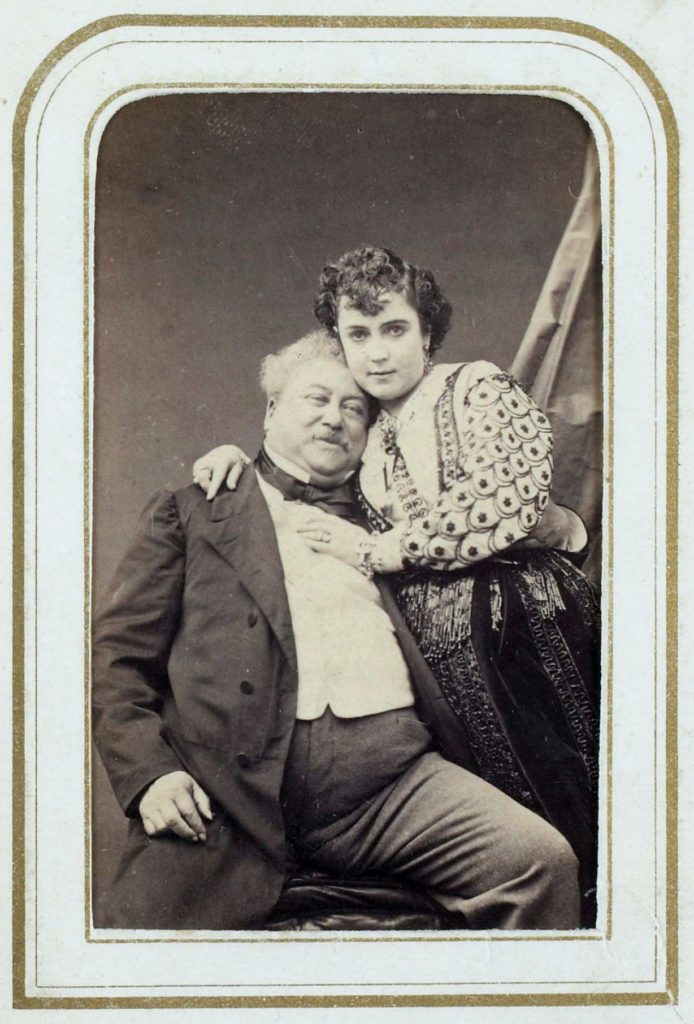 This is probably my least favorite fact about Dumas, but it needs to be mentioned. Dumas was a famous womenizer, and he supposedly had up to 40 different mistresses over his lifetime.

Dumas married an actress named Ida Ferrier in 1840, but this didn’t stop him from pursuing many affairs. Some of his most famous mistresses include Adah Isaacs Menken who was an American actress, and Lola Montez who was an Irish dancer.

Thanks to the scholar Claude Schopp, his other mistresses were discovered along with 3 other unknown at the time children! 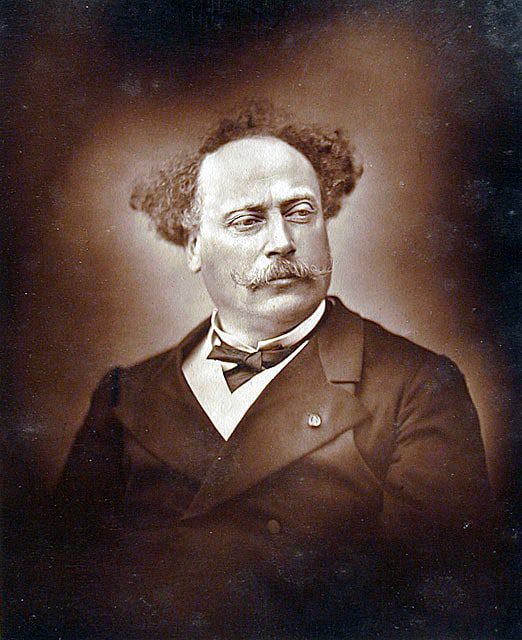 Biographers know for sure that Dumas fathered at least 4 illegitimate children through his many liaisons. They are as follows:

Plus, the other 3 children that School discovered. Dumas was so notorious for his affairs, that many people in France joke that “Alexandre Dumas could be my grandfather!” 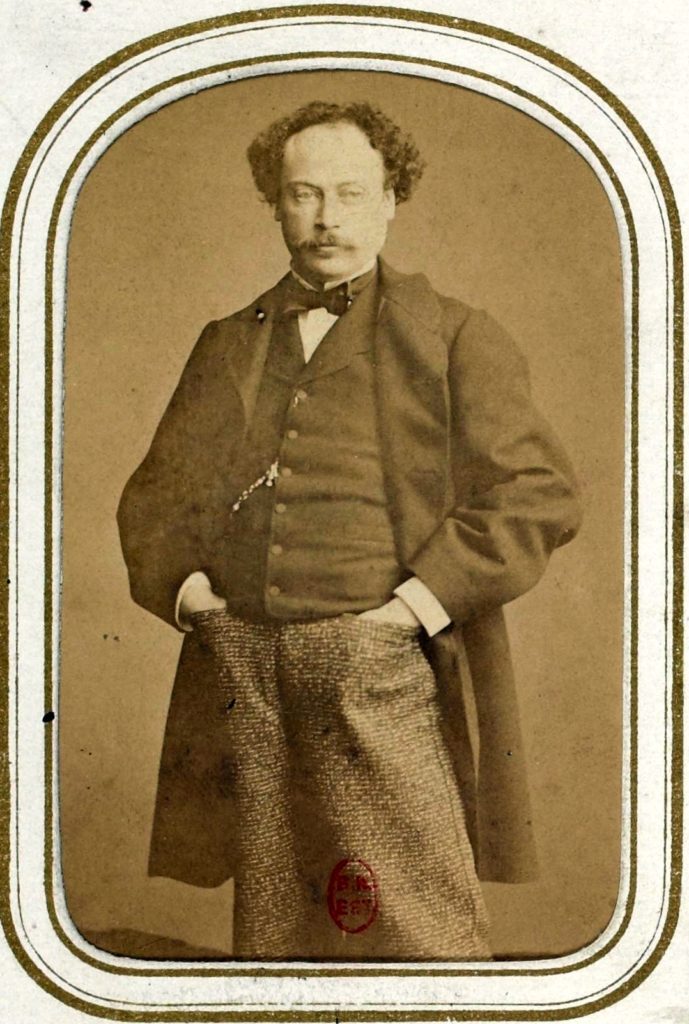 Sometimes, the word père is added to Alexandre Dumas’ name. This is because his son, Alexandre Dumas, fils (fils means son in English), was also a celebrated writer!

Dumas, fils was born in 1824, and in 1831 Dumas, père legally recognized him as his son. His mother was a dressmaker named Marie-Laure-Catherine Labay. His father wanted the best of the best for his son, and ensured that he received the best education available at the time.

The great schooling worked, as Dumas, fils was a very successful author in his own right. He is most well known for the novel, La Dame aux Camélias (The Lady of the Camellias in English).

He maintained a solid relationship with his father his entire life. 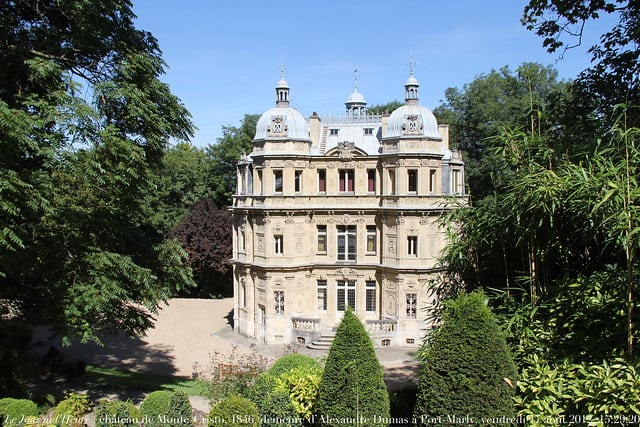 Thanks to the success of his novels and plays, Dumas was a very wealthy man at one point in his life. So, what do you do with a big pile of cash you’re sitting on? Well, buy a castle, of course!

Dumas bought a castle in the Yvelines department of France, which isn’t very far from Paris. He named it after one of the most famous of his characters, the Count of Monte-Cristo, calling his castle the Château de Monte-Cristo.

Dumas was known to entertain many guests at a time, and soon enough the price of all of the guests and parties caught up to him. He lived in the castle for just 2 years before he was forced to sell it. 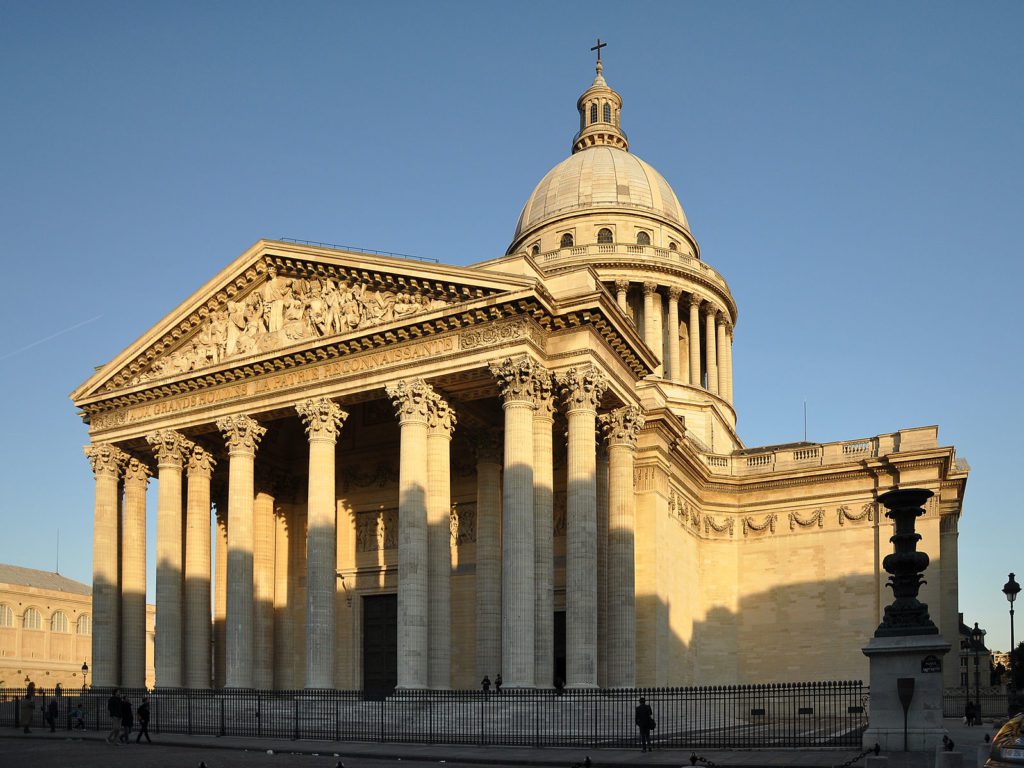 The Panthéon in Paris by Moonik – WikiCommons

Like many great French authors, Alexandre Dumas is buried in the Panthéon in Paris. The Panthéon is a massive mausoleum located in the Latin quarter in Paris. It was once a church, but was eventually turned into a place to bury notable French citizens.

Dumas wasn’t originally buried in the Panthéon, and many people cite racism. This changed in 2002 when French president Jacques Chirac had a ceremony to celebrating the fact that he would finally be laid to rest where he belonged, next to other authors like Victor Hugo and Émile Zola.

I hope you enjoyed reading this article and learning more about the prolific French writer, Alexandre Dumas! He led an interesting and full life, that’s for sure. If he wasn’t a known womanizer, I definitely would appreciate him more. That being said, I do love his work!

If you want to learn more about other famous French personalities, why not tour Paris with us? You’re sure to love our locals guides, and discover a lot along the way! Click here to learn more.