Posted by Tsvetomir Todorov on December 4, 2019 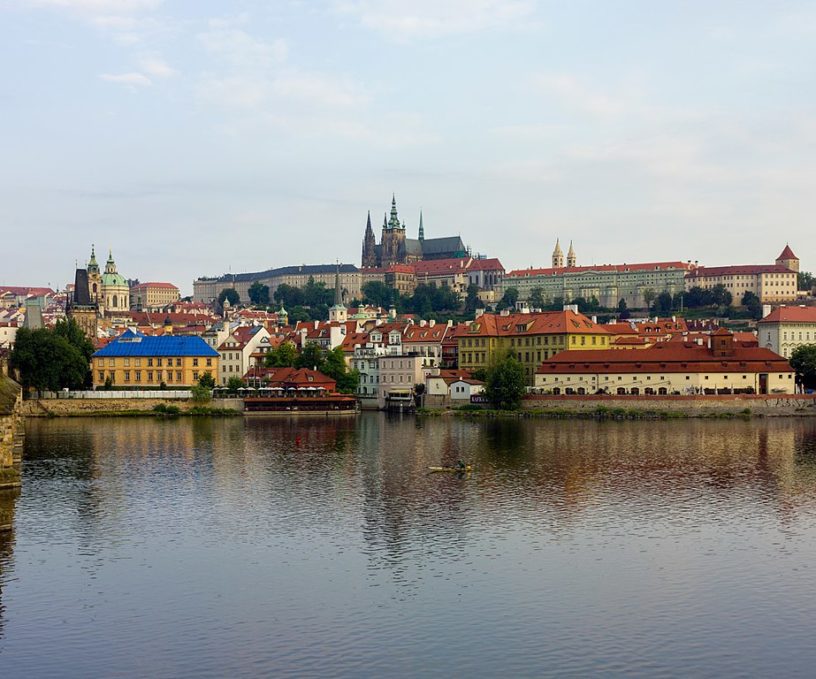 Gold plated, carefully designed, medieval, elaborately ornamented, soaked in history and symbolism – Prague is rightfully dubbed the crown of the Czech Republic.  Just as rightfully so, Prague Castle is the jewel of that crown. Grand and imposing, it watches over the city with its sharp towers, Gothic curves and golden spires. It is a sight to behold, but it is also a silent bard – its walls echo with stories, legends and historic events from more that date back more than a millennium.  Today we are going to examine this marvelous castle as something more than a pretty building. Let us dive in in the 10 most interesting facts about it! 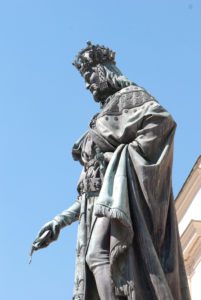 What describes castles better than “a seat of power”? Prague castle has been the home to many kings throughout the years.  Founded some time around 880 AC by Bořivoj of the Premyslid dynasty, the castle (Pražský hrad in Czech) has seen its fair share of regal personas.  Around the 10th century it became a seat for the Czech crown princes and around the 14th century, all the way to the 17th, has been the home of the kings who ruled Bohemia. 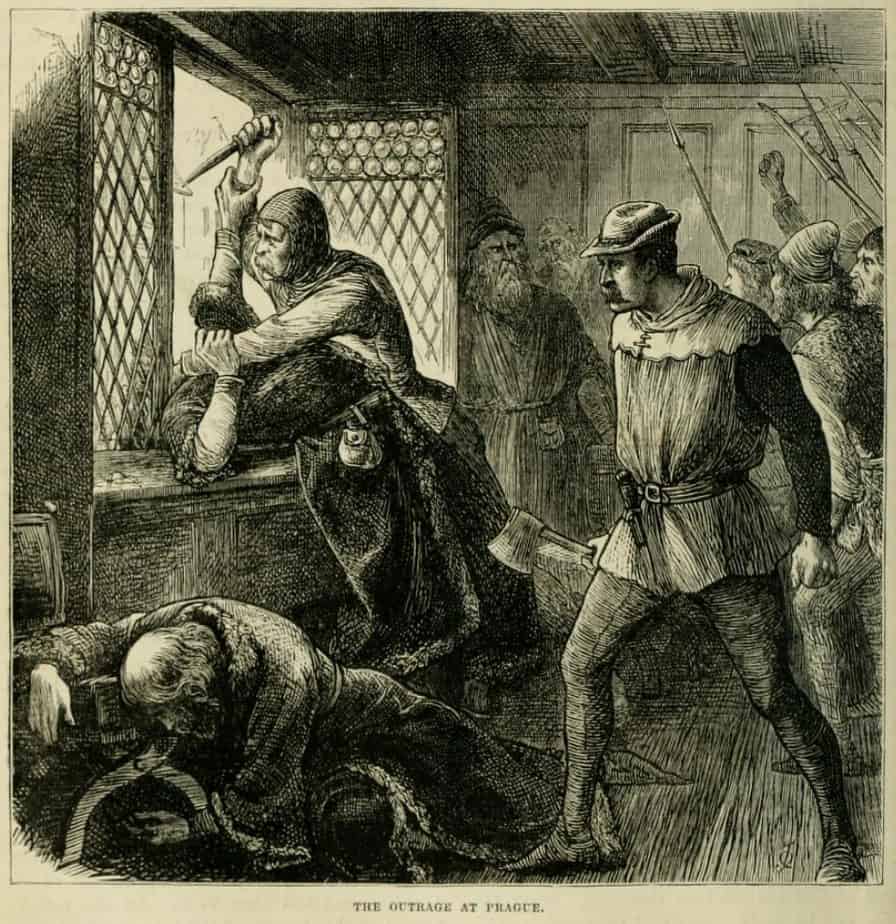 Have you ever heard of the word “defenestration”? It literally means to throw someone out of a window! I bet you didn’t expect to hear something like this in an article about Prague, but as it turns out it was exactly because of the events here that this term was officially patented.

It happened in 1618, just after the Catholic church had cracked down on Protestant chapels. This didn’t sit well with the protestants, who called for (and won) a trial for their religious freedom.  Not only that, but also the Catholic regents from the Vatican were found guilty of violating said religious freedom. The hot headed protestants did not wait for the judge to offer a sentence, choosing instead to throw the priests outside of the window. Luckily (and hilariously), there were piles of horse manure to soften their fall. The incident quickly gained popularity and cemented the word “defenestration” in the dictionary.

Funny enough, two more defenestrations happened. I won’t go into detail, but let’s just say they involved a lot less manure and a lot more dirt. Officially there is three of them, unofficially there are many more – for some reason medieval Bohemians seemed to favor that as a method of execution.

3. Kings may be great, but emperors are the real deal 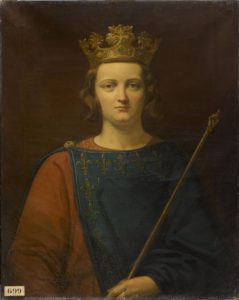 We already learned that Prague castle was the seat of power for both princes and kings through the centuries. But I can one up that fact – during the reign of the great Charles IV (1346-1378)  the place was the official seat of the Holy Roman Emperor.  This, to me, is the greatest period of the castle’s long history.  During that time the Royal Palace that tourists enjoy so much was rebuilt and the beautiful St. Vitus Cathedral began construction. This is also when the French-inspired Gothic ornaments were introduced.

A few centuries later another emperor claimed the castle as his home – namely, emperor Ferdinand V. He was the ruler of the Austrian Empire which back then (1848) included truly a lot of lands. Just to give you an idea: Ferdinand was also a president of the German Confederation, a crown king of Hungary, a king of Croatia, a king of Bohemia,  and a king of Lombardy–Venetia. As the saying goes “it is good to be king”, I can’t help but wonder how good it is to be several.

The castle boasts four churches: the famous Vitus Cathedral, which has always been the seat of the Prague Archbishop, St George’s Basilica (which is the oldest building within the premises that still stands,) All Saints Church and the Holy Cross Chapel.

To fit the four churches, Prague Castle also has four palaces: the Old Royal Palace, Belvedere, Lobkowicz and New Royal Palace. They were consecutively built throughout the long history of the place, with the most splendid ones finished during the reign of the Holy Roman Empire and the Austrian Empire. 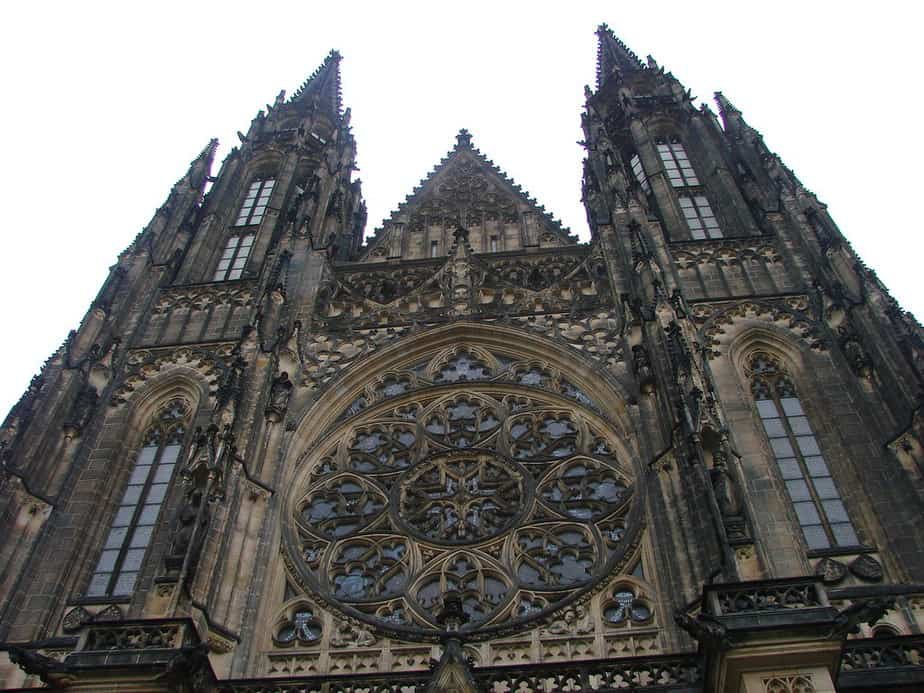 A common misconception is that St Vitus IS the Prague castle itself, as it is the most prominent  building. It towers over all the rest and is visible from afar.  However, it is merely a part of it – the whole castle is an elaborate complex that involves yards, living quarters, churches, fortresses, walls and government buildings.

Nonetheless, to me St Vitus is still the soul of the place. it was built by Charles IV, although the construction began all the way back at 1344 and took nearly six (!) centuries to reach its completion in 1929. It is truly a masterpiece of both the Renaissance and Gothic movements, which hold great treasures and art both on the outside, with its twirling ornaments and masterfully carved doors, and on the inside, with beautiful glass paintings, works of art, altars and historic artifacts.

Prague castle is listed in the Guinness Book of Records as the largest ancient castle in the world. It takes over the impressive area of nearly 70 000 square meters, with 570 meters in length and around the average of 130 meters wide. 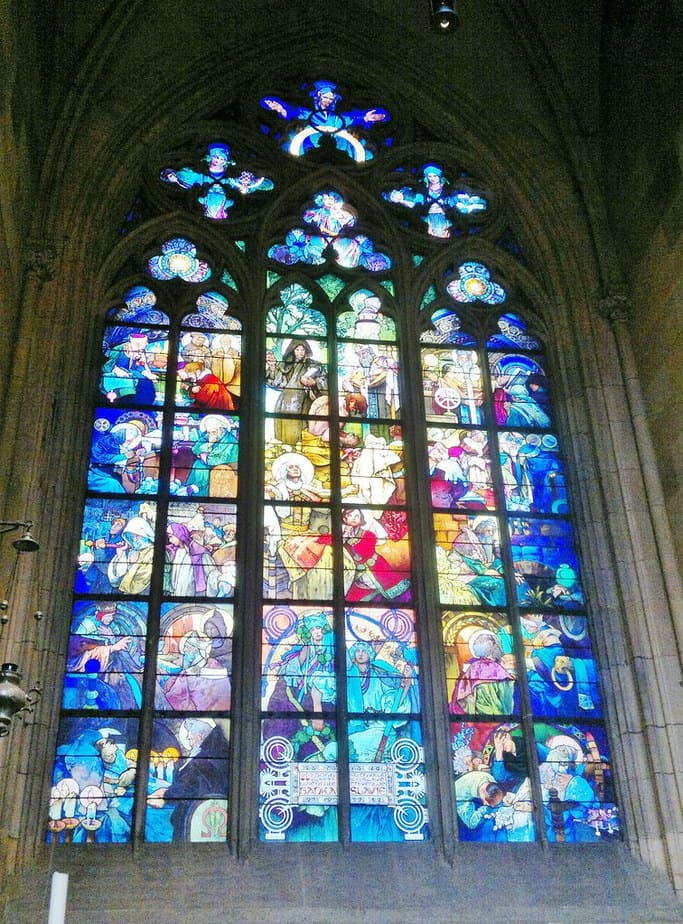 What is a castle without creepy legends that seem to have a grain of truth?

Just hear this story: in the time of the Nazi Occupation during WW II, Prague Castle became the seat of power for the Reich’s protector of Bohemia and Moravia, Reinhard Heydrich. It is said that, enamored by the splendor of the place, he liked to put the crown on his head and pretend to be the real king of the land. Well, the legend says that if an usurper places the crown on his head, he would die within the year.

And what do you know – less than a year after usurping the power, Heydrich fell victim to an ambush organized by Slovak and Czech rebels, while he was on his way to the castle. His wounds got infected and he died a week later. Also in line with the legend, the curse reached his son Klaus, who also died next year in a traffic accident.

A fair warning to all the potential conquerors of the Czech lands, wouldn’t you say?

8. No thief can get to the crown jewels 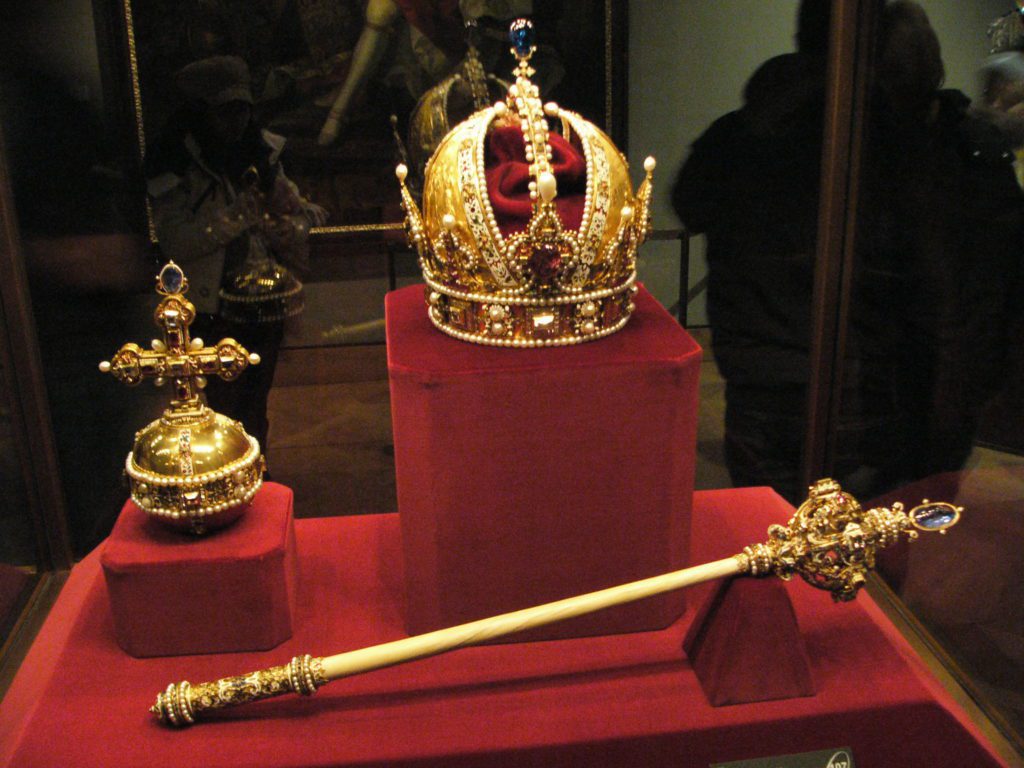 When I tell you that the crown jewels are secure, I mean that they are RIDICULOUSLY secure.

They include St. Wenceslas’ crown, the royal scepter and the coronation cloak. All of them are closed behind the chamber door and then in an iron safe with seven locks. The keys to those are held by seven people, among which are the president, the prime minister and the Archbishop. The only way to get into the safe is to have all the seven keys. I really hope our readers will view that information as a deterrent rather than as a challenge!

The jewels are on public display at the discretion of the president, who usually allows them to be on an exhibit every five years. Of course, this involves getting all seven key holders to Prague.

9. A part of the place is tropical

During the 16th Century, Rudolf II decided that he needs a garden of tropical plants on the premises.  As he was the Holy Roman Emperor at the time, his wish was basically as good as fulfilled the moment he thought of it. The garden was well maintained and involved citrus fruits. To this day the garden is maintained and even upgraded to a glass-enclosed greenhouse that was built in 1999. 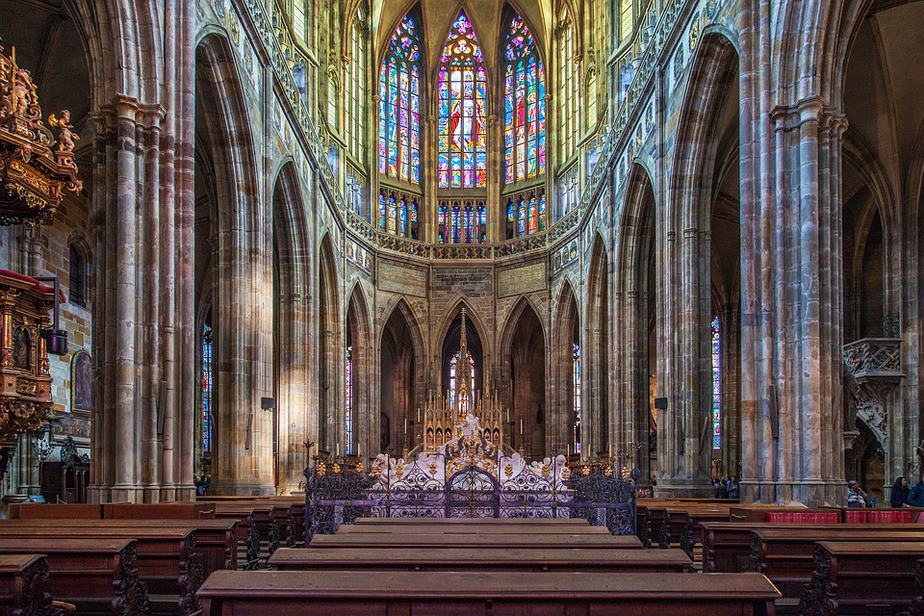 It should come as no surprise that the Prague Castle is also a holy place. The famous St Vitus Cathedral hosts the most beautiful church treasury in the country. Among the riches is the arm of Saint Vitus himself. He was a Sicilian martyr who died during the Christian persecutions of the Roman Emperors Diocletian and Maximilian (they were ruling together) in 303 AC.

What is interesting about this saint is that later, when Christianity spread through Europe, Germanic and Latvian people honored Saint Vitus by dancing around his statue. This gave him a reputation as a patron of dancers and entertainers. He is also the saint of epileptics and it is said that he protects against lightning.

Prague castle is the top destination in Prague, which any traveler must visit. It has everything an adventurer might want – impenetrable walls, Gothic statues, a treasure locked with seven keys, a medieval curse, a saint who protects against lightning and much, much more.  I cannot recommend you enough to get the full tour and enjoy every single aspect of this beautiful place. I haven’t included in this article a lot of the secondary, yet definitely not unworthy things that you can see there. Take for example the Golden Lane – one of the most beautiful streets of Prague. But more on that later – for now, be sure to check out our tours and let us help you plan your perfect trip to Prague!