Top 10 Artworks to Hunt Down in Paris 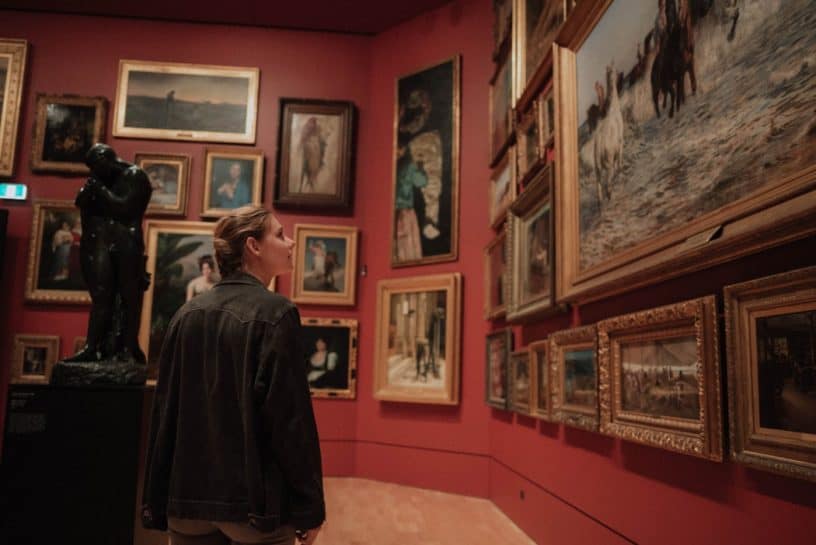 Top 10 Artworks to Hunt Down in Paris

If there’s one thing Parisians pride themselves on, its art. This pride extends from their vast collection of museums all the way through to the local born artists who created the works that fill them.

While not all of the greats can claim French nationality, many made the choice to relocate to this eclectic city and to make it their base for creating art.

They found the city exciting and inspiring; much to see and learn & in turn, create with. Despite being Spanish born, Salvador Dali spent much of his career based in Paris.

Paris today is still the number one destination on every struggling artists list. Many long to see and feel for themselves what the great creators did back in the day — & some of the contemporary names still do today. Perhaps it is a romanticized way to think of the city… perhaps it is entirely accurate. 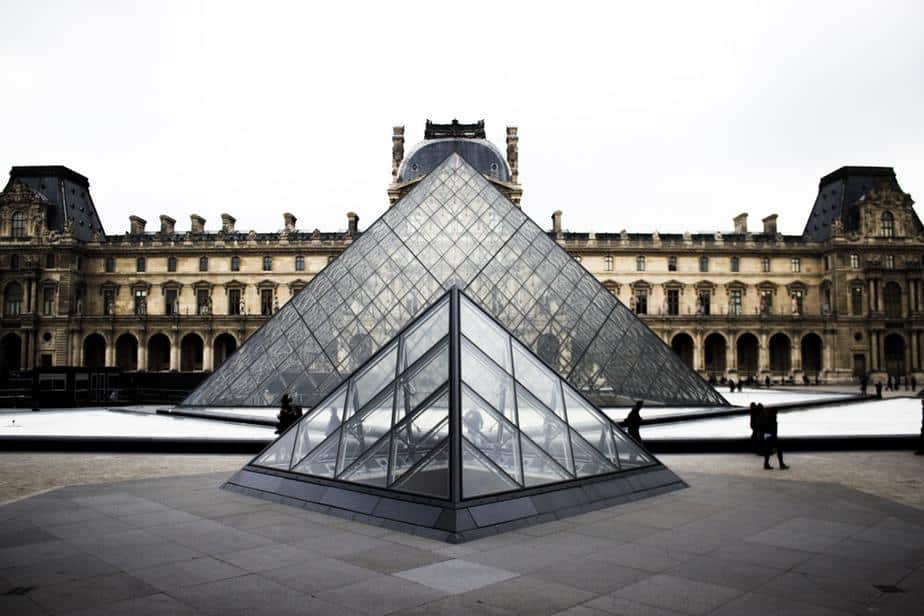 There are 73 private and public museums in Paris. Each one boasts an unfathomable collection of artworks ranging from paintings, sculpture, preserved manuscripts and artifacts, ornaments, furniture, photography — the works.

Within the walls of some of these museums are a handful of the greatest pieces of art known to humanity. What could be more fun than meandering the corridors of these historic buildings and hunting a few of them down?

Here are 10 unmissable artworks that you simply must go find while you’re visiting this global artists hub.

The obvious choice to start this list, yes. Nevertheless one simply can’t be in Paris and not pay a quick visit to our favorite girl, Lisa.

Im sure you’ve heard the rumors: “It’s so tiny”, “It’s not that impressive”, “You can’t get close to her”, “It’s definitely not the original”. I say; why don’t you go and see for yourself? I guarantee that only one of the listed rumors is true… 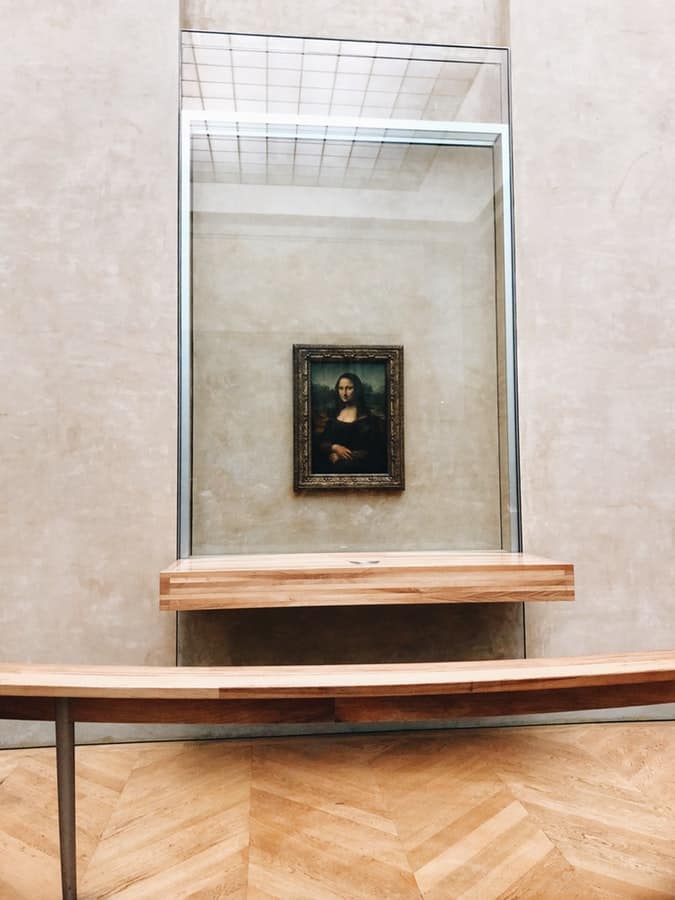 Da Vinci worked on this piece between 1503 and 1517. In 1797 the painting was added to the permanent collection of the world famous Louvre Museum in the 1st arrondissement. It has been the main attraction to the space ever since, and is possibly the most famous painting in the world.

What makes this piece so interesting is the untold mystery of the smirk on the face of the woman, Lisa Gherardini. She was also depicted void of eyebrows, which was another unexplained decision made by da Vinci.

The 1st arrondissement is a great neighborhood to view via a free guided walking tour. The Louvre is but one of the impressive attractions in the district.

The harlequin is a subject that was explored many times by Picasso throughout his painting career. This particular one was competed in 1923, and is my personal favorite.

It can be viewed at the The Centre Pompidou in the 4th arrondissement along with a few other beautiful Picasso works. The harlequin housed at this museum was actually a portrait of Picasso’s close friend, Joaquín Salvado. 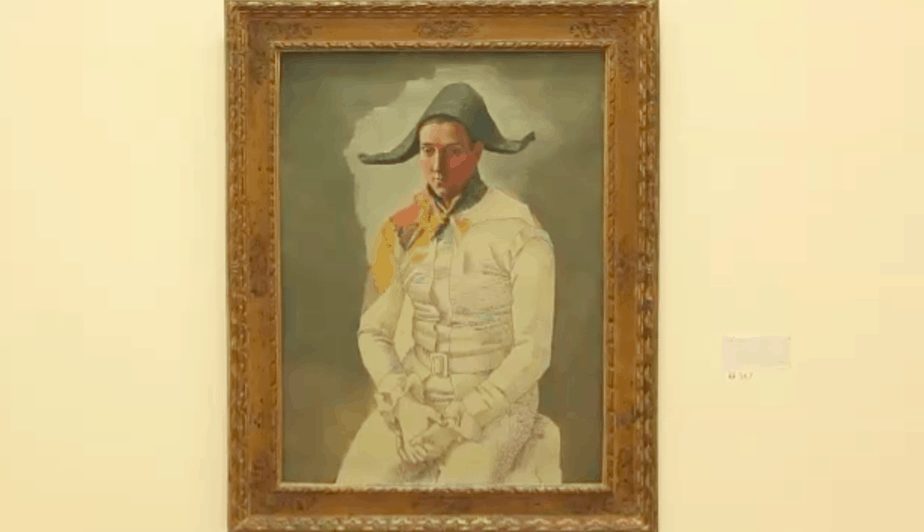 Picasso’s Arlequin – by The Centre Pompidou – Sourced from their website

It is an exquisite piece to examine in person. Half drawn onto the canvas and the rest painted. This is one of Picasso’s more avant-garde works created in a post-war Paris.

The museum itself is an exquisite space and the lobby is free to enter. You’ll have to pay to get access to  all of the main collections.

The Musée Jacquemart-André is a private museum situated in the 8th arrondissement. It is actually the former home of Édouard André and Nélie Jacquemart and features all of the elaborate artworks that they collected during their lives together.

The space is utterly magnificent. The epitome of the French bourgeoisie throughout the ages. You can imagine the tone of the house if the owners were able to afford a casual Rembrandt original from the 1600s. 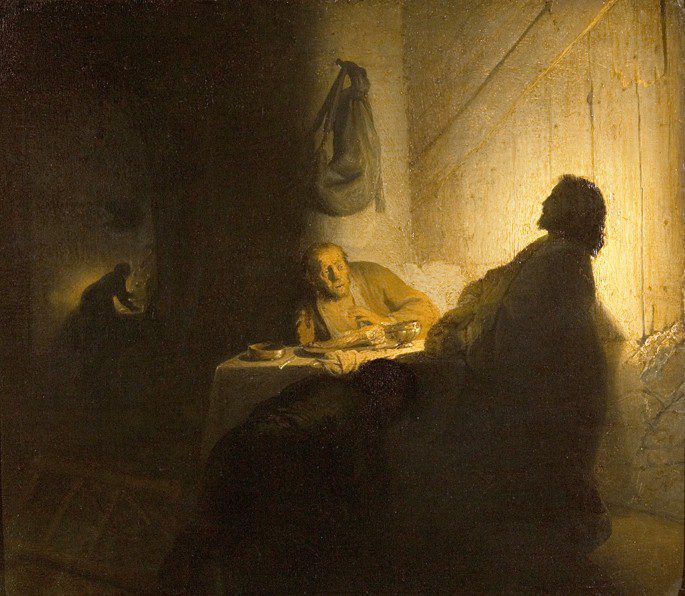 The house is home to one of Rembrandt’s finest pieces depicting Jesus identifying himself to two pilgrims in the town of Emmaüs; the Les Pèlerins d’Emmaüs.

It is an interesting and mystical representation of this supposed event in history. I am always in awe of paintings that are able to reflect candlelight so accurately.

This is one of Rembrandt’s earliest works but is considered to be one of his best. Paris is lucky to have this piece considering that the artist was actually Dutch.

Situated right on the bank of the Seine is the wonder that is the Musée d’Orsay. This space is probably considered the most famous museum in Paris after the Louvre. Within its walls are many artworks that draw tourists in by the thousands. 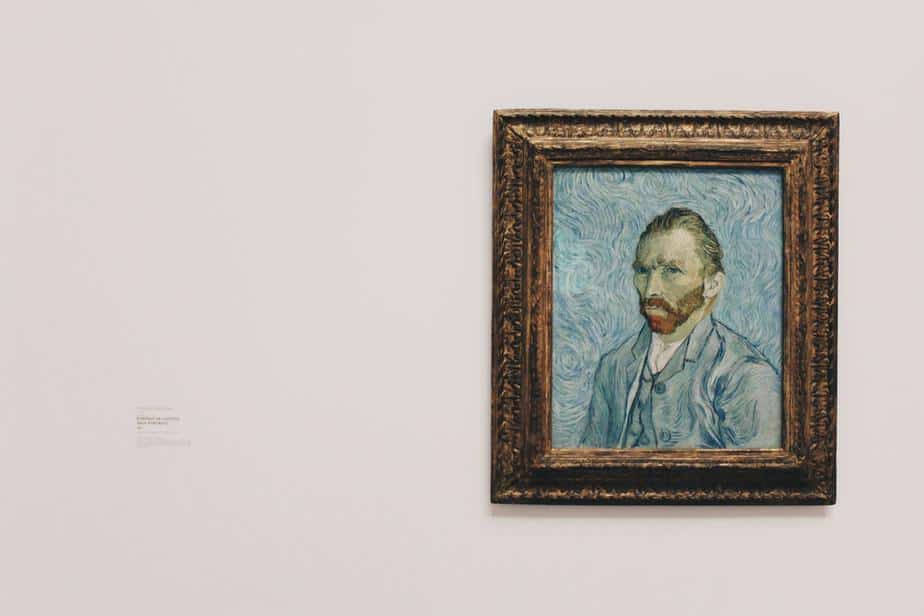 A paining on par with the recognizably of the Mona Lisa is Van Gogh’s self portrait. Though the artists was known for painting many of these throughout his career (over 30 known to exist), the one housed at the Musée d’Orsay is considered the most famous as it is the last one he managed to complete before his death.

What’s interesting to see is the somewhat resemblance of the paining background to his earlier work of Starry Night. Art lovers also enjoy debating the melancholic look on his face and why exactly he might have chosen to depict himself as such.

When you find yourself in the area of the Latin Quarter, walk yourself over the The Musée National du Moyen Age — also known as the Cluny Museum.

In this beautifully preserved gothic building you’ll find one of my favorite paintings in all of Paris, de Campes’ La Tenture de Saint Etienne. Perhaps the term paining is a stretch; the piece is actually a 45 meter long mural that wraps its way around three rooms within the museum.

The painting is a representation of the life Saint Stephen. It is shown through 23 individual scenes depicting the essence of medieval French history. Each scene is accompanied by an synopsis so that the depiction of the event is made clear.

You’ll ride though almost every emotion possible as you work your way through the three rooms. The scenes are enchanting while heavily poignant all at the same time. Take your time with this masterpiece by de Campes!

Since we’re on the subject of favorites, lets jump back to the Louvre for a bit and look at an absolute wonder by another French local, Jean-Auguste-Dominique Ingres.

The color pallet of the work is incredible as is the detail of the skin of each woman in the piece. They appear to exist harmoniously; enjoying their time in the baths. 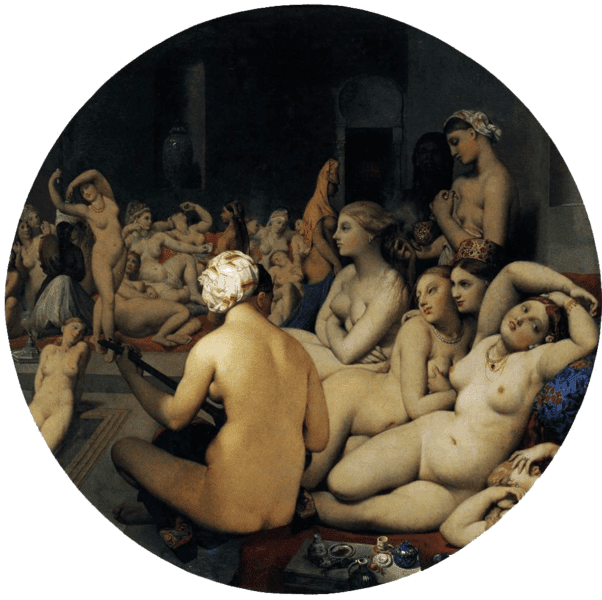 You get a sense of safety and mutual understating when you gaze at this piece — you can almost delve into the minds of the women who appear lost in thought as those around them continue to celebrate.

For when you’re in need of art that will transport you instead of forcing you to think… there’s Monet. Les Nymphéas, or The Lilies, is another large panel piece that stretches across eight walls within the Orangerie Museum.

This museum is located in the Tuileries gardens in Paris, a gorgeous green park area that shouldn’t be missed during your visit. I enjoy visiting the Orangerie Museum and lazing on the grass with a book right afterwards to reflect.

This piece took our friend Monet 12 years to complete. All it really calls for is deep admiration, not too much thought or historic consideration. 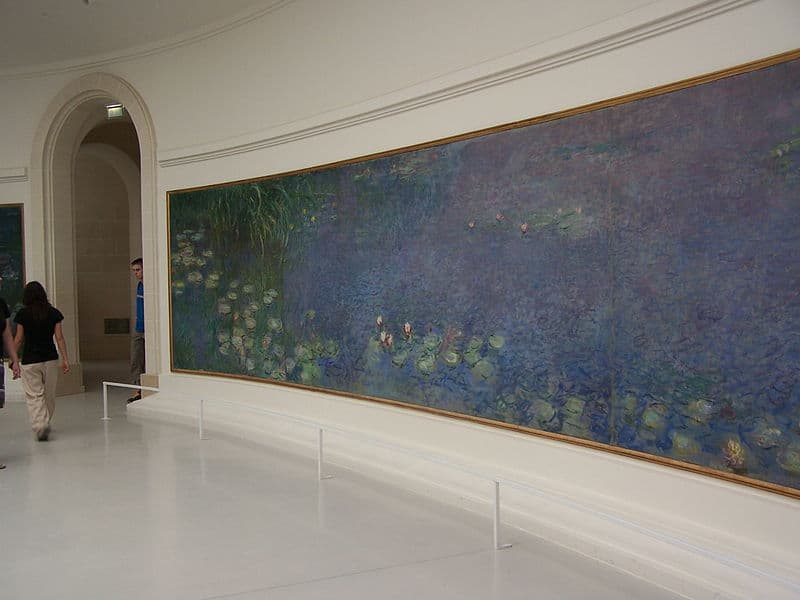 The Lilies in Paris – by gigi4791 – Wikimedia Commons

The piece is abstract and enchanting. Monet wished to depict the visuals of the water and it’s lilies at different points of the day. His impressionistic style is perfect for the scenes and the size of each panel really adds to the overall impact when viewing in person.

Monet was a notorious lover of ponds and the secrets that they held. He is known to have painted them over 200 times, these eight works of The Lilies included.

Back to The Centre Pompidou we go for another famous work by artist Marcel Duchamp.

Fontaine was created in 1917 and it is said that the artist never took the piece, nor himself very seriously. A century later and we are still traveling far and wide to visit his visual jokes in person.

Through his alternative, ironic and absurd creation Duchamp quickly earned the title of being one of the coolest artists of the recent century. 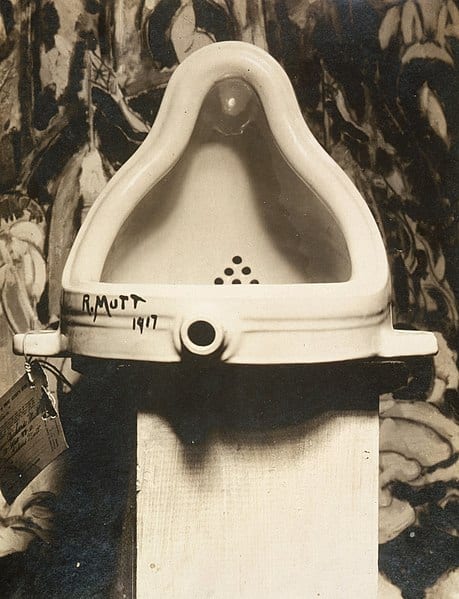 Fontain is a urinal. In 1917 the artist submitted this piece of plumbing as an exhibition in New York City. By the time the 50s and 60s rolled round, Duchamp had been commissioned to reproduce sixteen replicase of the exhibit, some for public and some for private display.

This is one of the more recent pieces added to the Louvre’s permanent collection. Les Trois Grâces by Cranach was purchased in 2011 for a petty fee of just… €4 million.

The same family had owned the piece since the 1800s and it wasn’t until 2011 that they finally agreed to let go of it. 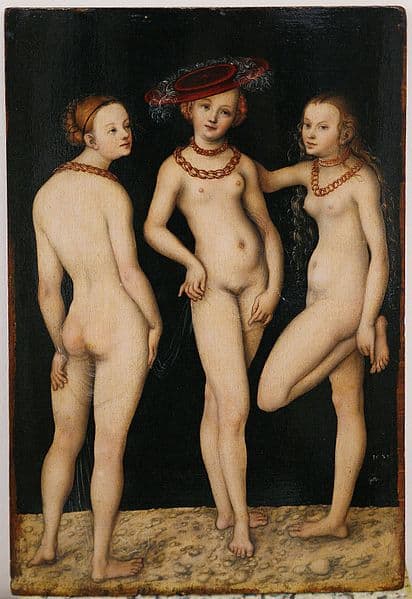 The painting is a depiction of three nude women and was created to represent the three graces: charity, friendship and fidelity. The bodies and stances of the women have been termed somewhat “androgynous”, which is interesting to contemplate as you view the piece in person.

Usually in artworks from this era, women were painted in far curvier lights. The question is whether or not this piece was a commentary on realism or fantasy. Go see for yourself.

When in Paris… follow around Monet. Another enticing piece by the local artist is Impression, Sunrise painted in France in 1872.

The piece depicts the port of Monet’s hometown in France, Le Havre. The sun is rising over the water as the ships and boats float in.

This painting is widely considered to be the piece that pioneered the way for the Impressionist movement. It threw away the era of traditional painting and made way for a more risk taking approach to creating imagery.

The Musée Marmottan-Monet, located in the 16th arrondissement, is home to a collection of over 300 original Monet works and is an absolute feast for the senses. It is the largest collection of his works in the world. 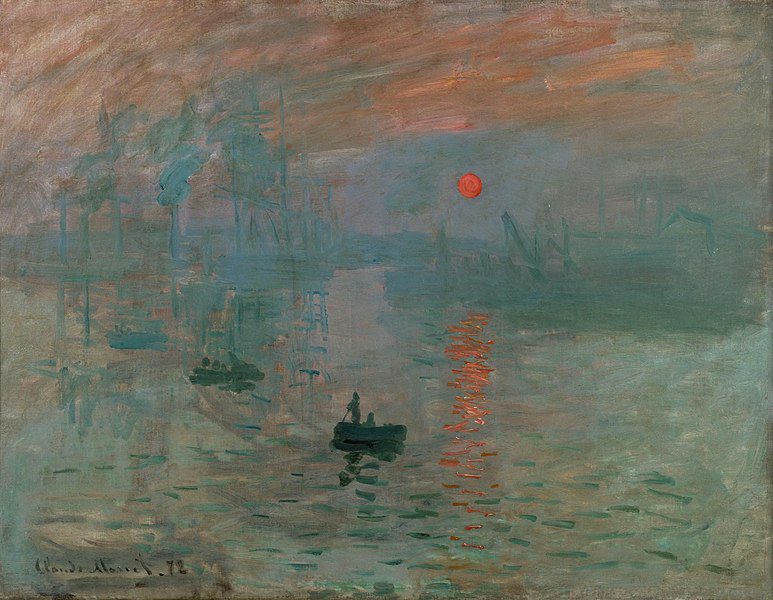 You might want to dedicate most of a day to exploring this space as it takes some time to work through and you don’t want to leave any of his other pieces out — trust me. Leave with an overwhelming sense of whimsey and a refreshing view on some of the seemingly mundane scenes you pass everyday.

This list of unmissable artworks in Paris could have been 100 points long — there are simply so many unfathomable pieces of art in Paris that would be endlessly fun to track down.

The great thing about the pieces mentioned above is that they are housed in museums that feature a great deal more alongside the works, meaning your search for each one will be filled with other incredible art works start to finish.

The hunt is on.