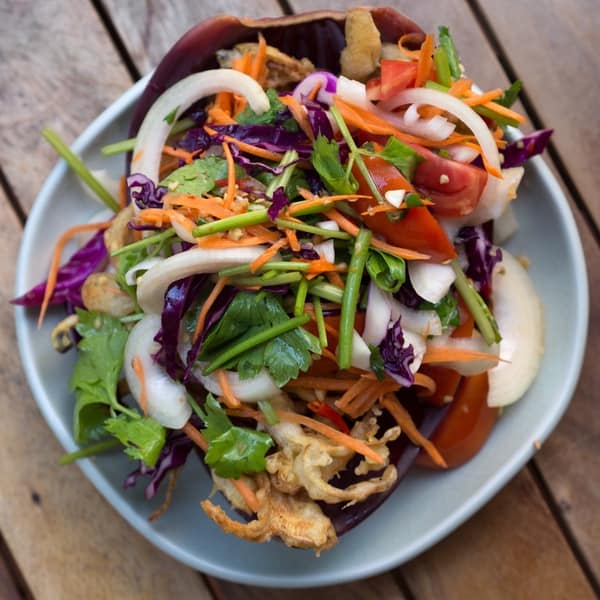 Thai salads are most commonly known as ‘yum’, although in actual Thai language terms, ‘Yum’ is closer to ‘mix’. So you get lots of different ingredients all mixed together, as with any other salad.

Also as with any other salad, varying proportions of the ingredients are likely to be raw vegetables of some form or other. But that’s not to say that a fair amount of cooked stuff doesn’t go in there as well.

Most people who like their food and/or have travelled to Thailand before will probably be aware of the famous ‘Som Tum’ Thai salad (in this case being a ‘tum’ rather than a ‘yum’, with the Thai word ‘tum’ loosely referring to the pounding or crushing of various, key ingredients before being added to the salad). 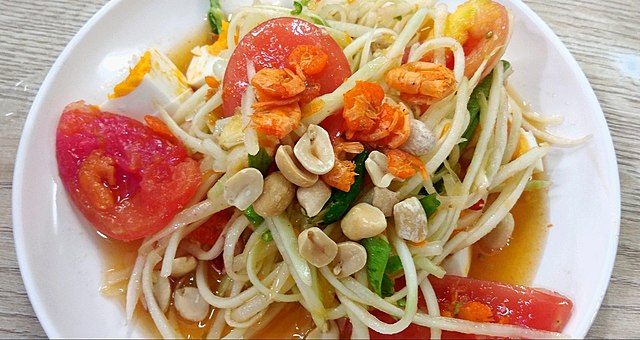 And although it is undoubtedly the most well-known and most-consumed Thai take on anything constituting a salad, Som Tum is just the tip of the iceberg when it comes to the endless possibilities of ‘Thai saladery’.

Some of the common base components can be some form of meat, fish, or seafood, combined in various ways according to the region of their origin. They are mixed with many other typically Thai ingredients which may include various herbs and spices, vegetables, fruits, and peanuts, to name but a few.

Many of them are likely to include fresh, dried, or crushed chili, fish sauce, sliced fresh shallots or onions, lime juice, sugar, tamarind, and herbs like lemon grass, kaffir lime leaves, spearmint, coriander leaves, spring onions and cilantro. You might get some ginger, galangal, or ‘khamin khao’ (white turmeric).in there as well, along with a variety of ripe and unripe fruits and vegetables such as green papaya, cucumber, tomatoes, and lettuce. 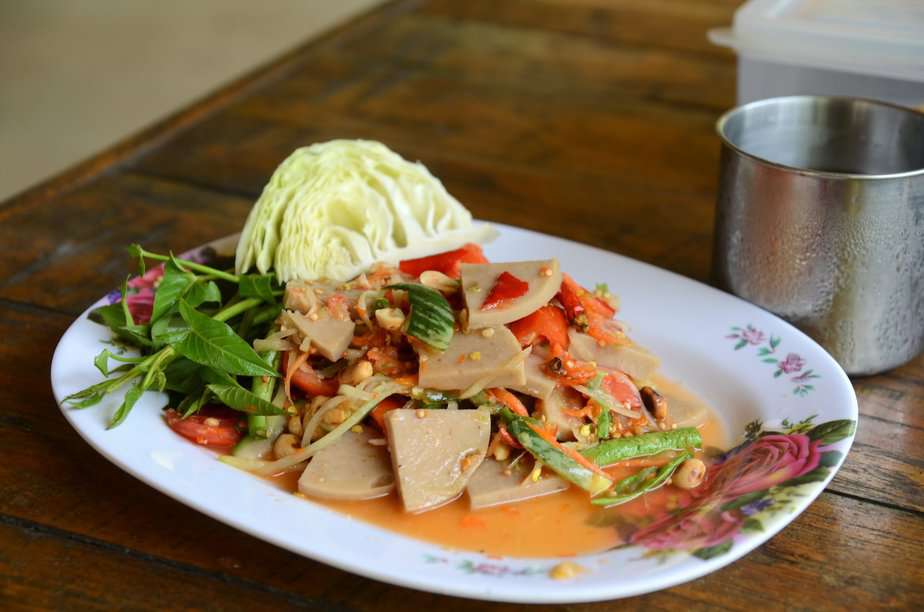 So let’s check out a few Thai yum salads in a bit more detail.

Som Tum is a salad largely comprised of unripe, green papaya. It is associated with the Northeast of Thailand (known as Isaan), although it is considered to have first come from Laos.

Apart from the thinly-sliced strips of green papaya, some of the other common ingredients to be found in Som Tum to varying degrees usually include long green beans, roasted peanuts, small tomatoes, garlic, chillies, and a sauce typically made with crushed, dried chili peppers, fish sauce, dried shrimps, palm sugar, lime and/or tamarinds. 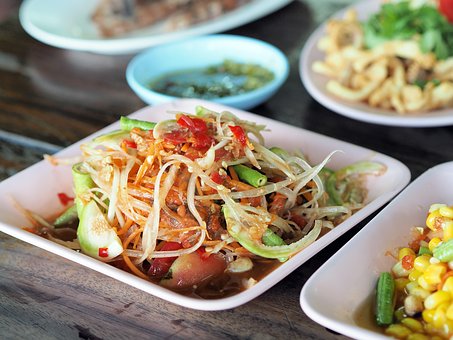 The varieties are almost endless, and can include other added ingredients according to variations in preference and region. It is common for people buying from the street vendors who make it according to preference to tell them what to put in and leave out, including how many chillies to add for the preferred level of spiciness.

Hence the ‘sauce’ can appear in many combinations, significantly different in sweetness and spiciness.

There is one thing to know about Som Tum and a few other dishes that originate from the Northeast of Thailand. They do tend to utilise something known as ‘pla ra’ in much of their cooking, and it is not to everyone’s taste.

This is both a strong-smelling and strong-tasting brown sauce, and is made from fermented, pickled fish. Some strains (especially the home-made ones) are even made with fish that was uncooked beforehand, which has been known to raise a few health and hygiene concerns over the years.

So if you ever find yourself in the Northeast of Thailand or in a north-eastern restaurant, be sure to enquire on the pla-ra beforehand – but in all honesty there is a strong possibility that you will be able to smell it if it has even been near the dish!

Som Tum can actually be found on the menus of many traditional Thai restaurants around the world these days. It can be enjoyed as a main dish, but is best as a side order to complement various types of grilled fish or meat. 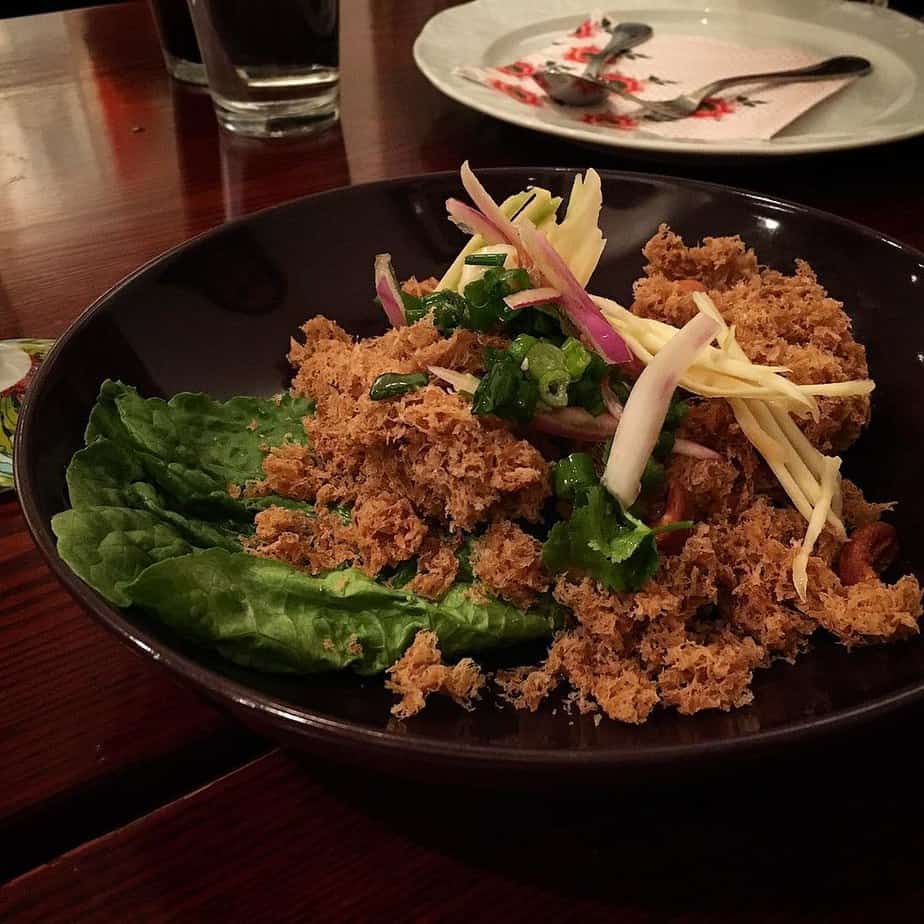 This Thai salad includes deep-fried, fluffed-up pieces of catfish (known as ‘Pla Dook’ in Thai) that is mixed with green mango, shallots, possibly lettuce, and a dressing that is sweet and spicy.

Again this is a nice side dish to any main – again usually grilled fish or meat, and possibly stick rice – but this one might be either too sweet, spicy, or both to be an ideal main for some people.

‘Het’ is mushroom in Thai, so what you have here is a Thai salad mixed with mushrooms. That could be just one significant type of mushroom, or maybe a mixture of different types.

‘Het Hoo’ is a common one (‘ear’ mushroom – it looks a little like an ear) but it largely depends on what is available. There is a huge variety of mushrooms that grow wild out in the plains of Isaan that have been utilised in this and many other dishes.

This is a Thai salad that tastes like many other Thai salads, in that it is largely spicy and sour – maybe sweet as well, depending who makes it.

It will also typically have onions, tomatoes, shallots, coriander, and various other ingredients according to taste – but is usually very spicy! 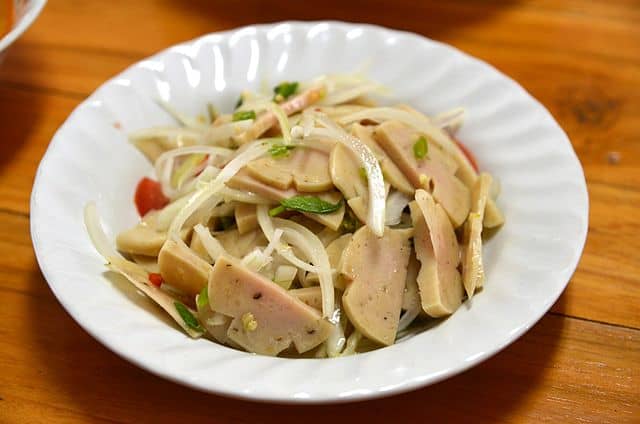 Image by Takeaway from creativecommons.org

The ‘Moo Yor’ version features a white, processed Vietnamese sausage as the main ingredient rather than the mushrooms, but is otherwise the same taste-wise.

‘Ma-Ma’ is Thailand’s most famous and most widely-utilised brand of instant noodles. They’re obviously super- quick to cook (just add boiling water), and are added to salads hot, warm, or even cold. Some salad makers even add them dry, to add a crispy and crunchy texture to the dish. 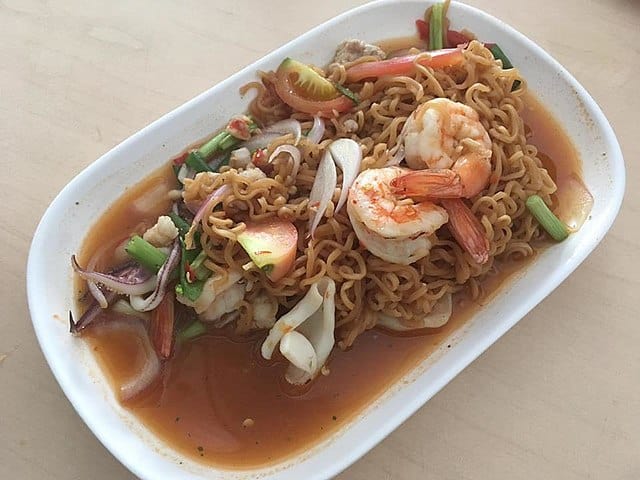 The salad itself, aside from the addition of the instant noodles, is not likely to be that much different in terms of flavour and ingredients to the previously described ‘Yum Het’., and may feature other ingredients such as shrimp, minced pork, or squid.

(This is also the case with a lot of other Thai salads that may just add different ingredients to mushrooms or noodles such as fermented or processed sausage, but the ingredients and flavour are largely geared towards the spicy, sour, and sweet elements.)

‘Khao Yum’ (Rice mixed salad) originates from the South of Thailand, and is a mix of herbs, vegetables, and rice. Sometimes there are other main ingredients such as seafood or ground meat, but generally this dish doesn’t contain them.

Legend has it that the dish first came into being when the ruler of a southern Thai region asked a health practitioner to come up with something healthy to eat. The idea was that it would combine all of the healthy ingredients available in the region at the time onto one dish.

This rice salad was the reported result, including Indian mulberry, from a tree that grew close to the houses of well-respected people in the community at that time and was considered to have health-giving properties. 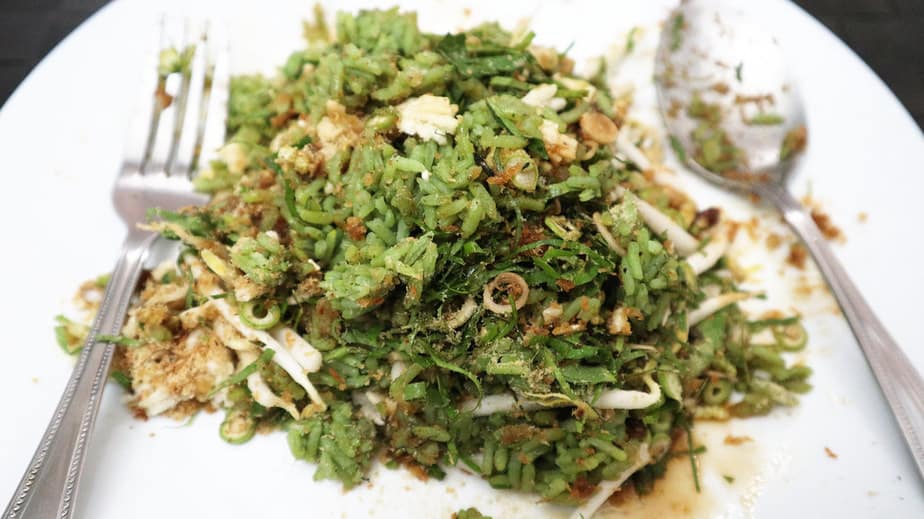 There is also talk that Khao Yum originates from the Malay culinary tradition. Much of the cuisine in the southernmost regions of Thailand is in fact influenced in the same way to some degree. This is because some of the provinces in the South once formed part of the Sultanate of Pattani, which included what is now Kelantan in the Northeast of Malaysia.

It can be a challenge to put this rice salad together – depending on where you are –as it contains an array of ingredients found solely in the region. However, many Thai cooks say that khao yam is not that different from many other dishes from Thailand in that it can be made with any ingredients that are available. As long as they are fresh and fit the dish’s profile, that is, which in this case is somewhat tart, salty, and herbal.

The rice is not usually just plain white rice, but in fact coloured with butterfly pea blossom and gardenia fruit to make the grains purple and yellow. Or some people may just use the ‘rice-berry’ type of ‘brown’ rice which is actually a purple-brown colour and is considered to be a healthier option. At the same time, the addition of southern ingredients like ‘bai yor ‘(Indian mulberry) and Moringa Flower are also believed to add immunity-boosting antioxidants to the mix.

Sometimes, the main component of the salad dressing is ‘nam budu’. This is the liquid from pickled fish mixed with salt, and in some ways is similar in composition to the pla ra of the Northeast. In fact it is sometimes mistaken for the Isaan preference – but it’s not exactly as punent as real pla ra (if you’ve ever smelled it being cooked you’ll know – the smell is unforgettable).

Nam budu is used as a base in many Southern Thai dishes, which adds to the in the earthy, deep flavours of a variety of dishes for which the area has become well-known.