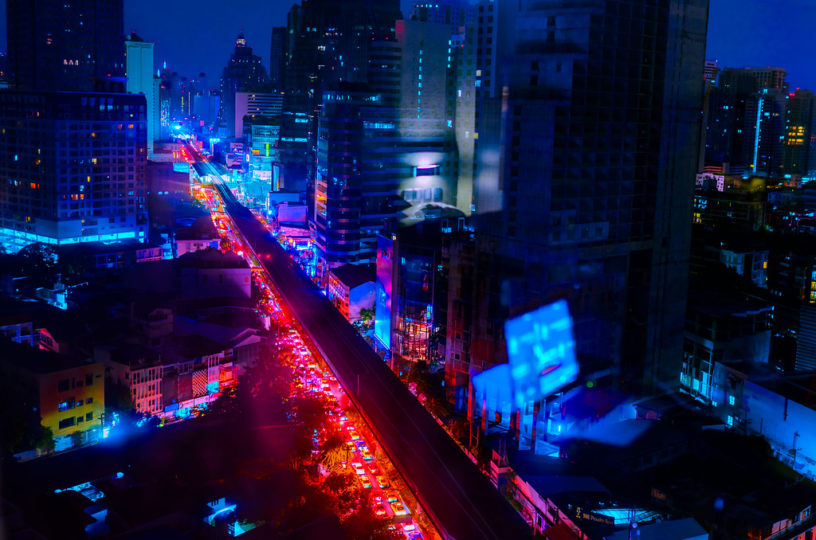 Image by cloud.shepherd from creativecommons.org 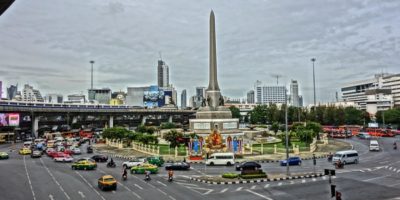 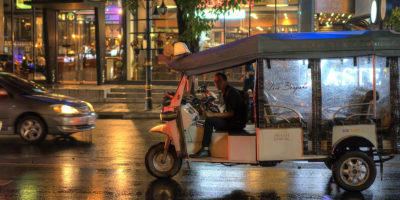 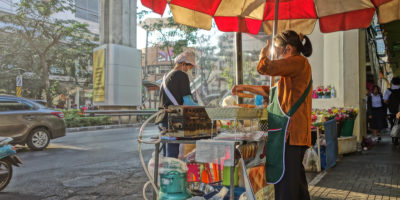 Sukhumvit is a region of the Thai capital that encompasses the area surrounding the main, central BTS skytrain line. This line runs straight along the road and includes stops at all the main districts, including many of the city’s hotspots. 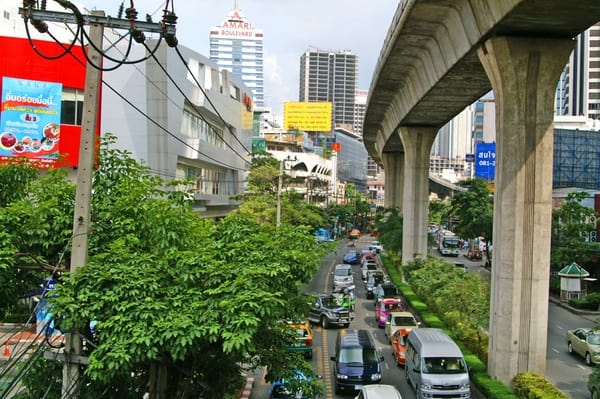 There are three main areas of Sukhumvit Road in Bangkok, which are largely:

Aside from the fact that it contains what might be considered some of the most popular areas of the city in terms of shopping, cuisine, and entertainment, Sukhumvit is also one of the regions of the city much of the expat community frequents, along with the majority of international tourists.

There is tons of diversity along this road and its surrounding environment when it comes to restaurants, accommodation, bars and pubs, and shopping malls.

There are also parks, businesses and offices, educational facilities, supermarkets, and enough in terms of entertainment to ensure that the late night partying goes on and on. 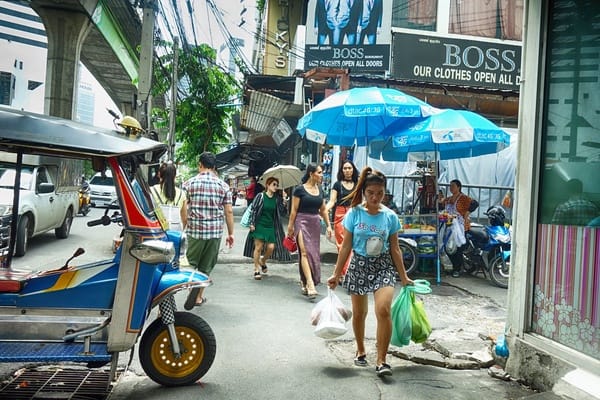 One example is Flow House Bangkok, where you can try your hand at a bit of surfing in the city. Places like this constantly pop up around these areas as young and innovative Thai business owners try to outdo each other in the versatility stakes.

Needless to say, whether you are a visiting tourist, an expat, or a local, you’ll find everything you need on the Sukhumvit Road, one of the most developed and diverse areas in the city of Bangkok.

If you are heading towards the Sukhumvit area from outer Bangkok, you might consider that the central region of the main stretch is largely considered to be Asok (home to the popular Terminal 21 Mall, and 5 minutes down by BTS from the Phrom Pong district).

The central BTS line runs into Asok, as does the MRT subway (Sukhumvit stop), which provides a kind of transport interchange hub at the main Asok junction. You can see from the Skytrain station at Asok that the area is more than a little heavy on traffic, and is best avoided if at all possible when driving.

At certain times (6 pm on Fridays springs to mind) the area is in nothing short of absolute gridlock, with both of the train stations resembling something similar, only with people rather than cars.

Buses don’t fare much better in Bangkok as there are no bus lanes to speak of. 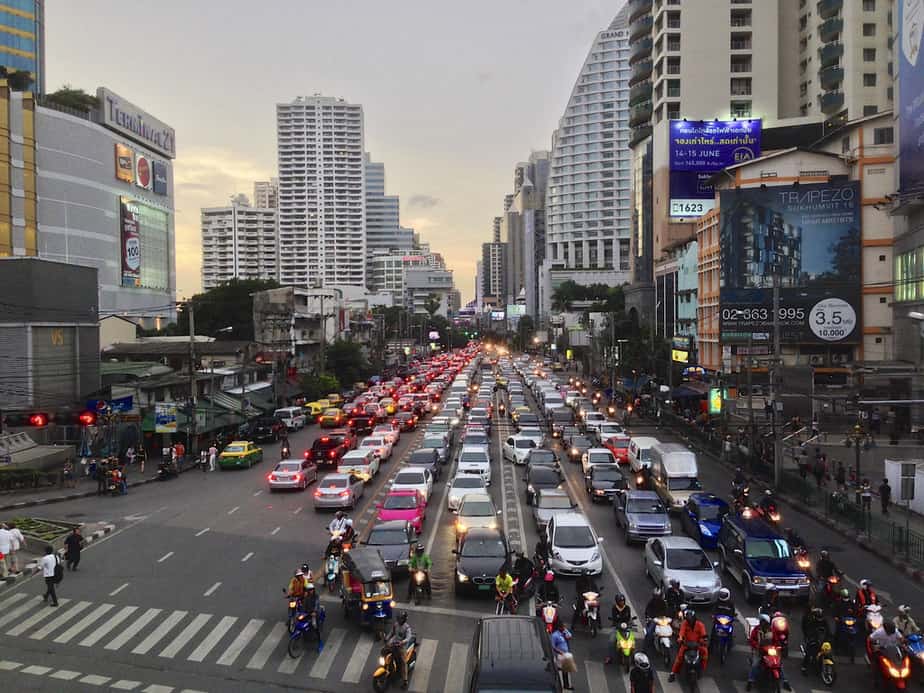 Image by lay Gilligand from creativecommons.org

And even though accommodation in the Sukhumvit area is easy enough to reach by BTS or MRT, you’ll still find huge crowds of people using both of these lines in and around the inner regions, with the Sukhumvit stations being among some of the most congested in the city.

So if you want to avoid spending all of your time on queueing for public transportation, it might be an idea to stay in an area of Sukhumvit. It’s best to find the part most suited to what you’re looking for though if you plan on spending most of your time in and around this area of the city.

As we already said, there is a fair bit of diversity along the Sukhumvit Road in Bangkok. This means that there are quite a few differences between the various districts up and down the main stretch. And sometimes these variations can be significant, as we shall explain.

A fairly expensive area to stay in (but not the most), Asok is the centre-point of the Sukhumvit line and thus has quite a variation of accommodation. The prices tend to be somewhere between mid to high range, although there are a few budget options.

Here you’ll find everything from deluxe 5-star hotels to Boutique options, various types of guest houses, and a few hostels. 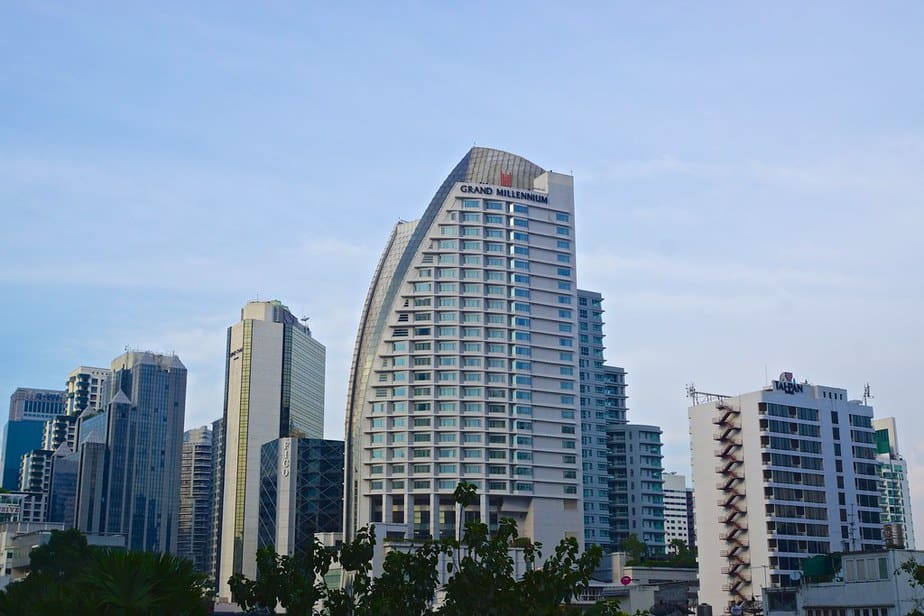 There is an extensive range of local cuisine from the cheap & cheerful to the downright over-priced, along with all manner of international restaurants, which is one of the reasons why many Bangkok locals will often head this way. You can also easily get to other parts of the city from here.

It’s a good spot to be if you are into shopping – there’s the aforementioned Terminal 21, and if you head in either direction from Asok you’ll find some fairly modern and impressive hi-so malls in Central Embassy (Chitlom) and Emporium and Emquartier (Phrom Pong)

Heading down from Asok in the direction of the trendy Chitlom region and Wireless Road, first you will encounter the Nana district.

There are a few distinctive things about this area of the Sukhumvit Road. One is that a section of it is the heart of the local Arabic community, which has its own ‘quarter’ around the Soi 5/1 area (known locally as ‘Soi Arab’). 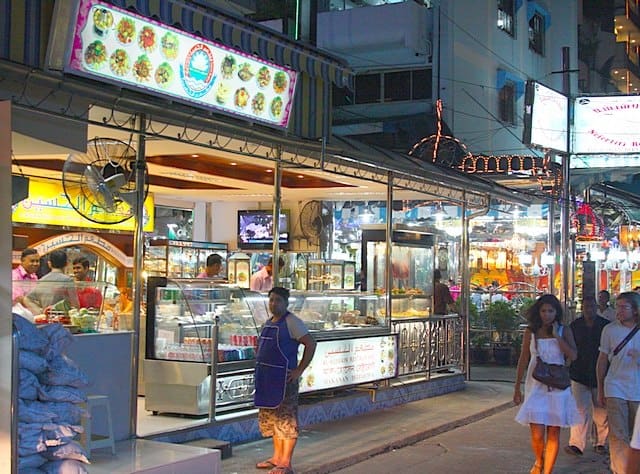 The network of small backstreets around this spot  offers some great Middle-Eastern cuisine of all shapes and forms. In terms of accommodation this area largely caters to the Arabic and African visitors looking for a ‘home away from home’.

The Nana area is in many ways somewhat run down compared to the other districts on Sukhumvit Road, and it also happens to be one of the main 2 ‘red light districts’ catering to tourists. There are plenty of seedy bars and an entertainment plaza for those interested in such delights around the Soi 4 area. 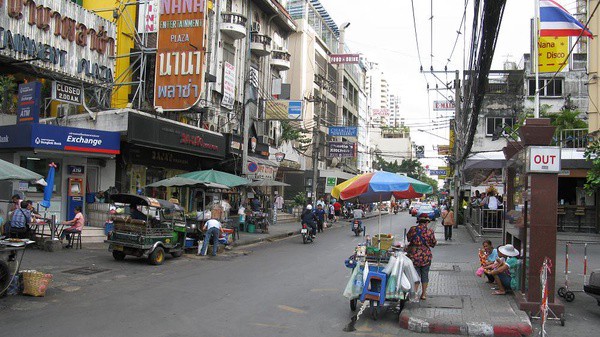 Heading back up more towards the direction of Asok there are many more entertainment options by way of clubs, bars and restaurants, with Soi 11 being a favourite of young-ish revellers both locals and tourists. Plenty of choice of different international cuisine around here, along with a few decent English pubs sports bars, and coffee shops.

This district of the Sukhumvit Road is where the neighbourhoods start to go a bit more upmarket, with some of the best malls to be found anywhere in the world, and a plethora good restaurants. 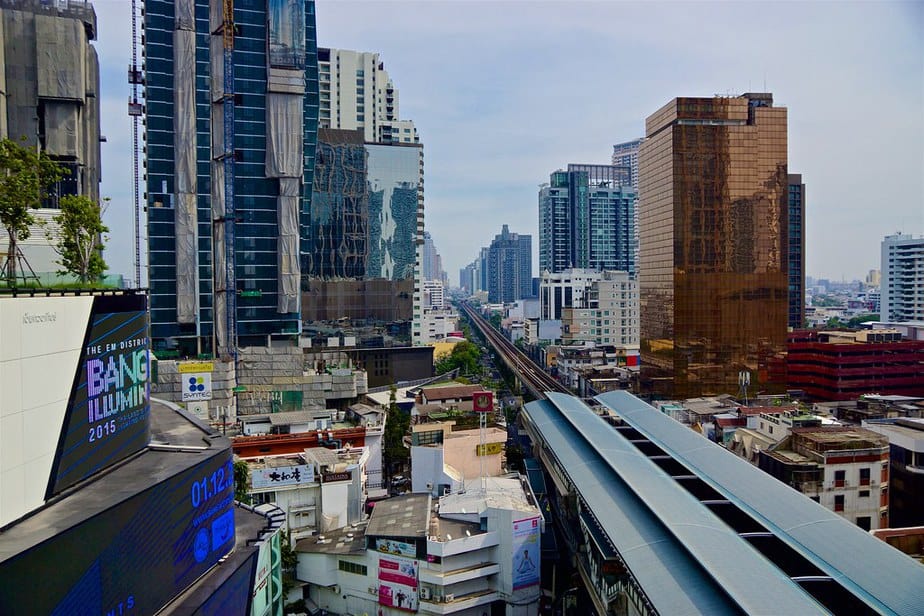 Plenty of high-end hotels around this region, with a few mid-to-high range guest houses and boutique hotels around the smaller backstreets. Needless to say, it’s not the cheapest area to stay in, but not impossibly over-priced if you do a little shopping around and comparing beforehand.

Right next to the BTS station of the same name you will find the Emporium and Emquartier malls which stand adjacent to each other on opposite sides of the road. The Emporium was the first of Bangkok’s high-end shopping centres, with the Emquartier being a recent addition that is even more impressive. 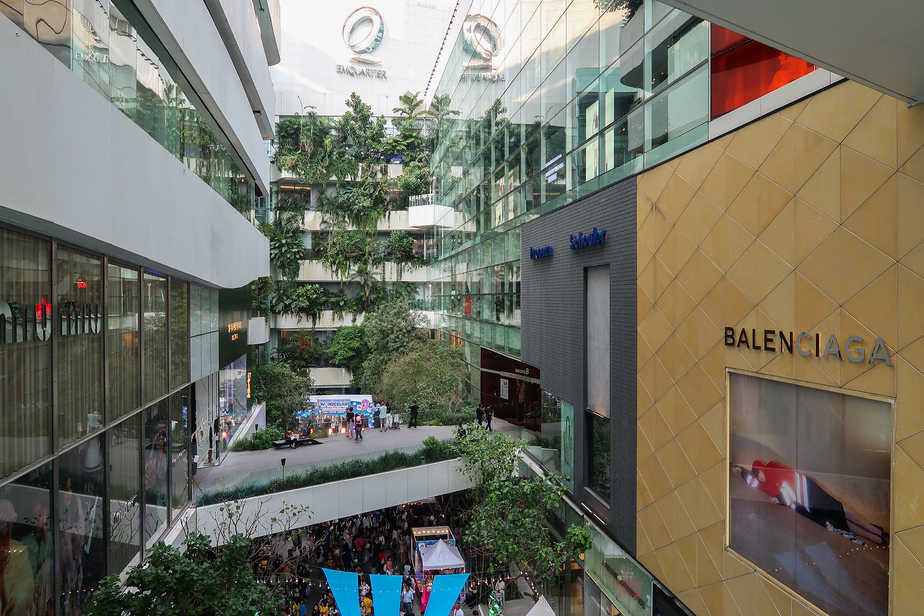 There is a green park right next to the emporium if you fancy taking time out from the humid concrete of the streets, and relax next to a large lake under a few trees. It’s not quite as big as the more famous green areas in the capital such as Lumphini Park, or Chatuchak Park, but Benjasiri Park offers a welcome respite from the chaos of the streets and malls.

Aside from the artificial but pleasant lake, you’ll find dedicated sports areas for basketball, running, volleyball. There is also a kids’ playground in this park, as well as a local swimming pool and a skateboarding area at the far end. 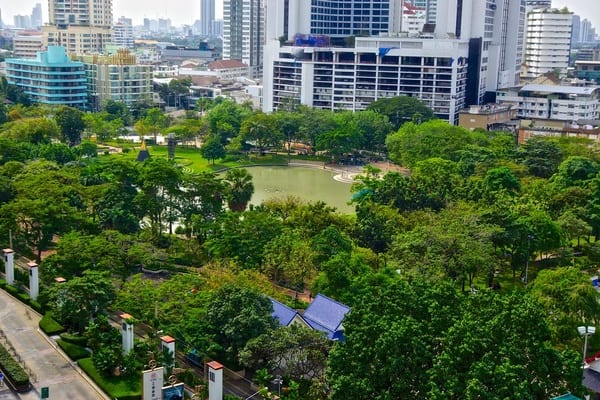 There is also a prominent Japanese expat community in and around the Phrom Pong neighbourhood heading up towards the next BTS stop Thong Lor, and the affluence of the district is quite apparent, even from the streets’ cleanliness and the paving of the paths – a stark contrast to Nana for instance, where it’s not that uncommon to see huge rats scurrying around the waste left out next to the road.

This is the next BTS stop up from Phrom Pong, and the affluence and modern development is still apparent. It is a popular area with affluent young Thais for its high concentration of trendy cafes and eateries, as well as its nightlife that comes by way of pubs, bars, and luxury clubs.

Although Thong Lor is quite a ‘hip’ area of the Sukhumvit Road, it is not considered to be quite as central as Asok or Phrom Pong, so some hotels won’t be quite as expensive. You’ll also find a few trendy boutique-type hotels and guest houses around this area, which could be quite reasonably-priced in mid-range terms. 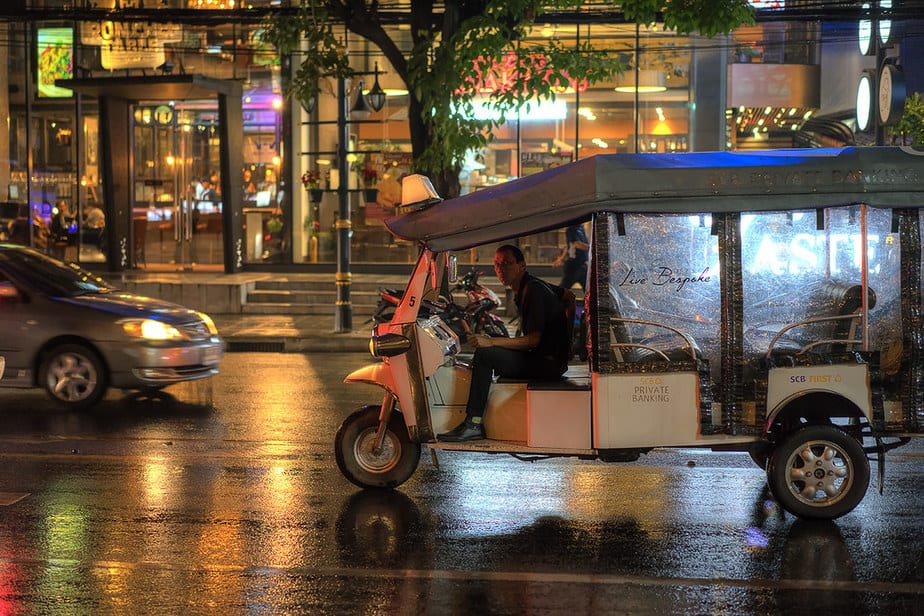 Thong Lor is not as big as Phrom Pong, but it does still offer plenty of choice in terms of eateries and entertainment, with plenty of spas and massage options if you fancy a bit of pampering.

So whatever you fancy doing on a visit to Bangkok — you’ll find something along the Sukhumvit Road to suit!