The secret places next to the main landmarks in Paris 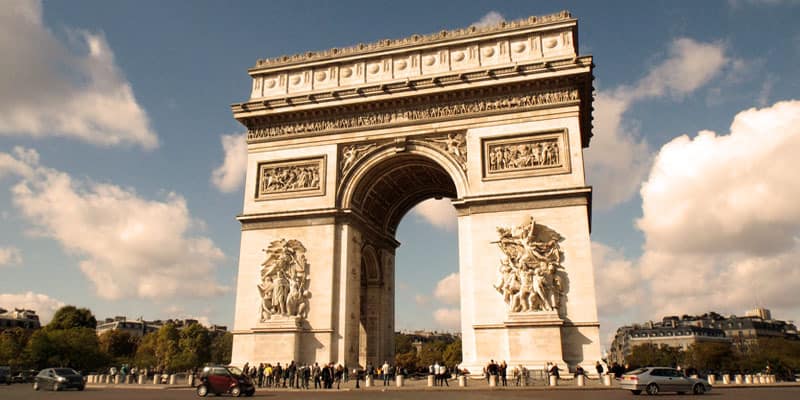 Visiting the landmarks in Paris should be acknowledged as an Olympic sport; the landmarks are usually crowded, walking around is tiring, and you always feel like you are in a rush. Every time I walk by any of the most important buildings in Paris, I am tempted to indicate to some tourists great places, gardens or cafés that are close to where they are, and where they can be able to rest a bit after the visit. That is why I want to talk to you about some places in Paris that are really close to the main landmarks where you can relax as they are always almost empty. Check out the secret places next to the main landmarks in Paris.

After a stroll on Boulevard Saint Germain, even if you were sitting at the terrace of a café, you could get tired because of the noise around you. Often, people think that in a touristic district, you can not find any quiet place. That is not true. Even in Saint Germain which is one of the most dynamic districts on the Left Bank, you can find a place to sit and rest.

Find a plaza, called “Place Furstenberg”. It is a very small and calm area between two streets. It takes 3 minutes if you are walking to get there from the church Saint Germain, and it will be worth it is one of the very romantic places in Paris. If you want to sit on a bench, you can walk for about 5 minutes and go in front of the church Saint Sulpice which has a beautiful fountain and has been recently renovated, making it a very beautiful and peaceful square to relax.

The Place Furstenberg and the square in front of Saint Sulpice

After the walking to the top of Montmartre hill in Paris, It would be normal to stop for a while before visiting the Sacré Coeur. Actually, there are some gardens all around the Sacré Coeur, but there is one, which is always empty and quiet. It’s called the “Parc de la Turlure”. Located just behind the Sacré Coeur, you will enjoy an amazing view on the Sacré Coeur from here. Most of the people miss that because they go directly in front of the church but I can tell you that it really is necessary to rest a bit before going into the Sacré Coeur.

On the Ile de la Cité…

The Île de la Cité is in the very core of Paris, and so is Notre-Dame. For the same reasons as the Sacré  Coeur, it is nice to find a place to rest before the visit. On the Island, there are two very nice gardens where you can sit. The first one is the square Jean XXIII, famous and never crowded. It’s just behind the square of Notre Dame, beside the Saint Louis Bridge. In this garden you can find benches to sit on and admire an a nice view over Notre Dame.

The other garden is on the opposite side of the island. It is known as The Square du Vert Galant and is at the very end of the island, behind the Pont Neuf. You have to take stairs to get to this very beautiful garden on the banks of the Seine. There, you have a beautiful view of the banks and landmarks in Paris including The Louvre. It is never crowded and the advantage is that you can either sit on the grass or on benches.

Next to the Louvre…

The Louvre is at the core of Paris, and it is hard to find a quiet garden. The Tuileries is way too popular and touristy. I know the gardens you should go to in this district. They are actually in courtyards, but it does not mean that they are not beautiful. When you leave the Louvre museum, take the Passage Richelieu and you will be in front of a huge building called “Conseild’Etat”. Inside this building, there are two courtyards called the “Jardin du Palais Royal”, one with modern art and another one with grass, trees and benches. This is a spot where Parisians love to go during the weekend, and if you are with your children, they will enjoy climbing on the “Columns of Buren” the modern art columns in one of the courtyards.

In the Marais, you can find a lot of nice cafés and bars if you want to rest. But the most secret place in the Marais is a small garden, just behind the modern art Museum Pompidou. After visiting Pompidou museum or after a stroll in the Marais, this garden is really a relaxing place. It is called Anne Frank Garden. Actually, to find it, you have to know precisely where it is. Check out the map to see if you can locate it. Very few people know this garden as it is really hidden, so you have to go in a dead end street to find it. There, some neighbors who know the garden have created their own vegetable gardens. It’s really the place to be if you want to be in one of the secret places of Paris that is next to a major landmark.

Relaxing in districts such as Le Marais or Montmartre, is quite easy. Finding other nice places is harder to do by yourself when you go to very major landmarks such as the Eiffel tower or The Champs Elysées. I know some very nice places where you can rest in these districts and it will probably be even more surprising when you discover them.

Next to the Eiffel Tower…

The district around the Eiffel tower does not have much to see as it is mainly residential. If you need a rest, you have two options. You can either go to The Champ de Mars, the big lawns down the Eiffel tower, or the left bank. This is a really nice spot, but it is not so secret. A place less famous but also relaxing is the Ile des Cygnes. It is a narrow island between the Eiffel Tower and the Trocadero.

It is not so famous because there is nothing special on the island, but it is a nice place to cool down after a tour at the top of the Eiffel tower. There, you can have a nice relaxing stroll on a beautiful alley with trees all around. At the end of the island, you can find a replica of the statue of Liberty in New York to remind the people that it was a French gift to America.

Next to the Champs Elysées…

The Champs Elysées is known as the most beautiful avenue in the world but because of this reputation, you cannot find any nice places to rest on the avenue. That is why, Parisians do not frequent the avenue as much. If you want to rest for a while after strolling on the avenue, you can go to Avenue Mac Mahon which stretches from the plaza of the Triumph Arch. If you walk for about 5 minutes on this avenue, you will notice that the atmosphere will be different and you will find some nice cafés with terraces where you can go have a drink.

If you do not necessarily want to stop but you only want to see a quiet place, go a bit further in to the Avenue Mac Mahon and go to Rue Poncelet. Everyday, in this street, there is an open market and there are small shops all along the street. You are going to see that the atmosphere is utterly different, it is a calm place and with all the typical small shops, you can find a pastry or a French specialty to snack.

Cafés on the avenue Mac Mahon and the rue Poncelet