Cabaret in Paris takes many different shapes and forms. At its core, true Parisian cabaret venue is laid back, spontaneous and filled to the brim with excited bystanders.

Tourism to Paris has changed the face of cabaret experiences, making them more of a planned, ticket-based outing. Travelers like to know when and where they are doing things in advance, so the mainstream cabaret shows like the Moulin Rouge have adapted to cater to this need. 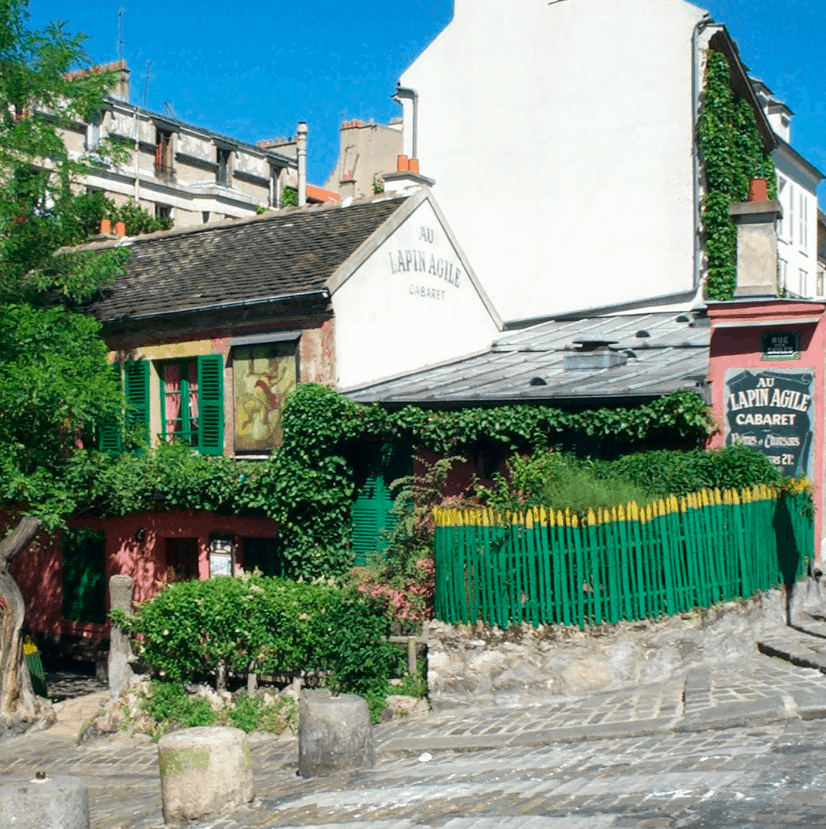 All through the city there remain long lost cabaret venues that are held dear by the locals. The venues range between full scale theaters to small, intimate restaurant settings. Here are a few of the venues you should know about if the history and culture of cabaret remotely interests you.

Le Lido is in some ways a more worthwhile cabaret experience compared to the famous Moulin Rouge. From the outside the theatre is unassuming, those who stroll past it on their free guided walking tours from the Arc de Triomphe never spot the entrance first time.

The Lido sits deep inside the back of some regular Haussmann buildings on the Champs-Élysées. Only one you’re inside will you fully comprehend the vast scale of this performance space. 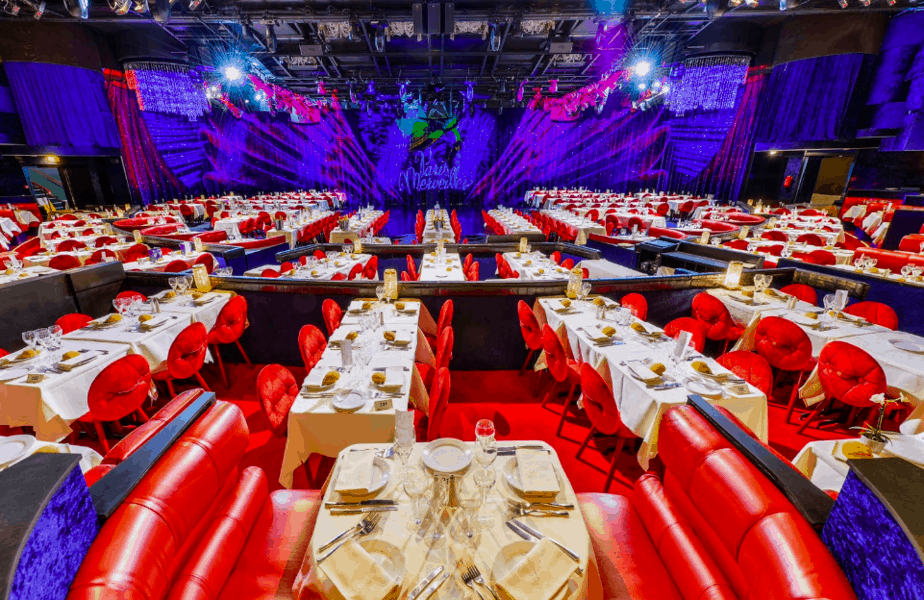 Le Lido – by le Lido – Uploaded by them

It is bigger than the Moulin Rouge and far more opulent. Instead of regular arena theatre seating, the floor is divided into sectioned booths made with dining tables that face one another. You’ll dine with your party in a regular dinner table set up, and you’ll turn to either your left or right when it comes time to face the stage.

The building may be old, but the infrastructure is able to handle impressive standing effects including giant chandeliers that retract up and down from the ceiling with dancers hanging off of them.

The red leather seats and gold ceilings make the perfect mix between kitsch and show business.

The Moulin Rouge is an institution to Paris and needs to be mentioned on every cabaret roundup, whether its regarding the show itself or simply the venue.

The Moulin Rouge has called the same spot home since its inception in 1889. It sits on Pigalle’s main entertainment strip at the foot of Montmartre hill in the 18th arrondissement. You’ll see it coming a mile away thanks to the bright red windmill that crowns the top of the entrance.

The windmill itself is historic to this area. There are only 4 known remaining windmills in Montmartre, the last of over 300 that were once part of Paris. 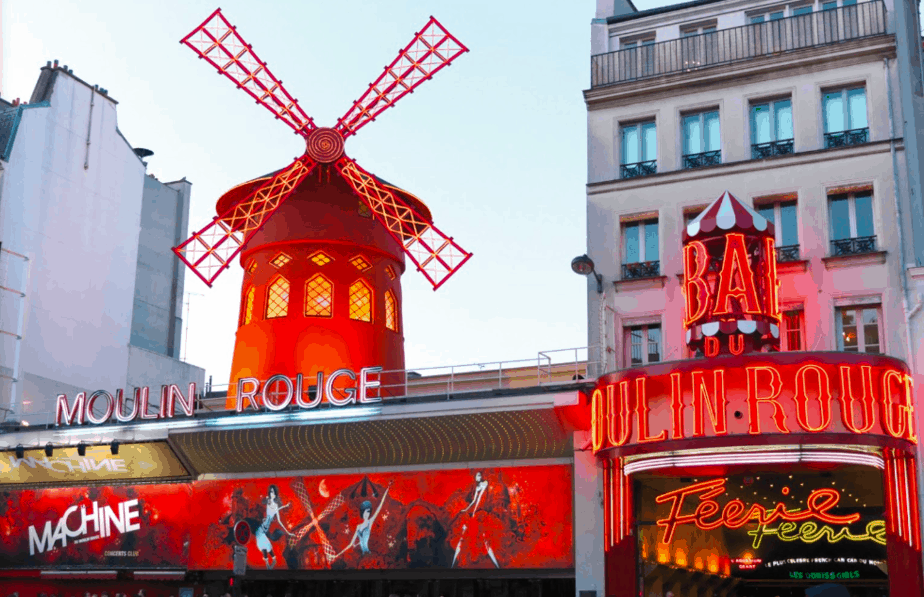 The Moulin Rouge building, however, is not the original. Early in the 1900s the entire cabaret theatre burnt down in a tragic fire. It took six years for the owners to reconstruct the venue from the ground up, making it bigger and better than before.

This is the venue you’ll enter into today if you decide to watch a performance inside the Moulin Rouge.

The revamp was so big that there was even space to add an additional night club to the property. La Machine du Moulin Rouge is a three story entertainment venue with dance floors and bars.

This cabaret venue on the Left Bank across from the Seine is thought to have been architecturally inspired by Gustave Eiffel, the man behind many of the bridges and railways in Paris.

It’s often referred to as a “pleasure garden” rather than a regular theatre venue. The performances take place above and around the audiences who dine banquet style on the floor in the center. 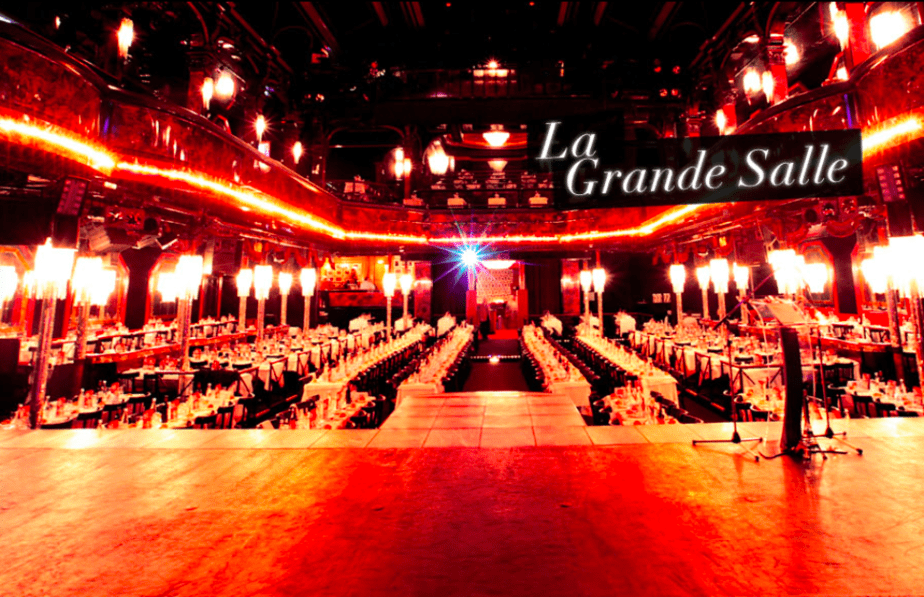 In true Parisian cabaret style the theatre opts for plush red carpeting, booths, wallpaper and  balconies. It’s done in a way that manages to avoid the kitsch element of this theme and embraces a rather classic ambiance.

Because of the high ceilings at the Paradis Latin theatre there are some banquet tables that are blocked by pillars. Be sure to cross check your seats at the time of booking.

Aux Trois Mailletz is the Latin Quarter‘s local hideaway. The cabaret venue is situated deep inside the building at 56 Rue Galande, in the medieval cellars that have withstood the test of gentrification in these parts.

The space is actually a restaurant, but the art of jazz and cabaret have been part of the dining experience here since the 1950s. 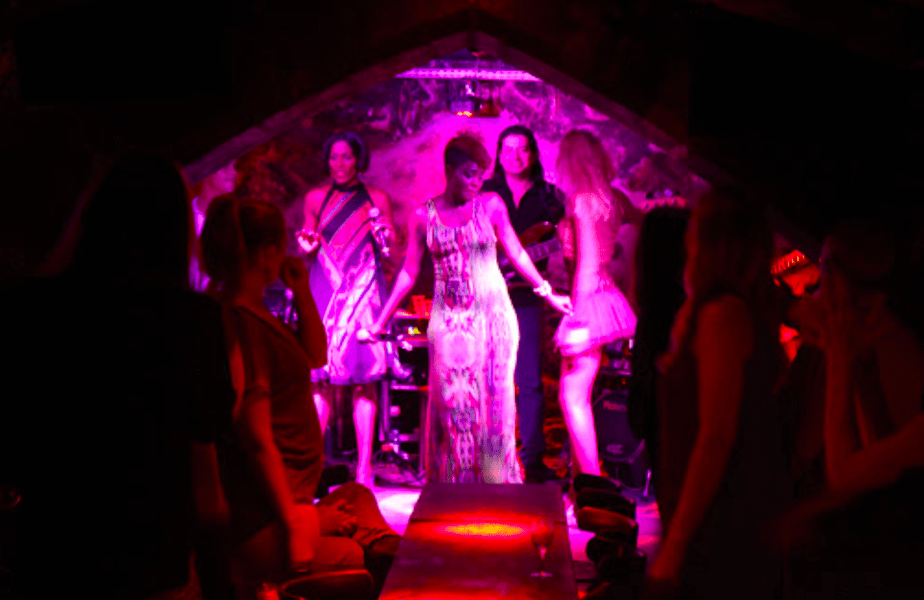 It’s an escape from the city if Paris both figuratively and literally. A time warp of eras as well as a physical removal from the city streets, plunging you deep into the cellars that once functioned as hideaways during the prohibition years.

OPENING HOURS: Monday TO SUNDAY – 6pm to 6am

Walking through Montmartre, secret spots like Au Lapin Agile are as common as the cobble stone streets .

Au Lapin Agile is the oldest cabaret venue in Paris that is still in operation. Compared to the theaters that house the Moulin Rouge and Crazy Horse shows, this one is vastly different. 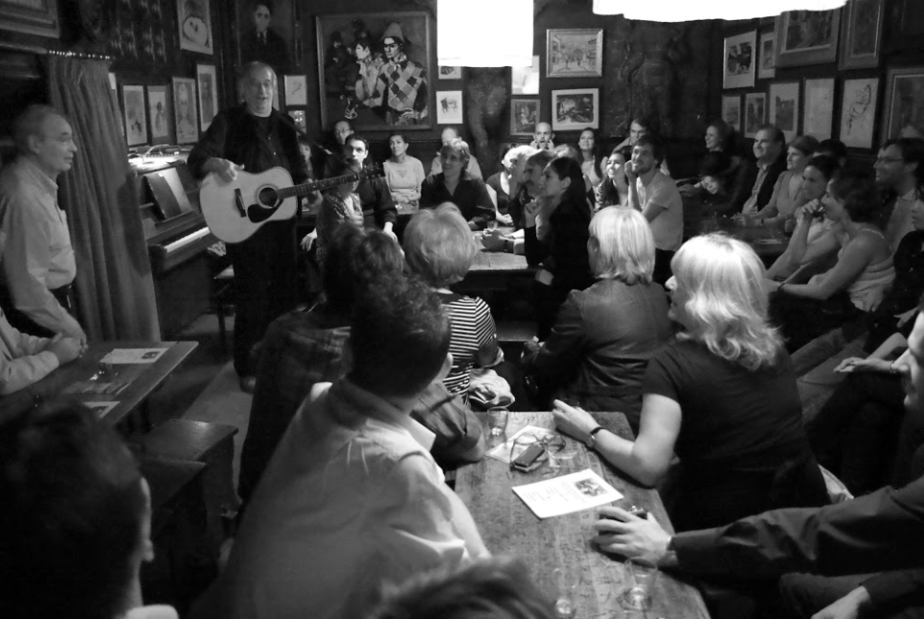 The stonewalled hut can be seen only briefly from the outside, the venue itself takes you deep into this ancient house into a folk-pub themed space. The ceilings are low, everything is made of wood and there’s no red velvet decor in sight.

Instead of a formal stage, the troupe of performers make their way around the floor space amongst the guests each evening. Get here early if you want a suitable place to sit during the show. Entrance is free so long as you are drinking or snacking from the bar.

OPENING HOURS: Tuesday TO SUNDAY – 9pm to 1am