The Most Beautiful Beaches in Normandy 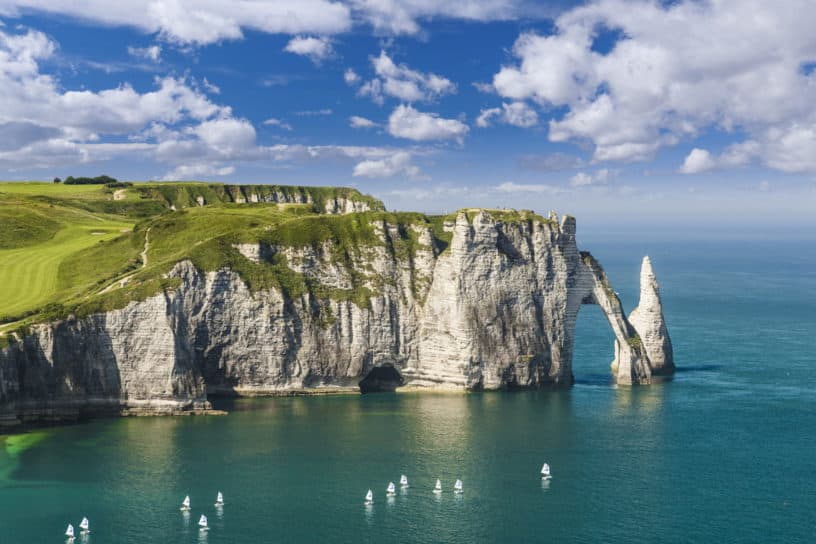 The Most Beautiful Beaches in Normandy

The first time I visited France, I was struck with the diversity and beauty of its landscape. With the metropolitan capital of Paris, the breathtaking beaches in the north and the south, and the rolling mountains in the center, there is really something for everyone. Vive la France!

There is so much to explore in this country, and I’m here to talk about Normandy, a region situated just 2 and a half hours north of Paris. I’ve explored this area a handful of times now, and believe me, there is no shortage of things to do and see! Read on for my list of the 6 most beautiful beaches in Normandy. 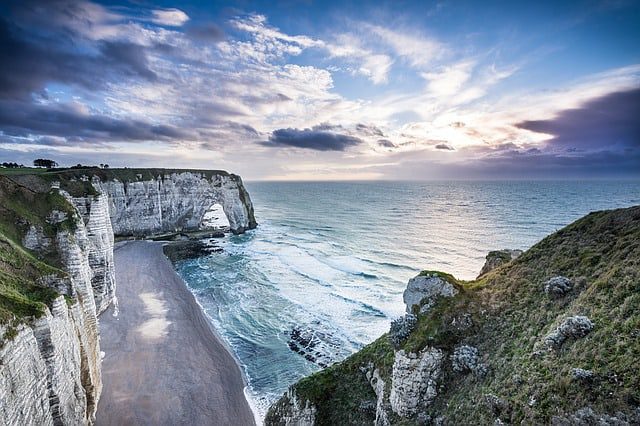 This is by far my favorite beach in Normandy, which is why I’m mentioning it first on my list! With views that seem to be pulled from a dream, add Étretat to your list of must-see places in Normandy.

The massive limestone cliffs that run for about four kilometres around the coast is what Étretat is most famous for, and once you see them for yourselves, you’ll see why. There isn’t much actual beach with comfortable sand for sunbathing, but the coastline serves as an excellent picnic spot.

There are three naturally occurring arches made of limestone, and a pointed rock formation called L’Aiguille (which means The Needle in French) that are worth checking out, and make for some stunning photos. 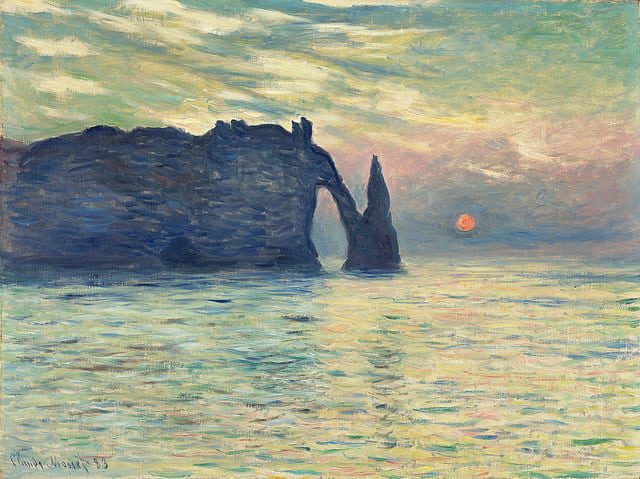 Impressionist artists like Monet and Manet were inspired to paint the cliffs of Étretat, and authors such as Guy de Maupassant and Alexandre Dumas were inspired to write stories set here. Calling all literature and art buffs looking for some motivation, as this Normandy beach is for you! 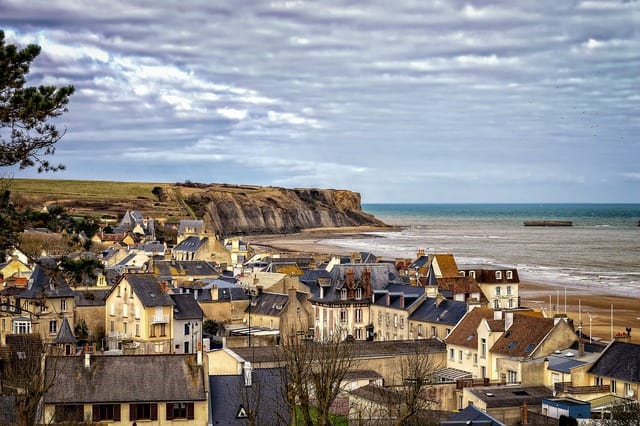 The history surrounding the beach at Arromanches-les-Bains is sobering, as it was the first beach that the Allied troops arrived at for the famous D-Day landings of year 1944, which marked the beginning of the end of World War II.

It is at Arromanches-les-Bains that the temporary Mulberry harbor was installed, making the D-Day landings possible. Here you can find the Landing Museum, which provides information on the landings, and includes pictures of what the beach looked like during WWII. There are still sections of the Mulberry harbor which can be seen today, making this a must-see stop for anyone interested in History.

Other than providing an insight into the D-Day landings, Arromanches-les-Bains is beautiful. There are sandy beaches here, so feel free to bring a towel and some sunscreen to camp out for the afternoon. 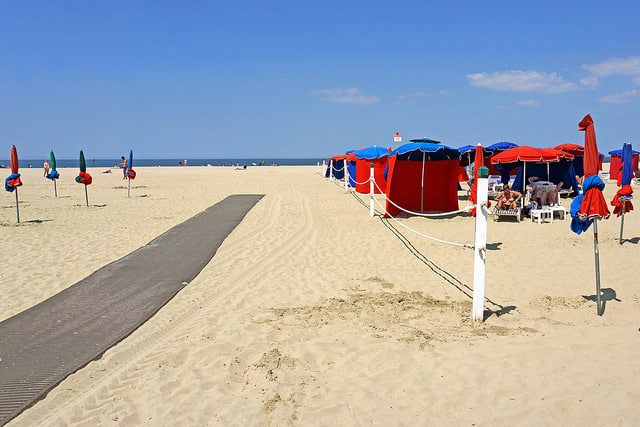 Deauville is a summer hot spot for Parisians. This makes sense, as Deauville is situated the closest to Paris than any other Normandy beach. Hop on a train from the city, and find yourself by the seaside in just a little over an hour!

Deauville is definitely considered to be a resort town, and it is often called the French Riviera of the north. It is filled with high-end shopping, restaurants, and cafés which are perfect for relaxing away for a long weekend.

When you get tired of lounging by the water, pack up your things and check out Les Planches, a boardwalk that makes you feel like you’ve stepped into the past. A fun fact about the construction of the boardwalk? It was created in the 1920s so that ladies could enjoy the beach, but not worry about getting their long dresses dirty.

Deauville is also known worldwide for it’s American Film Festival, which has taken place every year since 1975. Famed Spike Jonze film, Being John Malkovich won the Grand Prix in 1999! 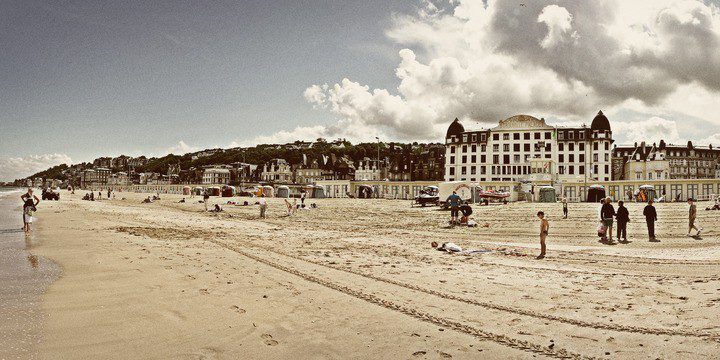 Trouville is located just next door to Deauville, and was made famous in the late 1800s by Napoléon III. The beach is lined with beach cabanas and and a boardwalk lined with beautiful homes. Mr. Monet also loved this seaside town, so this is another location that art lovers will relish in seeing.

There is a swimming pool and tennis courts situated just next door to the beach, perfect for shaking off the sand from your feet and getting some exercise in.

Trouville is known as being less posh than Deauville, and a little bit more laid back, so if you’re truly looking for a break, Trouville is the place for you! 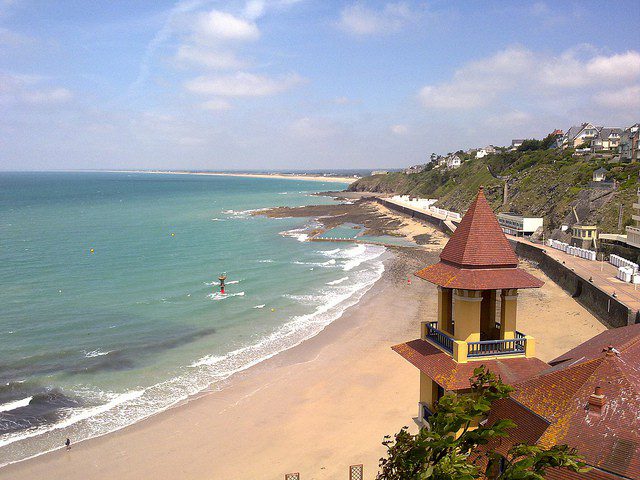 If you love seafood, Granville is the place for you! As someone who grew up in a coastal town, I’m always on the hunt for good, quality fruits de mer, and I found it in Granville!

In addition to the beaches and the seafood, there are a handful of interesting museums in Granville worth checking out. Notably, the Museum of Modern Art, a museum on the history of the town and a museum on fashion designer Christian Dior, who was born there! 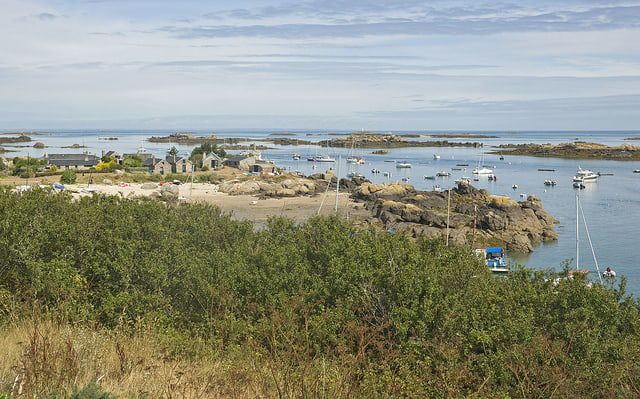 If you still find yourself itching to do more in Granville, hop on a ferry to a group of islands just off the coast called the Îles Chausey. There are hundreds of inlets worth exploring for a day trip! 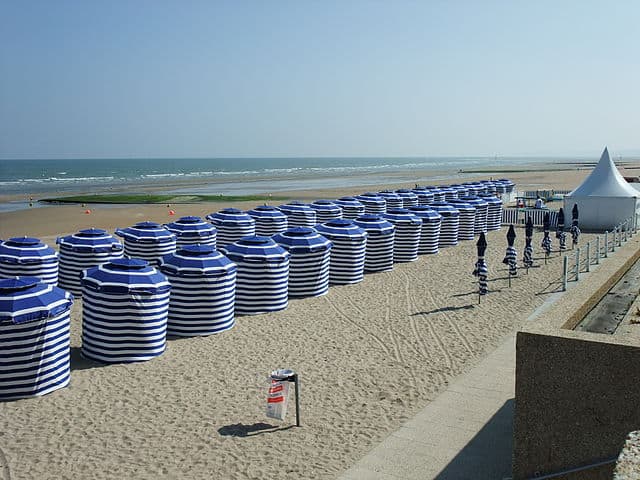 Fans of the French author Marcel Proust should be familiar with the name Cabourg. The author’s masterpiece, In Search of Lost Time, is set in the fictional town of Balbec, which Proust based on the Normandy town.

Not only did he base his fictional town on Cabourg, he also wrote much of the book itself when he was vacationing there every summer from 1907-1914. The town paid its respects to the author by naming a boardwalk after him, the Promenade Marcel Proust, which spans in front of the Grand-Hôtel where Proust stayed. The Grand-Hôtel also inspired the fictional hotel of the same name also featured in his seven volume novel. 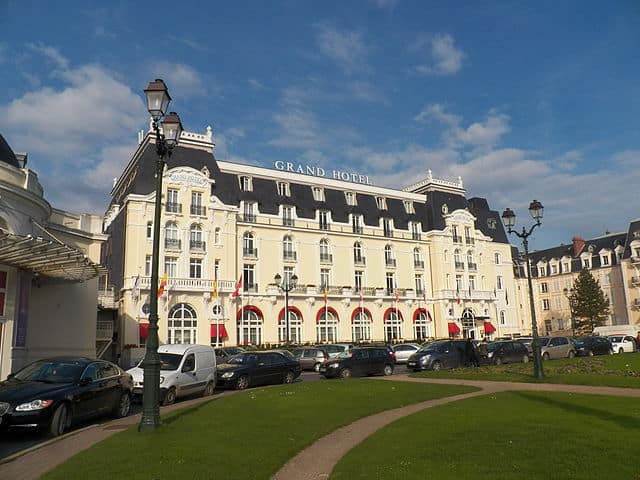 Other than the perfect place for taking a walk in Proust’s footsteps, Cabourg features quiet and sandy beaches waiting for you to sunbath on.

If you’re there in late July and you’re a music lover, there is also the Cabourg, Mon Amour indie and electronic music festival. If staying at Proust’s Grand-Hôtel is out of your budget, there are camping grounds located just next door!

All of the beaches I’ve mentioned are obviously summertime spots, but as someone who grew up at the beach, I know from experience that the beach in the winter time can be such a serene and peaceful place.

In any case, if you’re in Paris and you find yourself wanting to take a break from the hustle and bustle of city life, these Normandy beaches are the ideal place!

Did I miss any major Normandy beaches? Do any of you know of some more secret places I should visit? Let me know in the comments below!