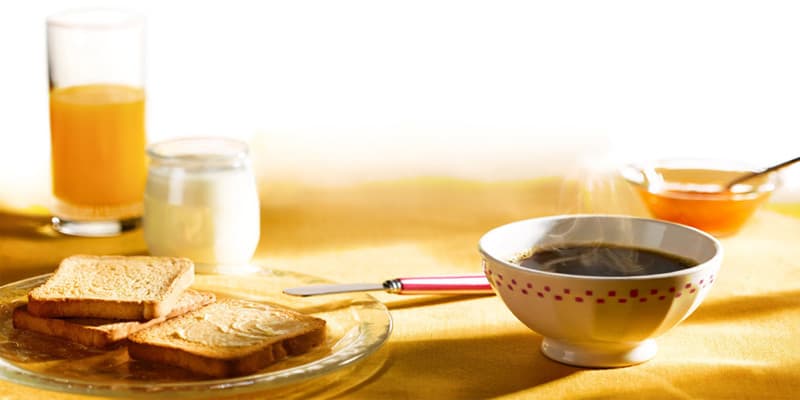 What could seem to be a cliché is not: in France, bread turns out to be the main pillar of gastronomy. The traditional French breakfast would not exist if bread did not. This is a serious story. Read on and find out everything you need to know about the French breakfast! 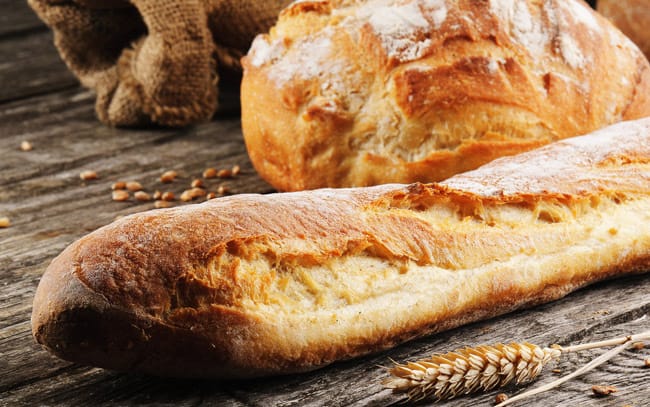 The first thing that you can find in a French breakfast is the bread. The most often, bread takes the form of the baguette. Real French people do not buy their baguette at the supermarket but at the bakery (Find out the best baguettes in Paris). You have to choose between “la baguette ordinaire”, the normal baguette, and “la baguette tradition”, the tradition baguette. The latter baguette is often smaller and wider, but the real difference is about quality: tradition baguette has to be manufactured on the spot, additive-free, and to have never been frozen.

The best feeling ever is when, in the morning, you go out of the bakery with your baguette in the hands, still warm because it was just removed from the oven, and smelling so good that you can’t help but take a bite of it. The second option is the cracker. It is less soft and tasty as the baguette, but it has a great asset: unlike the baguette, you can soak a cracker in your coffee without leaving some crumbs in it, since it is denser than the baguette.

Finally, you have the intermediate option: between fresh bread and cracker, you have the toasted bread. In France, most people have a “grille-pain” in their kitchen, which is a bread toaster. Often, people toast their baguette portion in order to spread something on it.

To spread on the bread: jam or butter 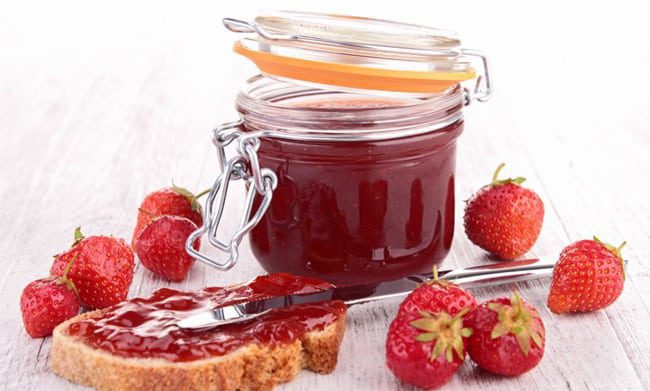 The next stage and second most important element of your French breakfast is to spread something tasty on it. Your first option is jam. We call a toast with jam on it a “tartine”, which in English is often translated by a “sandwich” or by a “piece of toast”, but tartine has nothing to do with it. Many different kinds of jam exist, from the standard strawberry or red berries to peach, bitter orange, rhubarb or fig.

Your second option is butter. In France, you have two sides: those who spread salted butter, those who spread sweet butter. This depends on the regions and the tastes, but what you have to know, in an objective manner, is that salted butter is and stays the best. It gives your bread this salty taste that feels so good; the best feeling ever is when you feel the gains of salt, when the butter is of a great quality.

Here also, you can have an intermediate option: some people spread both butter and jam at the same time on their bread. But there are still rules: first, the butter, to have a solid basis, then, the jam, to give all the taste to the whole.

To soak the bread in: coffee or tea 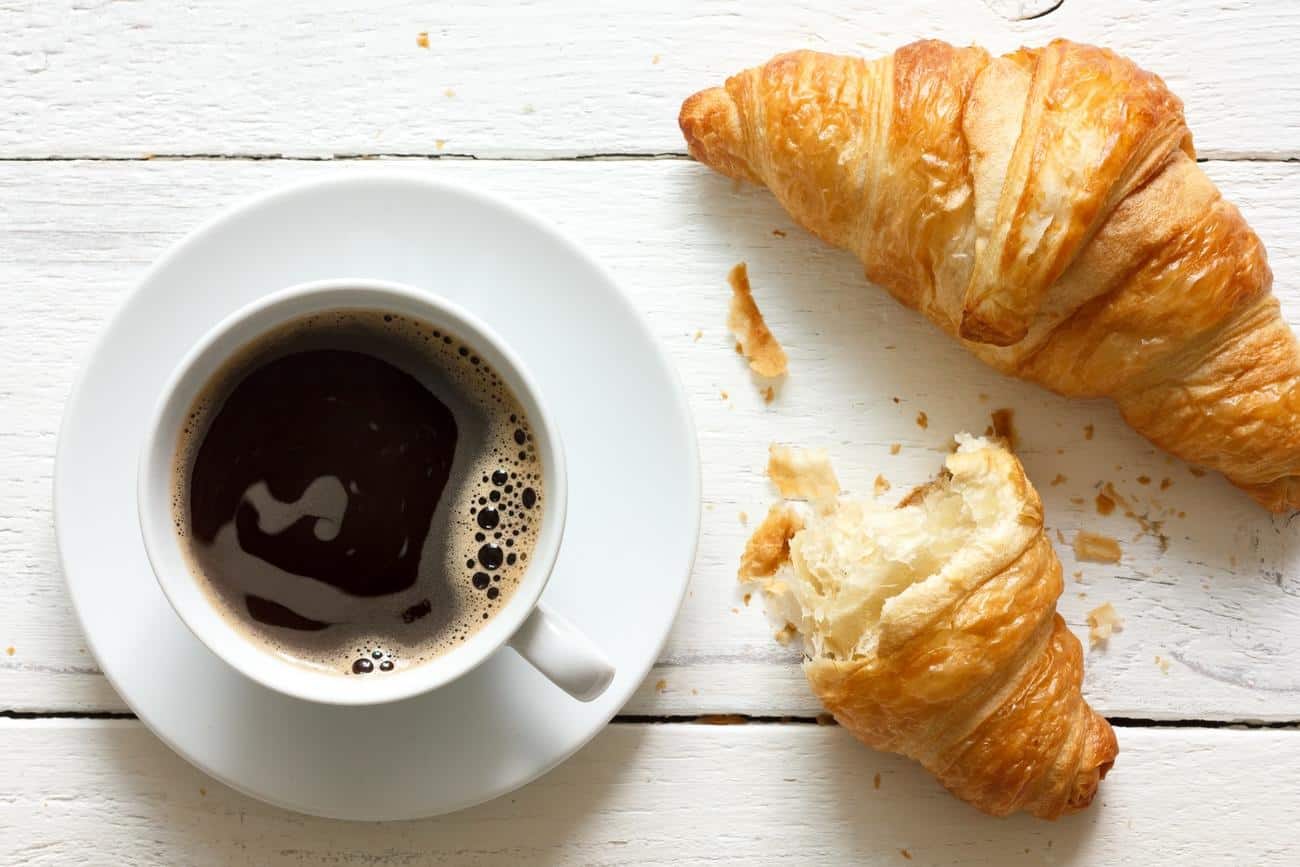 The third stage is then to soak the bread in a hot drink, which is another very important part of the French breakfast (take a look at the best breakfast places). The hot drink can first be coffee. A lot of French people cannot start a normal day without drinking first their coffee. Here again, we have two schools of thought: those who drink strong coffee, those who drink the “café crème”, the coffee with cream, like the latte.

More often, French people don’t have the reflex to drink or serve coffee with milk or cream. Most of them have access to a coffee machine at work or at home and drink its simple coffee. The most common in France is the espresso. 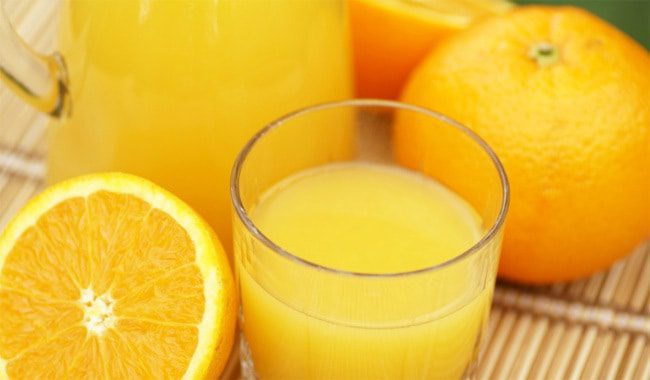 To enhance the flavour of bread: orange or grapefruit juice

Next to the bread, you also need a cold drink to enhance the flavours in your mouth. The French breakfast often includes a fruit juice. A few years ago, you clearly had two sides again: those who drink orange juice, those who drink grapefruit juice. Today we must admit that many other juices are appreciated in the morning by French people, such as apple juice, grape juice or multifruit juices.

The best juice is the fresh-squeezed juice, but, sadly, many people have neither the pressing machine nor the time to squeeze the fruits themselves in the morning, and drink industrial one. But there are many restaurants and cafés where you can find real fresh juices if you ask for it!

As substantial as bread but smells better: croissant or pain au chocolat 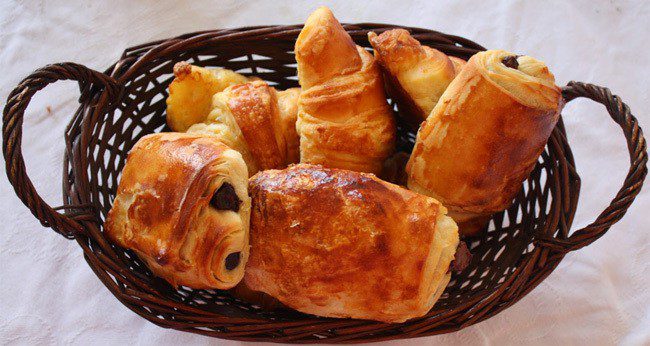 Finally, the French breakfast is also the home place for pastries (our good advices for pastries) – what we call in French “viennoiseries”. Here again, we have about pastries two schools of thoughts: those who eat croissants against those who eat “pains au chocolat”, which are often translated by “chocolate croissants” even if they have nothing to do with croissants.

The croissant is a buttery, crescent-shaped roll of puff paste; the pain au chocolat is a cuboid-shaped roll of puff paste with two pieces of dark chocolate in the centre. Even if the recipes are similar, they taste completely differently. But to tell the truth, most people are not able to choose between these two marvels of life, and just eat both.

The only condition for these pastries to be delicious is to buy them at the bakery. There, they will be oily, warm and fresh at the same time, crunchy on the outside and moist on the inside. You could also find some at the supermarket, but they will be dry and rubbery. Pastries are more usual for a weekend breakfast, but are always appreciated by French people.

Apart from these two, there are other types of pastries that French people like for their breakfast, such as the “pain aux raisins”, a spiral-shaped raisin bread; the “brioche”, a sweet bun; the madeleine; or the “chouquette”, a sort of puff with chips of sugar on it.

So that is the perfect French breakfast: baguette or cracker, jam or butter, tea or coffee, juice and pastries. Sometimes, you can also find cereals, honey, milk and yogurts. 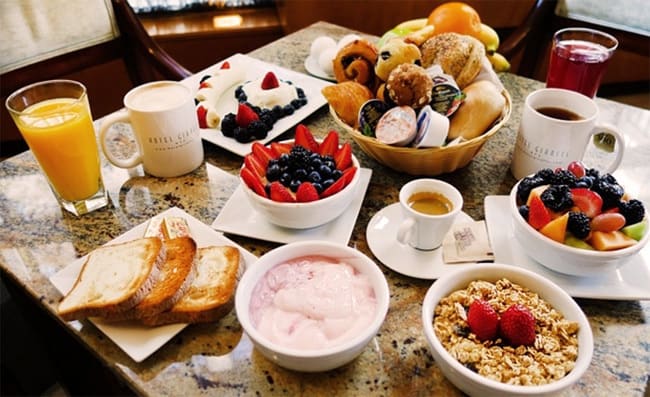 To eat this breakfast, you have many options:

So now you have the starter pack to begin the day as a real French! Discover more by walking with us, which includes a full day tour in Paris. You can also join a food tour to fully understand the French breakfast, or even better a vegetarian food tour!