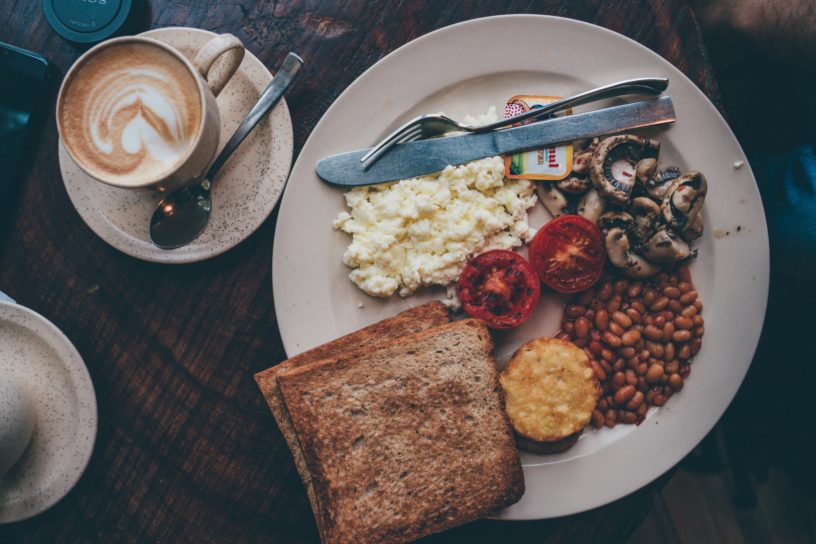 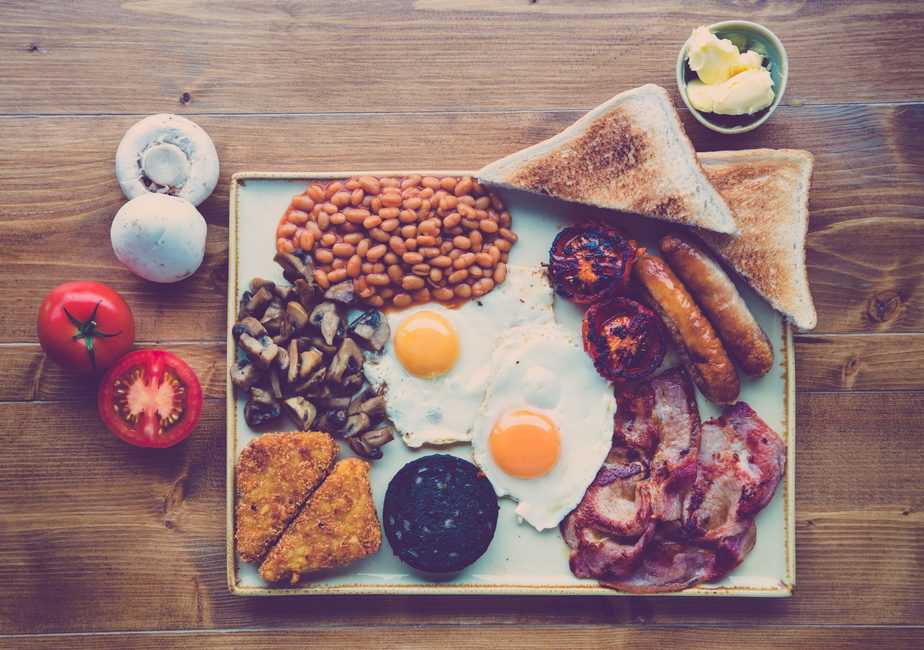 I have spent countless hours going to cafés, ordering a fry-up, and sitting there, with my coffee, enjoying the crispy rashers, under-done toasted-bread, runny eggs, and slimy tomatoes. When you take all of those qualities apart and look at them separately – they don’t sound great. They don’t even necessarily look great. But, when you throw them all haphazardly together on a plate, paper or real, you get a masterpiece. Sure, it could be an abstract masterpiece, but it is beautiful nonetheless.

The runny egg yolk travels over to the tomato juice and mixes in with the fat from the pork. It’s beautiful, and forms a piece of art that should be hung up on the walls of museums for years to come. Introducing; The English Breakfast.

What is the history of the English Breakfast? 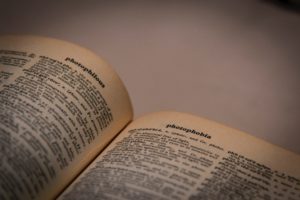 In order to fully appreciate the concoction that is the infamous English Breakfast, we must look at how this came about. A quick history before we dive into the separate components. In the thirteenth century (think back to almost dinosaur time …almost), gentry, who were self-proclaimed protectors of the traditional country lifestyle, anointed themselves as the heirs of Anglo-Saxons. They prided themselves on hospitality, and would provide hearty meals for visitors passing through, and indulging on ‘full’ breakfasts before heading out to hunt or for a long journey.

This super healthy tradition of eating a massive breakfast has carried itself throughout centuries, and has made its way into the 21st century, cementing itself in the English lifestyle. Not like the French, where a croissant makes up half of their daily food intake, or like the Japanese, where healthy noodles and vegetables are their morning snack, the English cram as much fried and savory goodness onto one plate as they can muster; and it is glorious.

What are the ingredients of the English Breakfast?

Now, onto the really important information; the ingredients. What morsels of food were pieced together to create such a masterpiece? We must dissect this plate one by one, in order to see how the separate components are able to form such a beautiful creation – after all, we’re going to need something hearty to soak up all those Carlsbergs from the night before. 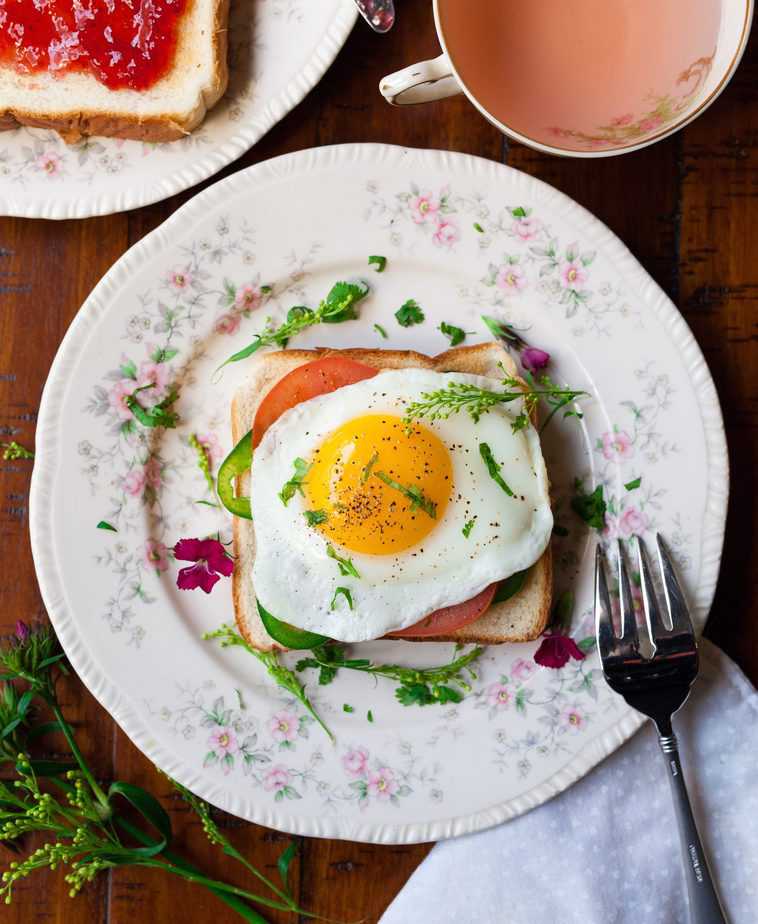 Well, first we start with one of the most important parts – the egg. Crucial, yes. Simple, not so much. You can get the egg cooked in any way that you want, either scrambled, poached, or fried. Please for the love of all things good, do not have a hard-boiled egg with an English breakfast. That is bordering on sacrilegious, and you might be asked to leave the country. If you’re stuck, order fried. It’s the safest bet, and probably the most popular. The runny egg yolk can be soaked up using the bread, and you can mix the yolk around into everything on your plate, creating some sort of egg-running soup. Trust me: the egg makes the plate. 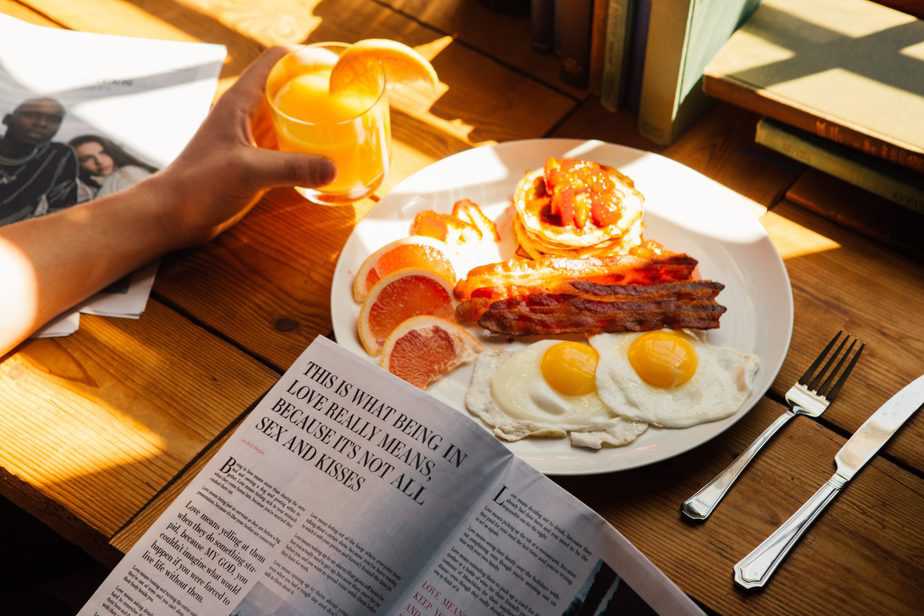 Next up, the perfect complement to the chicken’s offspring. We have sausage, a breakfast staple that crosses the lines of country and tradition to make its way onto numerous children and adult’s breakfast plates.

Don’t get confused Americans if you hear your fellow Brit calling something ‘bangers.’ No, he’s not talking about Miley Cyrus’ album, he’s simply referring to the sausages in his breakfast meal. I mean, hasn’t everyone heard of bangers n’ mash? 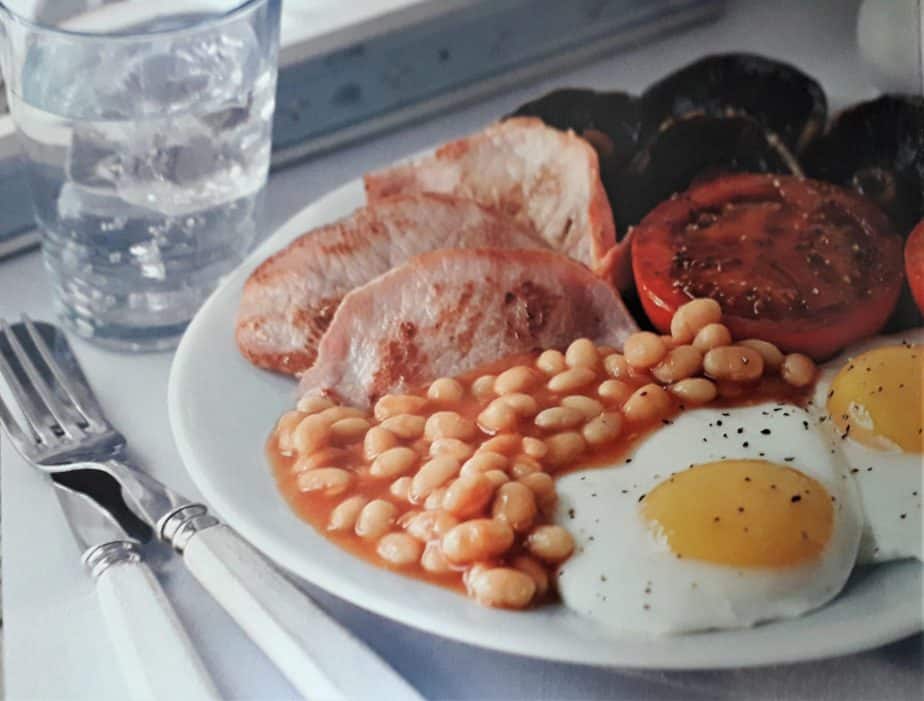 Following the sausages, we have bacon. Now, don’t picture the ‘traditional’ American bacon; crispy, long strips of pork. No, we instead have more of ham-like meat, with slightly crispy edges, but a softer middle section. They don’t come in strips, but rather more resembling a slab of ham. Don’t get me wrong; it is good. VERY good.

The ham – I’m sorry, bacon –  perfectly compliments the textures of the eggs and the bangers, adding a key ingredient to the evolving culinary delicacy. The Brits somehow decided one meat was not enough, and needed to add two, for some extra protein maybe? No, we already have that covered with eggs…maybe to add some ‘healthy’ fats into your diet. Whatever the case, we’re here for it. 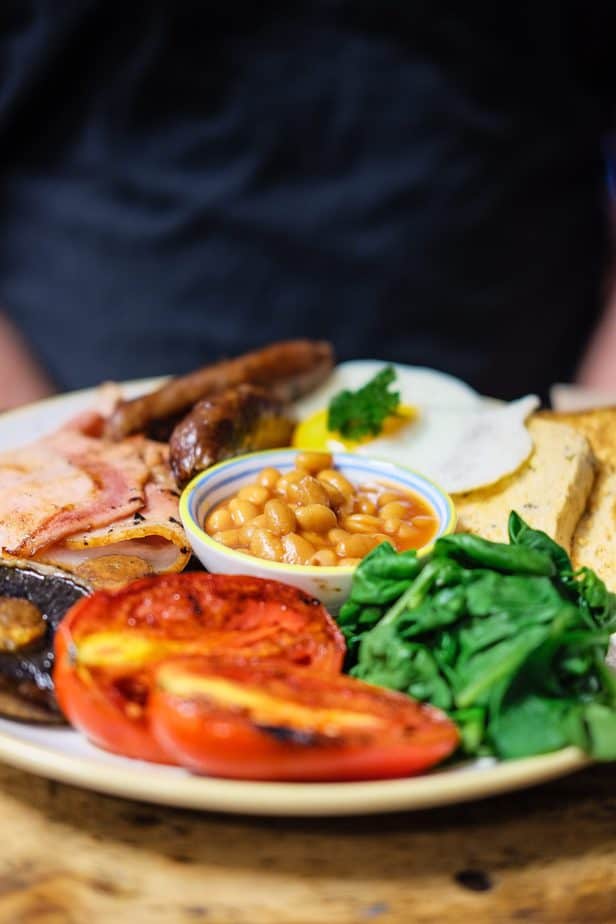 Joining eggs, we have another healthy ingredient on this list; tomatoes. The addition of tomatoes into this dish is not only confusing, but I think personally unnecessary. We’ve already destroyed the possibility of a heart-healthy breakfast, so why even try? However, many applaud the addition of this non-traditional-breakfast-vegetable into this plate, and enjoy the tomato.

You’ll find this presented to you in different ways; I’ve even had the tomato uncooked and sliced, in the corner of the plate. I’d say the most popular would be cut in half, and somewhat cooked, so that it’s  softer to cut and bite into.

The tomato is the overlooked second-cousin of this whole presentation; alone in the corner, but important nonetheless. If you take a bite of a bad tomato, it will ruin your breakfast. Take my word on that. Perfectly cooking this tomato will not only ensure customers to come back for more, but also ensure that your cooking won’t have turned them off of vegetables for the rest of their life. No pressure, chef. 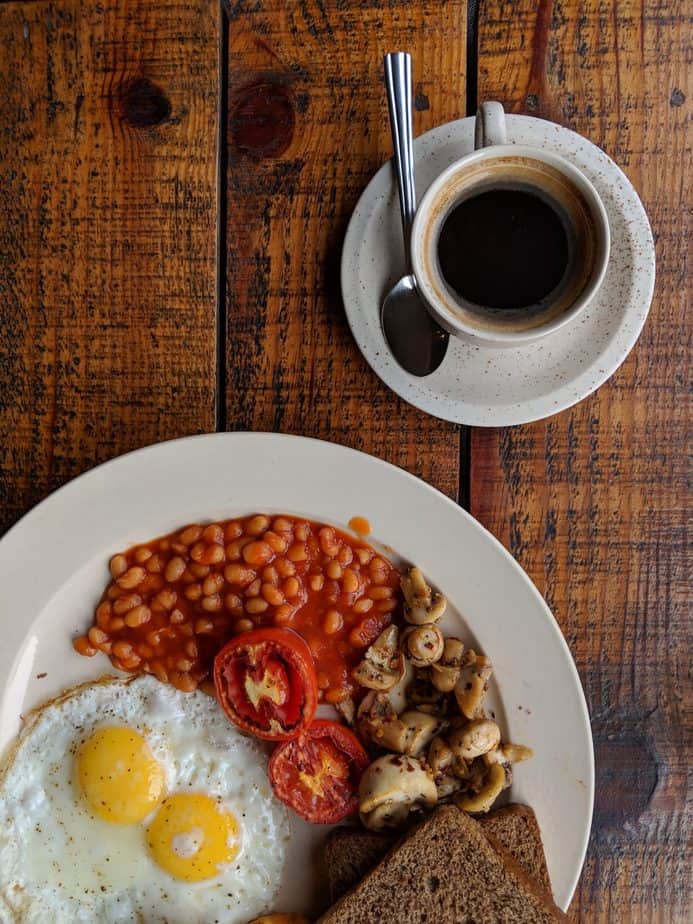 Next up, we have an often neglected item; beans. Now, you might be asking – why do you include beans into a breakfast dish? Well, beans-on-toast is an absolute delicacy for someone living on a budget, and the creators of this extravagant dish decided to include that possibility into an even greater option.

Personally, including beans into breakfast doesn’t really make sense to me, but once you butter up that bread, dump the runny beans onto the toast, and take a bite of a forkful – well, you’ll understand why. Something about the consistencies work well, and it really isn’t as bad as it sounds, or looks.

Most places serve the beans so that they mix in with the other ingredients, and some may not care for bean-flavored eggs or mushrooms. If that’s you, try to accept the beans in whatever shape, form, or container they arrive in, and figure out their place in your world. Make room in your life for the friends who care about you, right? 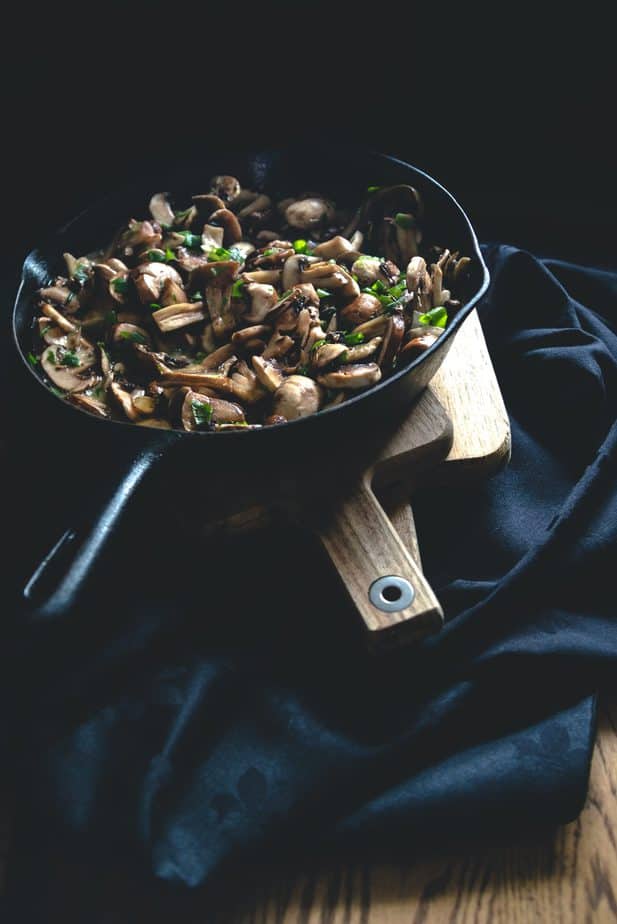 Last, but certainly not least, we have the saving grace for vegans and mums alike; the mushrooms. Mushrooms have never been so versatile; they can be placed on top of the toast to make a half-sandwich treat. They can be eaten in unison with the eggs, eaten alone, or just spread all around your plate to give the appearance you are a vegetarian animal-lover, as you secretly eat bangers and rashers underneath.

Either way, mushrooms are very important in this English tradition. They are usually sliced, smaller mushrooms, and cooked until they are a darker brown, slightly mushy, and absolutely amazing. However, the way cooks make the mushrooms in England is amazing; and they must all have some secret formula, because they are all on the same page. Unlike the tomato debacle, where it’s really hit or miss, I’ve never met a mushroom on an English breakfast plate that I didn’t like. It must be taught in school during the GCSEs.

A Breakfast That Will Reign Supreme for Years to Come

The English breakfast isn’t only an amazing way to start your day, it’s a tradition that dates back several centuries. Don’t feel bad about eating this concoction; if the gentry in the thirteenth century would eat this, so should we – right? It was considered an ‘extravagant gift’ and ‘a feast’ to all visitors that passed through England. This also applies to all workers passing through a café on their way to work, and all family members passing through as they stay at your house over the holidays. Either way – this tradition is a great one, and it’s here to stay. Get cooking!