The best concert halls in Paris 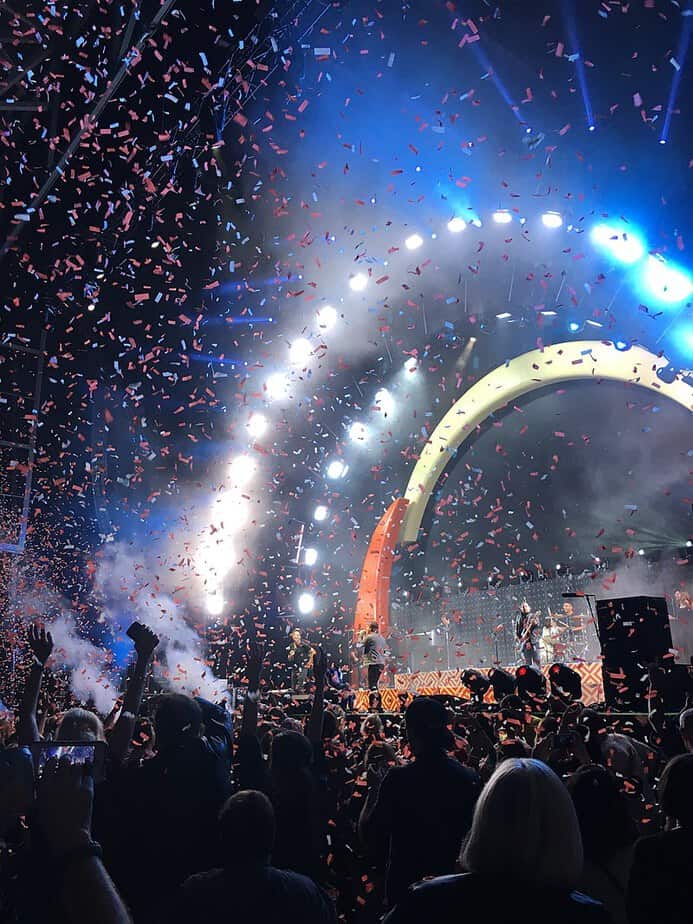 The best concert halls in Paris

Known for the Eiffel Tower, for its unique architecture, for its romantic walks in Montmartre and along the Seine.

But Paris is also so much more than that. It is a dynamic city, in full effervescence. As soon as they’re not at work, Parisians go out. They get busy, find themselves in cafés drinking drinks, going for walks and visiting exhibitions.

There are so many things to do in Paris!

Among them, concerts. Music unifies, relaxes, it makes us travel. The time of a song or show, music puts aside our rhythmic and sometimes tiring life. Parisians love to go to concerts! There is something for everyone! 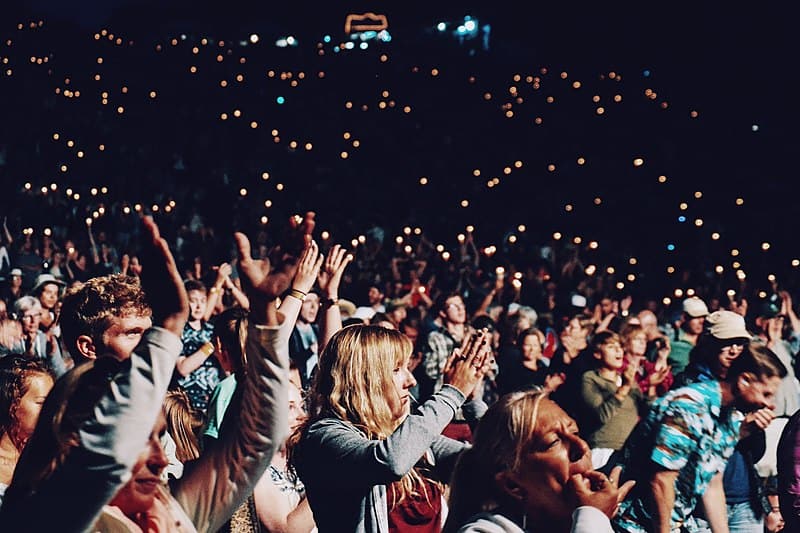 In this article, I will introduce you to the best concert halls in Paris.

In the heart of the cosmopolitan 11th arrondissement of Paris, a majestic building stands out from the others for its Chinese inspired architecture. It is the Bataclan, one of the most famous concert hall in Paris. It can accommodate about 1500 people. 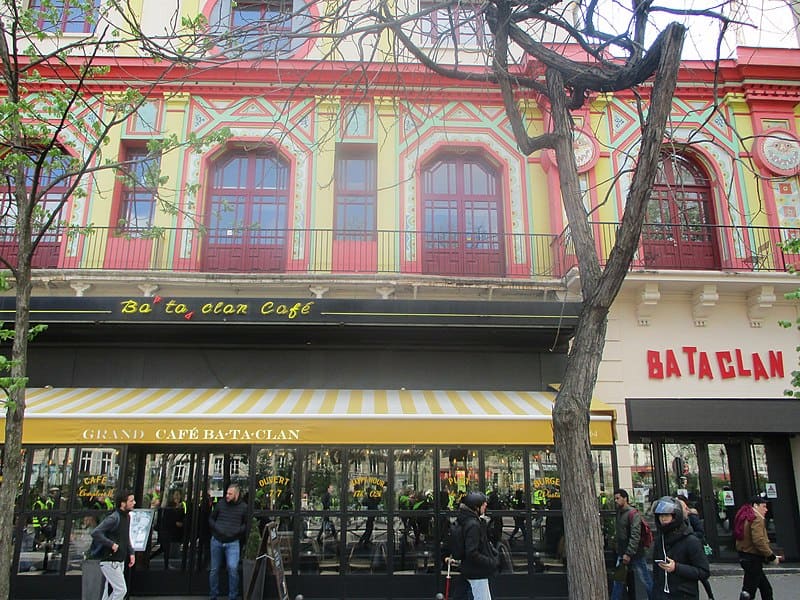 Since the 1970s, the venue has become a very popular place for Parisian nights.

Many French music stars have taken to the stage. It was at Le Bataclan that french DJ David Guetta and his wife Cathy organized their first parties. Le Bataclan has also seen international artists such as Prince, Snoop dogg, Eels, Oasis, The Kills, Stromae, Robbie Williams, IAM. Since a few years now, the room has also been hosting one-man shows of French comedians.

Since November 13, 2015, the Bataclan has become the memory of a tragic event.

That evening, following several attacks on the same Parisian area, three armed men with explosive belts entered the building during a concert of the american music group Eagles of Death Metal. They started to shoot into the crowd of balconies and into the pit. The toll is tragic: 90 dead and several hundred wounded. A few days later, the Islamic State claimed responsibility for the attack. 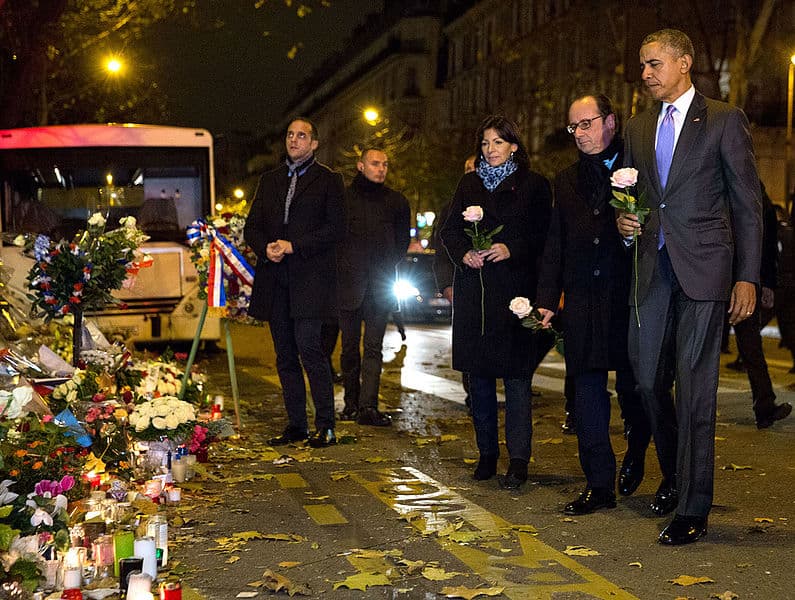 French President François Hollande and Paris Mayor Anne Hidalgo with Barack Obama, stop at the memorial in front of the Batacian, the site of a Paris terrorist attack. Photo from Wikimédia Commons.

France and Parisians are in a state of shock. The venue closes.

The Bataclan reopened almost a year after the attacks, on 12 November 2016 with a concert by Sting. The evening was broadcast the next day on France 2, punctuated by numerous tributes to the victims.

Despite a difficult reopening, the Bataclan has now returned to an almost normal activity. Many concerts and events are scheduled each week and Parisians continue to flock to dance and live to the rhythm of the music. Without ever forgetting its victims, the Bataclan is a sign of resilience: life goes on and Parisians will always continue to go out.

Le Trianon remains one of the last Italian theatres and music halls of the festive and artistic Montmartre of 1900.

It has been registered as a Historic Monuments since 1982.It was built in 1894 in the gardens of the Elysée Montmartre, another auditorium and concert hall.

In 1900, a fire destroyed the hall and part of the outbuildings of the Elysée-Montmartre. The renowned architect Joseph Cassien-Bernard (designer of the Alexandre-III bridge ! ) leaded the reconstruction of the building.

In 1902, the “Trianon-Théâtre” is inaugurated. It will be renamed several times according to fashions and circumstances. If you look at its facade, you might recognize the inspiration from the Grand Trianon in Versailles ! 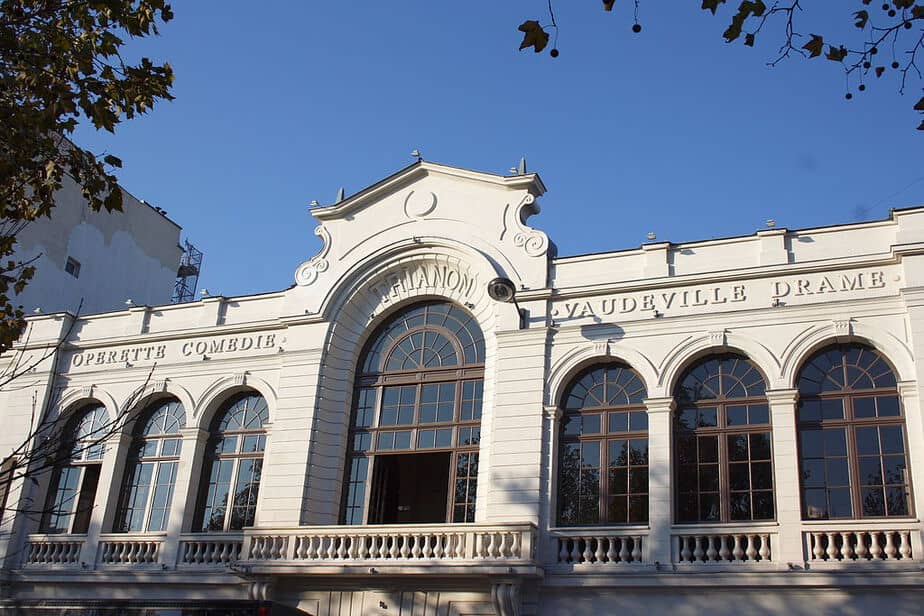 Since 2010, Le Trianon programs a series of  headliners such as Rihanna in 2012, Vanessa Paradis, M, Stromae, Johnny Hallyday, or Pharrell Williams.

Apart from well-known artists, I know that the concert hall also welcomes amateurs. Three years ago I went to see friends who were playing on stage in a music competition.What I remember about the Trianon is that it is a sumptuous room on a human scale, where the audience rubs shoulders with the stage. Guaranteed electrical atmosphere!

It is the largest concert hall in France and the fifth largest in the world. 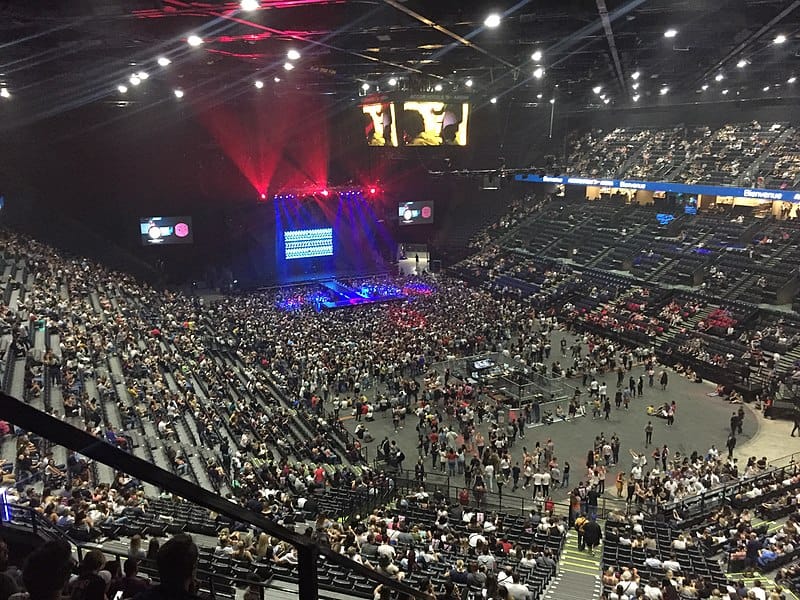 The gigantic hall of the Accor Hotel Arena is filling up for Britney Spears’ concert. Photo from Wikimédia Commons.

The Accor Hotel Arena, very commonly known as Bercy, welcomes up to 20,300 spectators per show, 1.5 million per year. Each year, the hall schedules nearly 140 annual events, ranging from musical performances to sporting events.

The architectural design of the Accor Hotel Arena allows perfect visibility from each of the squares, since there are no support posts in the stands. The venue competes with the largest indoor facilities (indoor room) in the world.

The record of concerts in Bercy for a male artist goes to…. Johnny Hallyday ! He sang 96 times between 1987 and 2015.The youngest artist to have given a concert on the Paris-Bercy stage was Justin Bieber at the age of 17 only !

I once went to a concert in Bercy, and I found it impressive.There is such energy that comes out of the crowd during the concerts ! It’s even more beautiful when the public turns on their phone lights and you take a panoramic view of the full hall.

The mythical hall at 28 Boulevard des Capucines in Paris has seen the greatest stars perform. The Olympia has dedicated artists, forged careers and been the place chosen for the “farewells” of great names in song. 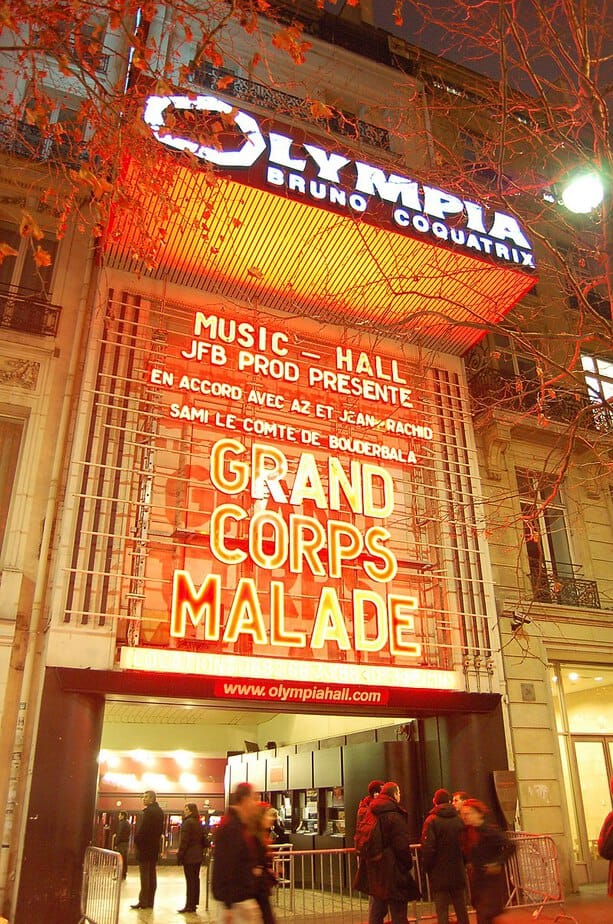 The name of the French artist Grand Corps Malade on the famous neon lights of the Olympia. Photo from Wikimédia Commons.

Still today, all artists still dream of performing there and seeing their names displayed in red neon on the façade.

In 1888, Joseph Oller, a Spanish entertainer, launched the construction of a 2000-seat auditorium: the Olympia.Oller is an emblematic character of the Parisian entertainment world at the time. He was at the origin of the famous Moulin Rouge, still known worldwide for its dancers.

Before becoming the concert hall we know today, the Olympia was first of all a music hall where mimes, clowns, storytellers, comedians, acrobats and magicians followed one another in the same evening.

During the first half of the 20th century, the Olympia faced with a decline in attendance , the theatre briefly became a cinema.After a renovation of the main hall and the designation of a new director in 1954, the Olympia was restored to host musical and artistic performances.

In the 1960s , the Olympia became the most popular music hall in Paris, thanks to Bruno Coquatrix’s (the new director) efforts to restore its image. The audience flocked to see the stars of the time or to discover future talents. All the greats of the song then performed on this now mythical stage: Georges Brassens, Jacques Brel, Léo Ferré, Édith Piaf, Barbara, Johnny Hallyday. The programming is not limited to French artists: the Beatles, the Rolling Stones will also come in the 60s.

The Olympia reputation was made. And it has been growing ever since. In 1993, it was even listed as a cultural heritage site as a “cultural landmark”.

There is so much more to know about the Olympia ! If you’re interested, I highly recommend you to read this article.

Intimate concert halls: a cosy setting to be close to the artist

If you want to approach your favorite singers or groups, I advise you to go to the small concert venues and bars. The concerts are generally warm-hearted , with a limited audience. All the conditions are in place for a real encounter with the artist. Sometimes even, glances are exchanged and make you think that he only sings for you! Don’t tell me you’ve never dreamed of such a situation!

The positive point is that this type of venue programs both headliners and aspiring musicians!

As its name suggests, people come here to dance! (and have a drink)

Located in the heart of the Bastille district, the Café de la Danse is one of the most popular places on the Parisian music scene. Its eclectic and open programming accentuates the conviviality of the place.

Created in the early 1920s, Java is a mythical club located in the popular and trendy Belleville district.

Access is via the Palais du Commerce, an authentic shopping mall listed as a historic monument. Edith Piaf, Django Reinhardt, Sanseverino, Holden and Alice Lewis played in this tiny and warm room.

Today, Java highlights urban music but also organizes intense clubbing evenings. The java club is definitely one of the most emblematic clubs in the capital, with a relaxed and friendly atmosphere.

You now know everything about the best concert hall in Paris. Now there is no excuse for you not to mingle with the Parisian crowd for a concert that will forever mark your stay in Paris!

I hope you enjoyed reading this article, let us know if you have any question !

And if you are interested in exploring Paris’ neighborhoods and experiencing them like a true Parisian, know that some locals are giving free tours to make you discover the hidden gems of their neighborhoods; click here to read more.