The Best 2 Star Hotels of Paris

The Best 2 Star Hotels of Paris

Visiting Paris on a budget doesn’t mean you have to relinquish accommodation quality. Many people are pleasantly surprised when they learn just how many 2 star hotels there are around the central arrondissements that offer impressive space at low cost.

The feeling is that in the city of love, staying in the lap of luxury is to be expected. There are an abundance of impressive 5, 4 and even 3 star hotels around the city of lights to make your stay as comfortable as possible. However, there are just as many 2 star vicinities that don’t take a big leap from the 3 or 4 star establishments. 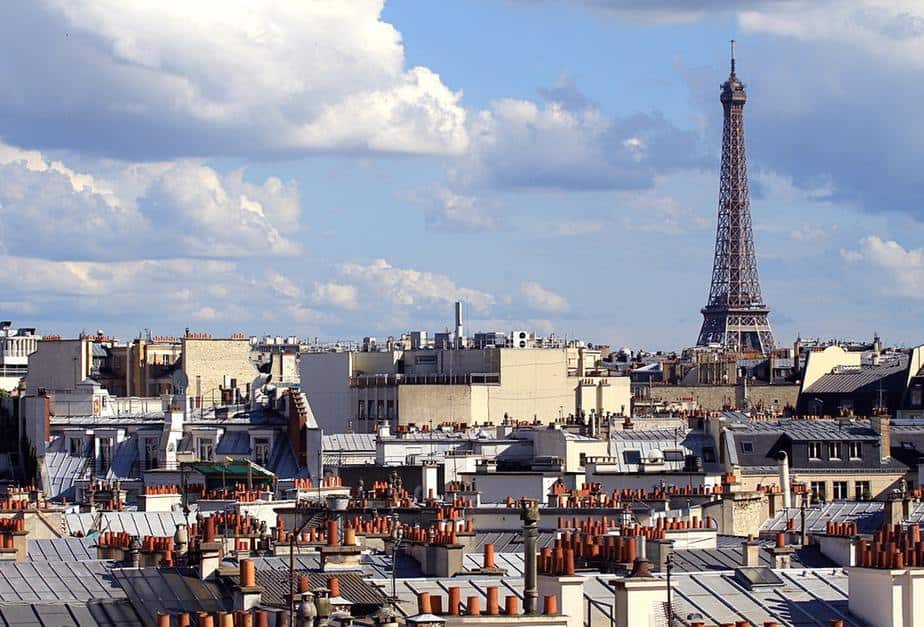 Deciding where to stay in Paris should first be narrowed down to districts. Are you after the bohemian flair of Pigalle and Montmartre? Or the historic resonance of Bastille? Whatever your preference there will be a 2 star hotel suited to your needs not far away.

Here are a few of the best!

Hotel Audran is a down to earth and low-key 2 star hotel in my personal favorite part of Paris: Montmartre.

This neighborhood is the kind of place where you don’t need fancy accommodation as you’ll be spending most of your time exploring what the district has to offer. Your hotel is really just a place to leave your possessions and wash your body from time to time.

Staying here you’ll be in walking distance to attractions such as the Pigalle strip containing the infamous Moulin Rouge. One of my favourite museums, the Musée de la Vie romantique, is a short walk north and one of the best places to lose your mind in romantic 19th century interiors. 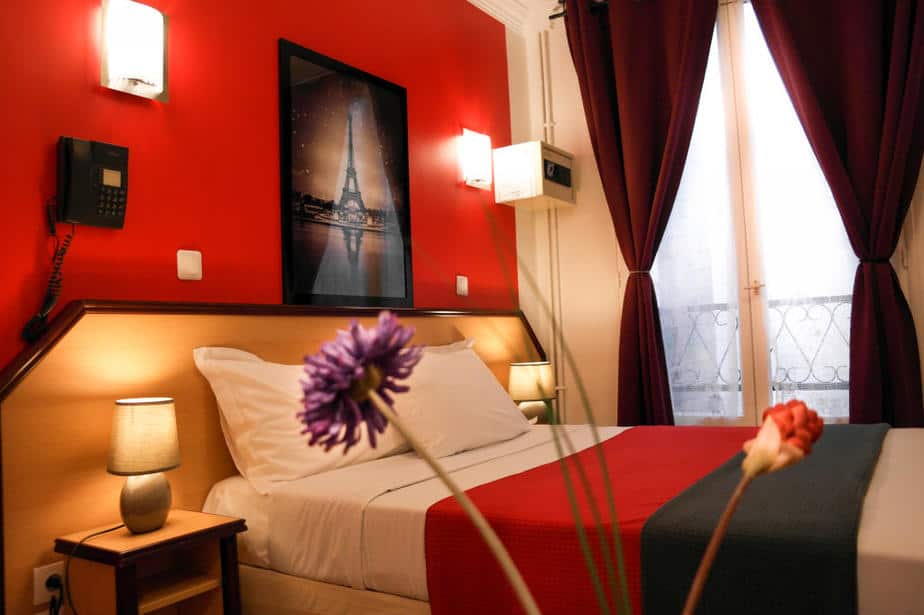 The rooms at Hotel Audran are simple and clean. They do a light breakfast for guests each morning featuring a range of fresh pastries and fruits.

Rue Audran is a popular shopping location for the people of Montmartre so there is always something to see once you leave the building. Montmartre is also known for having some of the most vibrant streets artists in all of Paris. Find them just by walking or join in a free guided walking tour of the area.

For a budget, low key hotel situated on Paris’ Left Bank the Grand Hôtel des Balcons is notably impressive from service right through to design. The kind of establishment that probably needs an extra star next to its name for more reasons than one.

The entry lobby will blow you away when you first arrive. It features period stained glass windows and impressive wood carvings. 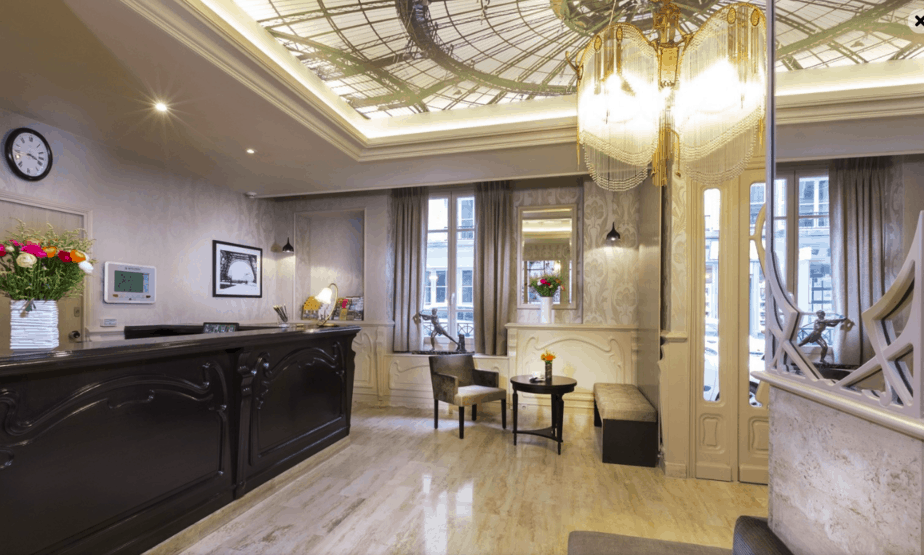 The interior of the hotel is small, but if you desires some extra space request one of the suites when booking. The 19th century floor-to-ceiling windows make the space feel a lot bigger than it really is.

What’s more impressive (and rare in Paris) is that the Grand Hôtel des Balcons offers a reduced mobility room for those who aren’t able to get themselves up the stairs.

The Grand Hôtel des Balcons is situated just to the west of the iconic Cluny Museum. If you’re a fan of fine art then this museum is not to be missed. You can walk there relatively quickly from the hotel.

I usually take a walked through the Luxembourg gardens right after visiting the Cluny. A beautiful space to attempt to wrap your head around everything you’ve just absorbed between the walls of the museum.

Finding a 2 star hotel near Le Marais that doesn’t make your skin crawl isn’t something that happens often. The Hotel de Roubaix is a hidden gem and has been part of the same family business since 1967.

The building and hotel have actually been around since 1861, it’s just the recent owners who have held onto for the last few decades. 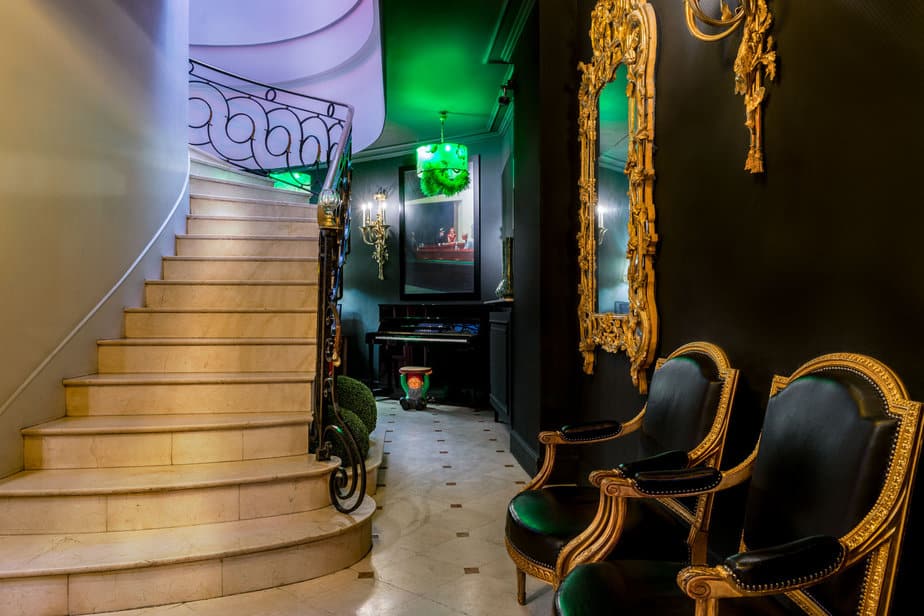 The communal spaces in the Hotel de Roubaix are ambient piano-bar-style spaces that guests are encouraged to make use of late into the evening; night caps and music provided.

The spiraling staircase takes you up to the hotel rooms that are modestly decorated and not too small. For a 2 star premises, this hotel is highly rated and fills up quite easily so don’t hesitate when looking to book.

Back in the earlier years of the 20th century Montparnasse was an affordable district where artists sought to live and work (and play by night). Since it’s grown in popularity it is now less afforded to the struggling artistes that roam the Parisian streets.

Staying in Montparnasse on a budget is doable with this hotel called la Maison. You’ll be a bit of a walk away from the main attractions such as the Montparnasse Tower and cemetery — but part of the district nevertheless. 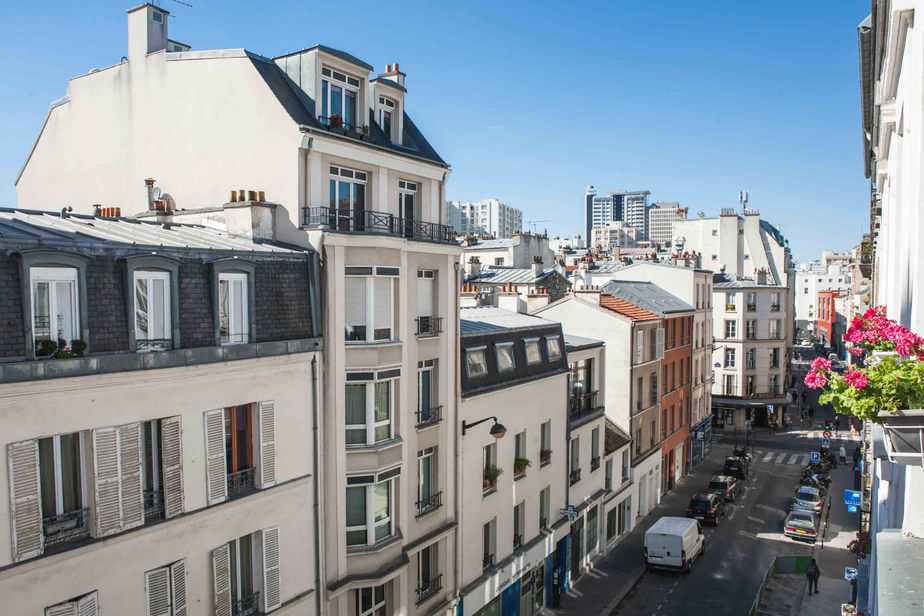 The hotel is pleasant and charming, if I do say so myself. The courtyard is a nice addition to the space and gives guests access to the fresh air as needed. A cup of tea here in the afternoons is something to look forward to.

The breakfast buffet at la Maison is another selling point! Fresh, homey and delicious! 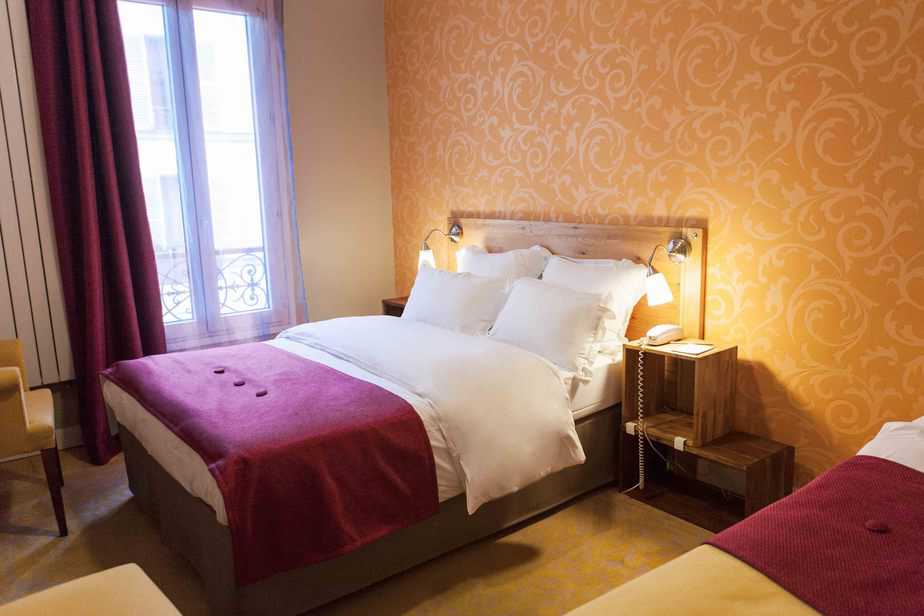 Ill say it again: 2 star living shouldn’t compromise quality, especially in the charming city of Paris! There are many 2 star hotels available around the various arrondissements to give your stay the comfortable touch that it needs.

Take time to sift through the many unsuitable 2 star hotels and you’re bound to uncover another gem or two somewhere along the way.