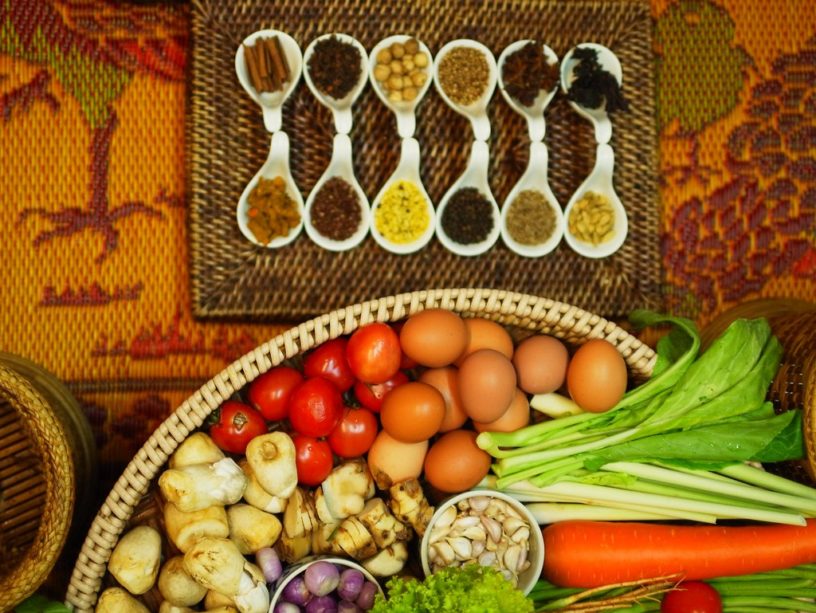 Image by zach6 from creativecommons.org

Thai food is probably more popular and well-known now than ever before.

More and more people have travelled to the country itself, and pretty much every small town across the globe has at least two Thai restaurants these days.

But what makes Thai food so unique? What goes into the many dishes to give them their specific ‘Thai’ flavours?

Well too many to list here in this post, that’s for sure (check out some of our other posts for more insights on Thai cuisine like THIS). But there are a few ingredients, including a few sauces that are pretty much ‘standard’ in Thailand (in much the way that salt and vinegar are in a Fish & Chip bar) that Thai cooks cannot live without.

Some of them are good, and some of them may be a bit more questionable health-wise – especially if over-done — although many agree there is no problem when it comes to taste.

And taste is everything in Thai cooking, which is why there are a multitude of dishes with strong flavours, twists, and tangs – and even the ‘standard’ stuff (like fried chicken or an omelette) is more than loaded with some things you may never have imagined. This is why people from countries where the cooking uses what might be considered more ‘bland’ ingredients and condiments tend to find Thai food an amazing explosion of tantalisingly wild and strong flavours.

So this post is not so much about health, you understand – rather taste. Many people believe that Thai food in general is ‘healthy’ due to the herbs and vegetables involved, and the fact that it is largely served with boiled rice. Mmm.

There’s no denying that in many ways that could be true, depending on other factors like who is doing the cooking, how much of each ingredient is used etc., the oil involved, and so on.

And for many Thai street vendors it’s not just taste that is important, there is also the economic aspect – which is one of the reasons we have suggested in some of our previous posts that the ‘street’ options in Thailand are not necessarily the best options.

You might be surprised at some of the ingredients, as well as the amount of them, that go into something like a simple omelette, for instance. (We are talking heaps of monosodium glutamate here, as well as sugar salt, and cheap oil.)

Yet there’s certainly no reason why Thai dishes can’t be healthy, and it is usually a case of getting what you pay for. You can judge for yourself where the following items on our list figure in that.

These 10 items are very widely used in Thailand – in fact you’ll find the majority of them in pretty much every Thai kitchen or cooking area — and at least one of them, if not several, will go into the majority of dishes.

We’ve included the Thai terms for these cooking condiments and other common additions so that if you find yourself in Bangkok one day ordering a dish or two you could try asking them to leave it out.

If you have an aversion to any of these or perhaps have some allergy etc., you can simply say ‘Mai dong sai ______’ (insert said ingredient to finish the phrase). For instance, if you can’t handle chilies by any measure, the phrase would be ‘Mai dong sai prik, khap/ka’ (with the polite Khap and Ka being added to the phrase for male female speakers respectively).

So let’s have a closer look at the 10 essential ingredients used in Thai cuisine. 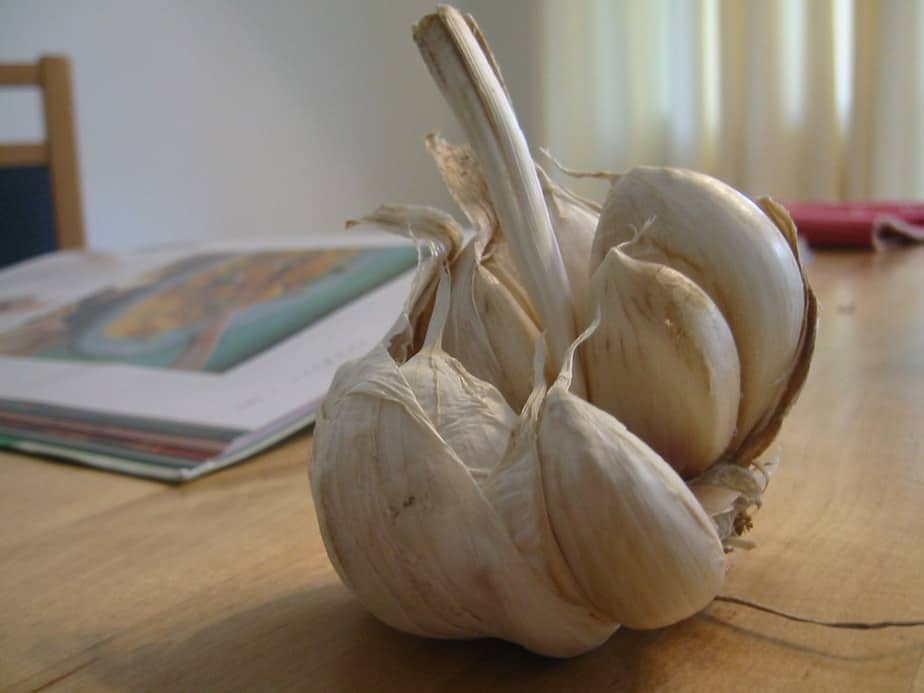 Image by mdid from creativecommons.org

Love it or hate it, this flavoursome and pungent little vegetable that is often used more as a spice is one of the base ingredients of the majority of Thai dishes.

Sometimes it will be ground up with chilies and various other ingredients to form a kind of paste that gives the dish its underlying flavours. Or it may just be added along with the other vegetables and herbs used in much Thai cuisine.

That familiar strong smell that sometimes catches the back of the throat when you walk past a restaurant comes from the first stirrings in the pan with the chopped garlic and chilies being flash-fried first. 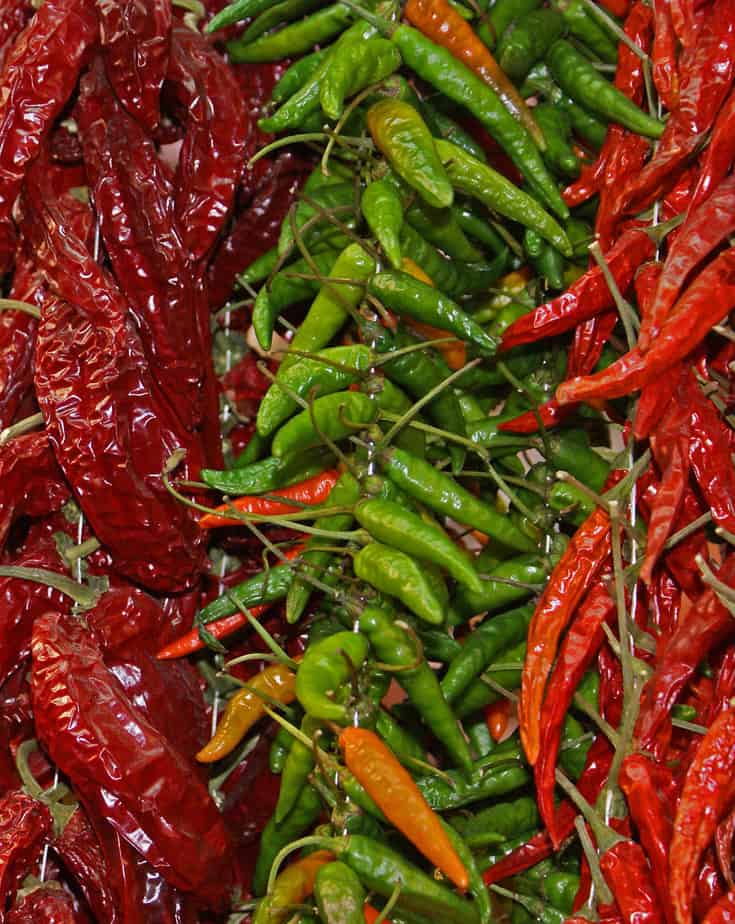 Image by randihausken from creativecommons.org

Chilies form an integral part of Thai cuisine, and are responsible for much of the ‘bite’ and fiery spiciness that comes from the dishes.

They come in various degrees of spiciness with the smallest ones generally having the most bite of all. These should be avoided at all costs unless you already have a good tolerance.

The slightly larger red and green chilies are used in the vast majority of Thai dishes to varying degrees, whether chopped and stir-fried with the other vegetables and herbs or comprising in ground form part of the paste that is used for many dishes. 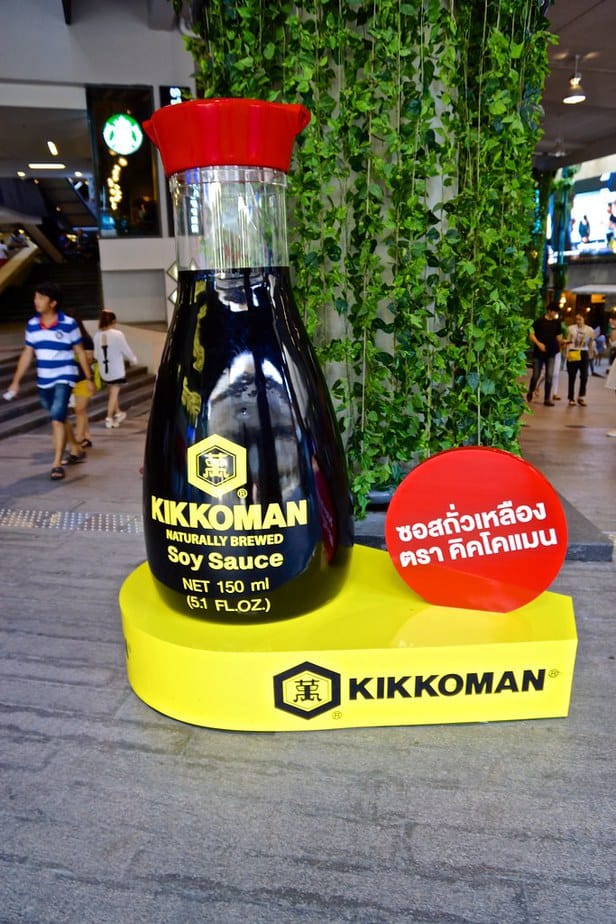 Image by UweBKK from creativecommons.org

Good old Soy Sauce, the dark brown liquid associated with much Asian cuisine. It has a fairly salty tang to it and is used for the actual cooking, as well as many dips etc.

If you weren’t aware already this sauce is made from fermented soy beans (known as too-ah leuang in Thai) and is fairly standard as part of the flavouring in many stir-fried Thai dishes. 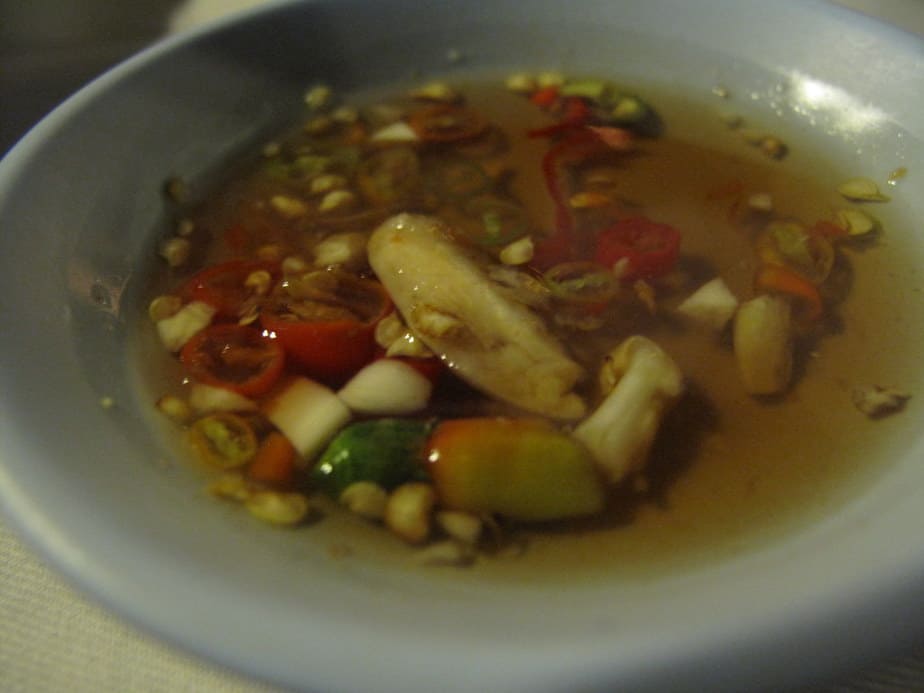 Image by way of slow travel from creativecommons.org

Another strong tasting, salty sauce with a fishy tang to it that is used as both a flavouring of the cooking process and as a separate sauce or dish. If you’ve ever ordered Thai fried rice and got small dishes a light brown liquid and small pieces of chili in it to add to, then this is what the liquid is. Add to your rice dish for extra flavour if required.

Apparently this one is not too good health-wise if overdone and certain health problems with kidneys and such like have been reported as increasingly common in some older people as a direct or indirect result. Certainly nothing to bother the average healthy person though and although it is quite tasty it is not for everyone. 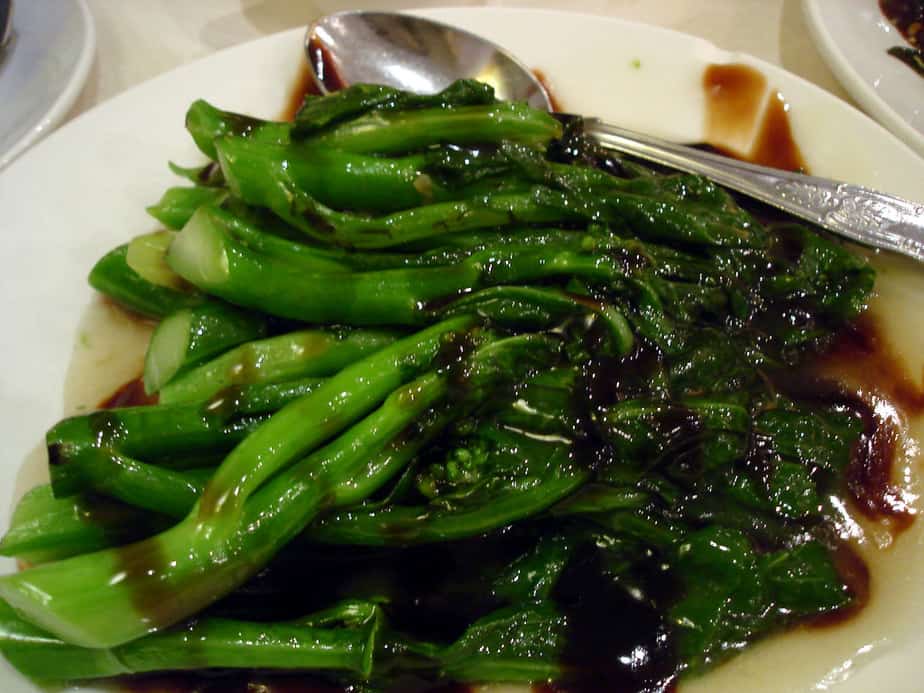 Image by su-lin from creativecommons.org

Another staple cooking condiment and many vegetable dishes feature this flavoursome sauce. Whether or not there are actually any oysters in it or not is debatable, but this slightly thicker, almost gravy-like sauce adds a nice beefy kind of flavour to anything from vegetables to various meats.

Stir-fried dishes that this sauce is the main flavouring of are known as ‘pad namman hoy’ in Thai, which basically means stir-fried with oyster sauce. 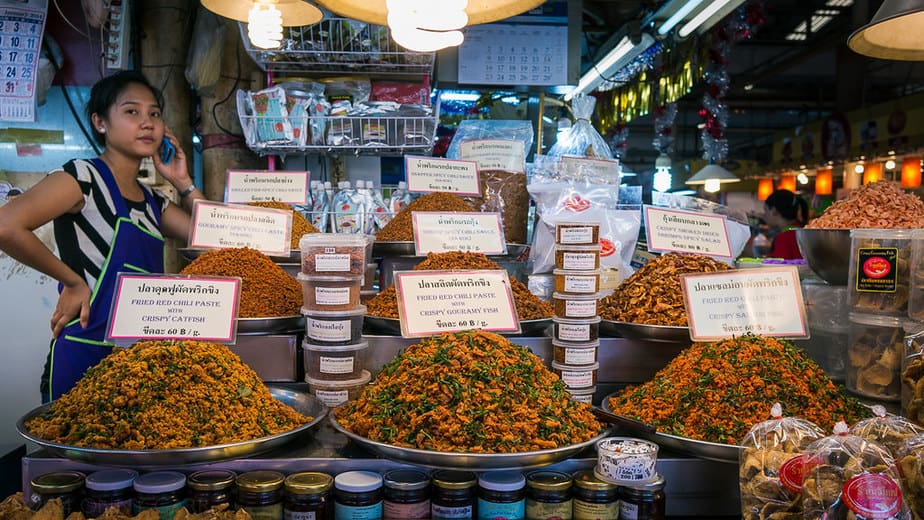 Image by killer turnip from creativecommons.org

There are many varieties of what generally comes under the description of chili ‘paste’ in Thailand. Many of these ‘pastes’ are made in large by the roasting, grinding, and pounding of chilies mixed with a bunch of other ingredients.

These pastes have different colours and levels of spice depending on the quantity and type of chili involved, and are often sold in plastic bags in Thai markets and supermarkets, although many varieties now come in jars, packets, and other forms of packaging.

The various ‘prik gaengs’ are the core ingredients of what is commonly referred to as Thai ‘curry’. 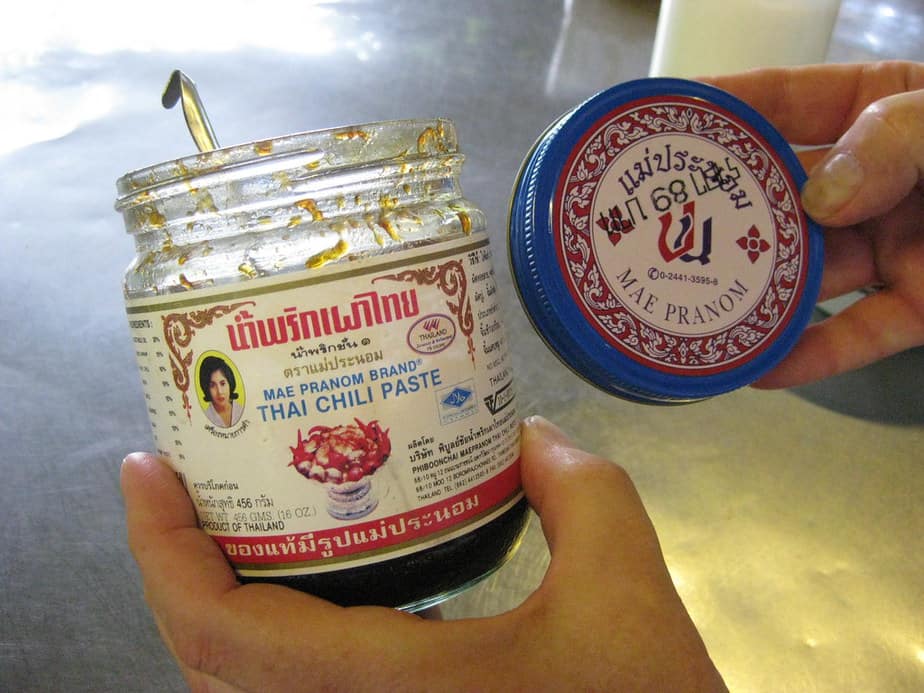 Image by thomas pix from creativecommons.org

So this is a kind of Thai chili paste that comes in a jar, and is quite a bit sweeter than the standard ones. Sometimes known as shrimp paste due to the dried shrimps that go into the mix along with various ground chilies and oil.

The ‘Prik Pao’ dishes that you will see on any Thai menu will be made with this as the prime base flavouring ingredient. It’s one of the milder dishes with only a slight spiciness to it, but it is quite sweet. 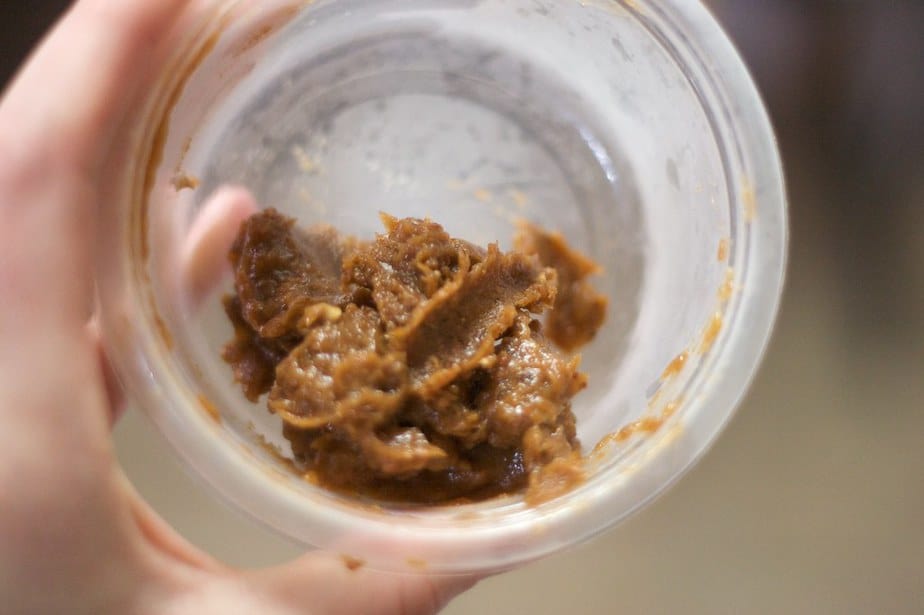 Image by robbplusjessie from creativecommons.org

Again another kind of paste, this time made from tamarinds which are sometimes boiled or dried beforehand but water will be added in some degree. This is the ingredient responsible for the slightly sweet but mainly sour taste that features in many dishes like Tom Yum. 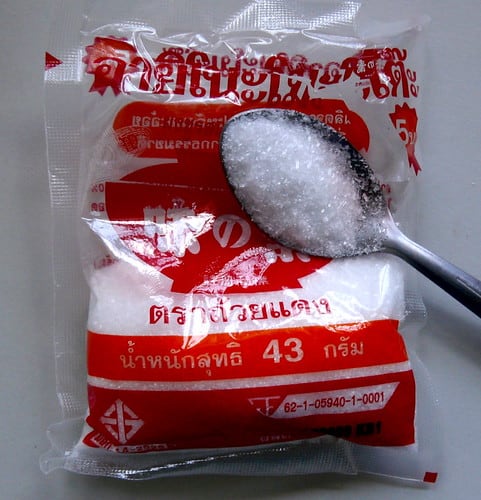 So the last 2 or 3 on this list are the ones most likely to bother anyone who leans a bit more towards the health conscious style of eating.

MSG is used quite heavily in Thai cooking unfortunately, as they believe it adds flavour — which is undeniable –- although not in any natural way. It is not necessarily something that is considered healthful (do your own research), and it features heavily in many ‘packet’ flavourings available in Thailand (like Rod-Dee) that are used in lots of ‘standards’ like omelettes and fried chicken. 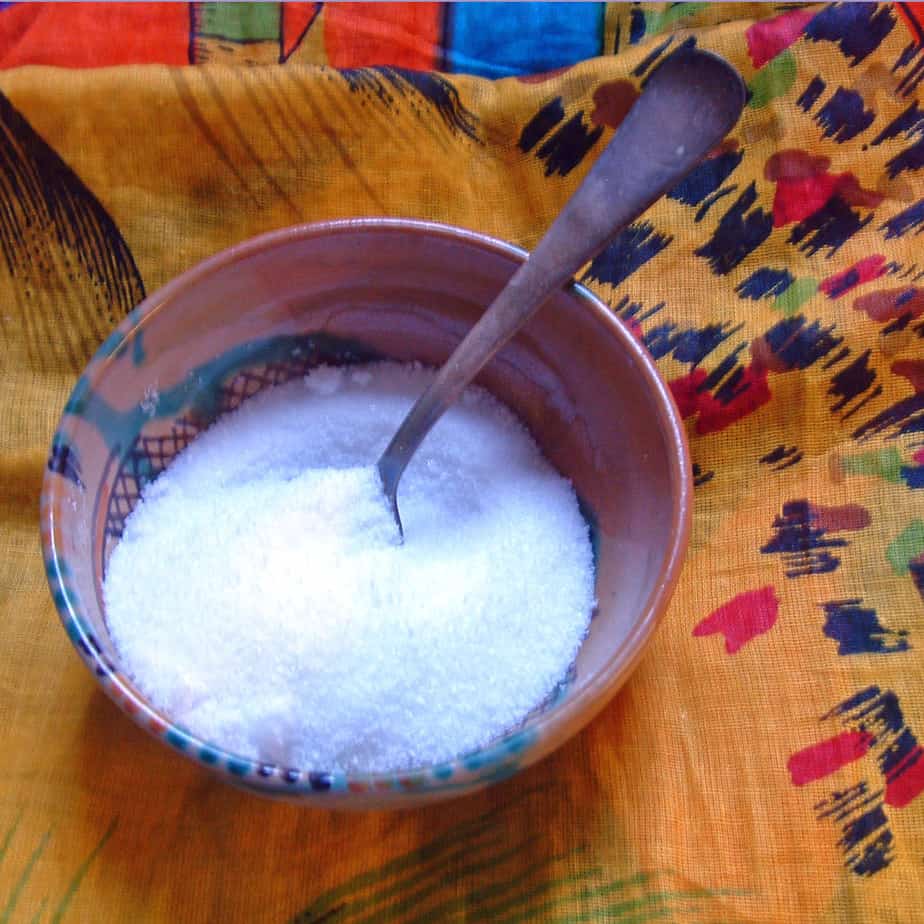 Image by sbpoet from creativecommons.org

OK so there are actually 2 ingredients here, but both are used in pretty much everything, and often to what might be considered alarming quantities.

It’s probably true as well that most cooks around the world use these two standards to some degree in their cooking. But if you were thinking that the green curry was sweet because of some exotic fruit of ground herb paste that had been used – sorry, no – probably just heaps of white, processed sugar.

The same goes for anything a bit salty like an omelette, but the saltiness can come from other options like soy sauce or possibly fish sauce – maybe even a combination in some cases!