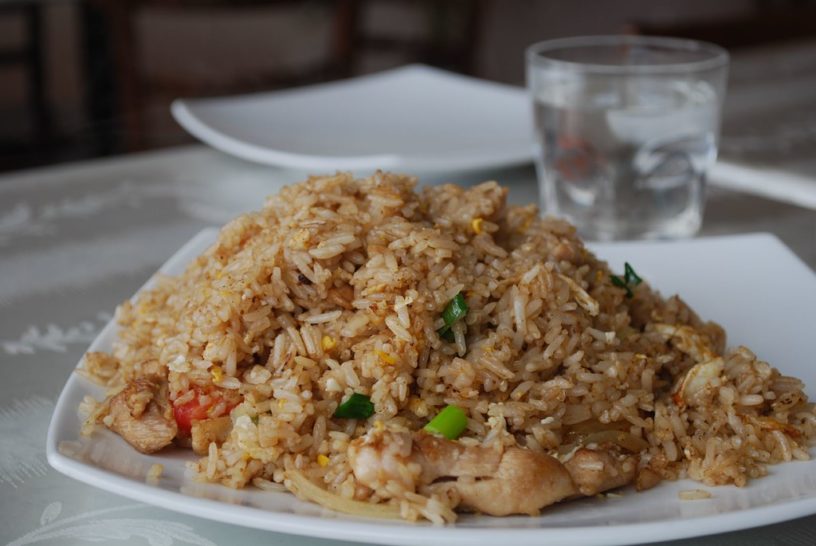 Image by avlxyz from creativecommons.org

Fried rice dishes in Thailand are everywhere, and many have their own particularly Thai twist.

Everyone knows chicken fried rice, right? And shrimp fried rice. How about squid fried rice though? Or maybe a few of the other ‘only in Thailand’ variations that tend to be inspired by or even come from adding other Thai dishes into the mix.

Fried rice dishes (khao pad in Thai) are on pretty much every menu you’ll encounter either in the country or in your local Thai restaurant. This is the case whether you are testing the wares of the cheap & cheerful street restaurants, or dining somewhere a bit more upmarket.

The beauty of fried rice dishes are that they are easy and quick to make. They also tend to be quite diverse, and you will find on occasion (depending on your Thai language skills if need be) that many of the vendors and cooks can be quite adaptable and creative if necessary when it comes to a spot of the old ‘Khao Pad’ (Pad translates as stir-fry, btw, and Khao is rice). 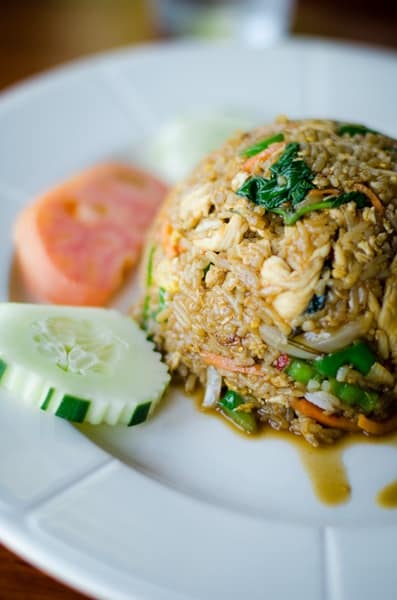 They’ll add pretty much anything into the mix that you ask them too, as it doesn’t put them too much out of their way due to the fact that…well, fried rice is fried rice.

Plant-based eaters may opt for a plate of tofu fried rice, for instance (pronounced tow-hoo in Thai), which is one of the still limited options for non-meat eaters in Thailand, and admittedly not everyone’s cup of tea. (This applies to Thai restaurants in general though, and there have been growing numbers of plant-based options popping up around the city in recent years, yet not exactly in the mainstream.)

The other thing is that (if you are making it yourself) you can use any left-over rice that you may have cooked too much of in a previous meal (providing you took the right steps to save it). And there’s always plenty of rice around in Thailand.

The basic elements of Thai fried rice tend to be fairly straightforward, although they can be mixed and matched or substituted with various other items. All you need for basic fried rice (Thai style) is the rice itself, pre-cooked (or already saved in a box and refrigerated, although many Thais don’t seem to think this is necessary). 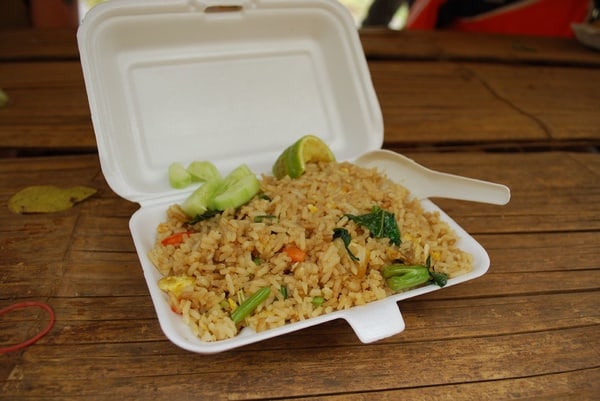 Then you’ll need some garlic, a couple of onions, possibly a couple of tomatoes, and some eggs. Add a dash of soy sauce, and maybe some chilies according to taste or preference. (Many Thai restaurants and cooks not that familiar with foreigners are still under the mistaken impression that they can’t eat spicy food won’t want any chilies in their dish. How little they know.)

That’s the basics – then you just decide what the ‘main’ item in the fried rice is going to be.

This could be anything from simply mixed vegetables, chicken, pork, shrimps, a can of tuna, or just eggs (as in egg-fried-rice). It could even be a mix of various items – get creative! Or yet more diverse, a helping of another dish entirely, just to add some flavour – green curry fried rice being one example that comes to mind.

So without further adoo – let’s have a closer look at a few ideas with 10 variations of Thai fried rice. What you’ll find here is a list of fairly authentic, grass-roots combinations and flavourings that you may not necessarily expect to encounter on the menu of many high-street Thai restaurants. 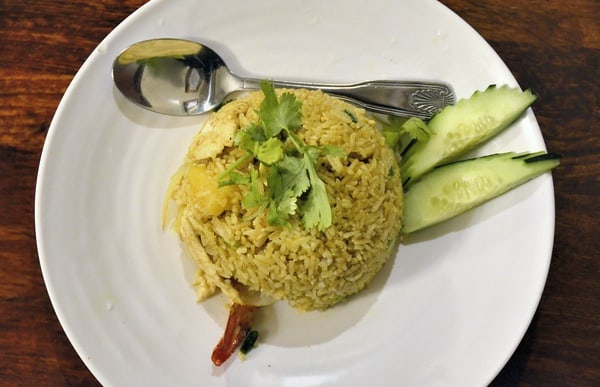 Anyone who has even been in a local Thai restaurant (or, God forbid, taken home one of those ‘Thai Ready Meals’ from a supermarket), should be familiar with the standard Thai green curry dish.

But as an ingredient in fried rice? You bet. You won’t raise too may eyebrows if you ask for this one in Thailand, depending of course on whether they actually have any of that particular dish to hand or not.

As this is a fried rice dish though it won’t exactly be swimming in the curry, rather utilise it as the main flavouring with whatever meat or other ingredient is involved. 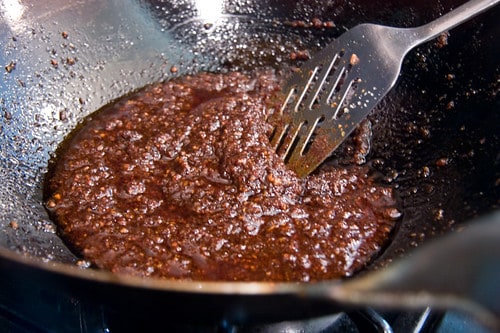 Image by chez pim from creativecommons.org

Yes, you did read that right – ‘hell’ chili paste – which gives some insight to just how spicy this can actually be!

‘Nam Prik’ is a Thai term used to describe a (usually home-made) paste made from grilled and mashed chillies of various colours or descriptions, with a few other ingredients according to the particular nam prik. The degree of spiciness tends to come from the specific chilies used — so from the name you’ll get the idea that the ones used in Nam Prik Nalok are somewhat on the spicy side.

Drop a good helping of this into your fried rice dish and you’ll certainly have some authentic Thai flavours to contend with.

Naem is a kind of fermented and slightly sour-tasting, almost sausage meat kind of pork that is added to various dishes like salads and such like, or eaten alone as a snack. So why wouldn’t it serve as one of the options to contribute to another variation on a fried rice dish?

This particular kind of meat has quite a strong taste to it may not be up everyone’s street, but again it is a specifically Thai flavour in an authentic way.

Goon Shien is a kind of sausage of Chinese origin. It is somewhat on the sweet side, a little bit oily, and is red in appearance. Again it can be added to various dishes like salads and noodles, and is yet another variation on the fried rice theme if you fancy it.

The goon shien is usually cut into thin sliced before being added to the rice. As it is a kind of pre-cooked, preserved type of ‘sausage’, it only needs to be stirred in and briefly stir-fried with the rice and then you’re good to go in just a couple of minutes. Fried rice dishes are basically Thai fast food. 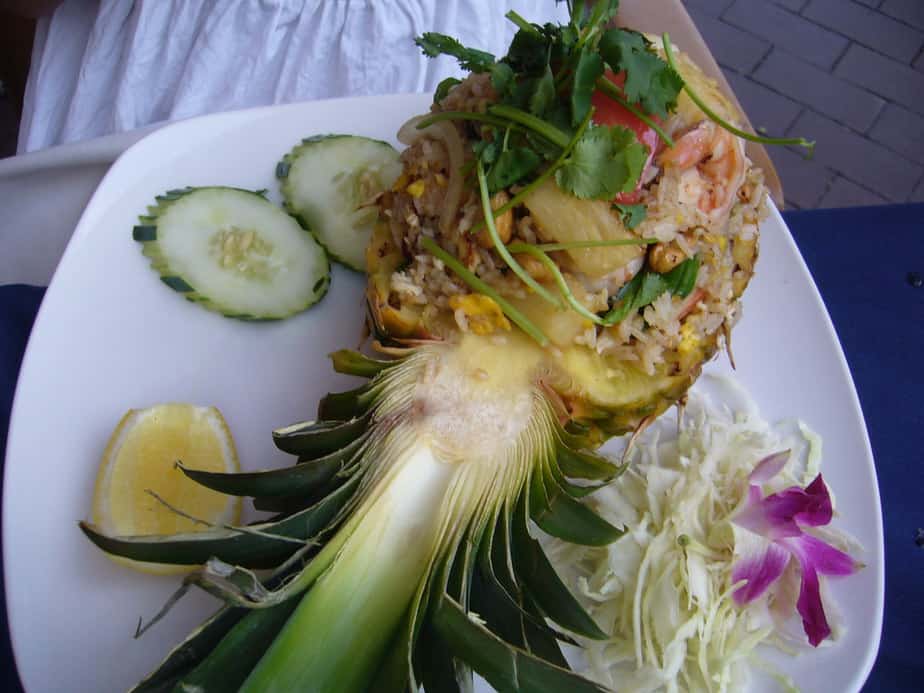 Image by Becky Quan from creativecommons.org

And let’s not forget some of the amazing tropical fruits that Thailand is teeming with – why not throw some of that in your fried rice too?

As it turns out, pineapple fried rice works quite well, either with a particular kind of meat or seafood or with just the pineapple. As you may imagine, this gives the rice dish a kind of ‘sweet-and-sour’ taste, and it is often served in a hollowed-out pineapple in more upmarket establishments.

Pad Pong Galee is the more standard-type curry made that you find in Thailand, made with curry powder (pong galee).

This is another dish that can be added to fried rice in order to give it the main flavour. It is reasonably spicy and is usually made with chicken or shrimps along with onions and coriander that can add a flavourful twist to a simple fried rice dish.

Green Kale (kanah) used in Thailand is often the Chinese variety, and on this occasion it is combined with salted fish and added to the fried rice.

This is another fairly authentic, grass-roots type dish that you aren’t likely to find on the menu of your local Thai restaurant, but is worth a try for something a bit different to your standard chicken-fried-rice. 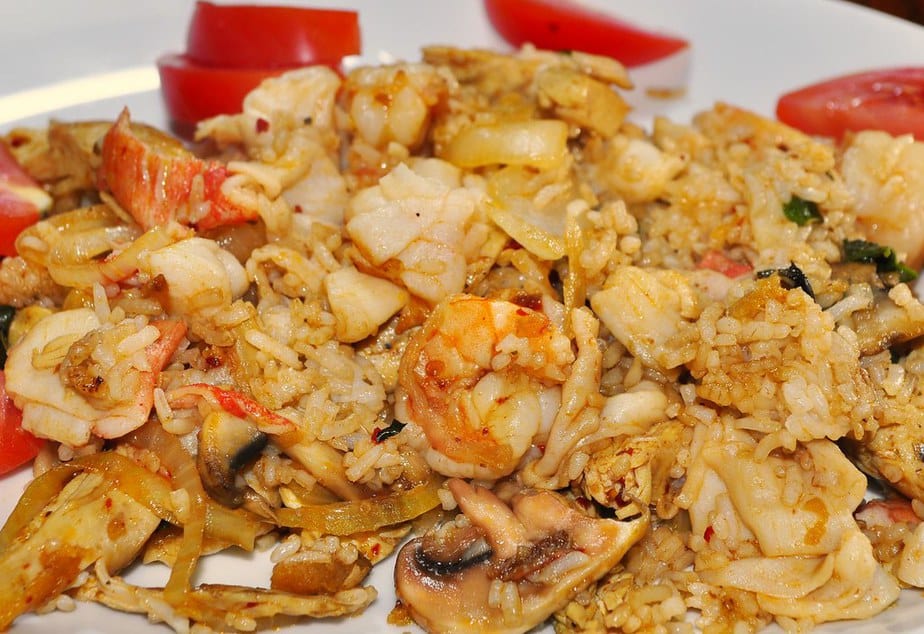 Image by jeffrey w from creativecommons.org

Seafood dishes in Thailand tend to include shrimp and squid (pla meuk – which is the same word in Thai for both squid and octopus so often it is the luck of the draw as to which one you actually get).

There may be some fish in there and it’s usually better if there is, depending on the type used. 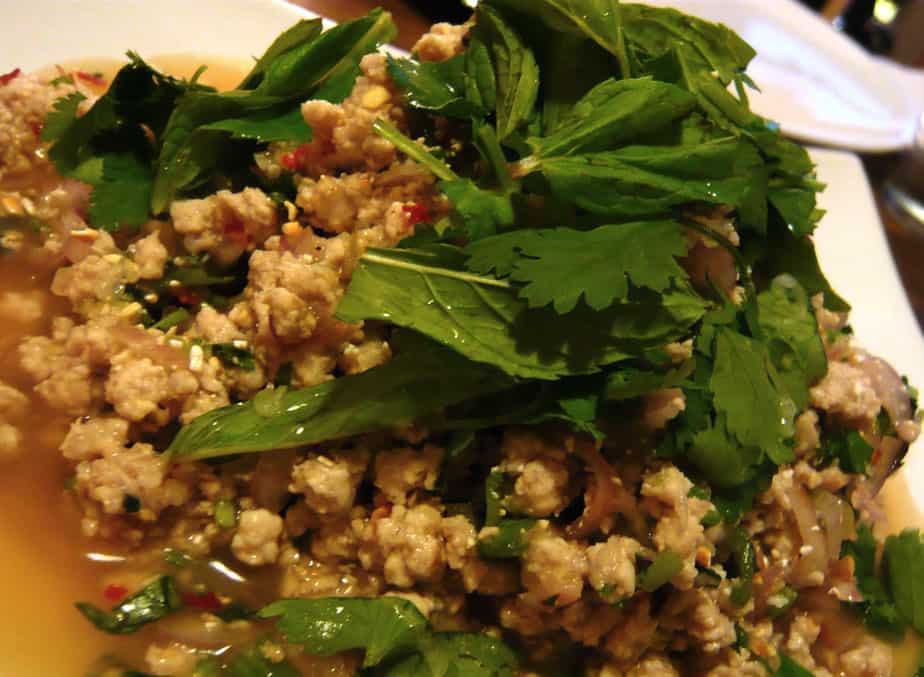 Image by word ridden from creativecommons.org

Laab is a kind of spicy, northeastern Thai dish made from finely chopped pork, beef or sometimes chicken. The word itself doesn’t necessarily translate directly into English but the meat used is chopped quite fine. In this particular case it is mixed with a good helping of pungent Thai herbs (of which there are many) and added to the fried rice.

The result is a strong, spicy flavour with a herbaceous twist that works quite well and makes for yet another interesting variation on the fried rice theme. 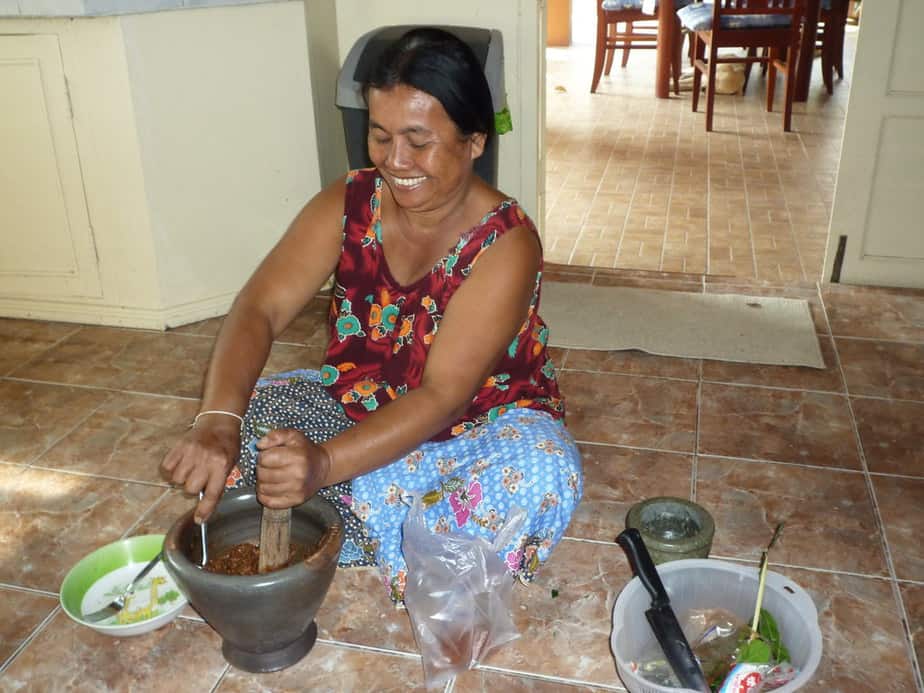 Image by blaise machin from creativecommons.org

This Thai fried rice dish is made with pork that has already been grilled and chopped, along with something called jaew—another type of chili paste that is quite close to nam prik in the way that it tastes and the way that it is made.

Again this is a very ‘local’ kind of dish that has all the elements and flavours of an authentic Thai dish presented in fairly simple terms as fried rice.