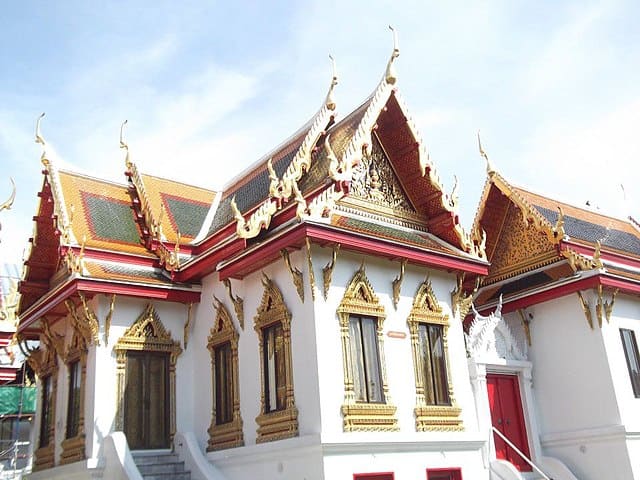 With many things in Thailand there are certain levels of complexity. This applies even when it comes to temples, of which there are over 40,000 in the kingdom.

The capital Bangkok is home to over 400 of them, but what might not be so obvious to many of the visitors who wonder at the craftsmanship and diversity of the temples in Bangkok is that they all belong to a particular designated ‘class’.

Some of the temples were built for, or commissioned by royalty, for instance. Others hold some other special significance in terms of age, design or historical value. Hence we have ‘Royal Temples’, of which close to 300 of those in the country are classified, and there is also a ‘Special Class’. 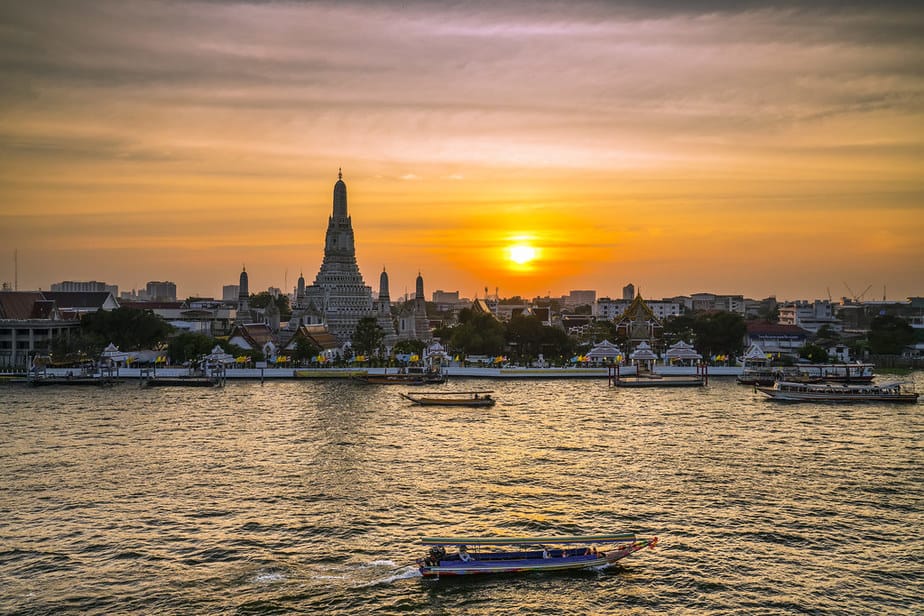 Image by RaymondLing43 from creativecommons.org

Not all of the temples in the ‘Royal’ category are necessarily first class (although the ones included in this post are all listed as both first class and royal temples). Some of the existing second class royal temples, for instance, may be restored versions of formerly abandoned or ruined constructions still deemed to be of some value or significance.

The most obvious example of the Special Class temple is the most important and sacred temple in Thailand — Wat Phra Kaew. This is located on the grounds of the Grand Palace in Bangkok, and is renowned for the fact that it is home to the ‘Emerald Buddha’, which is considered by most Thais to be the highest of all the sacred and revered Buddha images in Thailand.

Following the general classification of whether a temple is a ‘Royal’ one or not, we then have first, second, and third class temples.

The constructions are classified according to age, location, and design (taking into account the cost of any specific materials involved such as gold or marble) as well as the considered level of importance in terms of ceremonial value and service to the community.

So what we are interested in today is the first class, Royal Temples of Bangkok, and these are considered some of the most important in terms of both the city and the country. 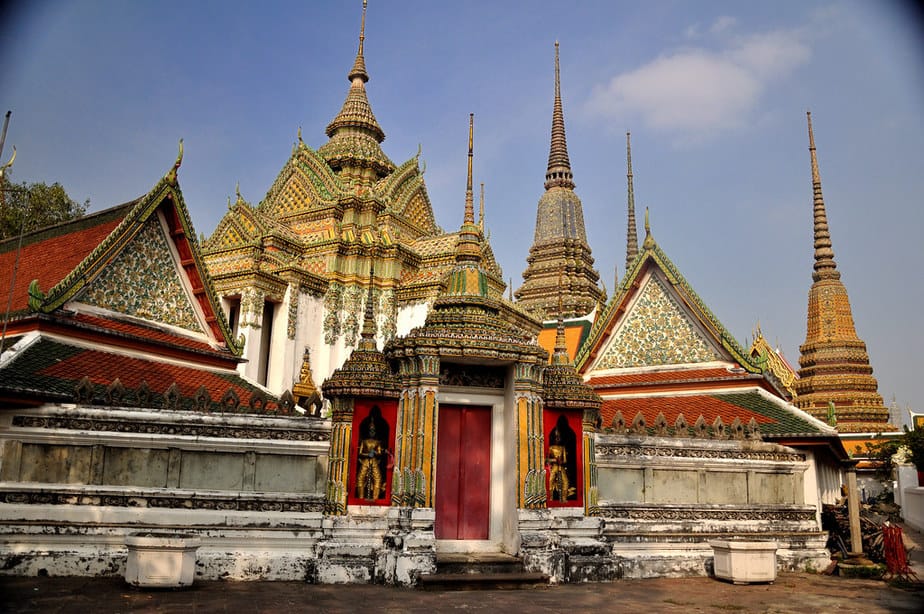 Image by iamrawat from creativecommons.org

This temple, which is obviously much easier to pronounce when using its short name, is usually the first on the list of temples in Bangkok to visit for most people.

This is a historic and important temple in many ways, and comprises an entire temple complex.  Wat Pho is classed as the highest grade of the first class royal temples in Bangkok, and is one of the city’s oldest temples as it actually existed in the region before Bangkok was established there as the capital.
The chapel and the huge reclining Buddha were built in 1832, and the figure is 15 metres high and 46 metres long, making it one of the largest in Thailand. 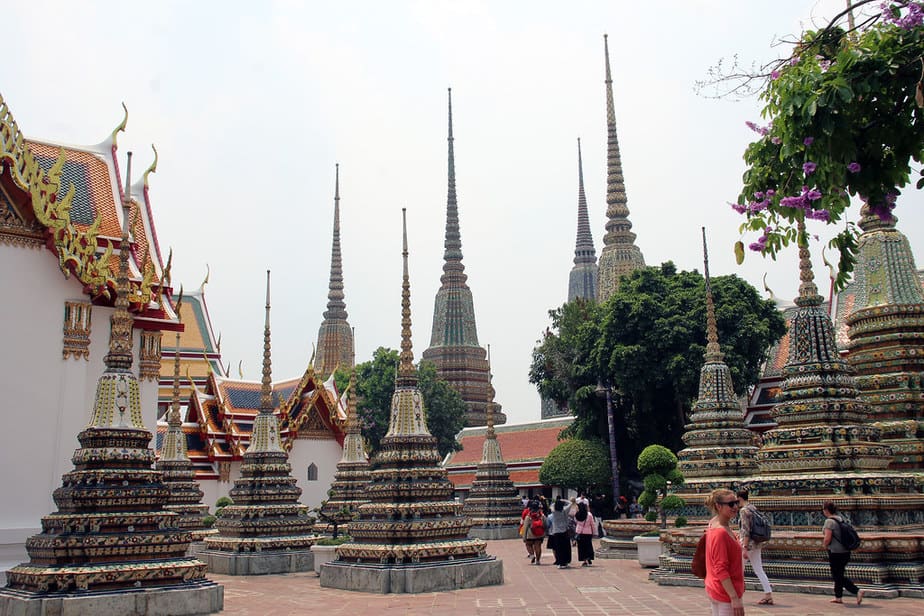 The temple’s collection of 1000-plus Buddha images is the largest in Thailand, and Wat Pho is the birthplace of traditional Thai massage, and is actually UNESCO-listed as Thailand’s first public university. The intricate murals lining the walls of the temple illustrate various different aspects such as constellations, massage techniques and other useful information.

Image by markeht from creativecommons.org

This is an ancient temple with an original name “Wat Sai Thong”, which is quite commonly referred to these days by its shortened name, Wat Bencha, and is located in Bangkok’s Dusit district.

It is another first class, Royal Temple that apparently dates back to the late 1800s. It was designed by the half-brother of King Rama V who was apparently much inspired by European architecture, to the point where he used imported Italian marble in the construction the temple.

The marble was also used for the Carrara pillars, as well as the courtyard, and two large Thai-style lions (singhas) guarding the entrance to the main ordination hall. Needless to say, this wouldn’t exactly have been constructed for anything less than a king’s ransom. 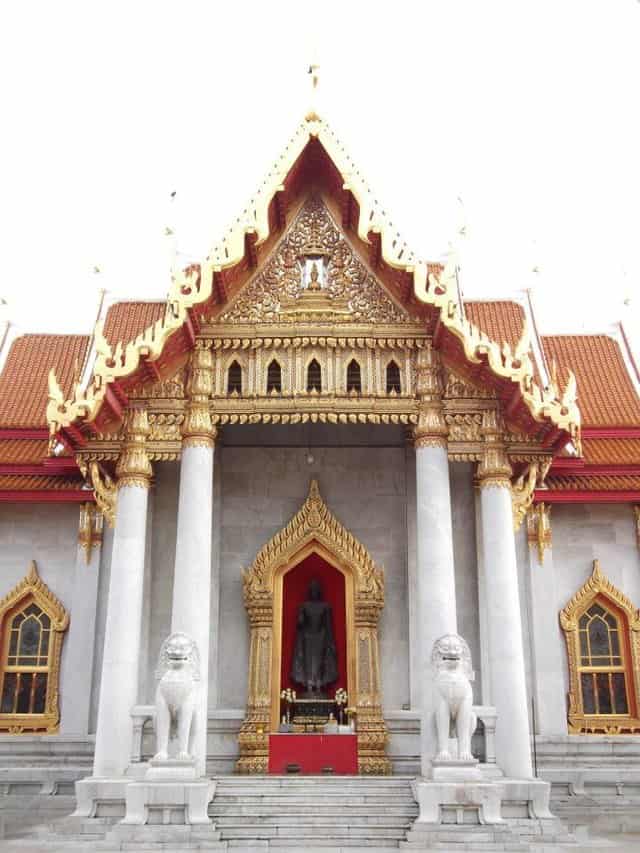 The ordination hall and the aforementioned ‘add-ons’ were the sections of the temple built during the reign of King Rama V with his half-brother Prince Narisara Nuvativongse acting as the designer, and to this day the ‘ubosot’ (ordination hall) is considered a building with incredibly elegant architecture.

As it was constructed and decorated with the best marble from Italy, the temple is quite often referred to as the “Marble Temple”. 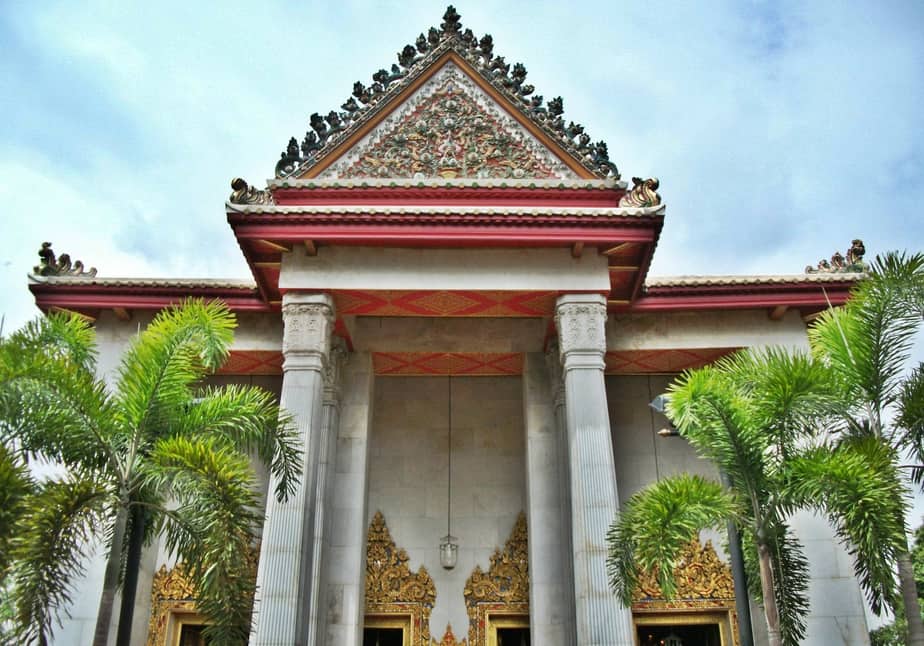 Wat Bowon Niwet Vihara is another one of Thailand’s most important and highly-regarded temples, and another on the first class Royal Temple list. The ashes of various Thai Royal Family members are actually contained here, and some of their relics are kept in the shrine. Notably this includes those of the well-regarded recent King Rama IX who passed away as recently as 2016.

The temple was constructed under the eye of the crown prince of King Rama III and was originally known as Wat Mai.

Various Thai kings ordained as monks for a time in this temple, and at one point in time it was the place where four supreme Buddhist patriarchs resided. In time also became the place where Thailand’s very first Buddhist Institute was established, Wat Mahamakut Ragawithayalai.

The temple is a short 5-minute walk from the famous tourist run Khao Sarn Road, but you won’t actually find too many foreign tourists here in this valued in cultural and historical ‘A-list’ temple. 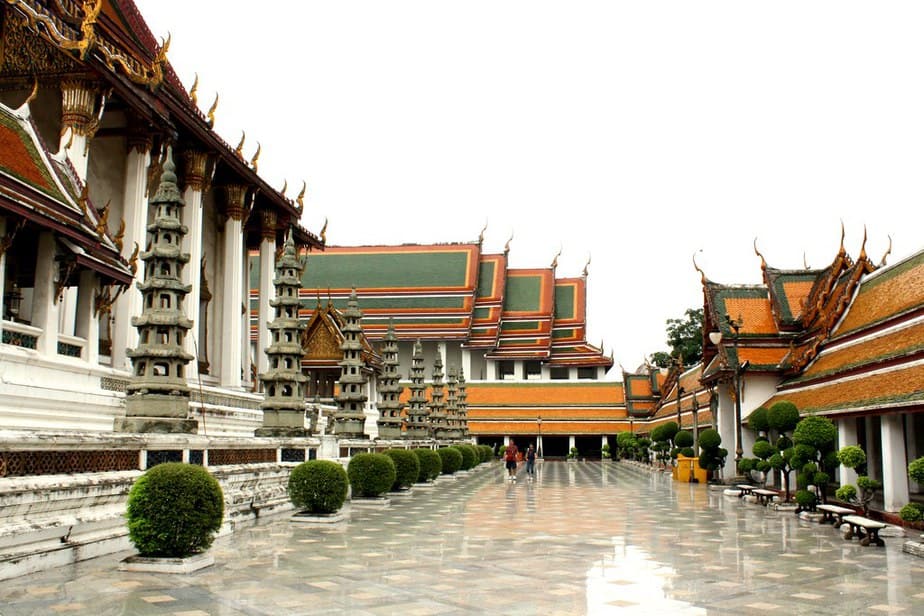 Image by bernieCB from creativecommons.org

Wat Suthat is located in the vicinity of another Bangkok landmark, by way of the city’s Giant Swing. This is another first class Royal Temple that was originally constructed at the behest of the Thai king Rama I sometime in the 19th century.

Like the majority of the other temples in this post, Wat Suthat originally had another name, Mahasuthawat. It wasn’t until the temple had been fully completed in the form that it can be seen today, under the reign of Rama III that its current name was agreed upon.

Large sections of the temple such as the ordination hall have undergone extensive renovations over the years during the reigns of both kings Rama IV and Rama V, but today this temple is most commonly associated with King Rama VIII. 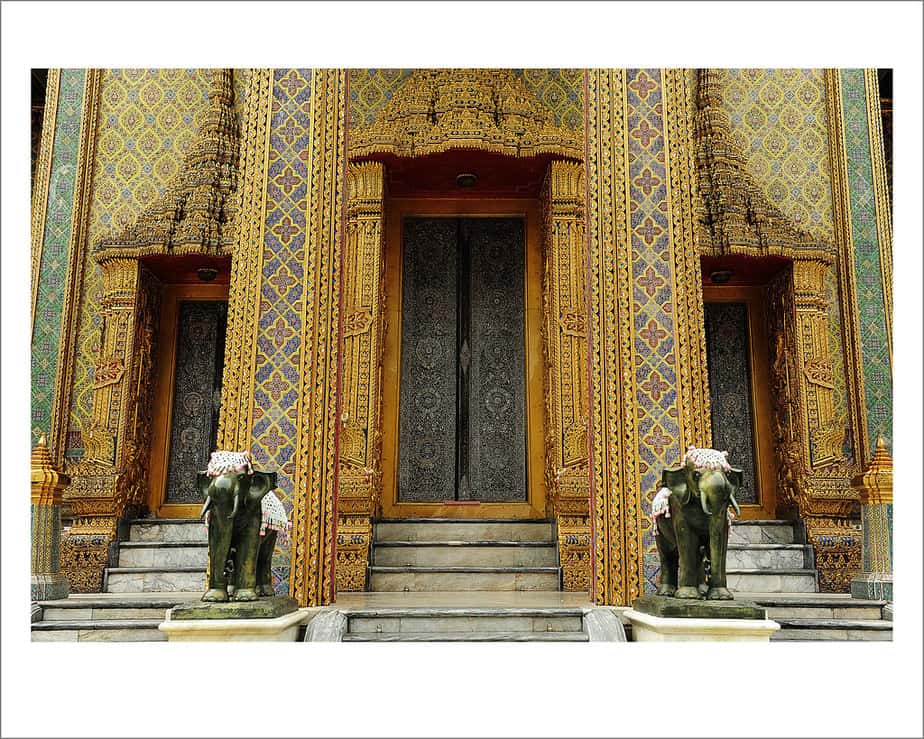 Image by adaptorplug from creativecommons.org

Wat Ratchabophit is located along the Fuang Nakhon Road in the Bamrung Muang area, and is the fifth of our first class Royal Temples.

It was originally built at the behest of King Mongkut to be the the temple of his reign in 1869. This temple features something a combination of Thai and Western architecture. The exterior, for instance, was built very much in the Thai architectural style, although the interior was somewhat bizarrely decorated in Western-style.

There are also 8 stone pillars, each with a tip carved in the Thai Dhammajak shape, in order to indicate 8 directions. It was King Rama IV also apparently decided upon the temple’s existing name Wat Ratchabophit Mahasimaram, which means ‘the temple built by the king’.

This is significant in that Wat Ratchabophit Mahasimaram, was actually the last Royal Temple in Thailand to be built by the king according to the tradition of constructing the temple of his reign. It was also the temple that a significant Thai supreme patriarch resided (Somdet Phra Ariyavongsagatanana). 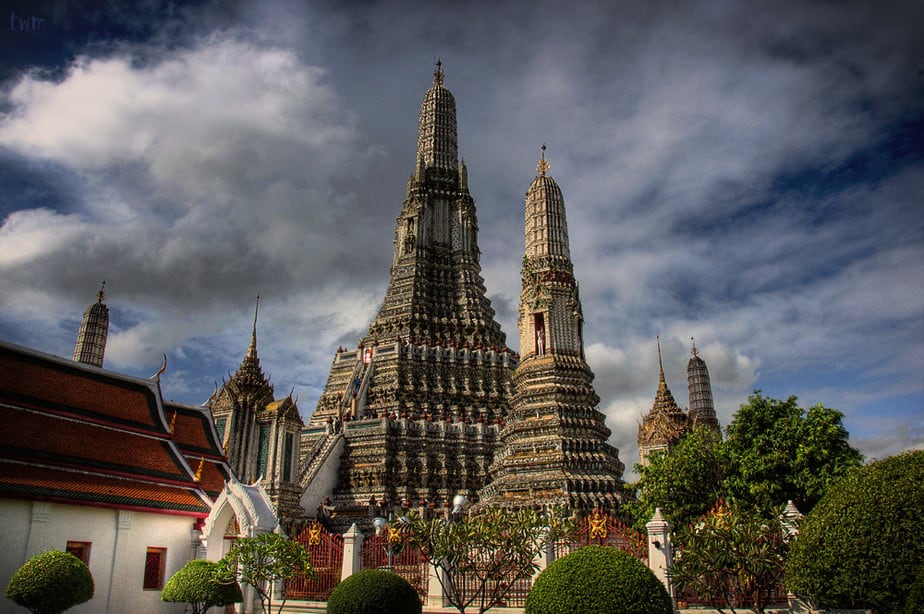 Image by jasonDGreat from creativecommons.org

Wat Arun is possibly the contender for the top slot when it comes to being the most distinguishable and most recognisable iconic seen image out of all the temples in Thailand, and particularly Bangkok.

It has become something of a symbolic image for the city and is undoubtedly at its illumined best around sundown. Certainly the sight of this temple can be one of the highpoints of many an evening river cruise in Bangkok. The temple is located on the Thonburi side of the Chao Phraya River, almost opposite to the Grand Palace and Wat Pho.

Wat Arun is one of the six Royal Temples in Thailand, and in many ways the most dazzling of them all, although possibly the oldest. It stands on the riverbanks of the Chao Phraya River, and has a very distinct and unique shape.

The gilded, 80-metre prang (spire) of the temple stands proud in the sky, and can be seen from a good few miles away. The prang is surrounded by four smaller towers, and the design is very much Khmer-influenced, as was much of the architecture of the days of its construction, which is estimated to be pre-17th century.

Like the other ancient temple Wat Pho, Wat Arun consists of a complex that contains halls, pavilions and hundreds Buddha figures and images signifying various periods from his life.

The temple’s full name of ‘Wat Arun Ratchawararam Ratchawaramahawihan’ is admittedly somewhat challenging for most people. So it’s often called either the shortened Wat Arun, and is otherwise known as the ‘Temple of the Dawn’.