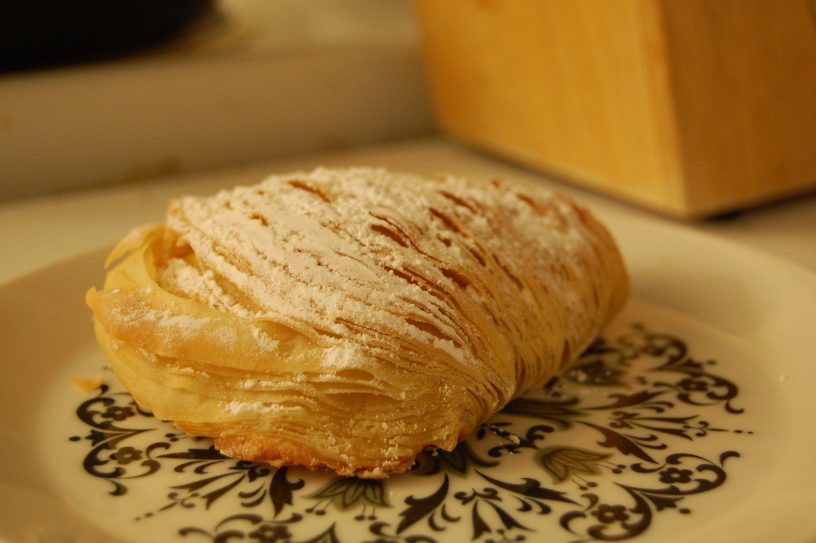 Experiencing Italian cuisine in Italy is going to change the way you see these foods forever.

Food is such a significant part of Italian culture; something that represents happiness, sadness, celebration, loss, family and love simultaneously — and that’s just the main courses!

Italian desserts are a force to be reckoned with. I find the sweet treats of this land to be wonderfully decadent, on par with French desserts in some ways, but nowhere near as rich & definitely light enough to enjoy daily.

When I refer to eating an Italian dessert daily, it’s the tiramisu I’m talking about.

Whether you’re celebrating the end of a meal, or simply in need of a way to kill an hour between sightseeing, settling down for a slice of the nearest tiramisu is like Italian tradition. 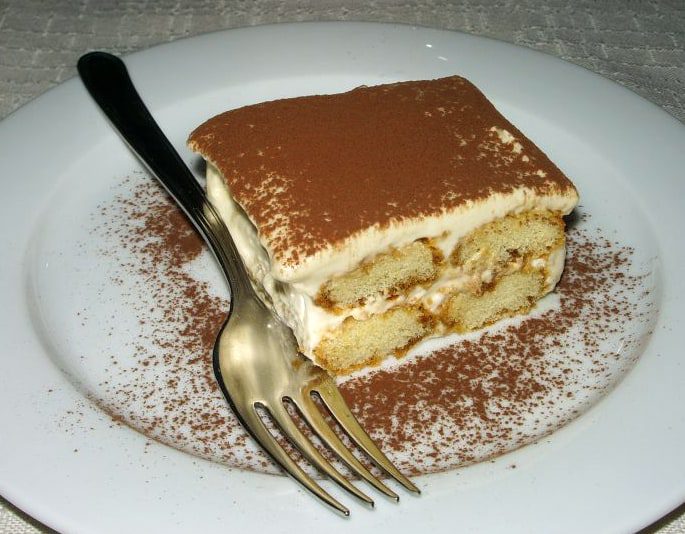 Tiramisu is a layered dessert made using finger biscuits soaked in coffee piled between layers of mascarpone cheese, cream and cocoa.

A bônet is sort of a cross between a custard slice and a biscuit.

Traditionally, a digestive spirit such as rum or Cognac is added to each bônet to give it its heavy flavour. The rest of the ingredients are a mix of sugar, eggs and cocoa.

Each bônet is topped with small amaretto biscuits and occasionally hazelnuts. The treat is served cold and makes a great counterpart to a hot cup of tea or a well-brewed espresso.

This next dessert hails from Naples and translated into English, sfogliatelle means ‘lobster tail’.

Looking at the shape of this dessert, you’ll understand where the name came from. Sfogliatelle are made using layers of crispy puff pastry that bundle together in a lobster-like way, though some will argue they look more like a stack of leaves.

They are filled with a delicious mix of ricotta cheese, sugar, eggs and candied citrus. 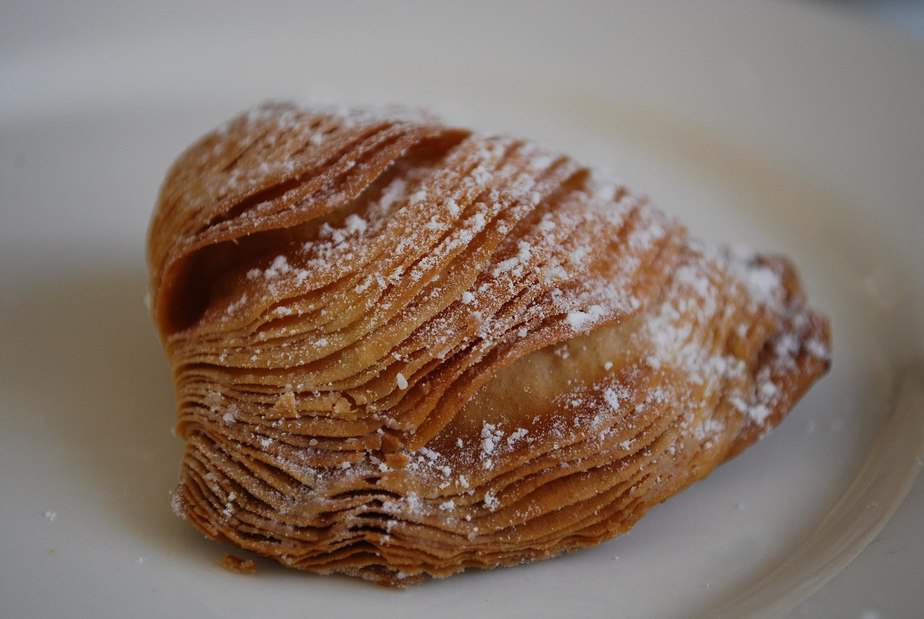 You won’t get away with not trying gelato while in Rome. This is a very important dessert to the land of Italy, and the people have been perfecting the art of this dish for centuries.

Gelato is a frozen dessert closely resembling ice cream, though don’t ever say this out loud. In Italy, gelato is gelato — and it’s superior to ice cream, containing less fat and sugar. 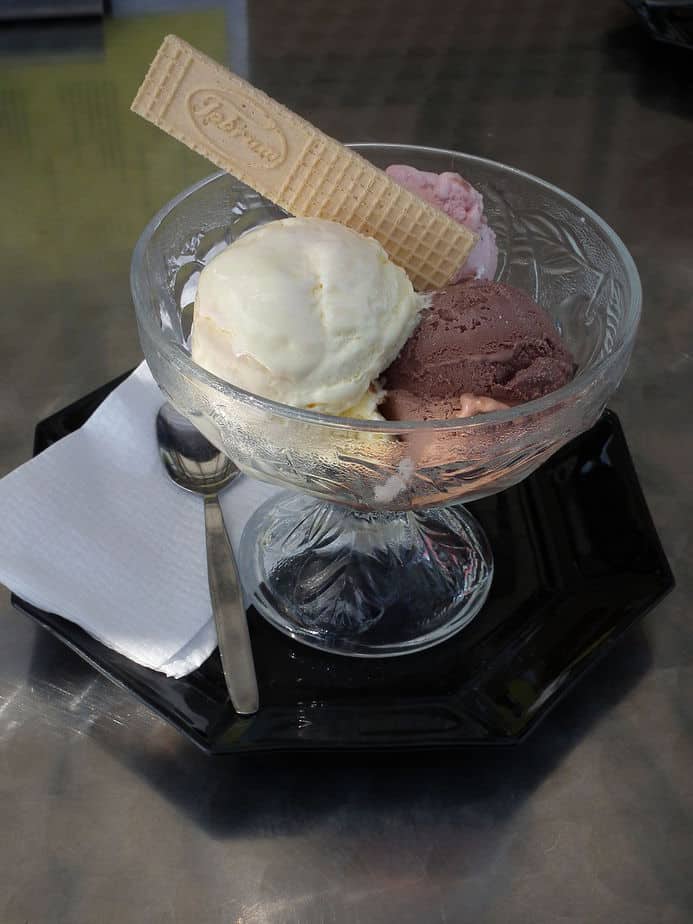 With the recent health movements turning people away from dairy and gluten, gelato makers around the world have had to find new ways of creating this dessert. In certain places in Rome, you’ll be able to eat both vegan and gluten-free gelato if needed.

Regardless of where you come from in the world, you’ve probably eaten a traditional Italian biscotti and not even realized it.

Oftentimes this dessert is served in miniature portions as a complimentary treat next to a coffee or cappuccino.

Biscotti is a twice-baked Italian biscuit containing a ton of almonds in every slice. The biscuits are incredibly crunchy and are eaten similarly to a rusk. Dipping the biscotti into a hot drink of sorts is how the Italians do it. 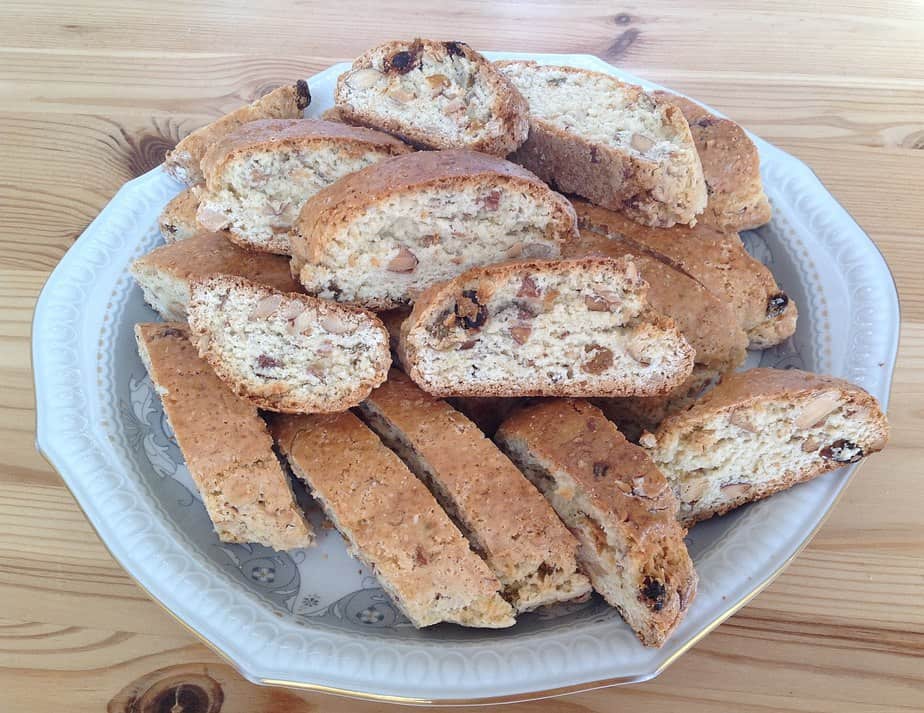 Cannoli’s originated on the island of Sicily. They were traditionally baked once annually for the Carnival celebration, but have since spiralled into a globally loved dessert all the way from Europe to the far west.

Cannolis are tube-shaped shells of pastry, deep-fried to hold their shape. Each shell is filled with a cream, usually made of ricotta cheese and a lot of sugar.

Bakers have begun experimenting with creative renditions of the cannoli. Some even have a layer of chocolate on the inner shell or chocolate chips in the filling cream. 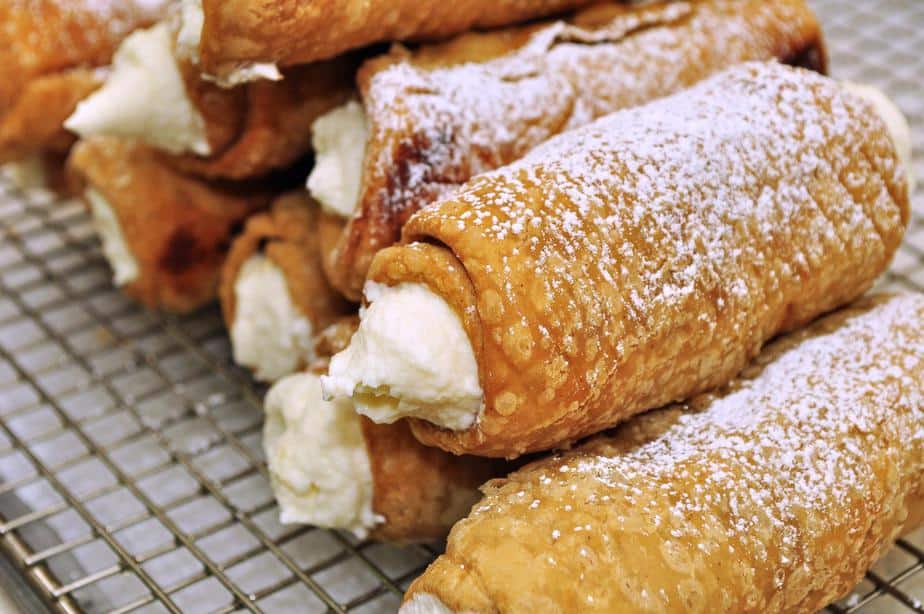 This Italian cake gets its hard-to-say name from its flakiness. Sbrisolona means “crumbly”, and that exactly what this nutty dessert does at every bite.

Traditionally made with hazelnuts, lard and cornflour, sbrisolona is served during Italian celebrations or at the end of a hearty feast. More and more people are opting to bake their sbrisolona with almonds instead of hazelnuts, which completely changes the experience (in a good way, of course). 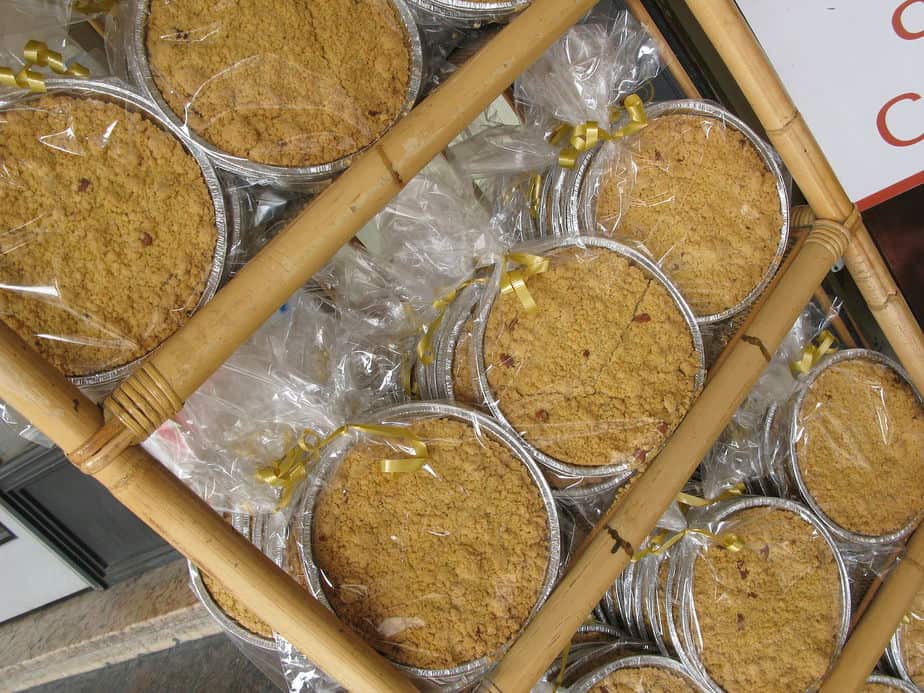 Panna cotta is a dessert found widely enjoyed around the world. It can be made in many different shapes and many different flavours, usually making use of a single fruit as the main component.

Panna cotta is a cream that is thickened with gelatin and set in a ramequin until it is able to hold its dome-like shape. Fruity panna cotta is always a crowd-pleaser, but traditional Italian cooking usually sticks to coffee and/or vanilla. 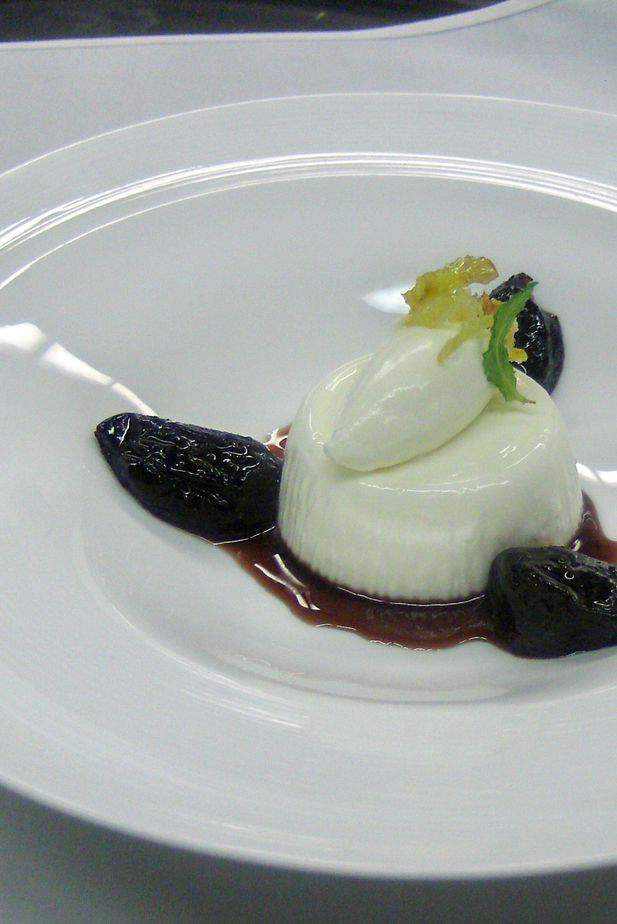 Panettone is another dish that you’ve likely eaten many a time even without having visited Italy.

It originated in Milan and was created as a type of sweet bread intended for consumption around Christmas and New Years. Italians consider it a bread, but most would identify it as a thick, fruity cake.

The key ingredients to a panettone are flour, candied fruits and raisins. 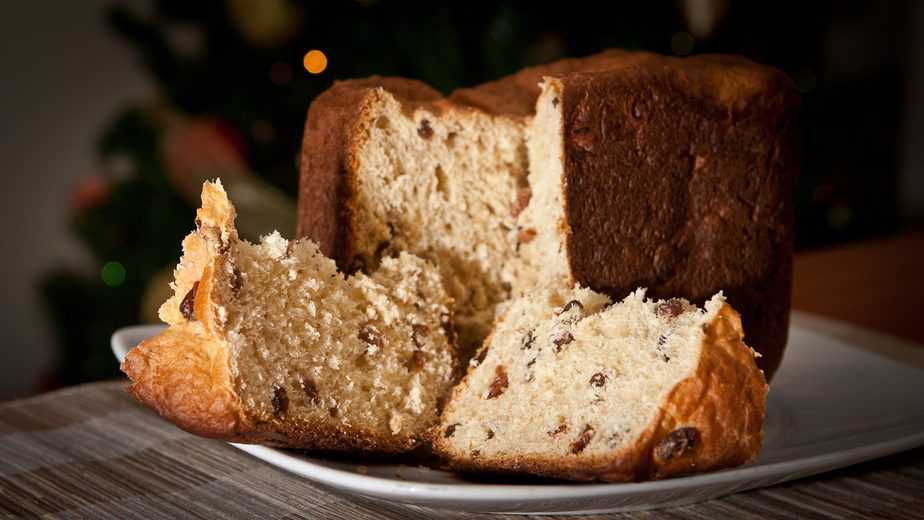 Panettone – by N i c o l a – Wikimedia Commons

Affogato is an Italian dessert that you might have made yourself accidentally while experimenting in the kitchen.

It’s a scoop of vanilla ice cream, or in Italy, it will always be gelato, that is drowned in a shot of freshly brewed espresso. 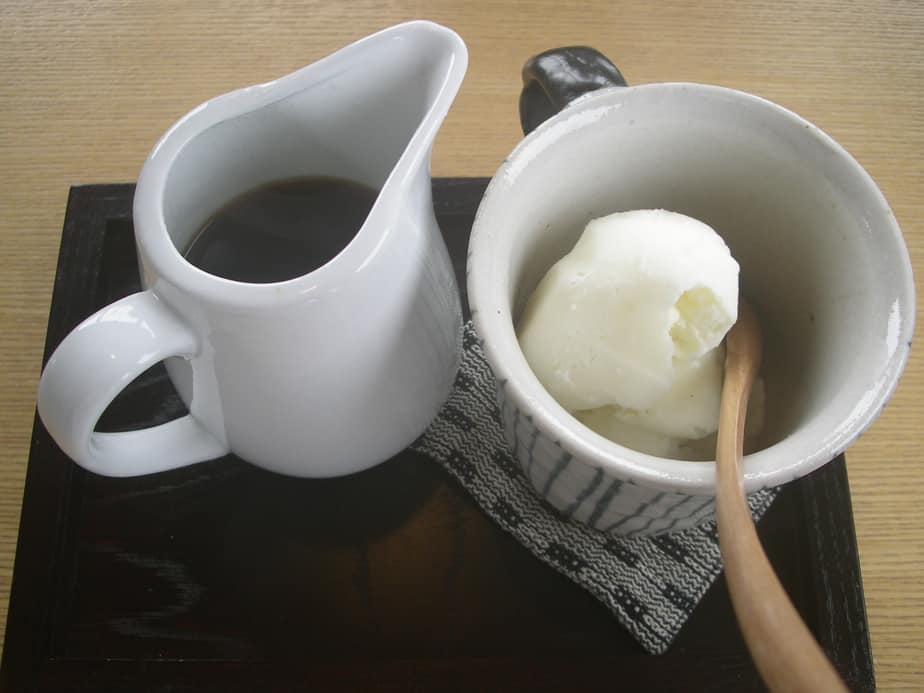 The hot coffee hits the cold dessert and combines it into a delicious, decadent treat. Some variants will include a shot of amaretto, Bicerin, or any other liqueur as an addition to the flavours.

Affagato is widely available throughout Italy but isn’t always put onto menus. If you want one, restaurants will generally make one for you upon request.

The Crostata is the Italian dessert par excellence. The traditional dessert that each Italian region personalizes with different jams and compotes.
According to some it is the oldest dessert made in Italy and dates back to the pre-Christian era.
In my opinion, on the other hand, it is the best dessert there is, especially when using the sour cherry jam typical of the Pontine areas and the villages of the Lepini Mountains.
The tart and its variations are celebrated on September 9 every year in Italy.

If you are in Rome I recommend you to visit the “Pasticceria di Zio” in Via Ginori 55.
Here you will find tarts that are the end of the world. Make room in your suitcase because he will want to take them home with you! 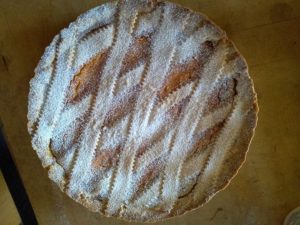 If you are in the surroundings of Naples, you cannot fail to taste the typical “pastiera”.
This dessert has ancient origins but according to some it was made by the nuns of San Gregorio Armeno.
Inside the cake, you will find expertly mixed: ricotta, milk, sugar, wheat grains, butter, candied fruit, eggs, vanilla, vanillin, orange and lemon peel, orange blossom water and cinnamon powder.
You cannot miss it absolutely! 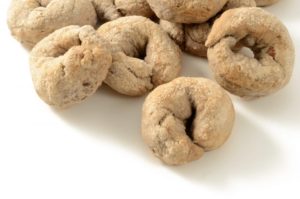 The “ciambelle al vino” are the tastiest desserts in central Italy.
They are the typical Lazio desserts par excellence and the Romans love to dip them in wine.
Alternatively, they can accompany a good coffee.
I am writing the recipe here so you can try to make them at home too!
You will need only these ingredients:

Mix the ingredients and let them rest for about 30 minutes. Form strips and give life to the “ciambelline”! Dirt them with sugar and bake at 175 degrees for 25 – 30 minutes 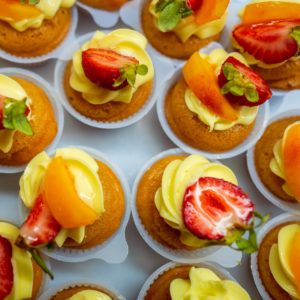 The Neapolitan Babà is my absolute favourite dessert.
It is a baked cake with leavened dough born in Poland, refined by the French and adopted by the Neapolitans.
The Babà is spongy and tasty as it is wet with rum sauce.
Many times it is cut in two and stuffed with cream and chocolate.
As they would say in Rome, “his death”.

Once in Naples, you can’t miss it! But you can find this lovely dessert in some roman pastry shops too! 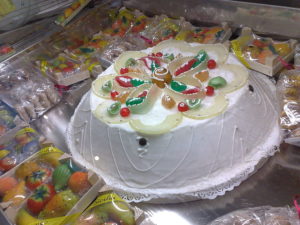 The Sicilian Cassata is a sweet made with sweetened ricotta. There are numerous variations of the dessert: the Catania version, the Trapani and the Syracusan version. There is plenty of choices, don’t you think? The baked version is still in vogue in the Palermo area. The recipe in question includes a shortcrust pastry wrap that contains the sweetened sheep ricotta cream and dark chocolate drops. The cake is baked in the oven at 200 degrees for half an hour and then sprinkled with powdered sugar.