Top 10 facts about the Trevi Fountain 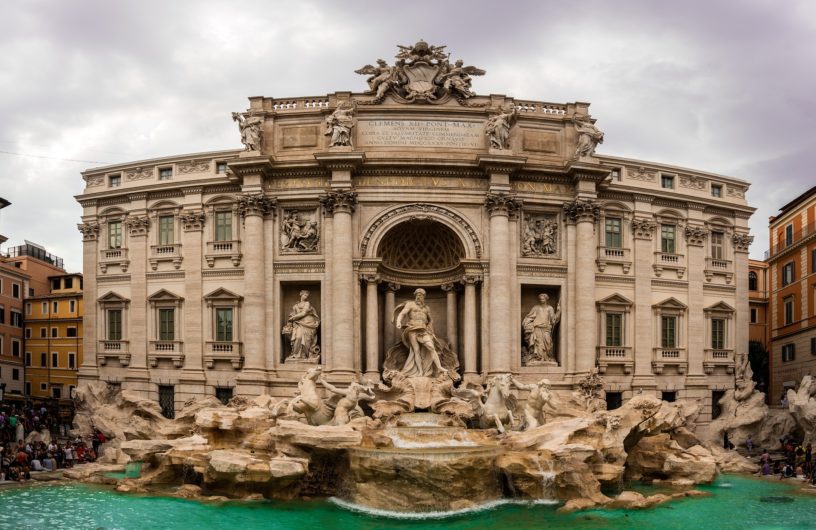 View of the entire fountain by Manufranco - Pixabay

Top 10 facts about the Trevi Fountain

Once you arrive in Rome, you absolutely cannot miss the Trevi Fountain.This fountain is one of the many symbols of the “eternal city”. Together with the Colosseum is the most visited part of Rome!

We can say that the Trevi Fountain it’s a roman landmark! and it is one of those places that you must see with your own eyes before leaving the city.

But there some things you must know before seeing it! Are you curious? Here you will find the top 10 facts about the Trevi Fountain in Rome!

1. Agrippa and his aqueduct

In 19 BC Rome was prospering under the leadership of Emperor Augustus Octavian. Agrippa, the son-in-law of the Emperor wanted to affirm his power. He ordered the construction of his thermal baths in the area known as Campo Marzio. Agrippa also commissioned the building of the Virgo aqueduct and also three huge collection tanks which remained in the Rione Trevi until the 15th century.

The Virgo aqueduct known in Roman times also as “Virgin Water” is still in working today. You can admire parts of the aqueduct that are not buried throughout Rome. To date, the aqueduct still feeds the Trevi Fountain.

2. The origins of the name Trevi 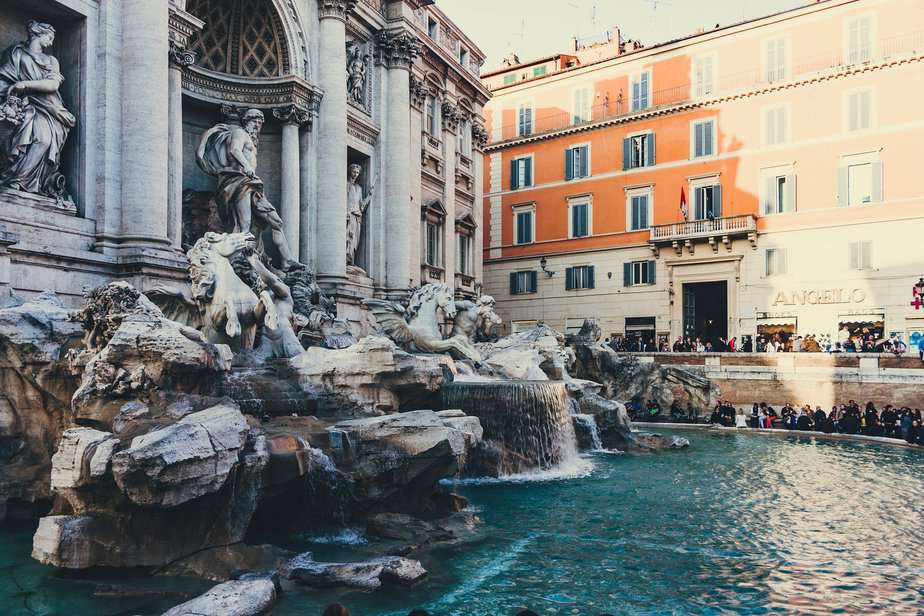 Probably the fountain got the name for its position. The fountain is located at the intersection of three important streets in the centre of Rome, at the termination point of the aqueduct.

For this reason, the fountain was called Trevi which in Italian indicates “three roads“.

But according to legend, the name Trevi derives from Roman mythology. In fact, Trivia was the name attributed to the divinity Diana or Artemìs, the deity of the hunt. 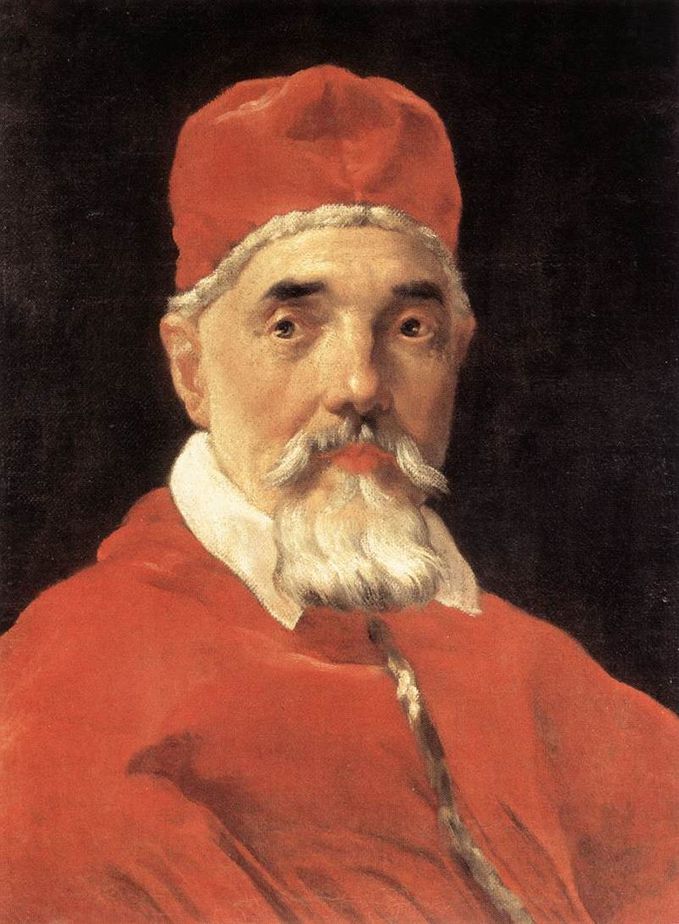 Pope Urban VIII had decided to renovate the square in front of the fountain. He realized that the fountain was too bare for his tastes and summoned Bernini.

Bernini carried out the project but nothing was done after the Pope’s death.

Some parts of his project were however added later. 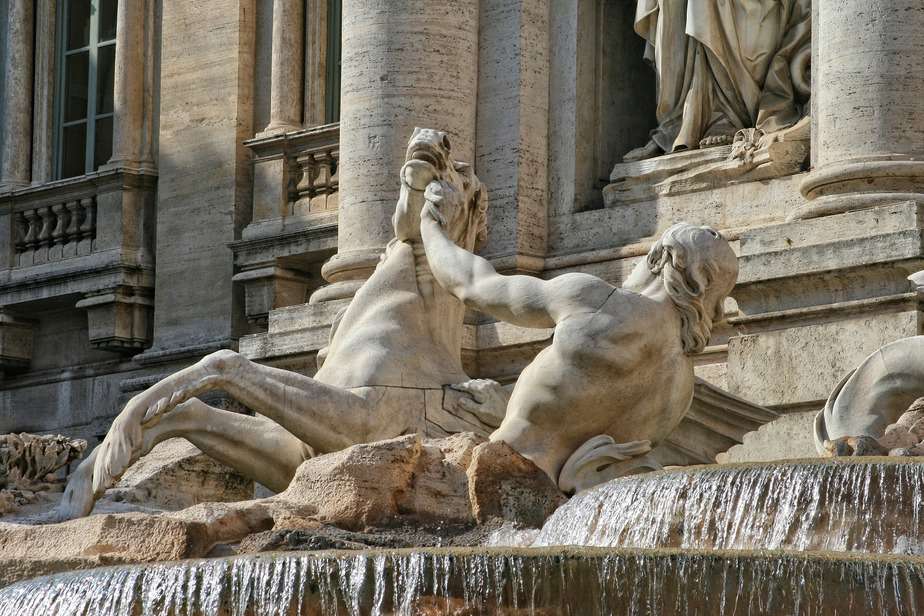 The fountain by DomiD – Pixabay

Hidden in the square you will find the beautiful Trevi fountain.

In 1732, Pope Clement XII requested the fountain to the architect Nicola Salvi.

The architect died in 1751, eleven years before the fountain was completely finished.

The architect in his final project included some parts previously designed by Bernini.

5. Description of the Fountain 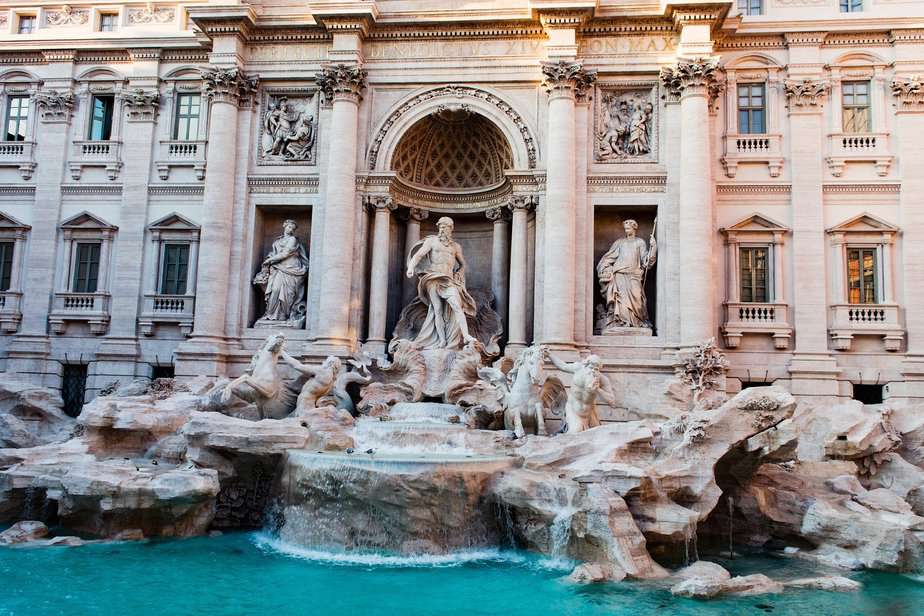 As you well know, the Trevi fountain has a single lateral basin and rests on the facade of Palazzo Poli.

The facade is entirely made in travertine. You will notice the presence of a complex of Carrara marble statues and a rocky cliff but also 4 Corinthian columns to delimit the sculptural group.  You will find two small niches on the sides and one large in the centre.

Inside the side niches, you will find the statues created by Filippo Dalla Valle.

These statues represent Health and Abundance.

If you look closely you will find some reliefs above the niches. One represents Agrippa and the second one the virgin who shows the source of the water to the soldiers.

At the centre of the niche, you can admire the sculptural complex representing the god of the sea Ocean.

The statue is 5.8 meters high; Ocean is represented above his shell-shaped chariot while he is pulled by two horses.

The horses have been named “rough” and “placid” and represent the states of the sea. 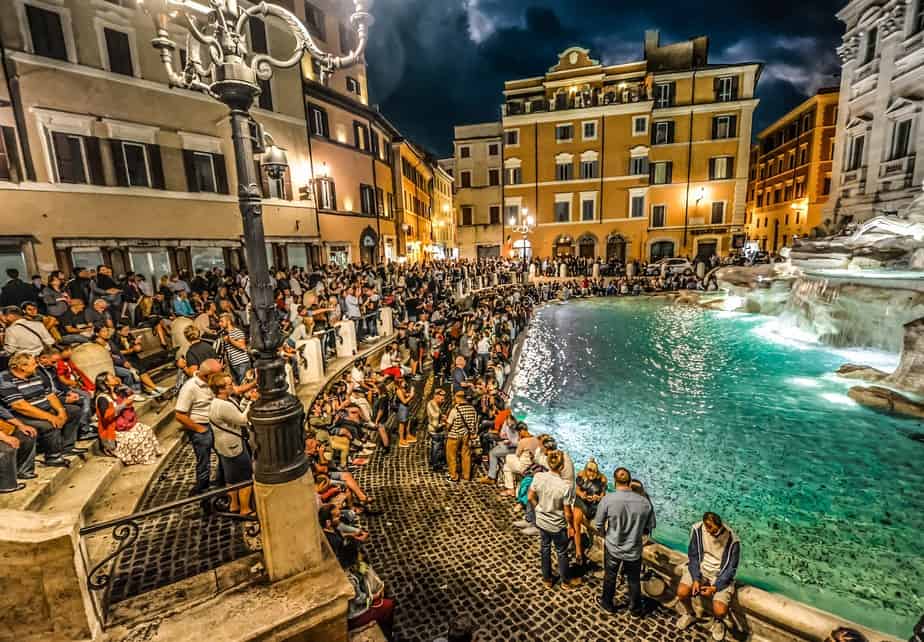 View of the fountain by Kirkandmimi-Pixabay

The fountain of Trevi was inaugurated at least three times:

1. Clement XII inaugurated the fountain in 1735, while the work was in progress. There were frequent quarrels between Salvi and the main sculptor Maini;

2. In 1744 after Salvi’s death, Benedict XVI inaugurated the fountain for the second time;

3. Clement XIII inaugurated the fountain with the sculptures of Pannini and Bracci (1762).

7. The rituals of the Trevi fountain 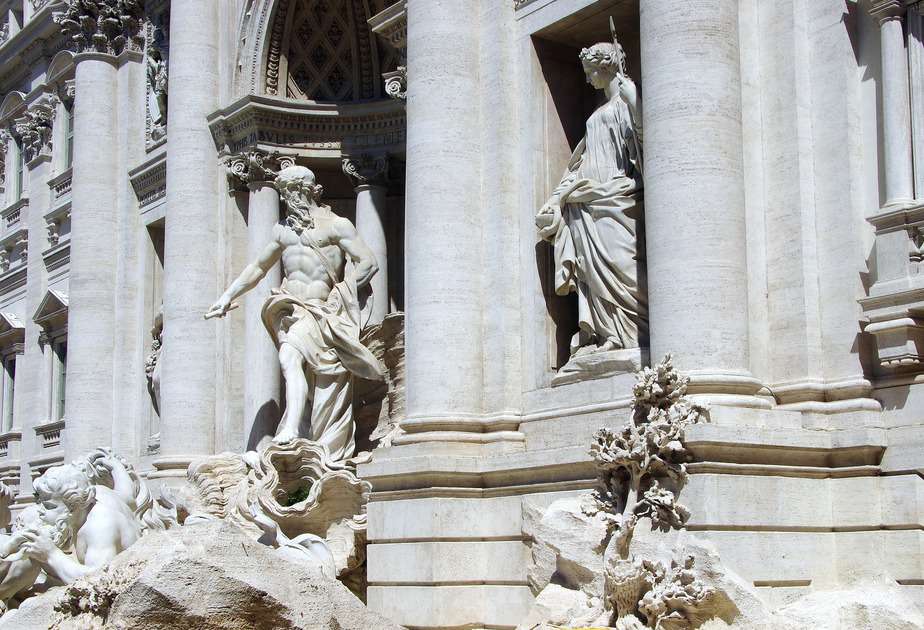 The Trevi Fountain by Dezalb – Pixabay

As many of you know, once arrived in front of the magnificent fountain you have to throw a coin inside it.

This ritual must take place giving your back to the fountain while holding your right hand on your left shoulder and with your eyes closed!

According to legend, in this way, you will ensure your return to Rome!

Another legend is well-known among the millions of travellers who visit it every day.

Once there you must throw three coins into the fountain. Each of which is equal to a wish:

You must know that once in a while a sub collects all the coins from the fountain. The municipality of Rome uses all the coins to help the homeless, and also women in difficulty but also many charity associations.

But there is more!

On the right of the monument, you will find the “ace of cups” and a small fountain known as “the fountain of lovers”. Legend has it that lovers must drink water from the same glass to remain faithful.

8. Various measures of the fountain 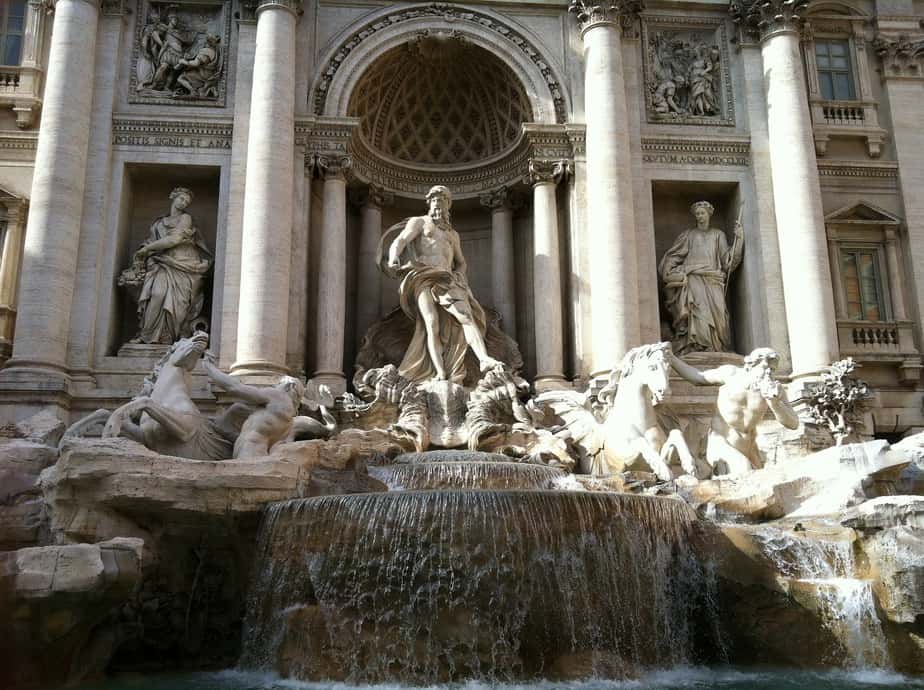 View of Oceano by AlexRoma – Pixabay

The Trevi fountain is the largest Baroque fountain in the whole “eternal city“. Its structure is 26 meters (86 feet) high and 49 meters (161 feet) wide. The fountain releases approximately 80,000 cubic meters of water every day. 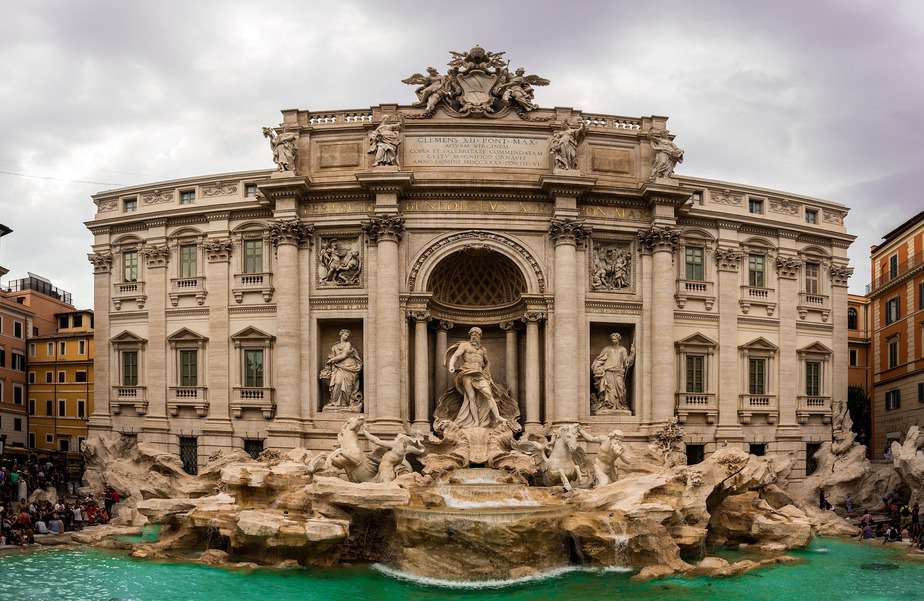 View of the entire fountain by Manufranco – Pixabay

The Trevi fountain was restored twice.

1. With the first restoration in 1998, the entire fountain was cleaned and the hydraulic system was repaired;

2. Later in 2014 with the modernization of the square a subsequent cleaning was carried out. Thanks to Fendi’s intervention, the tub and stucco were waterproofed.

10. The amphora that hides the fountain 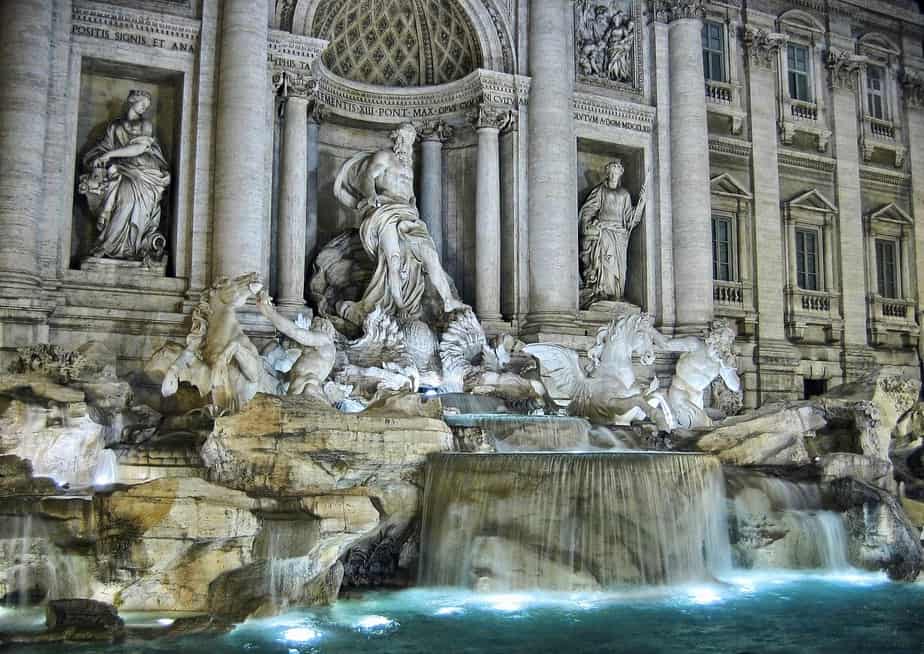 The fountain by Czu_Czu_Pl – Pixabay

A Roman merchant who had a pharmacy near the fountain was not very happy with the work in progress of the fountain.

For this reason, Salvi decided to place a large travertine amphora to cover his view.

Just in the corner with Via Stemperia you will find the huge amphora also known as “Asso di Coppe“.