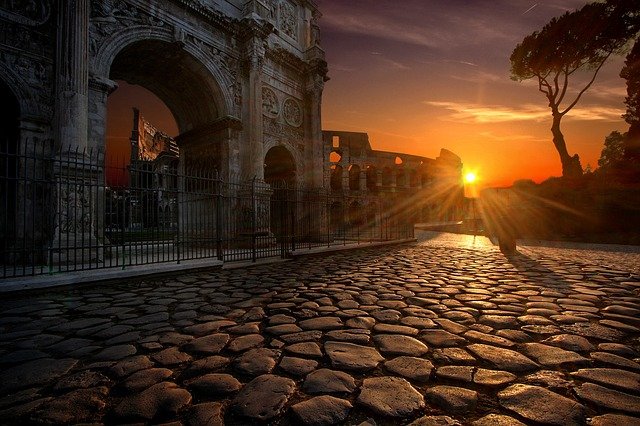 Are you passionate about travel and ancient history?
Once you arrive in Rome you will definitely want to see the Colosseum.
As you know, is a spectacular amphitheatre that could accommodate up to 50,000 spectators.
In this place, many gladiators fought to entertain the population. But also to entertain the “i patrizi” of ancient Rome.
I’m sure you have seen the movie “Gladiator” with Russell Crowe and Joaquin Phoenix to learn more.
But if you want and need to know more about gladiators read on here.
You will find the top 10 facts about Gladiators in Ancient Rome!

1. Origins of the fights 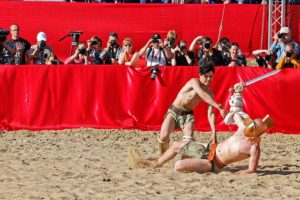 According to historians, the fighting originated in the ancient Etruscan period.
Instead, according to others, the fights between gladiators started as blood rites.
These blood rites were usually staged during the funerals of some wealthy nobles.
And were often held on the graves to represent the virtues of the dead.
They became real “funeral games” and grew popular in the 1st century BC with Julius Caesar.
Caesar made a hundred gladiators fight in memory of his father and his deceased daughter.

According to some historians, gladiators were slaves bought and trained to fight.
Most often they were murderers or people who had committed various crimes.
But according to other historians, this has not always been the situation.
Many people attracted by the money, glory and “spotlight” became real “freelance gladiators”.
They devoted themselves to the “gladiatorial cause”.

3. Fights between gladiators and animals 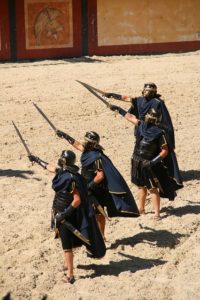 According to scholars, many fights also took place with animals.
Animals that the Romans considered “exotic and dangerous” such as lions and tigers.
But according to other authorities, fights between gladiators and animals were rare.
Often the “venatores” during the “bestiarii” were usually reserved only for specialized gladiators. 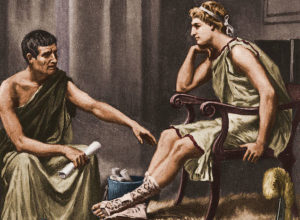 It wasn’t just the men who took care of the fighting. Women who were usually enslaved were also sent to fight in the arena.
There were no half measures even if they were often frowned upon.
There were some that specialized in fighting and became very famous.
We have traces about it in Suetonius’s “Lives of the Caesars”. The emperor Domitian had offered nocturnal shows with gladiators.
The expected fights were between men and women but also with the dwarves. 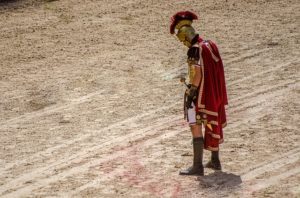 Very often the winning gladiators became famous and known wherever they fought.
The population ran to watch their fights. And for a moment they forgot about the lack of food and health problems.
According to some mosaics of Pompeii, gladiators were very popular among women. They were usually depicted catching women along the way with a net.
According to some scholars, women believed their sweat was aphrodisiac. 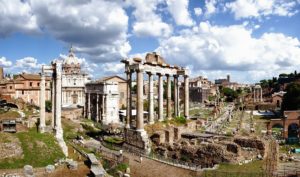 The Roman Forum By Bert Kaufmann-Wikimedia

Even the emperors and “patricians” fought to ensure the favour of the population. With the aim of becoming famous and followed by everyone, they became gladiators for a day.
The most famous fighters were Caligula, Hadrianus and Titus.
Emperor Commodus instead killed bears and other dangerous animals.
And once they were brutally killed he loved to collect a sum of money as price.
Stuff for emperors right? 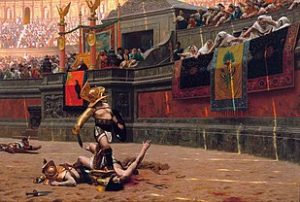 Movies and TV series have shown us how gladiators were often exploited to death.
Oftentimes this was not the case. Because they were an investment for their trainers. The most famous and the strongest allowed them to earn huge sums of money. for this reason they avoided making them fight all the time.
Some fights, lasted so long that in the end, they opted for a draw.
Many times it all depended on the vote of the population with their thumbs.
Usually, their life was not very long but it depended on experience or being famous. 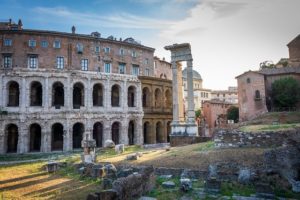 The gladiators differed according to their role and costume.
The most famous and well-known were: 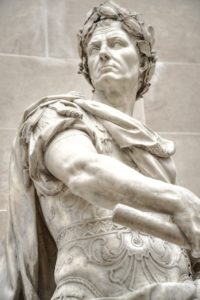 Gladiators were often divided into categories based on their skills and level.
The experience was a must and victories and defeats were usually taken into account.
They were always classified according to their armour and their fighting styles.
Usually, the “trace” fought with the “mirmillone” or with a “reziario” and so on.
The most famous and well-known gladiators were also sent out of Rome.
They often fought in the other arenas located along  Italy.
Such as for example the arena of Pompeii or Naples but also in the areas near Verona. 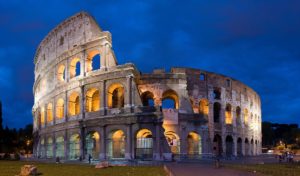 Very often the gladiators could win their freedom.
They were slaves bought by “entrepreneurs” of the time who obviously wanted their money back.
To win freedom they had to make their owner earn money, make him rich.
They had to free their freedom. Once free they wore the “pileus” a white wool cap.