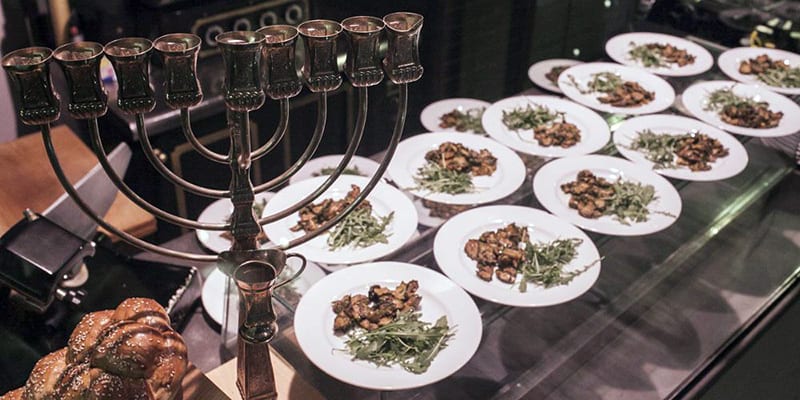 The "Mishmarà" celebration at BellaCarne restaurant in Rome, image provided by the restaurant

The “Mishmarà” celebration at BellaCarne restaurant in Rome, image provided by the restaurant

For most visitors in Rome, the cuisine in the city is just… the one. Carbonara or pizza, saltimbocca or tiramisù: these recipes are associated with Italy, and are definitely staple dishes that you cannot miss, but there is more to Italian cuisine than meets the tourist’s eye.

Before becoming the capital of Italy, Rome had been the Papal city, ruled by odd traditions and cruel laws that also covered food and the way it had to be consumed.

Tourists sometimes also overlook the fact that some of the “staple” recipes  in Roman cuisine, actually come from somewhere else entirely. For example amatriciana comes from the small town of Amatrice, just as arrosticini are from Abruzzo and most risotto dishes originated in the north of the country and slowly made their way down south.

On top of that, many of the delicacies you can eat today in Rome are the result of hundreds of years of oppression, which have survived throughout a history dating back to the origins of the Eternal City itself.

A singular community in the heart of Rome 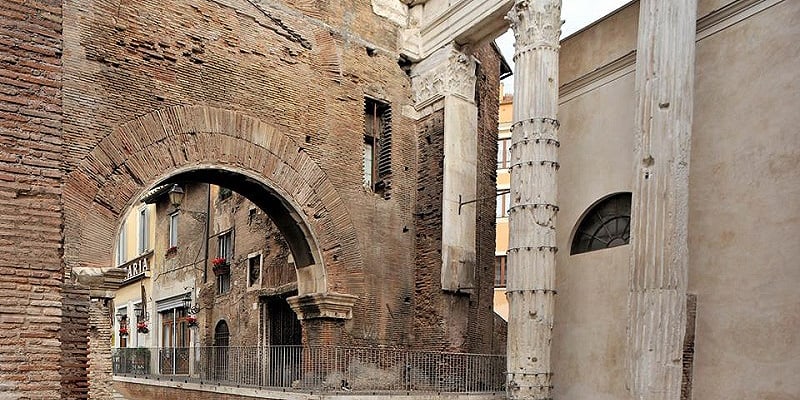 A glimpse of the Jewish Ghetto from the Porticus of Octavia, image by SovrintendenzaRoma.it

Enter the Jewish-Roman community, the single oldest one in the whole of Europe, having been in Rome continuously since the 2nd century BCE. Oversimplifying for the sake of brevity, the first Jewish people to have settled in Rome had a complex status – they were not persecuted for their faith or their origin, at least initially.

Their standing in relation to the “state” only got worse after Christianity became the official religion of the Roman Empire, and their civil rights were incrementally stripped away before and after the establishment of the Jewish Ghetto.

You will be familiar with this area well if you visited Rome already, but even if you haven’t, you will probably be aware of the fact that it’s lodged between the river, opposite Trastevere, and the base of the Capitoline Hill, where the Capitoline Museums are located.

Today it is one of the most exclusive boroughs of the city, with apartments being sold at some of the highest prices in the market, but it wasn’t always like this.

Smelly, because of the ancient fish market that was in the same location, unsanitary (for the lack of sewage and fresh water) and dangerous because of the frequent floods from the river Tiber: a proper ghetto.

Starting 1555, the Jewish community was forced to live in a walled area here: the walls are not there anymore but you can see traces of it walking around the district. They were in a prison of sorts, with specific and absurd rules they had to obey.

People were banned to walk outside the Ghetto after dark, and forced to attend compulsory sermons or Holy Masses in order to convert to Christianity. On top of the kasherut dictating what foods could be eaten, in 1661 the inhabitants of the Ghetto were mandated from eating certain types of food, or bigger than a given size. And that’s how the Jewish-Roman cuisine was born!

A unique way of cooking, in spite of the Pope’s rules

Jewish-Roman cuisine can be considered as one of the two cores of Roman cuisine at large, but although ancient traditional recipes from the Roman Empire have been heavily adapted or have disappeared altogether, the Ghetto was abolished permanently only in 1888. Therefore, Jewish-Roman recipes have been passed down to our generation untouched, and they can be tasted to this day in the large majority of the city’s restaurants.

Indeed, while there are many Jewish restaurants in the Ghetto to this day, the community has scattered throughout the city and, more importantly, its traditional recipes have spread beyond the confines of the Ghetto itself thanks to their uniqueness, and their use of absolutely local & cheap ingredients: you can now taste some of these delicacies even in other cities of Italy.

Their success is a consequence of being available to absolutely everyone, with preparations that are quick and fairly easy to reproduce.

What follows is a list of 5 essential Jewish-Roman recipes that are born out of the local community: you can find them in most restaurants offering traditional Roman cuisine or in the eateries that are found in the Jewish Ghetto itself. Or you can try making these recipes at home: they’re so simple they’re fool-proof.

Just the one heads-up before I leave you to it: if you mean to taste them where they were originally conceived, know that Jewish-owned restaurants in the area will never be open on Saturdays, so plan your visit accordingly!

The most famous Jewish dish in Rome 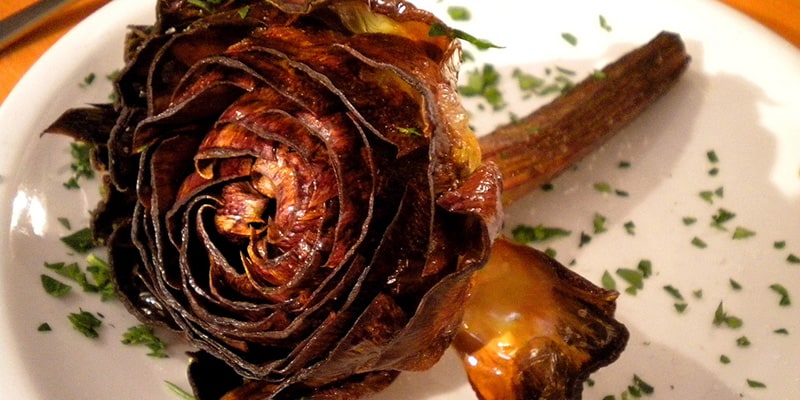 The deep fried artichoke is a symbol of the Jewish-Roman cuisine, image by Signor DeFazio, uploaded from Wikimedia Commons

A recipe as vegan and straightforward as can be, which is usually served as an appetizer when artichokes are in season (around December and again in the spring).

Remove the harder external leaves of the artichoke and trim its stem, then plunge it head down into a pot of boiling olive oil until crispy. Season with salt and pepper to taste.

Olive oil was essential to the Jewish community of Rome – in the olden days only lard was used to fry in the city, but that was obviously forbidden in the Ghetto, because it wasn’t kosher!

A classic born from scraps 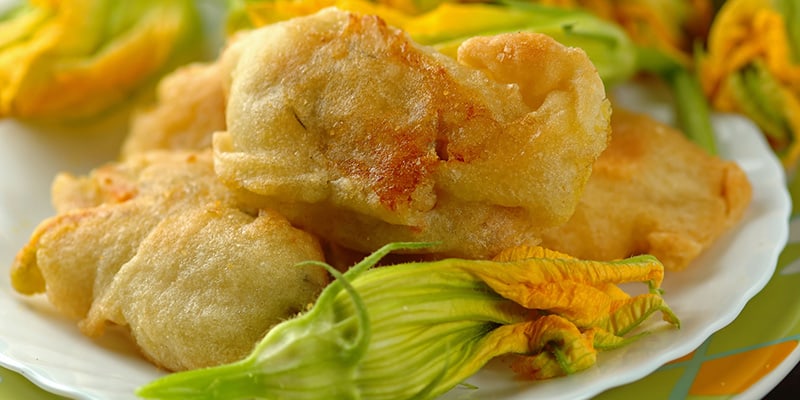 Deep fried zucchini or pumpkin flowers are available at most restaurants in Rome, image uploaded by Mangiarebuono.it

Navigating around the kasherut and the food bans by the Popes was hard, so Jewish cooks started making do with what was left unused by the general population.

Pumpkin flowers were one of those leftovers that the genius ladies from the Ghetto started to stuff with cheese (mozzarella, once it became widely available) and anchovies (one of the few fish they were allowed to eat).

Again, this is a starter, and one that is extremely popular and widely available, even outside of Rome. Several versions are available where you can find it with just ricotta or just mozzarella, no anchovies involved: perfect for vegetarians visiting Italy! 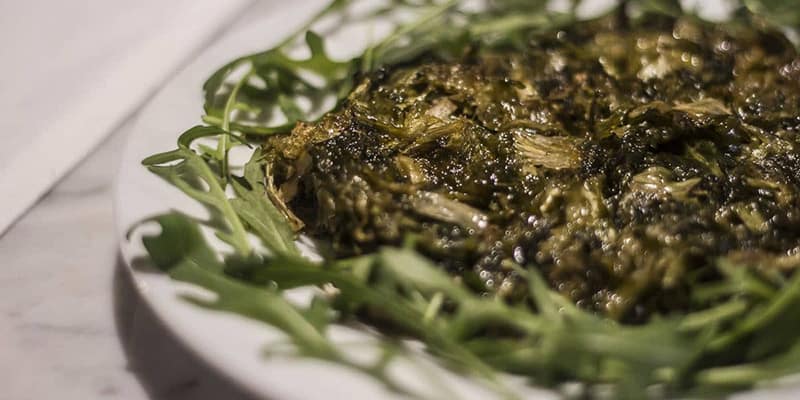 The “aliciotti con l’indivia” as served by Bella Carne, image uploaded by the restaurant

Anchovies make another appearance in what is basically a cheese-less “endives lasagna”, where alternating layers of fish and endives are baked in the oven, sprinkled in olive oil, with salt, pepper and garlic to taste. Some people do add chili flakes to it.

Not your average courgette 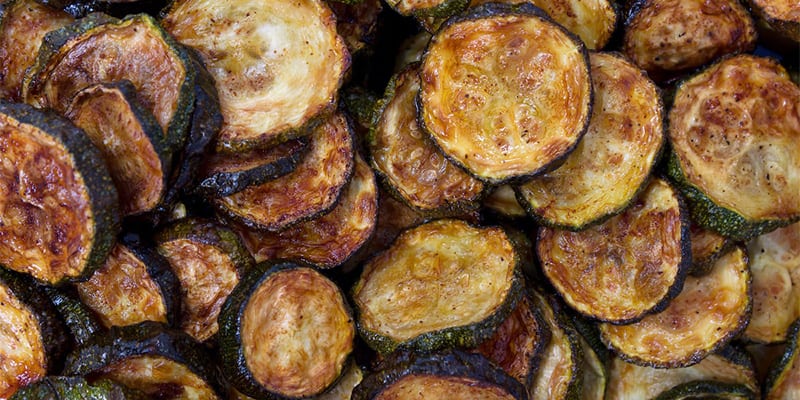 The deep-fried zucchini before being dipped into vinegar, image courtesy of ProgettoDreyfus.com

Another quintessential Jewish recipe, and yet another vegan one: in a place so small and so overcrowded (4,000 people lived at one point in the Ghetto), it wasn’t easy to have access to meat.

This starter or side dish is not to be confused with marinated zucchini, even though the differences are almost non-existent: zucchini are thinly sliced and deep-fried, and are then seasoned with salt and pepper to taste. The excess oil is patted away, at which point the deep-fried zucchini are left to marinate in vinegar for at least 24 hours after having been sprinkled with leaves of mint and basil and chopped garlic. 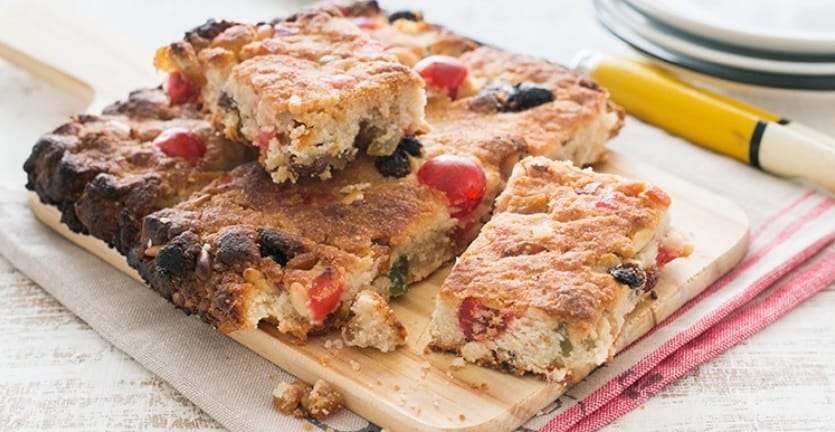 This is not the type of pizza you’re probably expecting to eat in Rome. In fact, this is a sweet type of bread/cake served only in a handful of places in the city. This is not the only twist on the well-known traditional recipe: “Beridde” might be a contraction of “Brit Milah”, as in the ceremony where newborns were circumcised in the Jewish community – the story goes that this cake was “invented” as something to offer the night before the circumcision took place.

We might never get to know the real origin of this particular cake: suffice to say that it is delicious! It consists of two equal parts of regular flour and almond flour mixed together with candied citrus, candied cherry, candied orange, raisins, pine nuts and almonds, with the whole mix then baked in an oven.

Be prepared for long queues outside the bakery that sells it in the Jewish Ghetto of Rome: its popularity has crossed over and now hundreds of people go buy it, coming from every area of the city (and beyond).