Famous Movies That Were Filmed in Rome 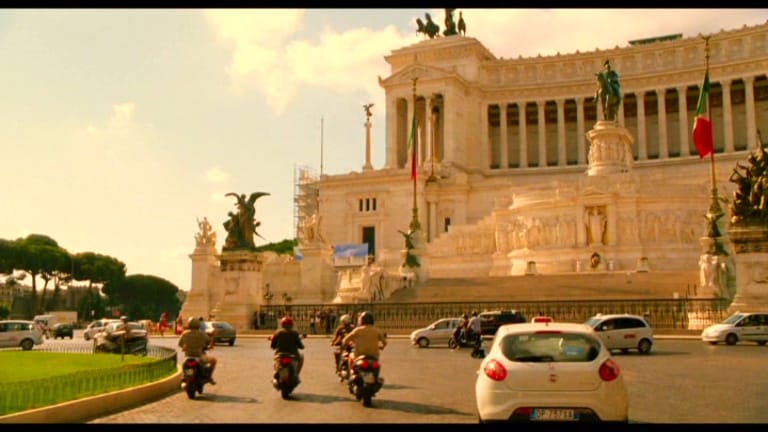 Still from To Rome With Love

Famous Movies That Were Filmed in Rome

I’m sure you don’t need any more convincing that a trip to Rome should be on your bucket list. Even so, reminding yourself why this city is so appealing even to the least romantic of us all, is never a bad idea.

The cinema is where I find true confirmation of my love for the Italian capital. There truly is nowhere like it, and the following few films give a glimpse of the energy that flows through these streets. Read on!

If you’re a 90s baby then you without a doubt got your first taste of Rome through the beloved Miss Lizzie McGuire when her debut film arrived in the early 2000s.

This was the first full length movie based off of the hit TV series, and in it she traveled to Rome of all places! The story takes place as our girl travels to Italy as part of a school trip. She meets the famous Paolo, an Italian pop-sensation, who takes her on a whirlwind adventure through the Roman streets on the back of his Vespa.

This movie is a light hearted glimpse at some of the most important landmarks Rome has to offer, including the Trevi Fountain, the Colosseum and the city’s luxury shopping districts. It’s like a guided walking tour, but on screen!

Another film that absolutely shook anyone who was coming of age when the 2000s drew to a close. Eat Pray Love was originally (and still is) an important book by Elizabeth Gilbert, published in 2006.

The success of it moved movie producers to turn it into a film, featuring none other than Julia Roberts in the main role.

For those unfamiliar with the plot; the book and film follow one woman’s journey to find inner peace and fulfillment. She takes three trips: one to eat, one to pray and one to love.

This representation of the city is approached from a beautiful, self loving angle in which one can see the true charm that Rome bestows on every single individual who gives it the chance.

A lot of filming was done in the Trastevere area; a hot-spot for dining and nightlife. The famous Spanish Steps also feature quite prominently in the movie.

To Rome With Love

To Rome With Love was one of the most satisfying, and honest, representations of Rome to ever be put on screen in my opinion.

The film has for storylines, instead of just one, and follows four separate tales around the city showing different individuals having very different experiences. One being a tourist who falls in love; the next, newlyweds who intend to relocate to the eternal city; the third, a glimpse at the life of a working class, local Roman family and the mundane existence that they feel; and finally, a family visiting Rome having done so in the past as well, revisiting places they’ve seen before.

It’s a beautiful account of the many different existences happening in this city at any given time. You’ll also be shown a bunch of important sites along the way. Woody Allen is a known lover of the Trastevere, so a lot of time was spent here. Penelope Cruz is filmed wandering through the Villa Borghese.

Nine is one of my favorite films ever made; a significant portion of it is set in Rome.

The film is set in 1965 and follows the story of a man named Guido Contini who is, in the movie, the most renowned and successful director in all of Rome. He is revered by the people, and since it’s been years since his last creation they are pressuring him for work.

Contini, deep in writers block and unable to handle the pressure, flees to the coast and embarks on a surrealistic journey in which he summons all of the inspirational women from his past who helped shape him into who he is today.

The characters are phenomenal; from Sofia Loren starring as his mother, to Fergie as his childhood prostitute; Marion Cotillard as his current wife, Penelope Cruz his mistress, Nicole Kidman his muse, Dame Judi Dench his longstanding costume designer, and Kate Hudson as the reporter who ties his worlds together.

An absolute cinematic dream, Nine is.

The Talented Mr. Ripley is another fabulous movie, with a few notable scenes shot in Rome.

It’s a thriller, and the story takes place across Italy, as Matt Damon’s character wanders the country during the 1950s. He is entrusted by a wealthy American tycoon with the task of going to Italy and convening his son to come home with him.

Things take a turn as Damon starts to become infatuated with the lifestyle that this man, Dickie, leads out here in this foreign land. Without giving too much away, you’ll be taken on a seemingly very light ride that turns dark before you have a chance to comprehend what is happening. It’s wonderfully exciting and beautiful display of Italian landscapes all at once!

Amongst the few scenes set in Rome you’ll see the Roman Forum, the Spanish Steps and a few different piazzas that are today meeting points for guided walking tours around the city.

This film is almost two and a half hours long and not something to be watched in pieces. Set aside ample time to enjoy it properly!