10 Best Books to Learn about the History of Rome 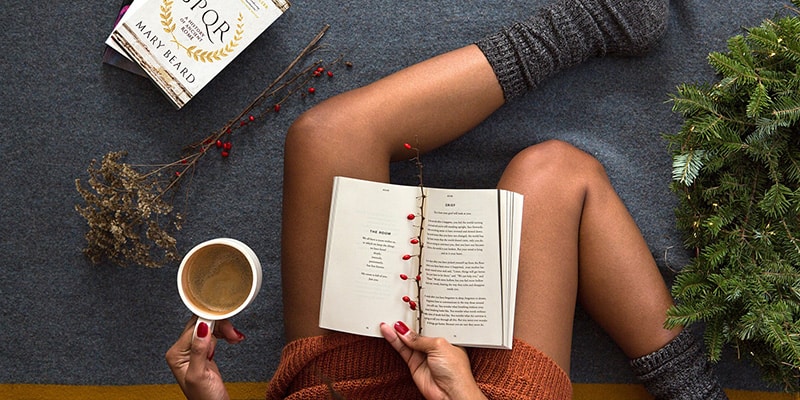 A classic way to learn more about Rome as you plan your travel, image by ThoughtCatalog & tweaked by the author sourced from Pixabay

10 Best Books to Learn about the History of Rome

A classic way to learn more about Rome as you plan your travel, image by ThoughtCatalog & tweaked by the author sourced from Pixabay

If you’re anything like me, when travel approaches it’s not guide books that you are after – you want advice from locals, something unmediated by authors and publishing houses, as well as actual books. Novels, essays, history texts – non-fiction or fiction, they don’t matter as long as they are well researched and help learning about a city’s history. 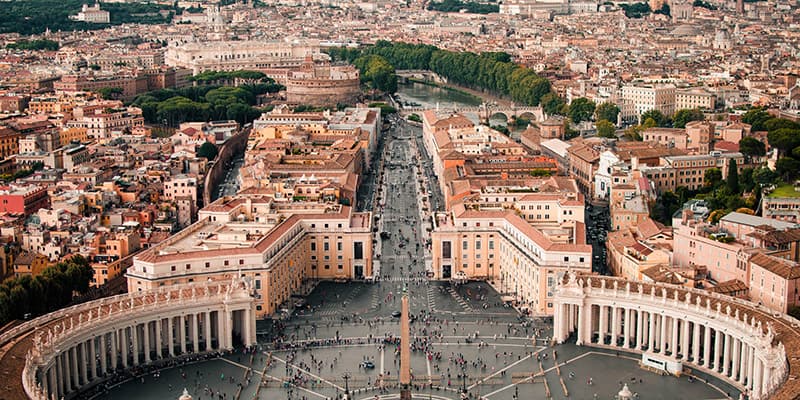 In this picture you can see, quite literally, several centuries of history at once! Image by Caleb Miller sourced from Unsplash

When it comes to Rome, there is a twofold problem that arises. Rome has two faces: on one side there is one of the cradles of civilization, with its unquestionable importance on the rest of the world. There are so many interesting tomes about the city’s impressive legacy it’s embarrassing. How can one choose the best books to learn about it?

On the other side, conversely, you’ve got a modern metropolis with tons of contradictions, of seemingly absurd ideas and people and places converging and painting a picture that is complicated and overwhelming, but immensely fascinating. Again, there are so many books about this side of the city, but tourists are seldom interested in that, and would rather know about emperors, popes and their extravagant lives and times.

In making this list, I tried to combine Rome’s different roles throughout history, picking authors and works that succeeded in capturing the uniqueness of the city or the singular factors that brought it on top of the world, quite literally!

1. A History of Ancient Rome by Mary Beard – a masterpiece for Rome “newbies”

Professor Mary Beard is one of the greatest experts, if not the top one, in all things ancient Rome. Her TV shows on the Empire are compelling, funny and packed with tons of information that is nowhere near what I learned in school. Her conferences are enlightening.

And this book… Well, this book is the condensed version of her lessons and programs, and is a must-read! I go back to it time and time again when I want to have a deeper understanding of certain figures in the Roman world, or the facts that maketh Rome.

2. Rome: A History in Seven Sackings by Matthew Kneale – how the “barbarians” changed Rome over and over again 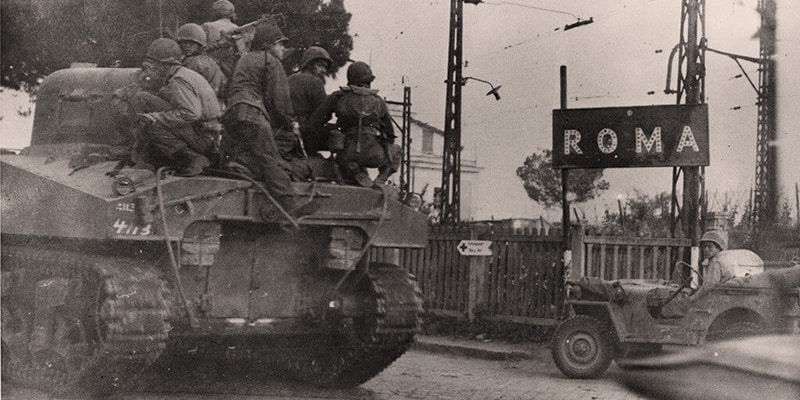 The 13th Armored Regiment enters Rome in 1944. WWII is featured in Matthew Kneale’s book. Image in the public domain

Let’s go deeper into history with this small but heavy book that can help you learn why Rome looks the way it does, at least for the most part, to anyone coming for a first visit (and many of those doing a repeat trip).

A staggering amount of travelers are, in fact, unaware of just how many times Rome was pillaged and destroyed, and the attacks it suffered inform the way the city looks now, while also influencing its language, its customs, even the appearance of its inhabitants!

3. Escape from Rome by Walter Scheidel – the story of one of the greatest disasters of history

Considered one of the best recent books on Rome, this tome focuses on the fall of the Roman empire rather than its heyday. The tribulations rather than the triumphs. However, Walter Scheidel’s acute observations are not simply lamentations. He boldly claims (and we can all agree, don’t you think?) that the fall of the empire was what put in motion those gears that ultimately created Europe.

Walter Scheidel – Escape from Rome: The Failure of Empire and the Road to Prosperity (2019)

4. My Kitchen in Rome by Rachel Roddy – begin with this to learn about Rome’s food and charm 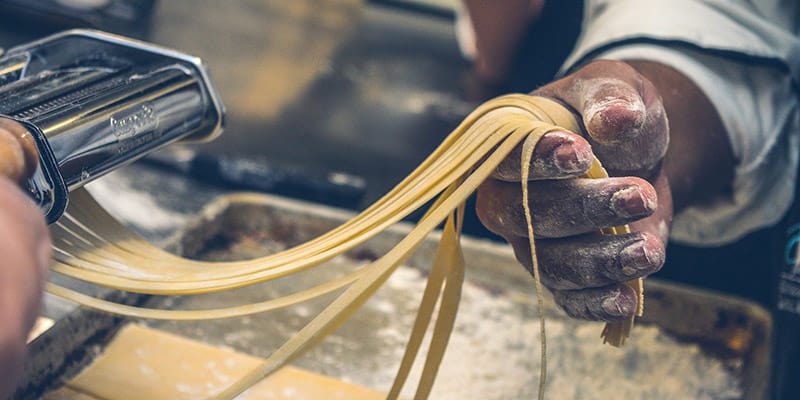 What does a recipe book have to do with the history of Rome? Just about everything!

Ms. Roddy is one of The Guardian’s food writers, and one with a special place in the world – she has been living in Rome for 15 years or so. This book is obviously a collection of recipes, but it’s what the author has gotten to learn while staying here, at the same time learning how to navigate her new hometown, its language, its customs and, finally, its people.

Ditch your copy of “Eat, Pray, Love” and go for the real thing: this is ultimately the story of an expat who made it, and with the added value of authentic food on every page!

Rachel Roddy – My Kitchen in Rome: Recipes and Notes on Italian Cooking (2015)

5. The Italians by John Hooper – a look at modern Romans (and Italians in general)

“How did a nation that spawned the Renaissance also produce the Mafia?” is one of the questions that John Hooper asks himself – and its readers – in this delightful observation of Italians.

Having worked and lived in Rome for a number of years, Mr. Hooper bases its eye-opening thoughts on little known historical facts, news items or even personal experiences.

Make sure you read, especially, how Mussolini tricked Hitler into believing that Rome was a much more modern city than it really was: it’s the stuff of movies (only, it really happened!).

6. Clash of Civilizations Over an Elevator in Piazza Vittorio by Amara Lakhous – the life and times of migrants in Rome

If you stick to the central areas of Rome when you visit, of course you will be surrounded in history and magnificent buildings, but you may never get to experience what the city is really like currently.

But move to the suburbs and you may end up in a scenario that is very similar to the premise of this novel – mixed communities, each bringing to the metaphorical table a different culture, language and way of living. Sans the murder that shakes these characters, that is.

This novel was really the first to address the transformed social texture of a city like Rome. Make no mistake, though – even ancient Romans came from places as diverse and far away as Greece, Spain, Egypt, the Middle East or Great Britain.

7. Absolute Monarchs by John Julius Norwich – all about the Popes who ruled Rome

Italians have “Vite efferate di Papi” (loosely translatable as “The nefarious lives of Popes”) by Dino Baldi, whereas English-speaking readers have this must-keep-close book on the same subject: in it, Mr. Norwich has patiently and painstakingly researched the pontiffs of Rome and tells the story of the most significant ones in history, complete with their shortcomings and hideous crimes (for a sneak preview, go here!).

Sex addicts, tyrants and even a woman dressed in men’s clothes all make an appearance in this entertaining book.

John Julius Norwich – Absolute Monarchs – A History of the Papacy (2011)

8. Memoirs of Hadrian by Marguerite Yourcenar – the life and times of emperor Hadrian 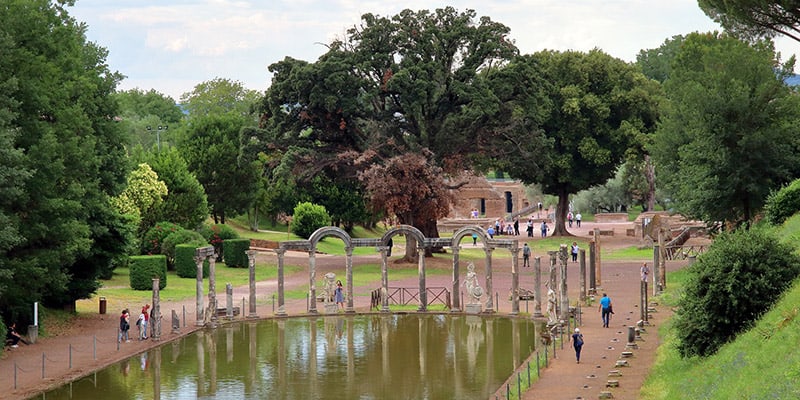 According to Marguerite Yourcenar, part of the novel is set in Villa Adriana, emperor Hadrian’s grand mansion in Tivoli. Image by Emphyrio sourced from Pixabay

Part biography, part novel, part philosophical essay: this celebrated book is a glimpse into the life of Roman emperor Hadrian, the very same one who was buried in what is known today as Castel Sant’Angelo, by the Vatican.

The book is structured as a long letter written by the dying emperor to his nephew Marcus Aurelius (he himself would take power, as you surely know!) and it’s a poetic, bittersweet and dense retelling of Hadrian’s triumphs and regrets, including his love story with Antinous.

When Ms. Yourcenar wrote the book, she researched thoroughly Rome’s history as it was known at the time, and it remains a fundamental read on the city and its politics, as it mixes facts and fiction in a unique way. 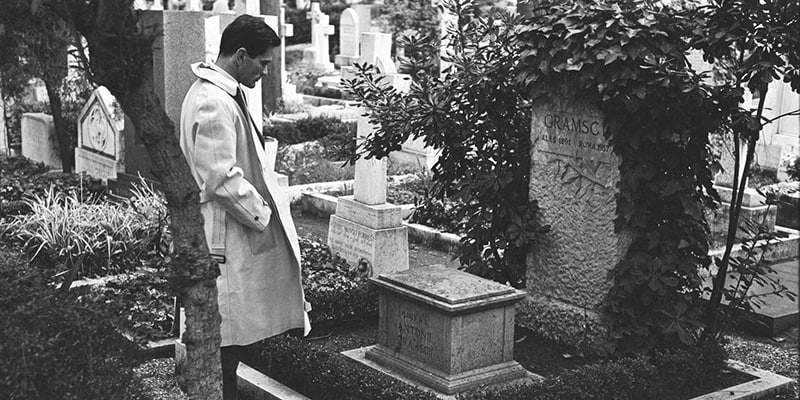 Although he wasn’t originally from Rome, Pier Paolo Pasolini is a figure inextricably tied to the history of the city. And a tragic one, at that: he was murdered in mysterious circumstances on the beach of Ostia in 1975, and every year people visit the place where his body was found, in remembrance of one of the last Renaissance men this city has known: a director, an author, a journalist, a commentator.

As a novelist, he scandalized the audiences of its time with this story set in a district that is now associated with well-off families and exclusive hangouts: Monteverde.

In the late forties and fifties, the area was a slum, and the narrator follows the main character’s descent into the world of crime without any moral judgment and making it clear that there is no redemption for the people he wrote about. A powerful read, which captures the way life is in the outskirts of Rome even to this day.

10. The Families Who Made Rome by Anthony Majanlahti – the who’s who of Rome’s aristocracy 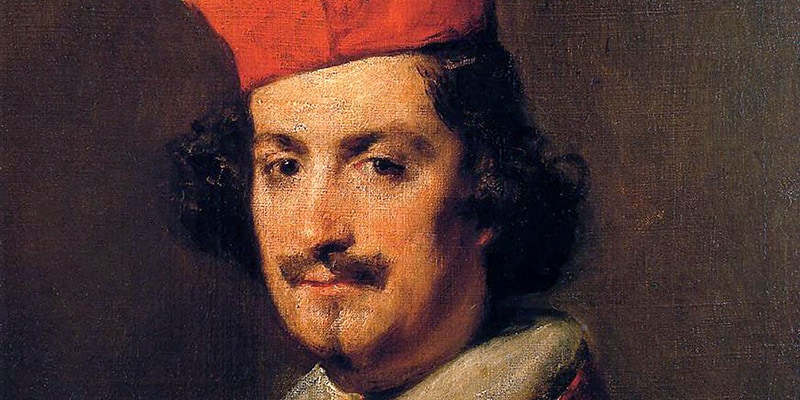 Cardinal Camillo Astalli-Pamphilj (here portrayed by Diego Velázquez) is one of the book’s main characters, image in the public domain

The Borghese Gallery, Villa Torlonia, Piazza Barberini – these are all landmarks in Rome that owe their name to the noble families who used to roam and rule the city.

To most tourists, these are just odd-sounding names and after a while trying to remember who owned what and just how many popes were elected in the same wealthy family can be… Overwhelming.

This book is a crash-course in all things Roman aristocracy, an essential read if you want to visit and learn about Rome beyond the must-sees.

Anthony Majanlahti – The Families Who Made Rome: A History and a Guide (2006)