A Guide to Michelin Starred Restaurants in Rome 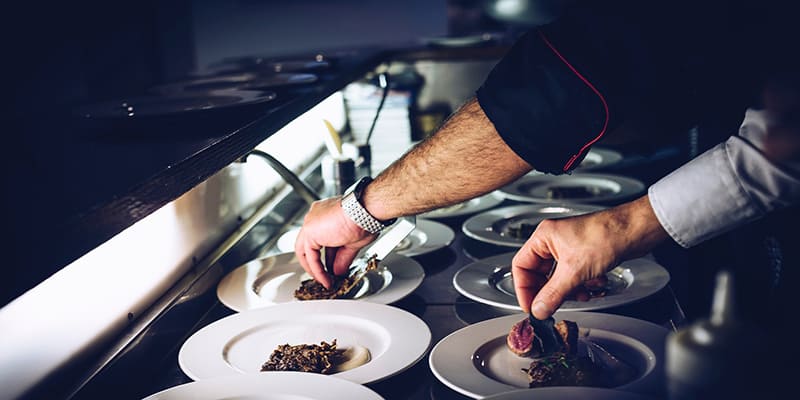 Prepare to be wowed by excellent food... Image by StockSnap sourced from Pixabay

A Guide to Michelin Starred Restaurants in Rome

If you’re a serious foodie and are planning to visit Rome, we have good news for you: the famed Michelin Guide lists roughly 30 restaurants in the city and its surrounding areas (e.g. Fiumicino). Incidentally, only Naples has a higher number of eateries that have been awarded with the internationally known star!
If you are familiar with how the Michelin Guide works, you’ll know that their judges recognize and acknowledge those chefs who stray from tradition, innovating culinary lore, sometimes with playfulness and an attitude akin to that of a rock star’s.
This is particularly true where food history is deeply rooted in everyday life: like in Italy, for example!
The mysterious inspectors at Michelin seem to love the reinvention of much loved classics and when chefs show that they have fun marrying staples of Italian cuisine along with ingredients that have been forgotten for a while. Or when they display unusual pairings, or introduce new technologies and techniques into their kitchens!
While I can’t list all current Michelin star holders in Rome – the Discover Walks bosses from upstairs would kill me! – I made a list of 5 essential must-visits, where that kind of attitude is on display. It’s not just stellar (pardon the pun!) eating – it’s also clever, and you will have fun being introduced into a world of unique tastes. Buon appetito!

1. La Pergola (AKA: what is a German chef doing in Rome?) 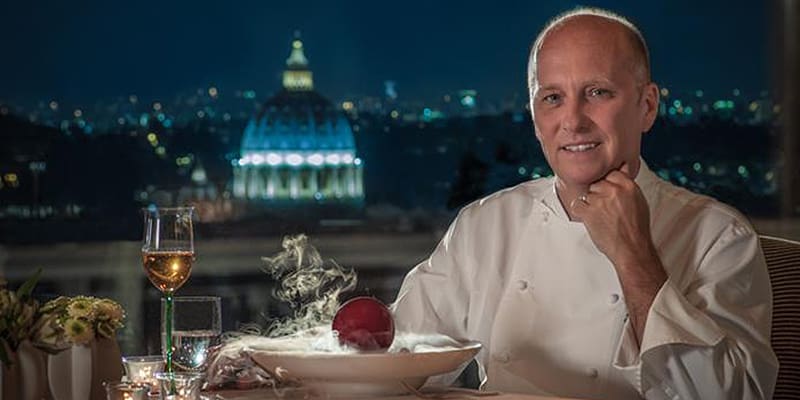 It will be a complete shock to some to learn that the most starred of restaurants in Rome is run by a German chef. Heinz Beck is something of a unicorn, in that he was supposed to stay in the city for a little while, but he ended up relocating here and has been working at La Pergola since 1994. Under his guidance, this restaurant has become the only three-Michelin starred restaurant in Rome.
Hotel Cavalieri Hilton, where La Pergola is located, is not the best-looking place in Rome. To some it may even feel far away as it’s north of the center, in the affluent Monte Mario district. And yet, it’s an absolute experience to have a meal here. Beck’s very own fagottelli (a type of ravioli-like pasta) will be one day as famous as super-traditional food such as carbonara, or pizza… Heck, they already are!
Just be warned: waiting lists at La Pergola are something huge: prepare to wait for months before you can sit at a table here. 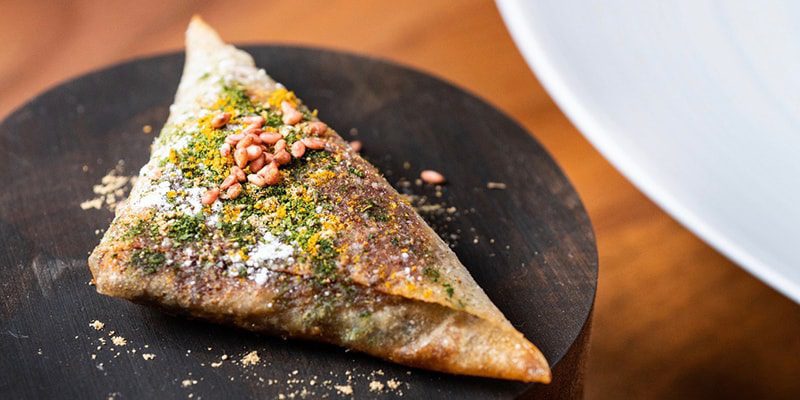 One of Anthony Genovese’s creations, images sourced from Il Pagliaccio

Il Pagliaccio (“The Clown”) doesn’t look like much from the outside. That’s just because the windows are completely opaque, giving guests complete privacy in an otherwise busy street of central Rome – famed wine bar Il Goccetto is right in front of it!
Don’t be fooled by the unassuming entrance, though: this two Michelin starred restaurant owned by chef Antony Genovese is carefully tended and shows great attention to details, to the point of making sure guests don’t sit near any other diners from their same country, so as to ensure perfect discretion, even during casual conversations.
The menu at Il Pagliaccio changes often, so as to make the most of seasonal ingredients and in an attempt to show Genovese’s great ability in showing off its main culinary influences, which range from France to Japan and Malaysia. Having worked in countries with rich food histories is Genovese’s not-so-secret weapon. His creations are inventive, colorful and surprising, like Cocoa Fettuccini or a Lacquered Eel that is to die for.
If you feel like you trust Genovese’s attitude and skill and going in blind is something that doesn’t make you uncomfortable, I recommend you pick a tasting menu called Circus: if you can afford it, it’s completely worth it as you will give Chef Anthony free rein to do whatever he pleases with your palate!

Prices for the tasting menus range from 165 Euros to 185 Euros (for the Circus experience) per person. A “mini-tasting menu” is available only at lunch for 85 Euros. Tasting menus don’t include wine or any other beverages.

3. Idylio: meet the most sought-after chef in Rome right now! 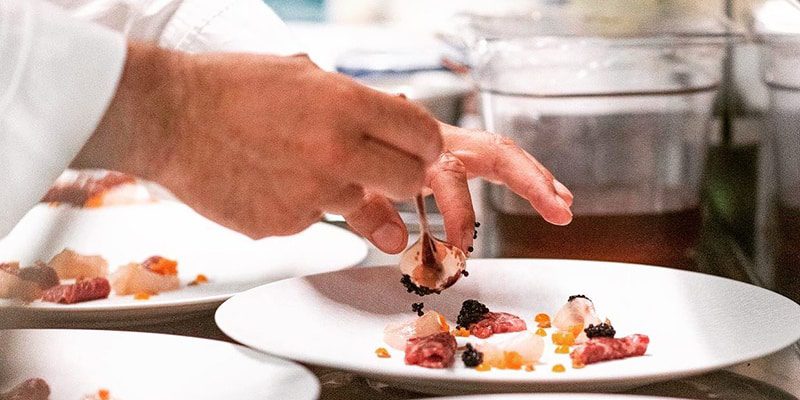 A detail of Chef Apreda working in the kitchen, image sourced from The Pantheon Rome Iconic Hotel

Some chefs are like football players, in that they can exchange teams (with lots of money involved, too) to try to win their championship – in this particular instance, a presence on the coveted Michelin Guide!
Such is the case with Francesco Apreda, who was the chef at Hotel Hassler’s Imàgo (a restaurant that has maintained its own Michelin star even when he left) and opened Idylio at another fancy hotel, The Pantheon Iconic Rome Hotel / Autograph Collection.
Apreda is originally from the Campania region, but has been living in Rome for over 15 years. Therefore, his approach in the kitchen is very much a reinterpretation of Roman classics with a Neapolitan twist: see his Roman-style chicken with roasted bell peppers or the Vignarola, a sort of salad served warm. These may be the reason why inspectors granted Idylio its first Michelin star during its first year in operation!

Tasting menus have prices ranging between 120 Euros and 160 Euros per person, beverages not included.

4. Glass Hostaria: a woman under the influence of… great ingredients! 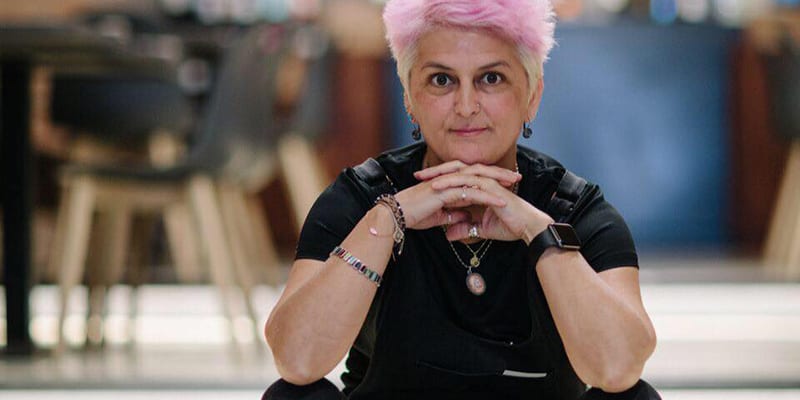 Cristina Bowerman, the only woman in this short list of Michelin starred restaurants in Rome, is a fixture of the Roman fine dining scene. Not only she is the chef at Glass Hostaria, smack dab in the middle of the alleys in Trastevere, she is also the mastermind behind a number of other establishments in the city, from bakeries to bistros – a powerful figure in the national food scene.
With her signature pink-dyed hair, she brings a punk attitude to the table, where she likes to astonish by using rare or under-represented ingredients to revive and renew Italian dishes. In her menus you will find caviar and tapioca, sea-urchins and frangipane – you have to try some to believe it!

Tasting menus range from 90 Euros to 160 Euros per person, beverages not included.

5. Assaje: luxurious and simple, where rich people hang in Rome 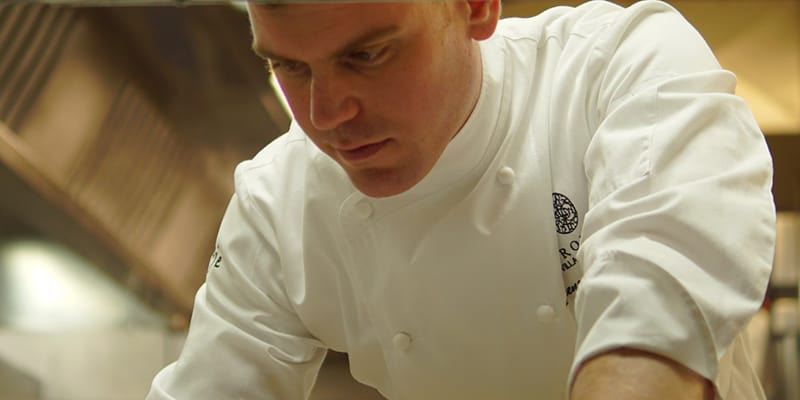 Lorenzo Di Gravio is the youngest chef in this list. He is a former soldier who gave up his career in the military to follow his passion for great food.
You will find him at this Neapolitan-named restaurant (“assaje”, roughly pronounced “hass-ah-ee” means “a lot!”) walking distance from the Galleria Borghese museum and the Villa Borghese park, in an affluent area of Rome. The restaurant sits inside the Hotel Aldrovandi.
Inspectors at the Michelin Guide were seduced by Di Gravio’s recipes: “either classic or more imaginative, they’re served with great professionalism and friendliness”, they wrote.
Warmth seems to be the operative word here: Chef Lorenzo doesn’t just cook beautifully executed dishes – he also seems to be constantly conjuring memories from the food he must have eaten back home when he was a kid, trying to mix those past meals with new and inventive ingredients and juxtapositions.
His cooking style is not overly complicated and this reflects in his signature dish: a herb-crusted lamb loin with chickpeas cream, red onions and cherry tomatoes is totally something we could be doing at home. You know, if we had the right tools!

Tasting menus range from 150 to 170 Euros per person, beverages not included.

Do you have any food restrictions? Read here! 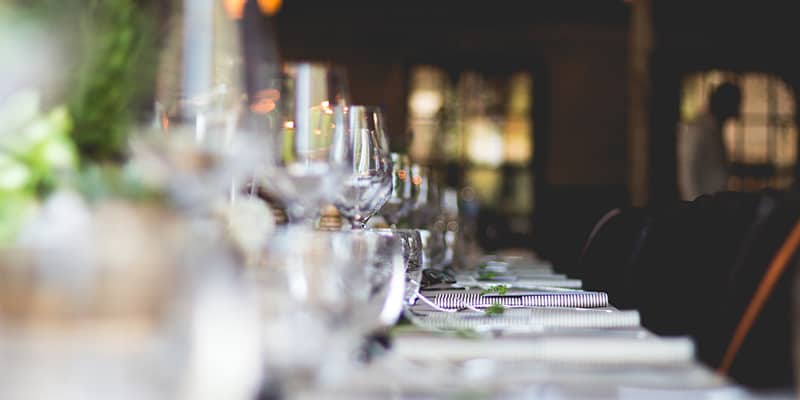 Remember to wear appropriately in a Michelin starred restaurant! Image by Nils Stahl sourced from Unsplash

Michelin starred restaurants are typically happy to accommodate anyone with a food allergy or a dietary restriction, but these special dishes must be requested and agreed upon beforehand, at the same time when you’re making your reservation. Every restaurant will have different policies and practices on these issues.
In any case, if you or someone from your party don’t eat certain types of food, be it for an ethical or a medical reason, you won’t be able to get the full experience at some of all of the Michelin starred restaurants in Rome – which tend to cater to flexitarians and omnivores for the most part.

A final note: why the menus change all the time in Michelin starred restaurants?

I made every effort to list the current signature dishes at every restaurant I listed in this article. But if you’re new to the fine dining scene, you will probably be unaware that menus at these highly rated eateries tend to change often.
Keep in mind that they are to chefs what collections are to fashion designers. So if you’re reading this, say, one year from today, you may not be able to find the same items on the menu!