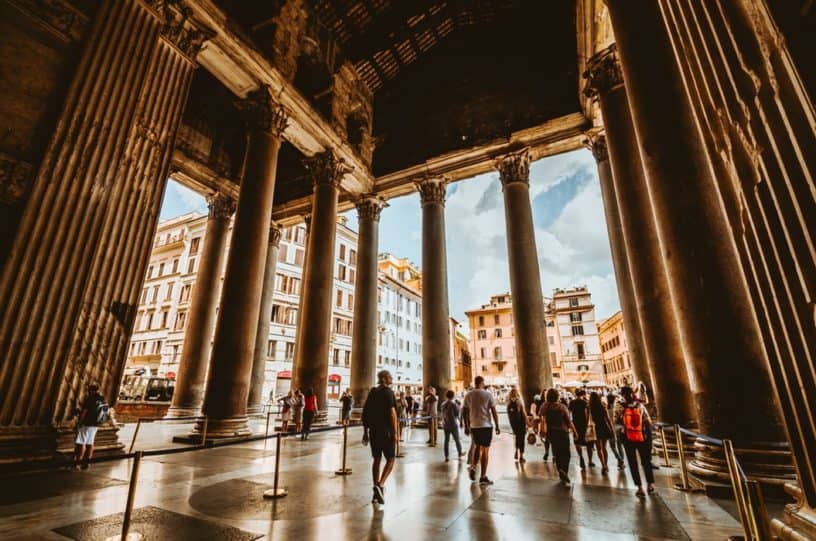 For many people around the world, just getting to Italy is a bucket list item that they hold onto for years and years. Being able to explore the ancient city of Rome to its core adds a whole new level of excitement.

Rome is a theme park park for grown ups; a grand outdoor museum filled with treasure troves and tasty treats around every corner. I’ve complied a list of 20 things one simply must do their first visit to the ancient city. Tick them off one by one — shall we?

1. Toss a Coin Into the Trevi Fountain in Rome

Perhaps the most cliche of activities for any traveler to Rome; tossing a coin into the Trevi Fountain makes your arrival in Italy official.

Each day, thousands of people from around the world venture to this exquisite fountain in the center of Rome to toss their spare change using their right hands over their left shoulder. This is said to bring luck and prosperity.

The fountain collects roughly 3000 euros per day and is drained of coins regularly. Rome profits millions of euros per year through the fountain, and it is all put toward charities.

Another very obvious but very important activity for one’s arrival in Rome.

You’re going to eat a lot of pizza and pasta while in Italy, so there’s little urgency on this. But out of all the Italian cities Rome definitely has the best of the cuisine on offer, with Verona coming a close second (in my opinion).

Take advantage of your days in Rome and try as many of the little trattorias scattered through the streets. Italian cuisine is traditionally passed on through generations, and few of them will be the same experience as the other.

3. Explore the Colosseum in Rome

The Colosseum is Rome’s pride and joy. It’s situated in the district just east of the River Tiber, it is passed when on a guided walking tour as one heads west.

You can view the Colosseum from the outside, at street level. Even from here it is a fascinating structure, but if you want to explore the inside, or the underground chambers, you’ll have to pay to enter for the day. 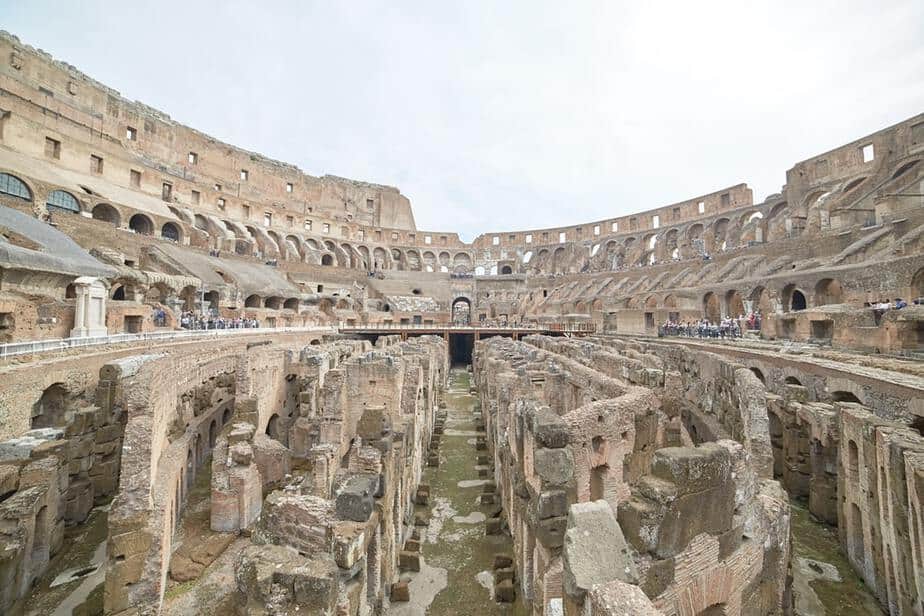 If you’d like to beat the queues then purchasing tickets online prior to arrival is recommended.

As much as you’ll eat pizza and pasta in Rome, you’ll eat equally as much gelato. Gelato originated in Italy, and has become a kind of art form in the Italian cooking world.

The gelaterias of Rome silently compete with one another to make the smoothest, tastiest ice creams. They are even experimenting with vegan gelato these days, which allows a wider market of travelers to enjoy the cuisine.

5. Take a Photograph on the Spanish Steps in Rome

The Spanish Steps are considered one of Rome’s most iconic spots. They old staircase cascades from one town plaza down into another, connecting two neighborhoods of what is considered to be the more elite part of Rome.

Taking a photograph on the steps is the best way to commemorate your visit. They are generally too crowded to hang around for too long. 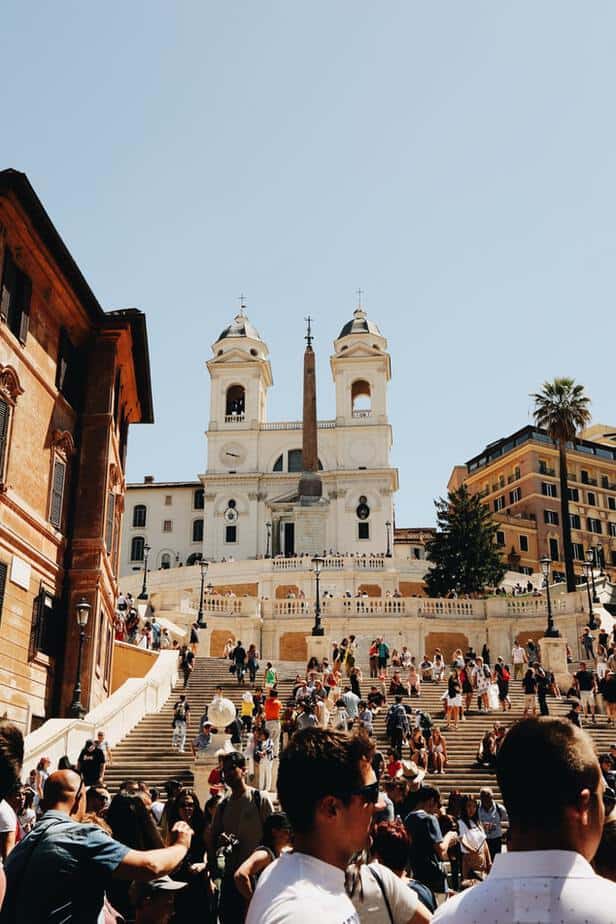 The Campo de’ Fiori is the oldest market in all of Rome. It runs six days a week, only taking a break on Sundays.

The market is mainly centered around fresh produce and quality meats from around Italy. There are many food stalls where one can taste local cuisine and purchase dry stock to take home as travel souvenirs.

This is a great spot to do grocery shopping if you are staying in an Airbnb in the center.

OPENING HOURS: Monday to Saturday – 7am to 4pm

7. Walk Along the River Tiber in Rome

The River Tiber essentially cuts the city of Rome in half. It separates the east from the west, with Rome’s ancient quarter falling on the left bank.

Taking a stroll along either of the river banks is a romantic and whimsical experience regardless of the time of day. Sunset and sunrise are undoubtably the most charming hours, but even a midday walk, gelato in hand, becomes one for the bucket list. 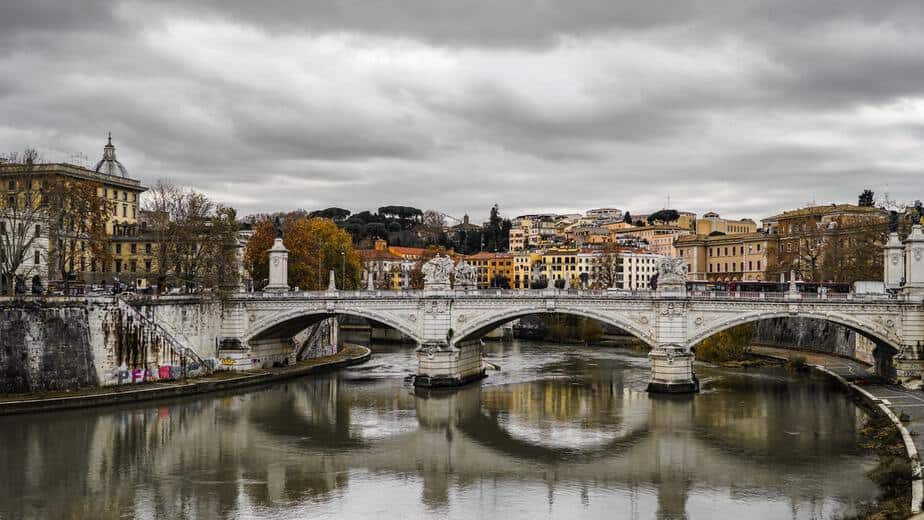 8. Drink and Dine in Trastevere in Rome

The Trastevere neighborhood can be explored through a guided walking tour, but making your way around alone on an evening of drinking and dining really shows how this district comes to life.

Trastevere is the neighborhood south of the Vatican City. It’s filled with cafes, restaurants, bars, boutiques and a perpetual street buzz.

9. Marvel at the St. Peter’s Basilica in Rome

Seeing St. Peter’s Basilica in the flesh tops bucket lists around the world. Seeing the church is often more important to travelers than seeing any other part of Italy.

The first time you walk up to the Basilica is one you’ll never forget. The pillars will lure you in before you’re close enough to even see the entry detail. The Basilica is open daily to visitors, it will, however, be closed if The Pope is scheduled to make an appearance for the people.

10. See Michelangelo’s Masterpiece in the Sistine Chapel in Rome

The Sistine Chapel is situated inside the Vatican City. It is the chapel of the Apostolic Palace, which is where The Pope lives. One can visit the chapel as an add on to any Vatican museum tour, or simply via a chapel tour alone.

This is another Roman attraction that you won’t forget. Michelangelo began his work here in 1508. 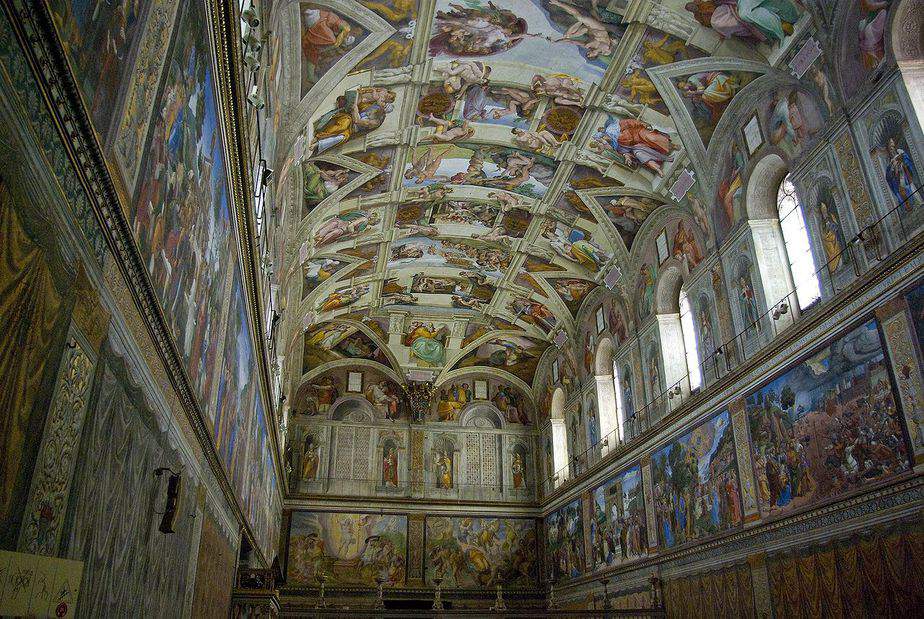 OPENING HOURS: Monday to Saturday – 9am to 4pm

Italy is a wine country. It is actually the largest producer of wine in the world, and the people are very proud of their produce.

Sampling local wines can be done at restaurants, cafes and tasting rooms throughout the city center. One can also take a day trip out of Rome to any of the wine farms nearby.

12. See An Italian Opera at the Teatro dell’Opera di Roma in Rome

The first link a lot of people have to Italy is the opera.

If you’re a fan of this kind of performance, or just live theatre in general, then attending the opera in Rome has probably been on your bucket list for quite some time.

The Teatro dell’Opera di Roma is in the Colosseum district and has been part of the city since the 1800s, having undergone many renovations and improvements over the years. It’s a grand space that seats 1600 people at once.

13. Ride Through the Streets on a Vespa in Rome

Riding through the streets of Rome on the back of a Vespa (ideally owned by a complete stranger) has been the key scene of many an Italian film. In fact, if you grew up in the 90s and ever watched Lizzie Mcguier then this activity has been on your bucket list since before you could spot Italy on a map.

This one can be accomplished in a few ways; you can wait for the kind stranger to whisk you away, or you can hire a Vespa directly from the rental houses around the city center. 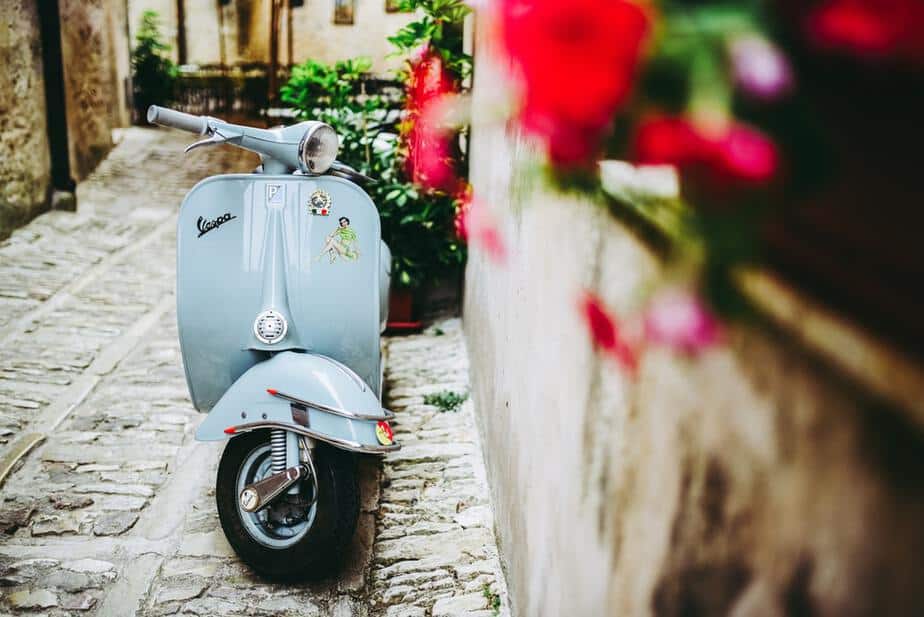 14. Shop at the Galleria Alberto Sordi in Rome

You’ll find this phenomenal shopping complex back in the district of Trevi, the one where you tossed your coins into that fountain.

The building itself is a work of art, featuring Italian mosaic and stained glass windows. The streets surrounding the galleria hold smaller boutique stores with local fashion. 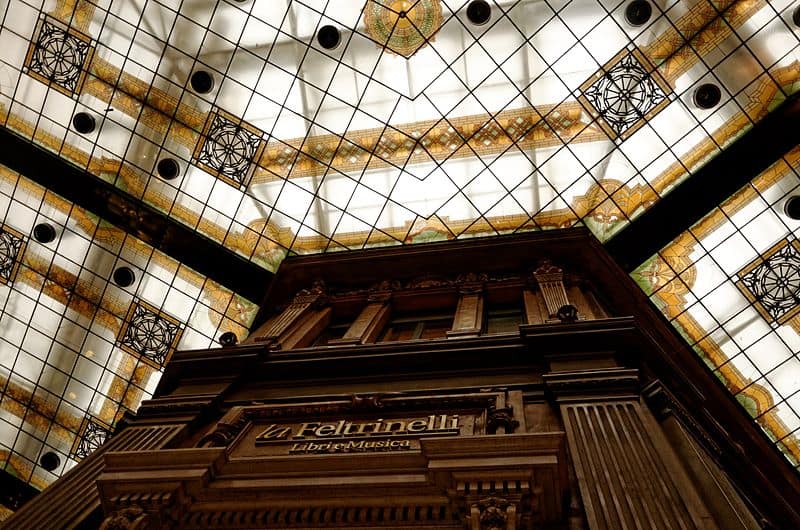 15. Walk the City by Night in Rome

Taking a guided walking tour through Rome by day is a good way to connect with the history, architecture and culture. Walking Rome by night, without plan or time constraints, will connect you to the soul of the city.

Rome comes to life once the sun goes down. A city that you probably thought couldn’t get more charming, is suddenly something out of a dream. It’s beautiful to walk with a friend or lover, but alone is absolutely perfect, too. 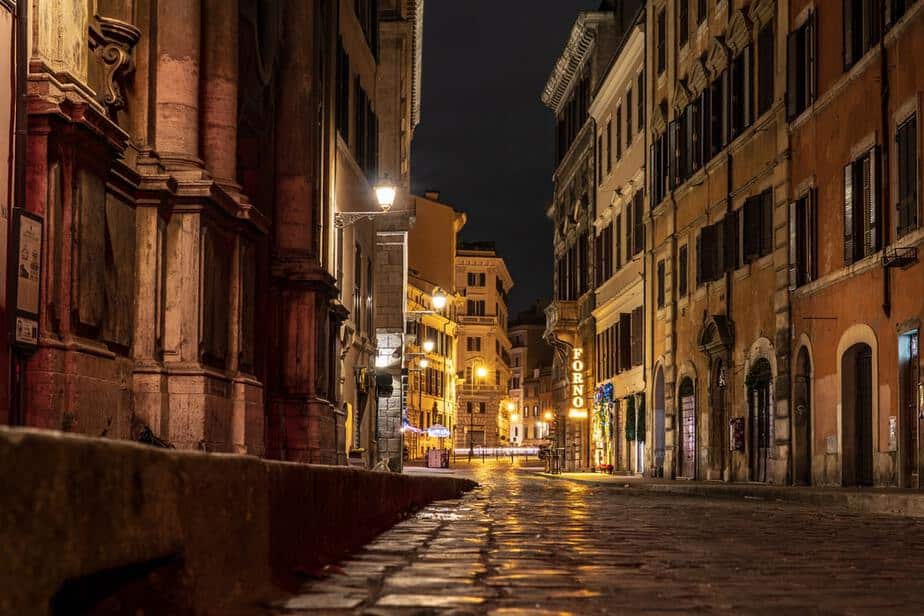 16. Watch a Jazz Show at the Casa del Jazz in Rome

Rome’s House of Jazz is in the far south of the city. It’s a journey to get to, but there are jazz concerts, performances, screenings and meetings related to the genre that happen daily.

True jazz lovers coming to Italy will likely already have this item on their travel bucket list. It is one of the most prestigious jazz houses in Europe.

If you’ve ever dined with an Italian family you’ll know the sanctity of espresso after dinner.

In Italy you’ll enjoy some of the finest coffee in the world. Espresso is typically served after a meal to aid digestion; at breakfast, lunch and dinner — it matters not.

A word from the wise? Try not to insult Italian coffee during your time in Rome, especially not to a local. This rule applies in Portugal as well. Europe takes their coffee very seriously.

18. Hang Out in Piazza Navona in Rome

Rome has many public piazzas and you’ll wander through most of them on a whim as you make your way around the city.

The Piazza Navona is one of the most historic public squares in Rome. It is believed to be the site where the ancient Romans once gathered to watch the “agones”. These were usually public battles involving chariots and horses. 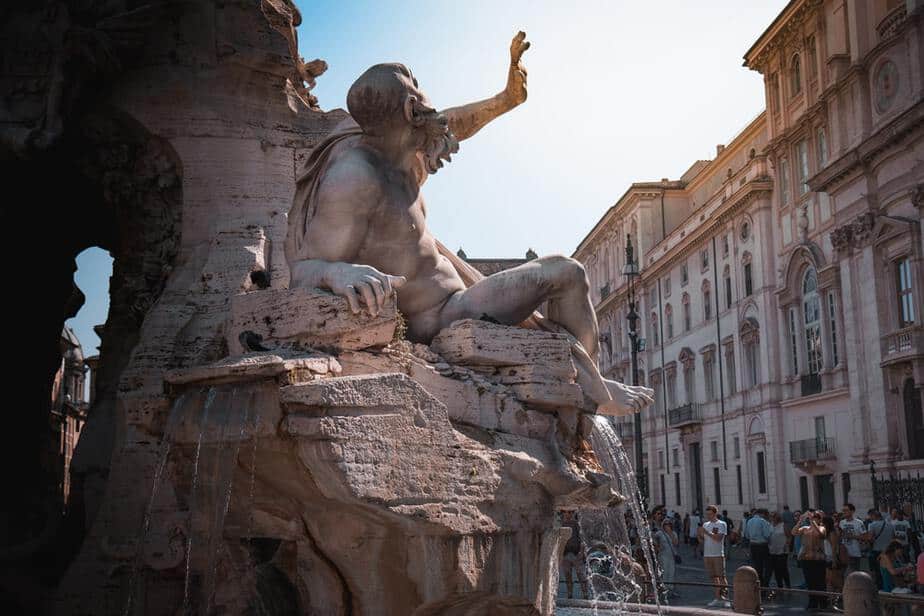 19. Take a Day Trip to Ostia from Rome

Rome has a lot to offer, but is deeply lacking in places to swim when the summer heat is at its peak. You’ll be able to make use of public and hotel pools around the city, but Rome does have a beach quite close by.

Ostia would be the closest. It can be easily reached by train or taxi and the journey takes about half an hour. Spending a day at this coastal village gives a whole new perspective to Rome and the local culture.

20. Explore the Museums in the Villa Borghese in Rome

The Villa Borghese is an impressive public park in the north of Rome. It is worth an hour or two for a stroll or a picnic, just to be able to see the vast green space. The park was one a lavish villa that was designed by Ponzio & Vasanzio,, the gardens are now open to the public.

The park also holds a number of buildings and museums. The Borghese Gallery and Museum is wonderful for classic art lovers. Modern art lovers should head to the Museo Carlo Bilotti on the park’s west end. 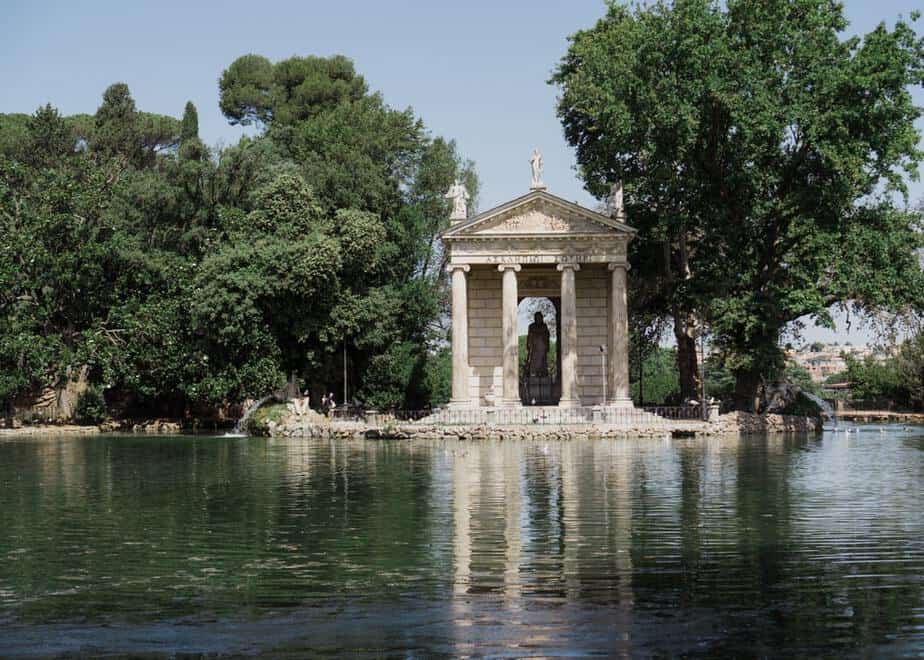