10 Jaw Dropping Facts About the Pantheon in Rome 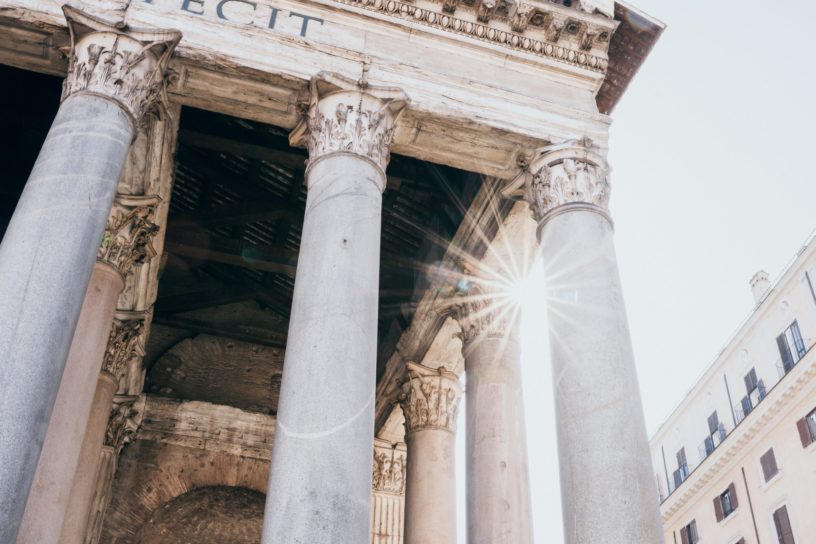 10 Jaw Dropping Facts About the Pantheon in Rome

The Pantheon is one of the most important monuments still standing in the ancient city. It lies a few minutes west of the Trevi Fountain, accessible by a short walk or taxi ride.

The Pantheon is impressive for a multitude of reasons. It remains the subject of endless fascination and speculation by philosophers and historians around the world.

Here are a few things you probably didn’t know about this ancient structure. 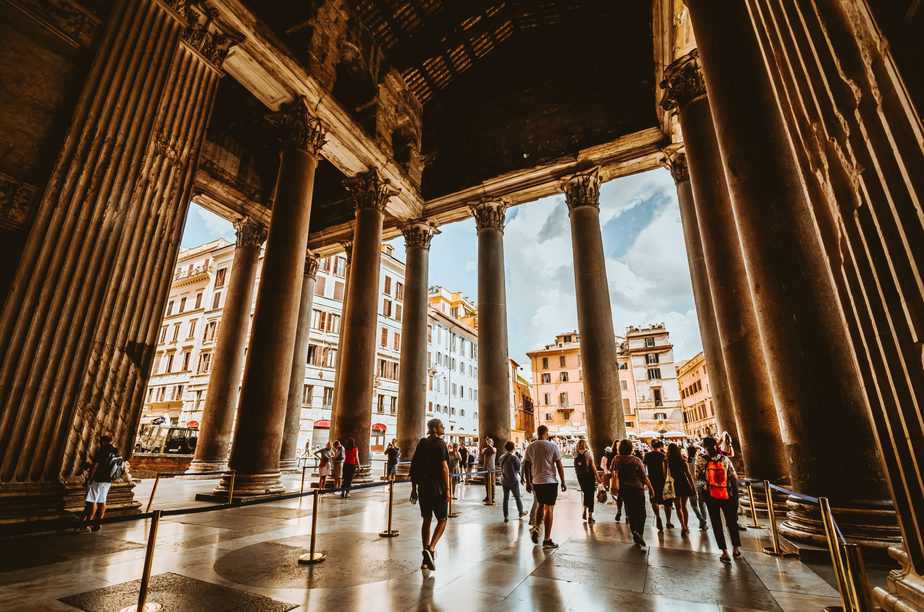 1. The Original Pantheon Actually Burnt Down

Actually, the first two Pantheons both burnt down, and the one we admire today is the third and final installment of this historical site.

The first Pantheon is thought to have been constructed in 27 BC. Following its demise, a second was constructed in the early 1st century AD, but it also saw its end to flames.

The third rendition was constructed around 125 AD and managed to survive all fires and erosion throughout most of history in the modern world. It’s seen more eras than most of us can comprehend. 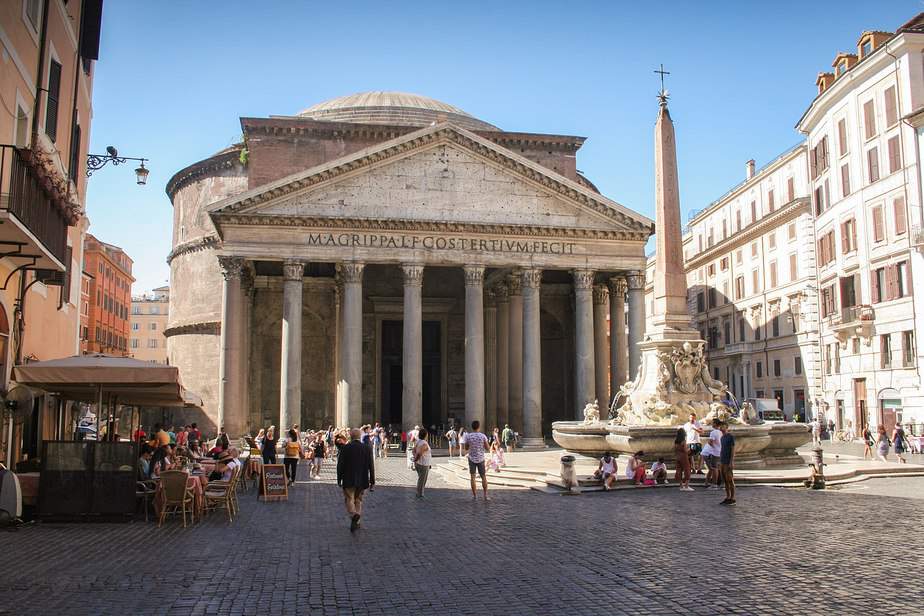 2. The Roman Pantheon is the Largest Unreinforced Concrete Dome in the World

The Pantheon wouldn’t be what it is today without the presence of that concrete dome. Measuring 142 feet in both height and diameter, this structure takes the gold as the world’s largest unreinforced concrete dome.

Architects have concluded that an array of different types of cement were used during the construction of the dome, allowing for different weight distribution.

3. There is a Giant Hole in the Ceiling

If the dome itself weren’t already impressive enough, let’s add a giant 27 foot wide hole in the ceiling.

Known as the oculus, the hole in the Pantheon serves as the only form of natural light managing to find its way into the interior. It is thought by some that the oculus might have been used as a sun dial in ancient times. 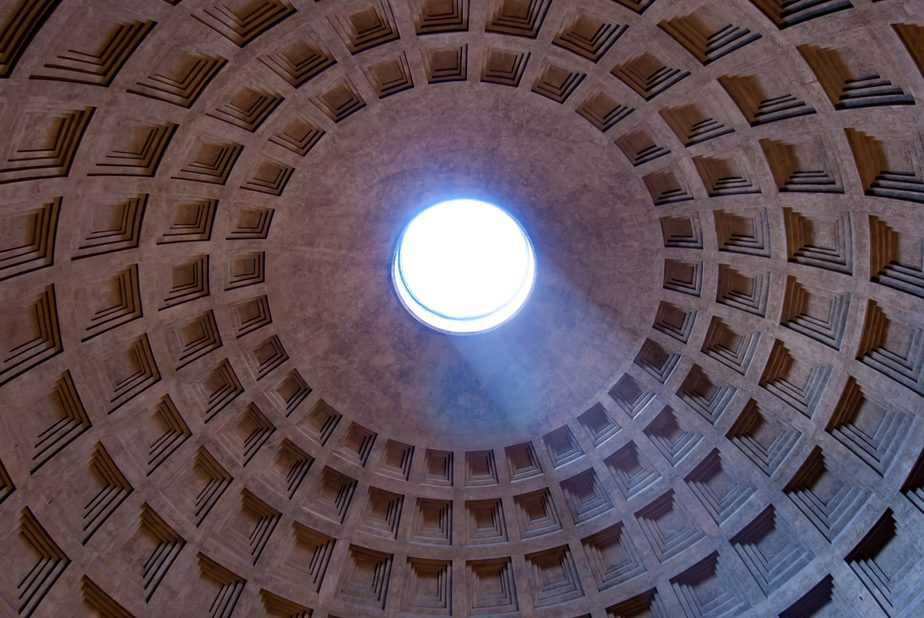 4. The Roman Pantheon Was Once Covered in Bronze

That’s right, most of the Pantheon’s facade was originally covered in a layer of bronze.

Throughout history, the bronze was slowly stripped away over time for use in other necessary areas. For example, in 1631 the pope ordered that whatever bronze could be stripped from the Pantheon ought to be in order to make cannons for the Castel Sant’ Angelo.

5. It Wasn’t Always a Church

The originally intent behind the construction of the Pantheon was a temple of worship dedicated to all of the gods in pagan Roman tradition. It served as this for the first five hundred or so years of its existence, until its function was changed in 608.

Emperor Phocas gave the temple to Pope Boniface IV as a gift, and he removed all of the pagan artifacts and transformed the space into a Catholic church. It still serves as this today. 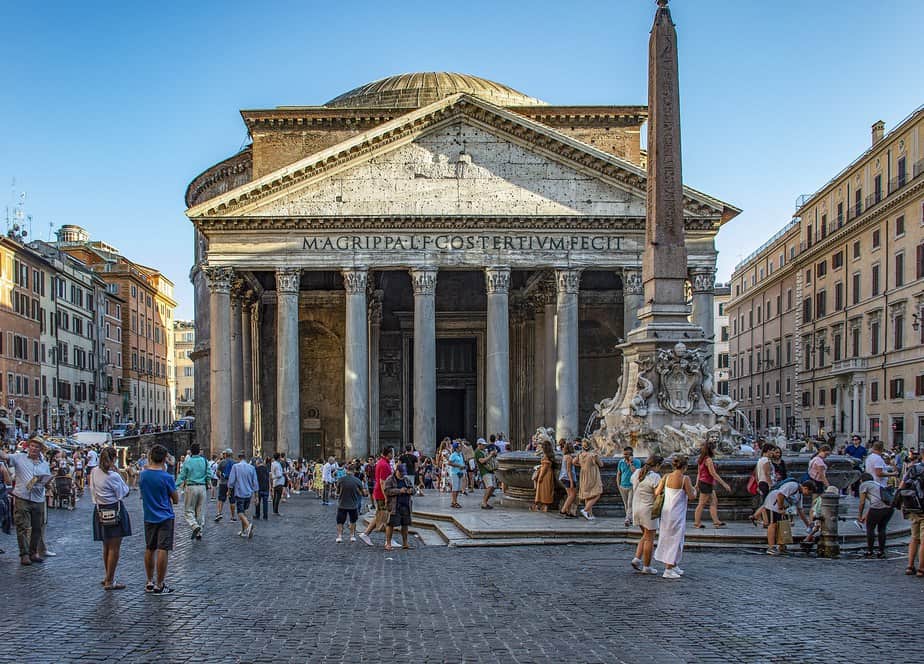 6. There are a lot of Dead Bodies Inside of the Pantheon

When the Renaissance era swept through Italy, the Pantheon began to serve a different function in society.

This was where the country’s most important artists were laid to rest in tombs. Raphael, Annibale Carracci, and composer Arcangelo Corelli are all still residents at the Pantheon in Rome.

Respective kings and emperors were also put to rest here, along with a few of their wives. 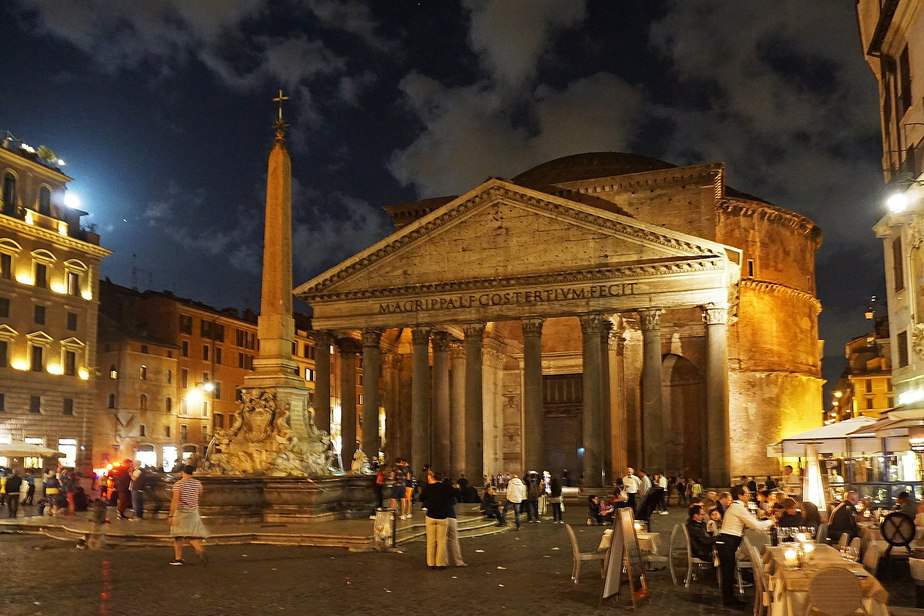 7. It Inspired the Pantheon in Paris

In fact, it inspired quite a few monuments around the world.

The Pantheon was the point of great envy for rulers in other parts of Europe, and its design was often mimicked as a display of great power.

Over in Paris, Louis XV commissioned Jacques-Germain Soufflot to build the city a Pantheon of its own. The monument stands in the French capital today, baring uncanny resemblance to the one in Rome. 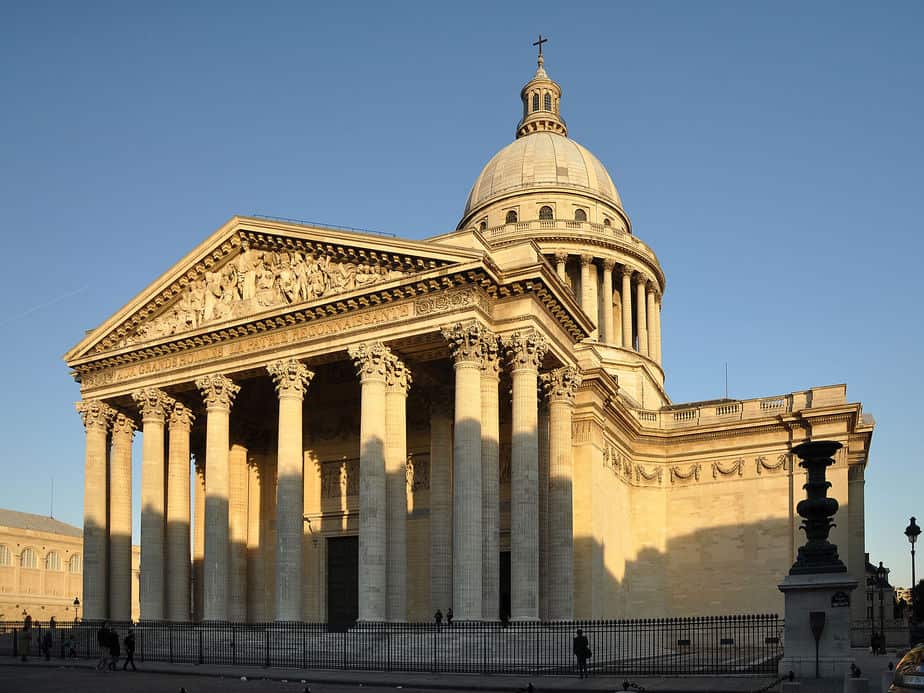 In 1822, a replica dome was also constructed at the University of Virginia in the United States under the leadership of Thomas Jefferson.

America has actually copied the Pantheon more than a few times. The Jefferson Memorial in Washington D.C and the US Capitol Building are also derived from this monument.

8. The Exterior May Have Involved a Mistake

If you gaze at the facade of the front entrance to the Pantheon, you’ll notice a series of pediments that are supported by Corinthian columns.

One of the pediments is noticeably out of line in comparison to the others. Some speculate that this was completely intentional on part of the designers, while others believe that during construction they actually ran out of the full sized columns and had to improvise with a shorter.

One of the trials, and beauties, of a building this old is that there will always be something we never get to know for sure. 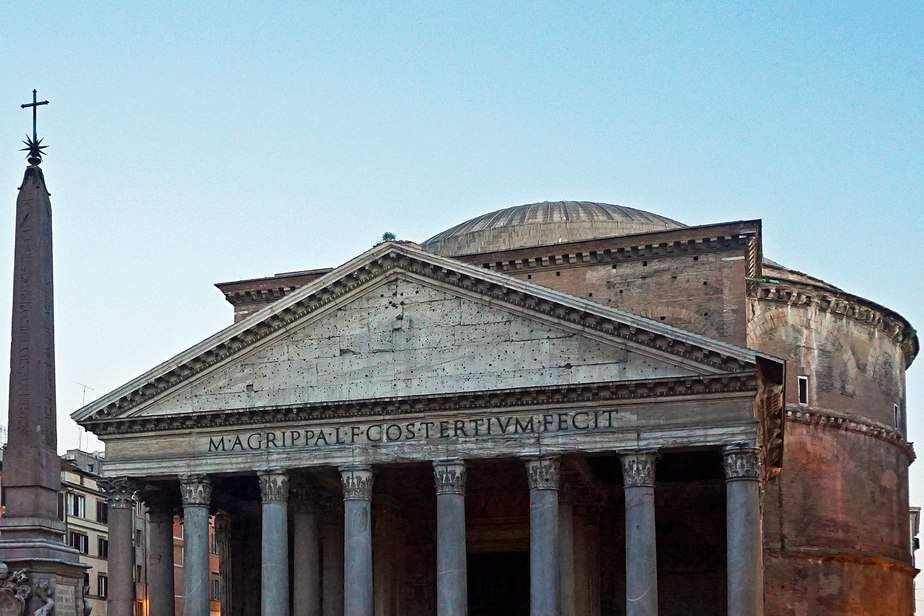 9. A Perfect Sphere Could Fit Inside

The design and execution of the Pantheon in Rome is so close to perfection, that a giant sphere would actually fit perfectly inside of the building were it ever necessary.

There are so few discrepancies in the angles of the dome, that a sphere would fill the space impeccably. That same sphere would fit in the lower region of the building too, and is said to symbolize the ‘vault of heaven’ embedded in the space. 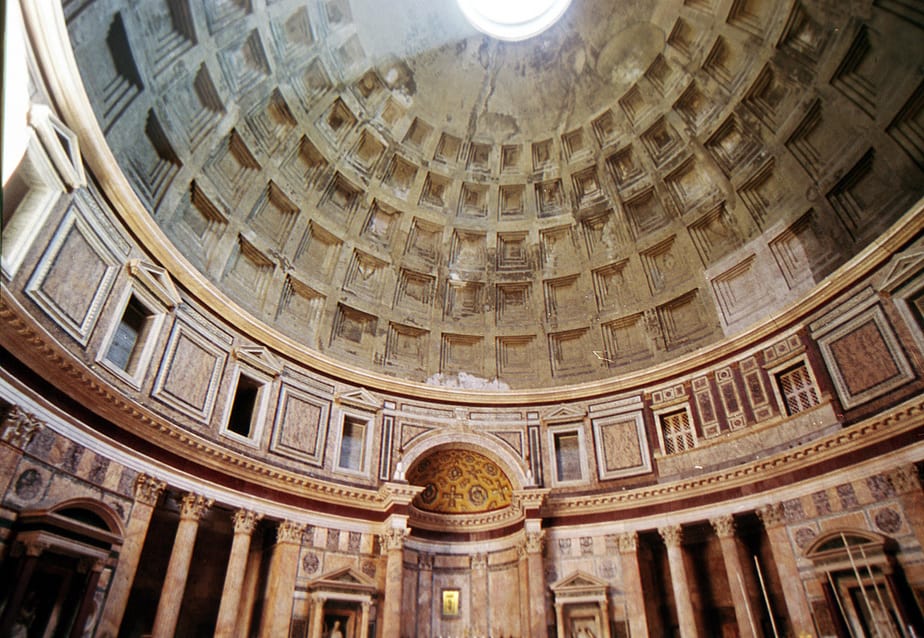 10. Michelangelo Had Some Final Words to Share About the Pantheon in Rome

Our friend Michelangelo was known to be a hard one to impress at the best of times. He rarely gave compliments and was an incredibly harsh critic when it came to any of the arts.

When asked to share his thoughts on the Roman Pantheon, Michelangelo remarked that the monument was of “angelic and not human design”. I think that just about summarizes it, folks.