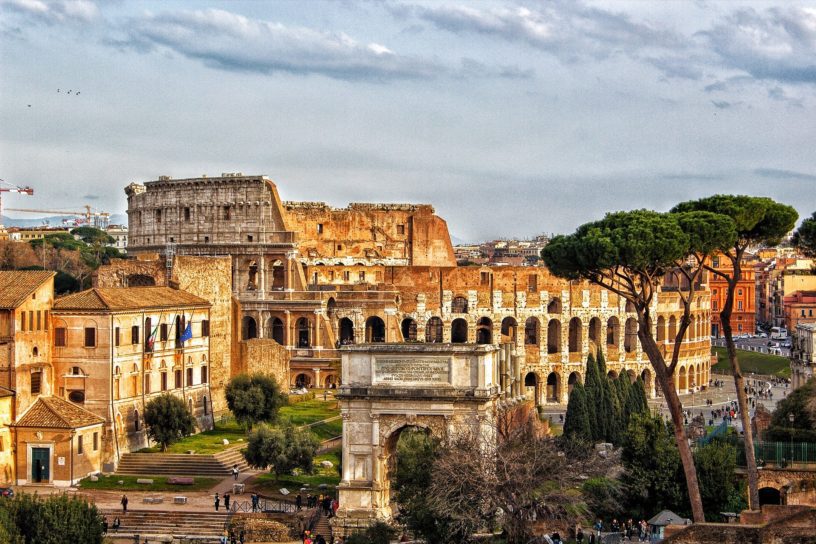 The Colessum by Andrea Albanese - Pixabay 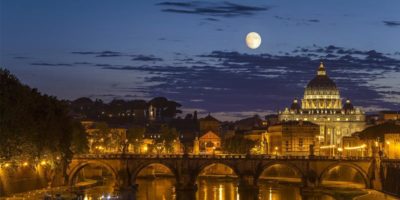 Places to See the Best Views of Rome at Night

The “eternal city” is a city full of many things to do, with unique and unforgettable places to discover and see.

If you are a first-timer to the city and you are planning a short visit with little time, then don’t worry. You can visit Rome in 2 days! With this itinerary, you will see the best of Rome, the famous landmarks and its most iconic sights.

Start with the Triton’s Fountain 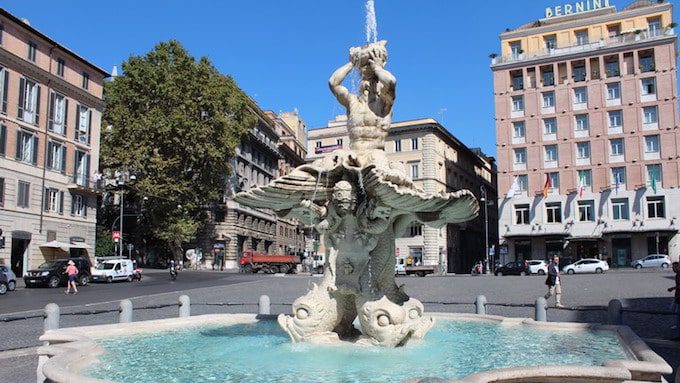 The fountain created by Gian Lorenzo Bernini rises in the middle of the square. You will notice four dolphins holding a large open shell, where the sea god Triton stands.

Among the twisted tails of the dolphins, you can admire the Barberini family crest. A coat of arms characterized by the three bees that allude to the triumph of Divine Providence.

Take photos of the Spanish Steps 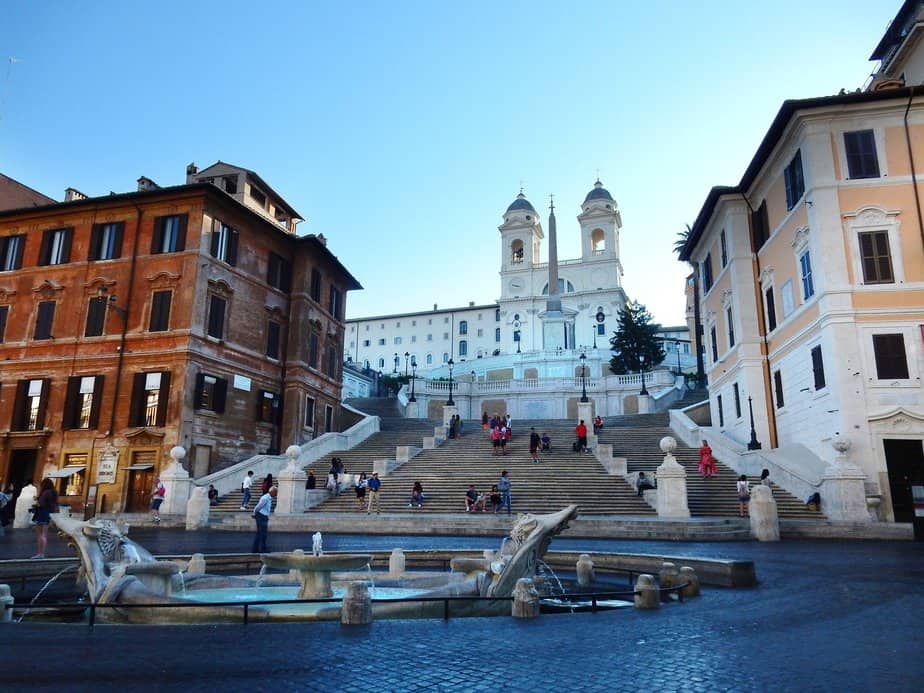 A stone throw from Piazza Barberini you will find Piazza di Spagna. This square is one of the most famous in Rome. Here you will find a stairway made of 136 steps known as “Trinità dei Monti”.

Today, unfortunately, it is no longer possible to sit on the steps for a break. But you can take still take some beautiful pictures!

Here you will find the famous “Fontana della Barcaccia”. Bernini thought of a fountain in the shape of a boat.
It is said that most likely he was inspired by a boat carried there from the Tiber in flood.

If you have a bottle of water with you, you can safely fill it in! The water is drinkable!

Throw a coin in the Trevi Fountain 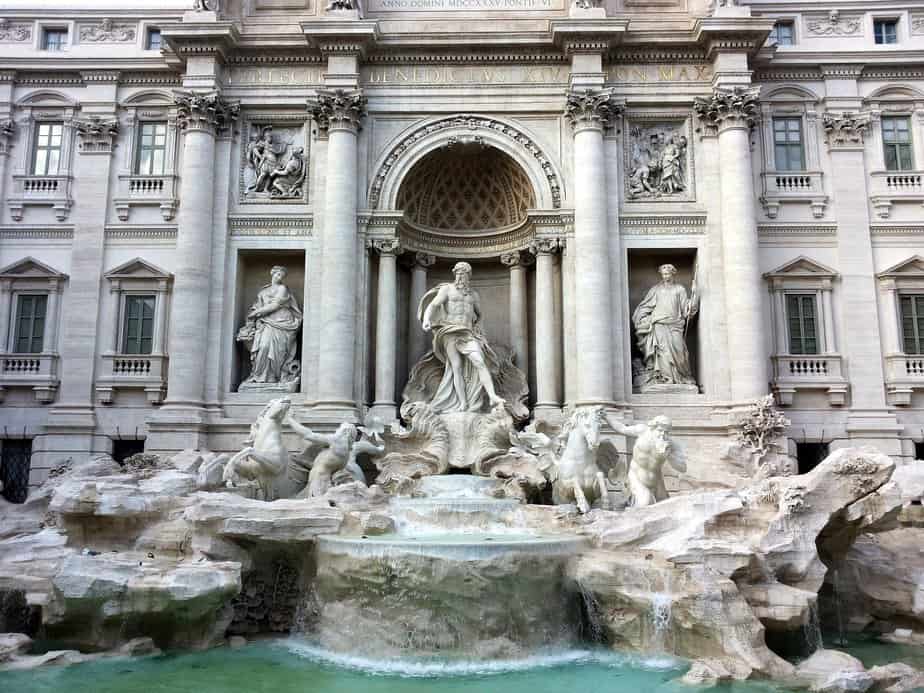 From Via del Tritone you will arrive at Piazza in Trevi with the Trevi Fountain. The fountain is the most famous in all Rome and is a must-see! and it is a tradition to throw a coin into the fountain to ensure your return to Rome.

The Trevi Fountain is a Baroque water feature and stands on the facade of Palazzo Poli since 1731. The fountain was later completed in 1762 by Giuseppe Pannini.

The theme of the entire composition of the fountain is the sea. You will see a rocky cliff that occupies the entire lower part of the building. In the center you will find a large niche with a large statue of Ocean towed by two winged horses. On the sides, there are two other niches, occupied by the statues of Health and Abundance.

If you prefer to avoid the crowd then try and pay a visit to the fountain at dawn! It’s well illuminated and you will have it all for yourself!

Head to the Pantheon 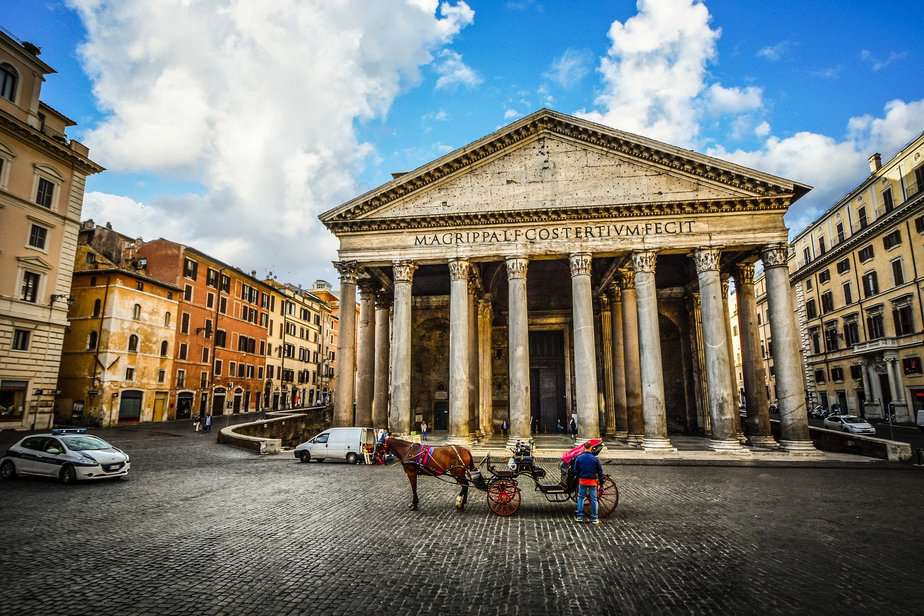 Following Via del Seminario you will arrive at the Pantheon with its square.

Agrippa required the construction of the Pantheon in 27 BC. During ancient times the Pantheon was the temple dedicated to all the Roman gods.

But in the seventh century became a Christian Basilica dedicated to “Santa Maria”. Today this minor basilica is also known by the inhabitants of Rome as “the Rotonna” (aka round).

Once inside the building, you will be breathless.

Thanks to its position and the oculus in the dome you will be able to admire some outstanding light effects.

During the equinox, for example, the light always strikes the same point on the door.

On April 21 instead, the light beam reaches a granite circle on the floor, near the entrance.

Right outside, take your time to wander and admire the Pantheon and the Piazza della Rotonda.

Pay a visit to Piazza Navona 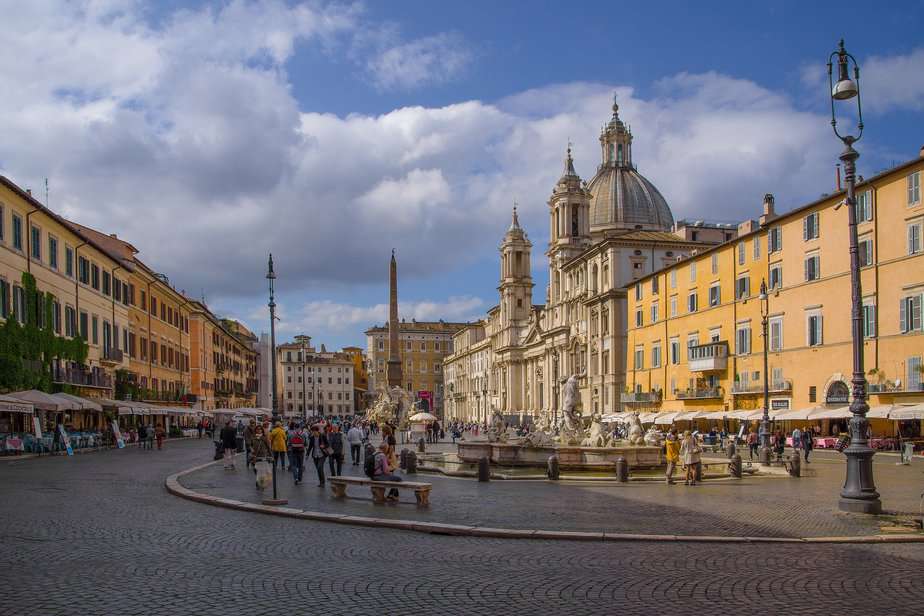 During ancient times, Romans built the “Stadium of Domitian” here, and they used it for athletics competitions. The stadium had a concave shape and during the games, they overflowed it with the water of 4 fountains.

Now in Piazza Navona, you will see a square with a completely Baroque style. Here you will find the Fountain of the Four Rivers exactly in the centre of the square.

Bernini represented the Ganges, the Danube, the Nile and the Rio della Plata (the four corners of the Earth).

Make your way to the Colosseum 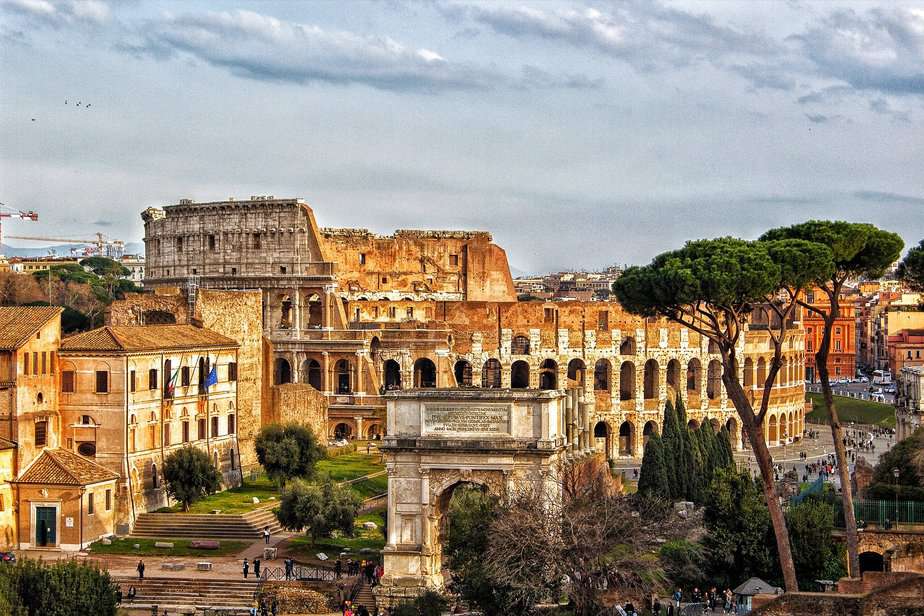 You only have two days to visit Rome, but you can’t miss the Colosseum.

Take the underground B and get off at the “Colosseo” stop and as you walk out of the station you will be out of breath.

Here you will find the largest amphitheatre in the world that can hold between 50,000 and 75,000 spectators. The construction started in the Flavian period (71 AD) at the behest of Vespasian and ended in 80 AD with Tito.

The Colosseum was a public place where various activities took place such as:

If you prefer to avoid the queue and save time you can buy the tickets online.

With € 20 you can admire the Colosseum, the Roman Forum, the Palatine Hill and the Arena in 1 hour!

The Colosseum is open every day from 08.30 to 16.30 with the last entry one hour before closing time. 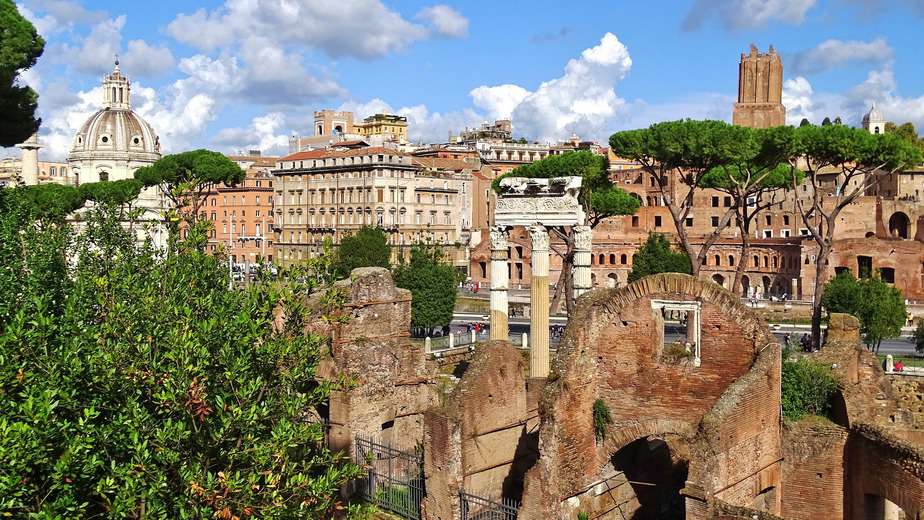 The Roman Forum by neufal54 – Pixabay

A stone’s throw from the Colosseum you will find the Roman Forum.

This archaeological site has different buildings and structures that have accumulated over time.

The area conceived as a necropolis became later an important place for the Romans.

If you prefer to avoid the queue and save time you can buy the ticket online.

With € 20 you can admire the Colosseum, the Roman Forum, the Palatine Hill and the Arena in only 1 hour!

You will find the Roman Forum in Via dei Fori Imperial. The Forum is open every day from 08.30 to 16.30 with the last entry one hour before closing time. 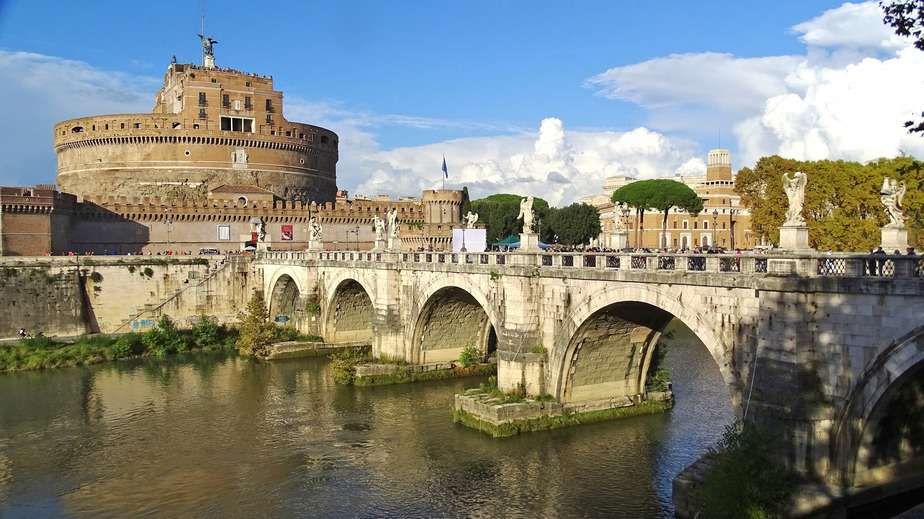 This Roman building has a long and varied history. Over time it has undergone many changes that have allowed it to survive.

The castle built in 123 AD was a grave created for Emperor Hadrian and his family.

But over time, many Roman families competed for the building.

In 403 AD the building incorporated the Aurelian Walls at the behest of Emperor Honorius. But Pope Nicholas III had the Passetto del Borgo built (which links the castle to the Vatican City).

In 1367 the keys of the castle passed into the hands of Pope Urban V.

Since then the Vatican takes care of it and today the castle houses the Archive and the Vatican Treasury.

You will find Castel Sant’Angelo in Via Lungotevere Castello, 50. Catch the G bus from the Termini Station and in 20 minutes you’ll be there! 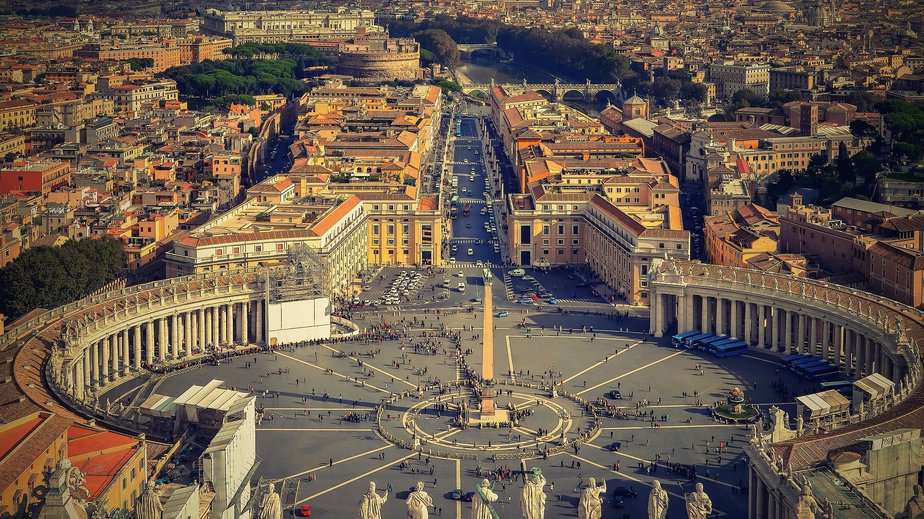 St. Peter’s Square or Piazza San Pietro is the beating heart of the entire Vatican City.

In 1656 Bernini designed and created this architectural masterpiece. The elliptical square enclosed by four rows of columns presents a stunning colonnade. On top of the colonnade, you will find 140 statues depicting saints, martyrs and popes.

Close to the obelisk, you will find a stone placed on the floor. If you stand on it you will be able to see a single row of columns instead of four, creating an amazing visual effect.

The square is full of many optical effects, designed by Bernini. The purpose is to guarantee a uniform perspective on the entire structure.

The main entrances to St. Peter’s Square are located in Via della Conciliazione and in Via di Porta Angelica.

Take the Metro A – Battistini and get off at the Ottaviano stop. If you prefer, catch the 64 bus from Termini Station and in 29 minutes you’ll be there! 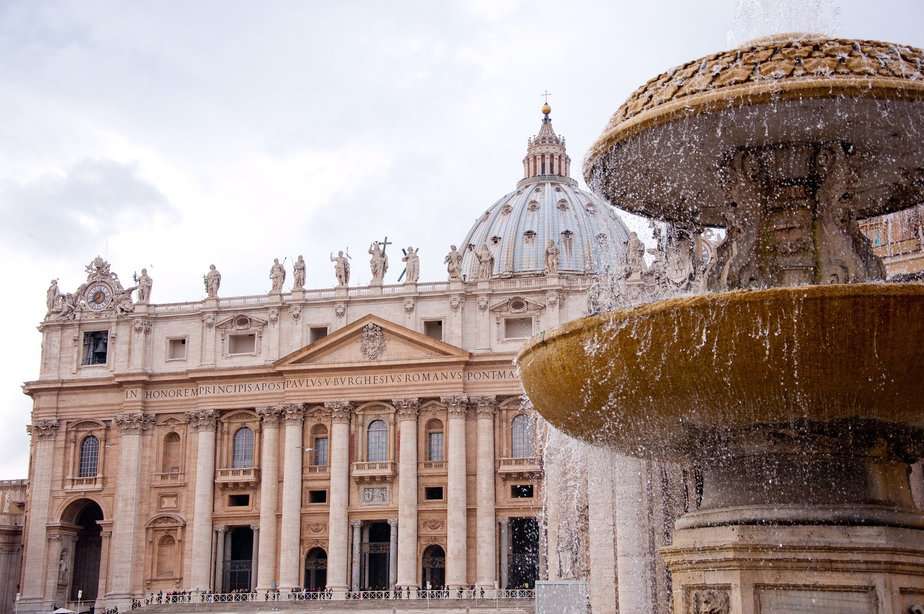 After a wander around St. Peter’s Square, you are ready to visit the Basilica itself!

Once inside you can admire:

Now that you’ve come this far, you can admire Michelangelo’s dome from inside with its 551 steps.

If you prefer to climb to the top you have two possibilities:

Step into the Vatican Gardens 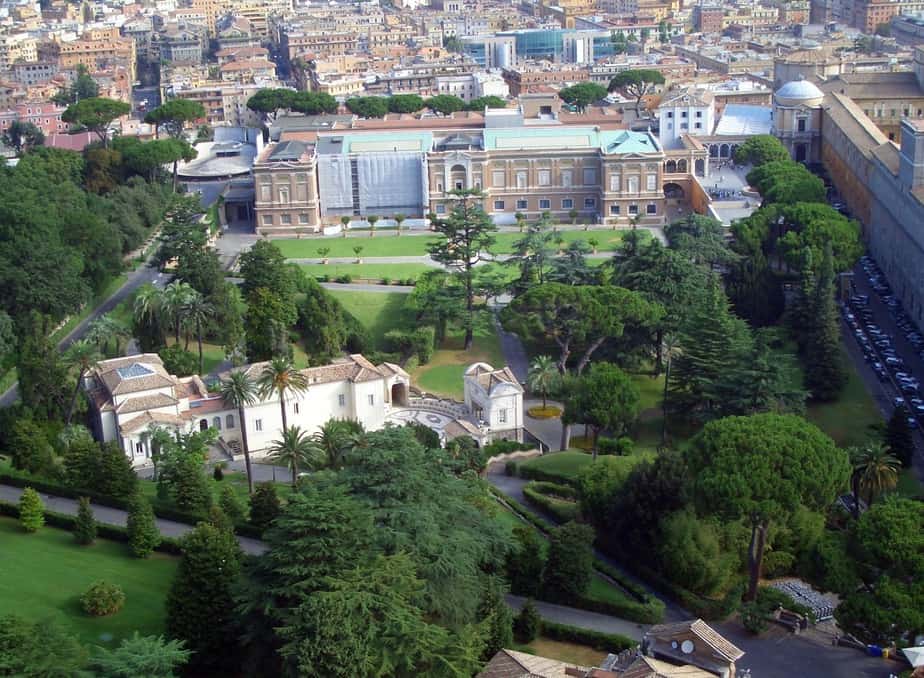 Inside the smallest state in the world known as the Vatican City, you will find the Vatican Gardens.

This beautiful place occupies 23 hectares of the entire surface of the territory. During the walk in the gardens, you will find around 570 works of art. But it does not end here! You will find buildings, fountains and places completely wrapped up in vegetation.

In 1279 Pope Nicholas III requested an orchard, a lawn and a garden and also a wall to protect his private house. Thanks to him you will be able to admire some stunning spaces; you’ll feel like you’re in the countryside!

Take the Metro A direction Battistini and get off at the Ottaviano stop.

The Vatican Gardens tour lasts two hours and the ticket price is € 33. The opening days are Monday, Tuesday, Thursday, Friday and Saturday.

You will find more information here on their website

Drop by the Vatican Museums 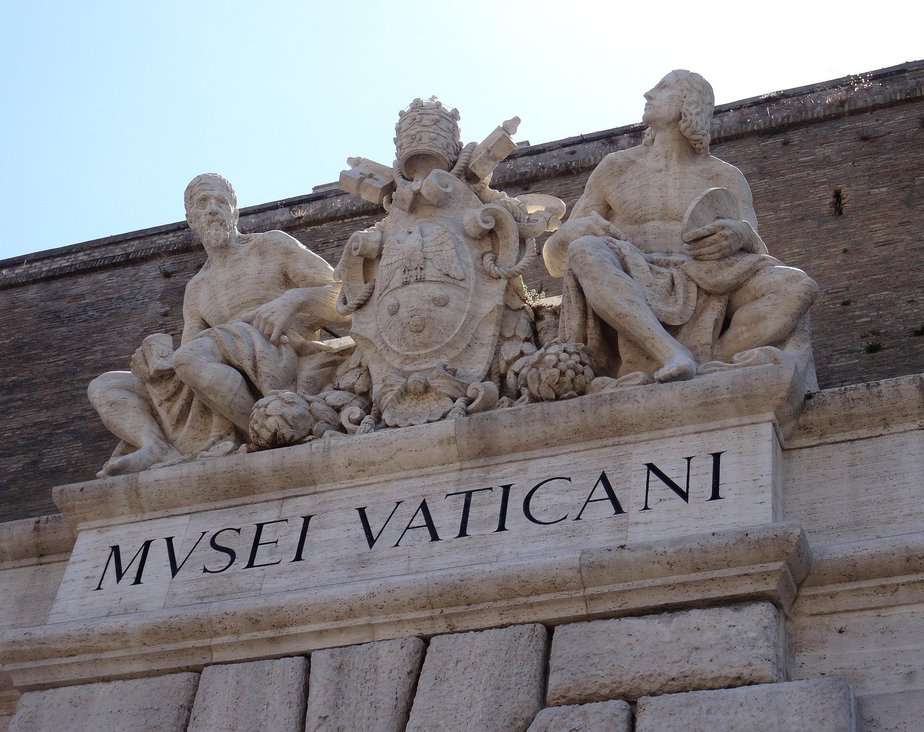 At the Viale Vaticano n. 6 in Rome, you will find the Vatican Museums with the collections accumulated by the popes over time.

Here you will find magnificent sculptures and paintings. Without forgetting some historic globes and beautiful maps from all over the world.

History tells us that the first work of art that gave life to the Vatican Museums was the statue of the Laocoon.

The statue came to light on 14 January 1506 in a vineyard near the basilica of Santa Maria Maggiore in Rome.

Pope Julius II brought the statue from the landowner and exposed it to the public.

But it doesn’t end here!

Don’t miss the Sistine Chapel and the apartments frescoed by Raphael and Michelangelo!

The Sistine Chapel built between 1475 and 1481 is the main chapel of the Vatican.

Michelangelo frescoed the vault and the Last Judgement, while Botticelli, Perugino, Ghirlandaio and Pinturicchio frescoed the lateral walls.

If you want more information about the Vatican Museums check their website here!

Every last Sunday of the month admission is free while the other days the ticket costs € 17.

Head straight to the Janiculum Hill 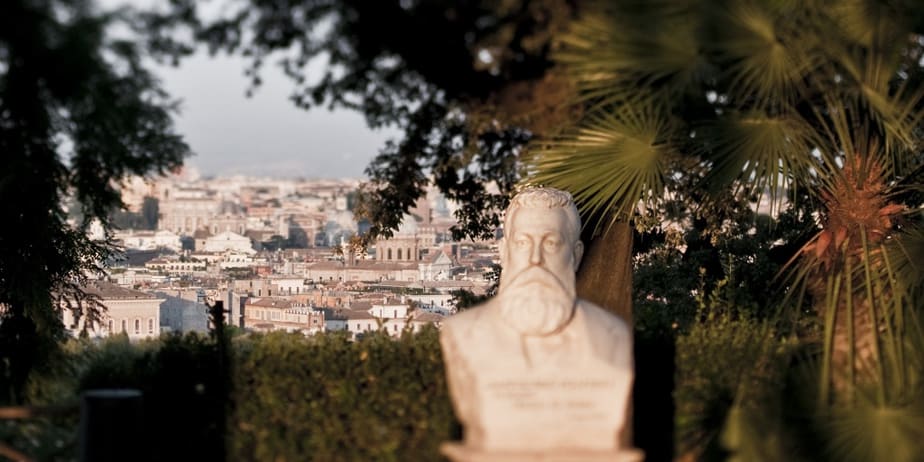 View from the Janiculum by MarkusPark – Wikimedia Commons

Janiculum Hill is a very important historical place in Rome.

From here Garibaldi attacked the French troops who entered the “eternal city” in 1849.

As you walk by, you will notice some statues dedicated to the patriot Garibaldi and his wife Anita. Furthermore, you will find a multitude of busts of the patriots who contributed to the unity of Italy.

But it doesn’t end here!

In this beautiful place you will find also:

To reach the Janiculum in Piazzale G. Garibaldi take the 870 bus from Termini and in 30 minutes you’ll be there.

Places to See the Best Views of Rome at Night