Where is Napoleon Bonaparte buried? 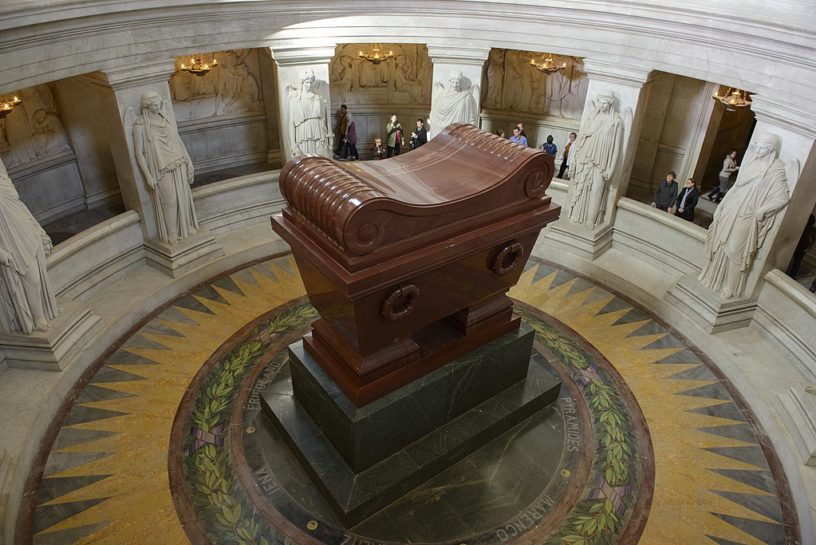 Where is Napoleon Bonaparte buried?

On May 5th, 1821, Napoleon died on the island of Saint Helena, located in the southern part of the Atlantic Ocean, where he had lived in exile since 1815. Consequently, his body was buried there. Yet, nowadays, one can pay tribute to the Emperor in none other than… Paris. Where exactly is Napoleon buried? And how did he end up in the capital? Let’s find out!

Where can you find Napoleon’s grave in Paris? 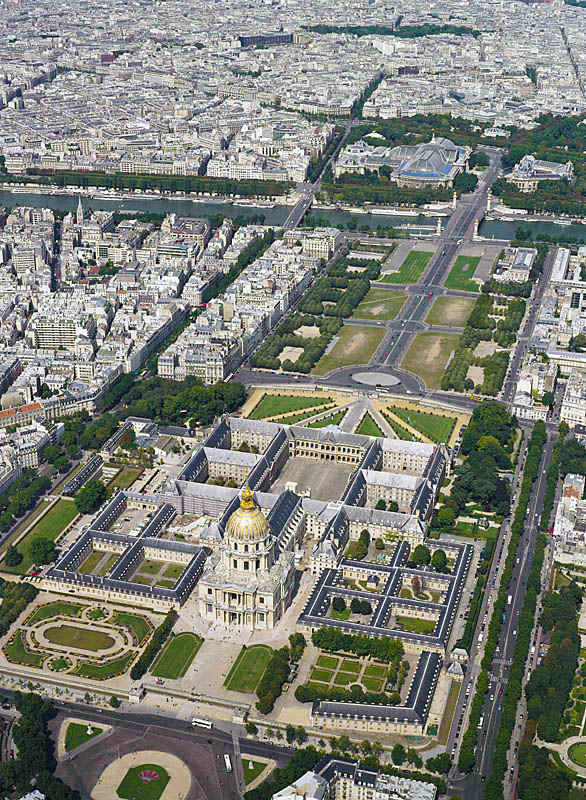 Aerial view of the Hôtel des Invalides and the Esplanade in Paris, 2002. Photographed by Eric Gaba. Sourced from Wikipedia.

The very first time I visited the hôtel des Invalides, I came without much expectation nor knowledge of what I would find there, apart from the historical military collections its museum held. As I progressed through rooms and corridors exhibiting medieval armors or Second World War tanks, my journey led me to enter within the Invalides’ dome. 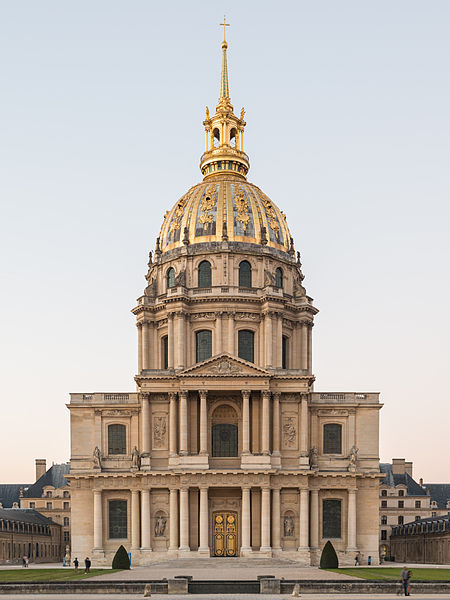 The Dôme des Invalides, 2014. Photographed by DXR. Sourced from Wikipedia.

Impossible not to marvel at this stunning royal church. On top of its beautiful architecture, the place contains impressive monuments and tombs, which pay tributes to great figures of France’s military history throughout the centuries. But it seemed to especially focus on honoring generals who fought next to Napoleon as well as his family. As I stood in front of his brothers’ graves, Jérôme’s and Joseph’s, it dawned on me: could it be where…?

I took the stairs to go down into the church’s crypt and… yes, it was. Here lies Napoleon Bonaparte, within a majestic marble tomb, put in the middle of a circular room, underneath the dome. The vault was decorated with gorgeous columns, statues, and frescoes. The surprise made the whole monument even more stunning to me. Not to mention the history behind it… 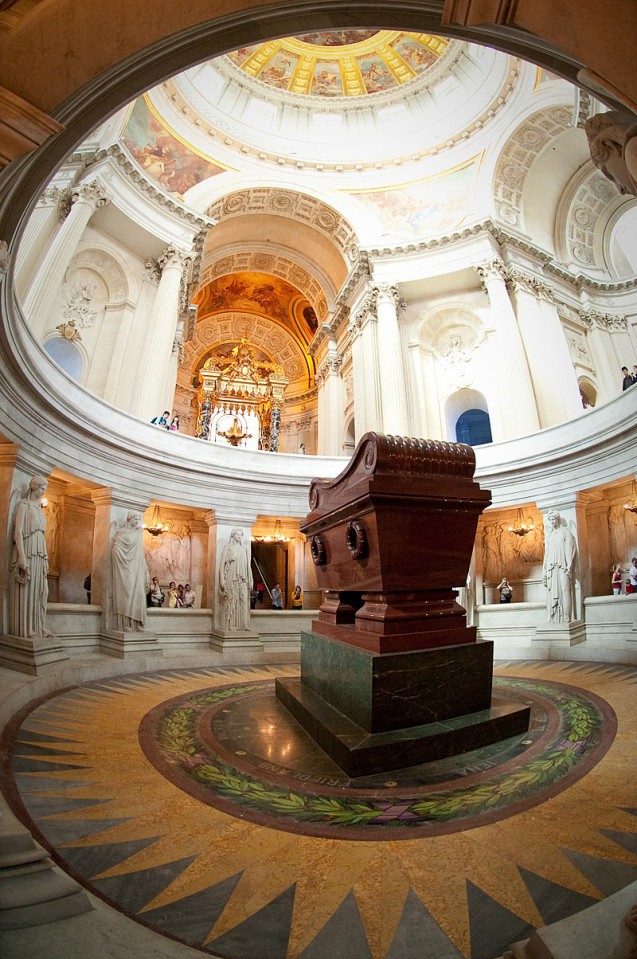 Napoleon’s tomb. Photographed by Josh Hallett in 2009. Sourced from Wikipedia.

Why did Napoleon come to be buried in the capital?

Where Napoleon was first buried, in the Vallée au Tombeau on the island of Santa-Helena. 2014. Photographed by David Stanley. Sourced from Wikipedia.

As we have established, Napoleon died thousands of kilometers away from Paris, in the middle of the Atlantic Ocean. His body remained buried on the island of Saint Helena for about twenty years, though his will stated he wished to be buried “along the Seine, surrounded by the French people [he] had loved so much”. Truth be told, there had been several attempts to bring his remains back, but either the British government, owner of the island, had refused, or the French government itself had deemed it could provoke popular unrest.

Louis-Philippe I, King of the French, Horace Vernet, 1832. Sourced from Wikipedia.

It is only in 1840 that two men decided it was time: King Louis-Philippe and Adolphe Thiers – the government’s Prime Minister. They saw the return of Napoleon’s remains as a strategic move for two reasons. First, on a geopolitical level, they wanted to ease France’s relationships with Great-Britain by collaborating on this topic.

Second, on a domestic level, King Louis-Philippe wished to legitimize his reign and improve his image through the glory of organizing such an important tribute to a figure that people came to be very nostalgic about. The Napoleonian myth was indeed emerging in France, and the monarch tried to benefit from the Emperor’s popularity. Both of these aims actually failed – but the return of Napoleon’s corpse did take place.

How was Napoleon’s corpse brought back from Saint-Helena?

This specific episode of French History is known under the name “Le retour des cendres” – which literally translates to “The return of ashes”, though “ashes” here refers more generally to Napoleon’s remains, as his body wasn’t cremated.

In early July 1840, two French ships sailed across the Atlantic to reach Saint-Helena. In one of them, a chapel had been purposely built to welcome the casket, decorated with broideries showcasing the deceased emperor’s symbols: bees and eagles. After a 93-day journey, Napoleon’s coffin was dug out from the Vallée du Tombeau (the Tomb’s valley) and carefully brought into the ship’s chapel.

Return of Napoleon’s ashes, on board of la Belle Poule, Eugène Isabey, 1842. Sourced from Wikipedia.

Eventually, the Emperor came back in France. In another boat, his coffin went up the Seine until it reached the land on December 14th. The dock where the ship stopped, then called le quai de Courbevoie (nowadays quai du Président-Paul-Doumier) actually still displays a commemorative plaque recalling the event.

Napoleon’s remains are delivered by the small ship La Dorade 3, which took him to Courbevoie, a suburb of Paris, Henri Félix Emmanuel Philippoteaux, 1867. Sourced from Wikipedia.

On December 15th, a huge crowd braved the winter cold and gathered to see Napoleon’s gold hearse go from Neuilly’s bridge to the Invalides, passing by the Arc de Triomphe and the Champs-Elysées. King Louis-Philippe, the government, the deputies and the military senior officers all awaited in the Invalides’ church. Once the coffin entered the Dome, a funeral ceremony took place, while Opera singers sang Mozart’s Requiem. The Invalides’ dome remained opened until Christmas, so that the people could pay tribute. 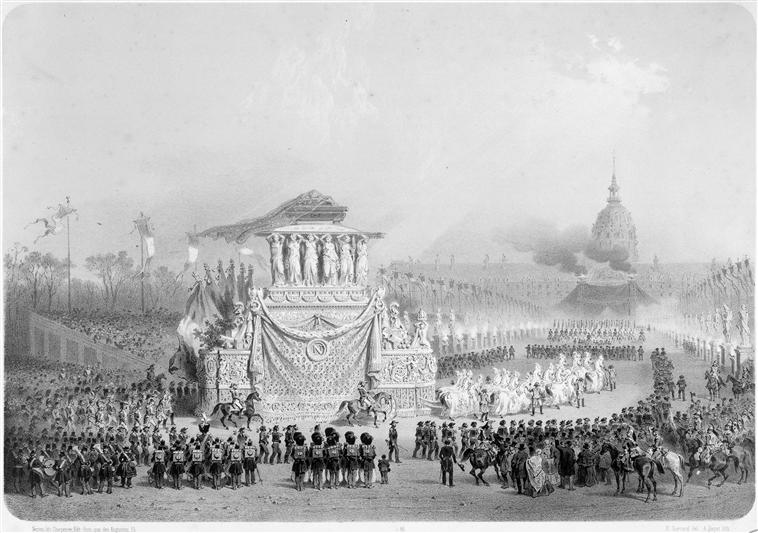 Why was Napoleon buried in the Invalides out of all places?

The matter actually sparked a true debate at the time; the choice of the Invalides was not an obvious one. Some defended that Napoleon should be buried within the Panthéon among the Nation’s great men and women, others underneath the Arc de Triomphe, built to commemorate his military victory in Austerlitz. It was even discussed to put him in the Basilica of Saint-Denis, meaning the necropolis of France’s kings!

Eventually, King Louis-Philippe and the government settled with the hotel des Invalides. The building gets its name from the fact it was originally constructed under Louis XIV to welcome soldiers disabled on the battlefield. Some of the highest military authorities have their headquarters here. It became throughout history a necropolis meant to honor great military figures. This environment fitted Napoleon, considered as an incredible strategist as well as a remarkable head of the French army. 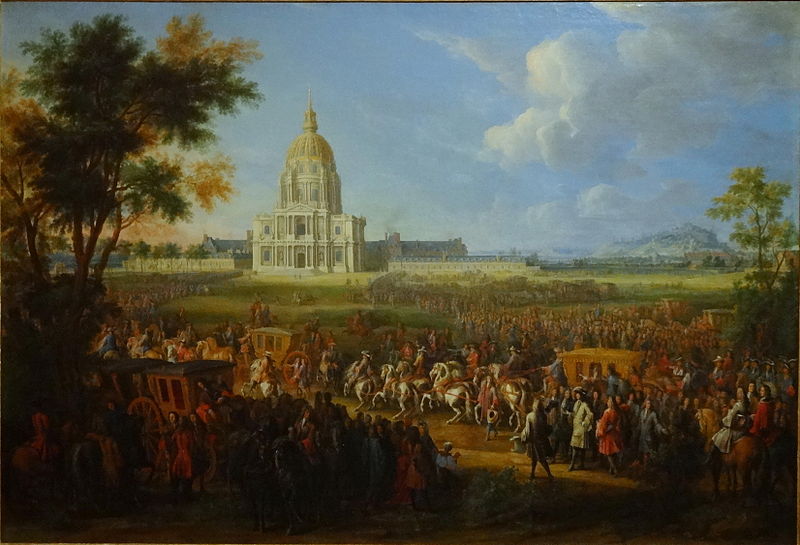 In addition, such a choice allowed the construction of a magnificent and imposing tomb for the Emperor. The architect Louis Visconti built a gigantic crypt underneath the church, whose ceiling would be open so that the coffin could be seen from above. The tomb sits on a granite floor where the names of Napoleon’s battles are written in mosaic.

Tomb of Napoleon, 2012. Sourced from Wikipedia.

Twelve marble statues representing Victory surround and watch over the grave. Behind them, a circular gallery contains marble frescos celebrating Napoleon’s rule. This masterpiece took many years to be built, so that it is only in 1861 that Napoleon truly entered his vault, as we can visit it now. To get your tickets to see it for yourself, click here.